The generals surveyed their chosen battleground and the uncountable, disposable dead littering the blasted landscape like so many hailstones after a violent summer’s storm, and wondered aloud, “What devastation hath these powerful magicks wrought?” 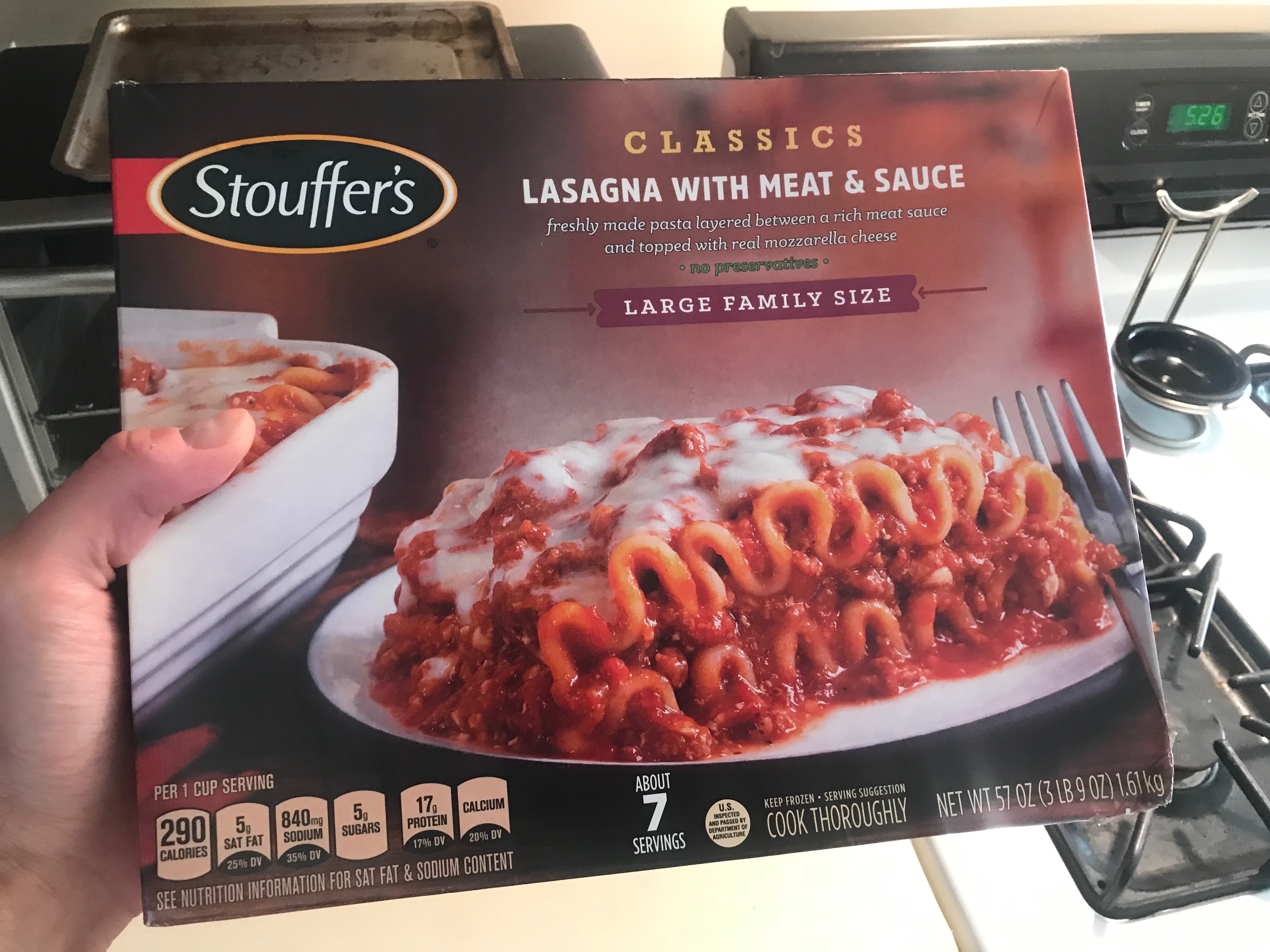 The air smelled of garlic as four mages Gathered again at Moss’ Logan Square stronghold for the June installment of our Neverending War. The evolving conflict stipulated no infinite combos for the night’s gaming and thus Time Vault and Basalt Monolith were banished. These battles would be fought and won in the trenches and in the skies via illicit incantations uncovered from forgotten spelltomes. The combatants and their generals assembled hence: 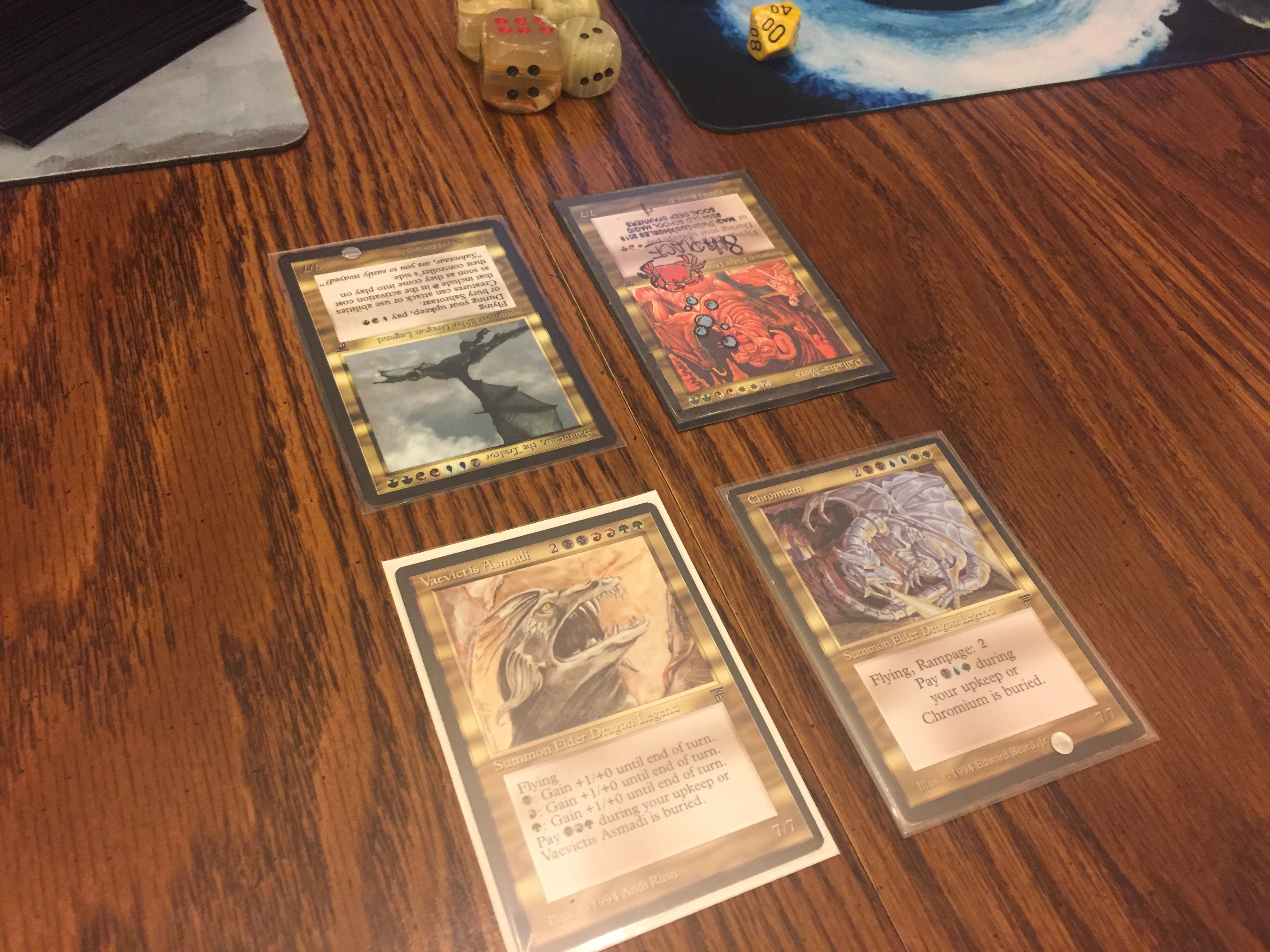 We filled our bellies with a pre-battle Italian feast (lasagna, garlic bread, antipasta + chopped salads) procured by Moss from the deli and freezer sections at Tony’s Finer Foods. After clearing the plates and crumbs, we shuffled our stacks and dove headfirst into OS-EDH to the soundtrack of stoner rock band, Greenleaf. Carter went supernova out of the gates, using Moxen, Timetwister, Sylvan Library, Time Walk, Mana Flare and Recall-Timetwister to race ahead with Stangg, Stangg Twin and Gerrard of the Closed Fist as potent threats. The Twisters had binned two Nev’s Disks and left Marty with a grip of seven lands. We had ourselves a target! The rest of the crew ganged up to subdue our Meatball: Moss landed Infernal Medusa, Nova Pentacle, Preacher, Time Elemental and Greater Realm of Preservation to mount a formidable defensive front. Marty took a beating early, but summoned General Palladia Mors to bolster his lines before unleashing Cyclone. Shane made use of Tawnos’ Coffin and Royal Assassin to battle the assault yet eventually succumbed to Carter’s blitz as the evening’s first casualty. Undaunted, Shane still graced us with the Ultimate Old School MTG card, Pyramids, forever cementing his status as the Grand Pharaoh of Pimp. 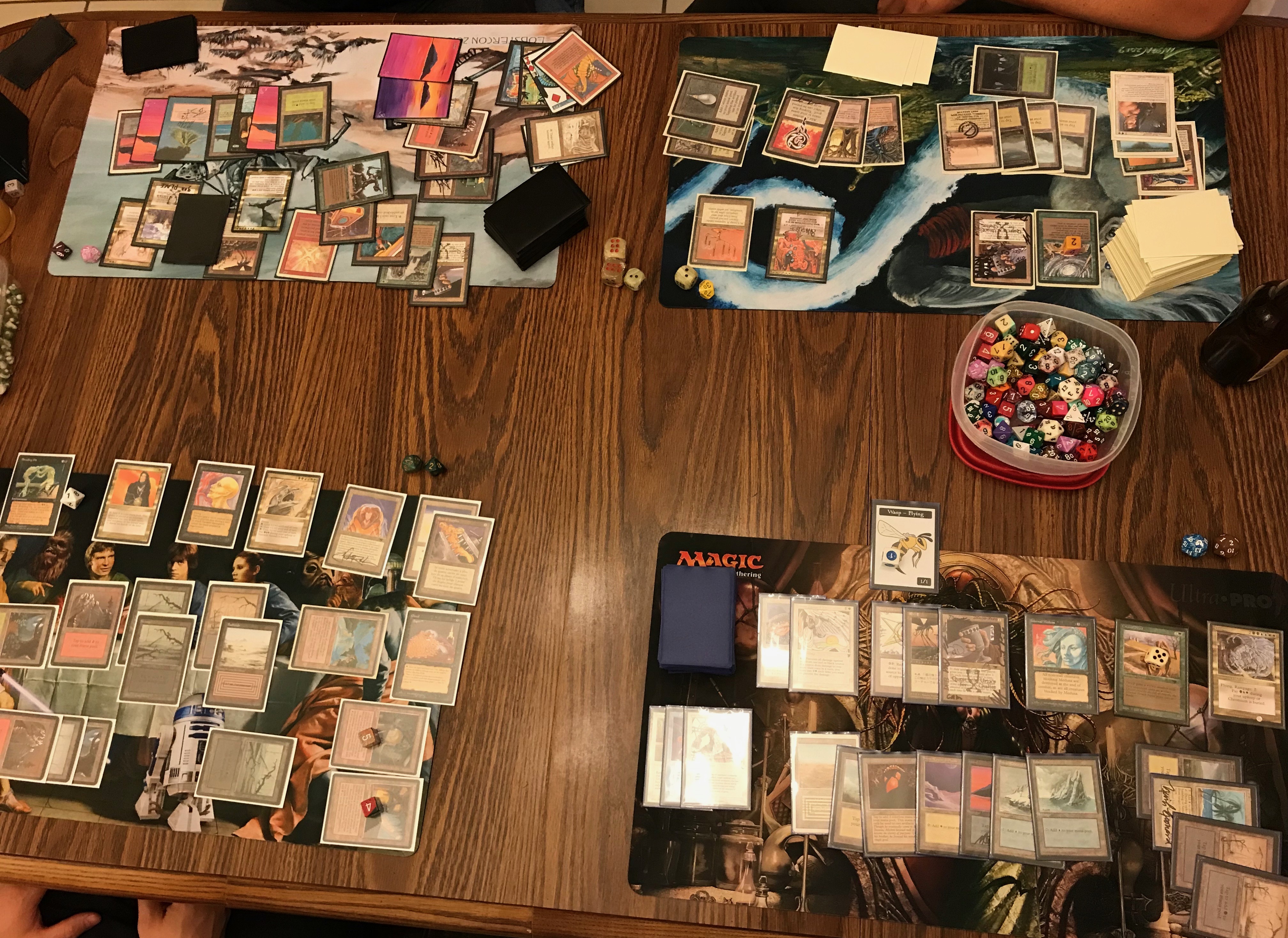 Interestingly, as we settled into the mid-game, all three remaining players were packing Urza’s Chalice! All four of combatants attended the Quest for Urza’s Chalice in California this past winter and so were sporting inked copies of this Antiquities chestnut. Another card that saw wide use was Candelabra of Tawnos. Both Marty and Carter cast them (Moss had one among his 100) and made potent use of Candelflare. The plot thickened, however, when Marty resolved Power Surge. In this supposed combo-less affair, we’d stumbled upon a forgotten supertechnology, using Candelabra to untap an opponent’s lands before the start of their turn to maximize Power Surge damage! Carter and Marty had exchanged haymakers all game, mostly because Moss ensconced himself behind high fortress walls, and now Marty exacted his revenge, making Carter pay for an earlier punt where he could’ve polished Marty off. 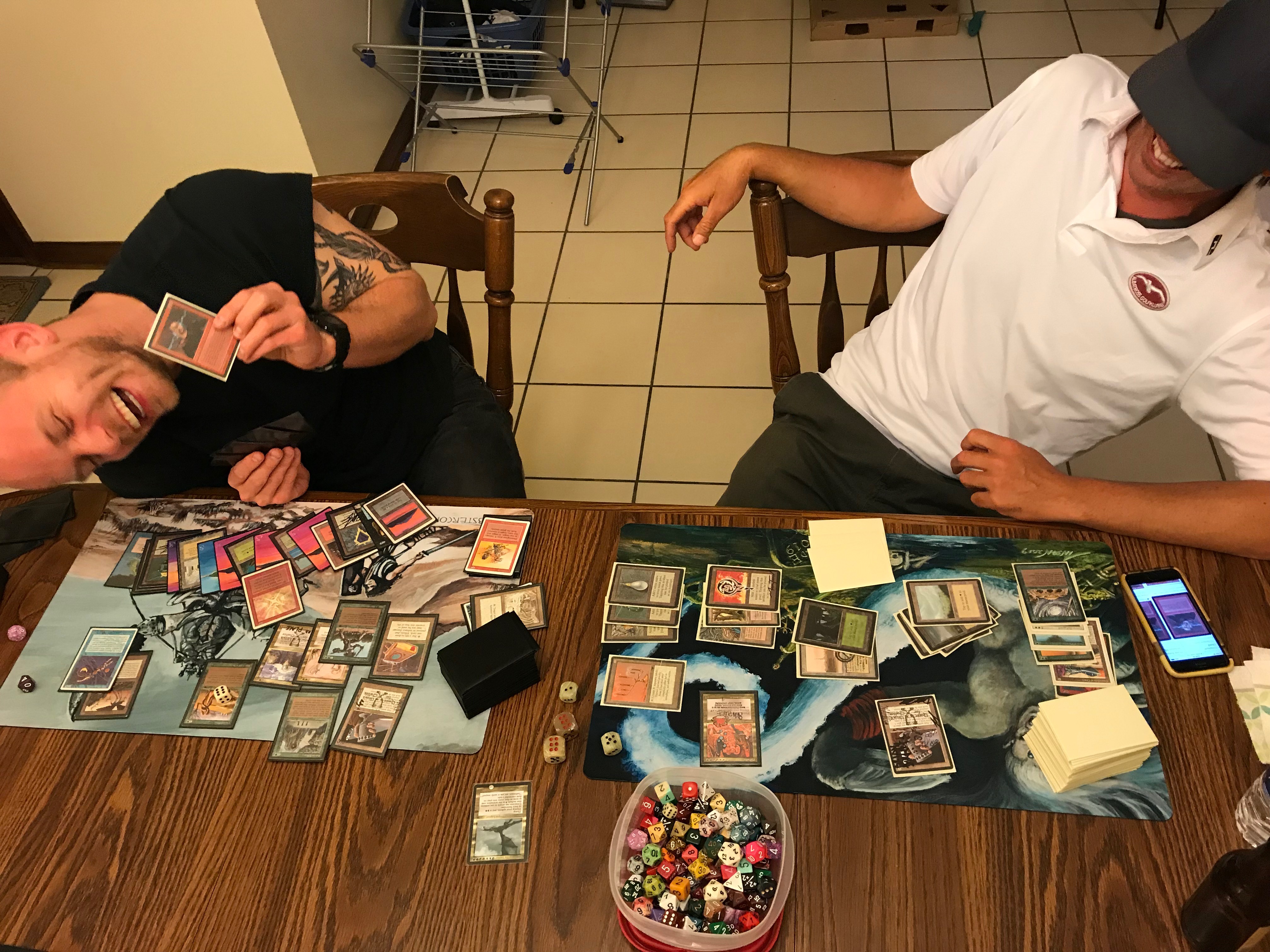 Marty slew the Meatball but was left depleted. Moss punched in with the Deathtouch-enabled Infernal Medusa, stoning Palladia Mors, before Marty resolved an Armageddon, one of several extra-legal plays made on the evening as the wizards haggled over ban list. Lands were laid waste and Chromium returned to the Command Zone but Moss still had the initiative with a swarm of Hive tokens. Marty accepted his fate, taken straight from the pages of The Wicker Man. Moss captured Game 1.

We’d spun Pink Floyd “Animals,” being subjected to Meatball’s keening, singalong wail, and moved into “Ass Cobra” by Turbonegro before landing on Nirvana’s “Incesticide” during the follow-up game. By then we were deep into the mid-game, reset to one land, zero creatures. Moss and Meatball had previously run bone-dry on lands while Marty ran roughshod with a Turn 1, Lotus-powered Johan. Then he built on that advantage assembling an Agrivian Archaeologist-Chaos Orb lock. Moss consulted with Demonic Tutor whose lesson was a devastating Balance. Carter followed with Titania’s Song, resulting in the evening’s most-entertaining (mis)play where he cast Remove Soul onto Marty’s would-be 5/5 Gauntlets of Chaos.* 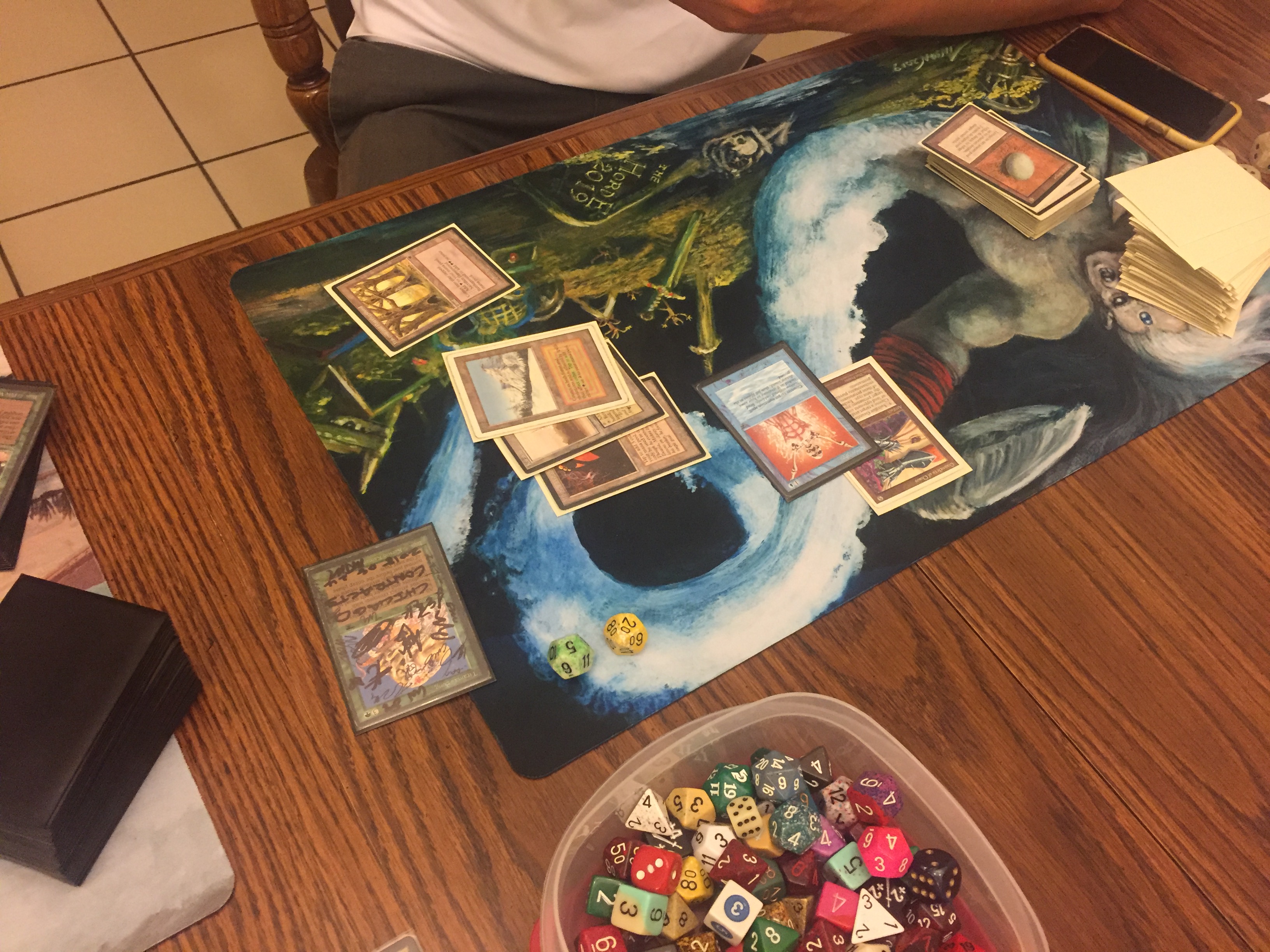 (*Upon further review, this shouldn’t have been a legal play because Gauntlets isn’t an Artifact Creature on the stack and therefore isn’t counterable by Remove Soul, but it makes for good storytelling nonetheless.)

Nobody had advantage, though Moss paced the field at 56 life thanks to early work by Ivory Tower and Chalice. Carter then raised a call-to-arms for the field to gang up on their talented chef and gracious host. Shane cast Eureka, dropping Aladdin’s Ring. Moss dropped Serpent Generator. Marty played a land. Suddenly, Meatball went ham, dropping Shivan Dragon, Sahrotaar (in-hand because of an earlier Time Elemental bounce by Moss), Book of Rass and Gerrard! Marty again cast Power Surge, plus Karma, and the field made swift work of Moss, dealing 40+ points of damage in two rounds. Sensing his doom, Moss Flooded Marty’s 9/9 Angry Mob, then launched a 10/10 Dakkon Blackblade-led offensive, crippling both mages. 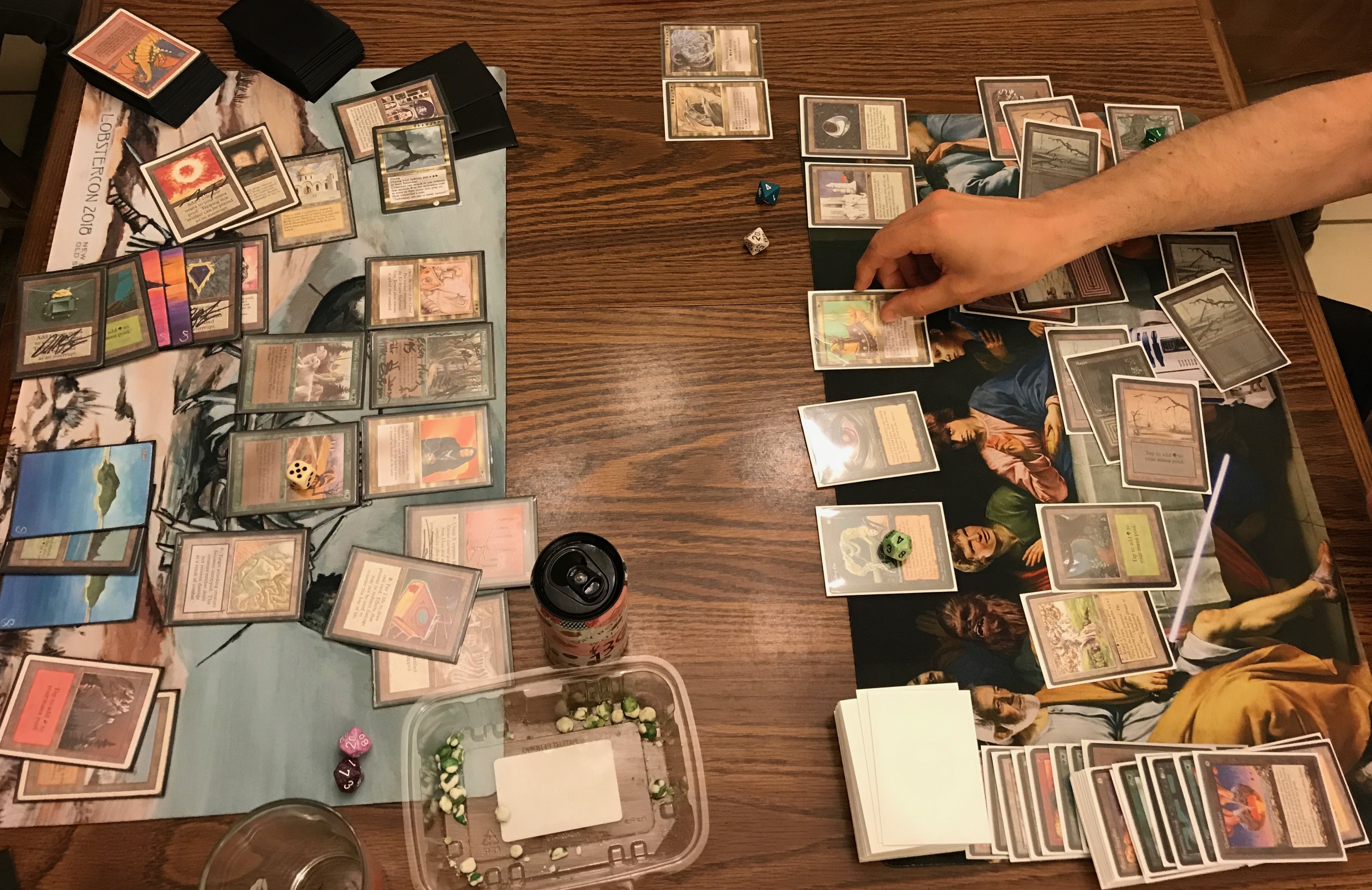 The turn then passed to Shane, who launched a near-lethal assault on Marty, but twin Mazes of Ith (Marty’s + Carter’s) kept the ailing wizard afloat, albeit it at one life. Then, with his final act, Moss used a remaining Trike counter to deliver the ol’ slap-n-pop, the coup de grace, to Marty. Carter bulldozed Moss on the next turn and we were left with Meatball vs. Shane. The cagey veterans settled into a back-and-forth, Carter working a creature advantage. Shane then pulled his namesake Semmens Maneuver with Mirror Universe, followed by Hurricane for the win. The dust settled and the Jund wizard prevailed, capturing Game 2, his third such OS-EDH triumph. 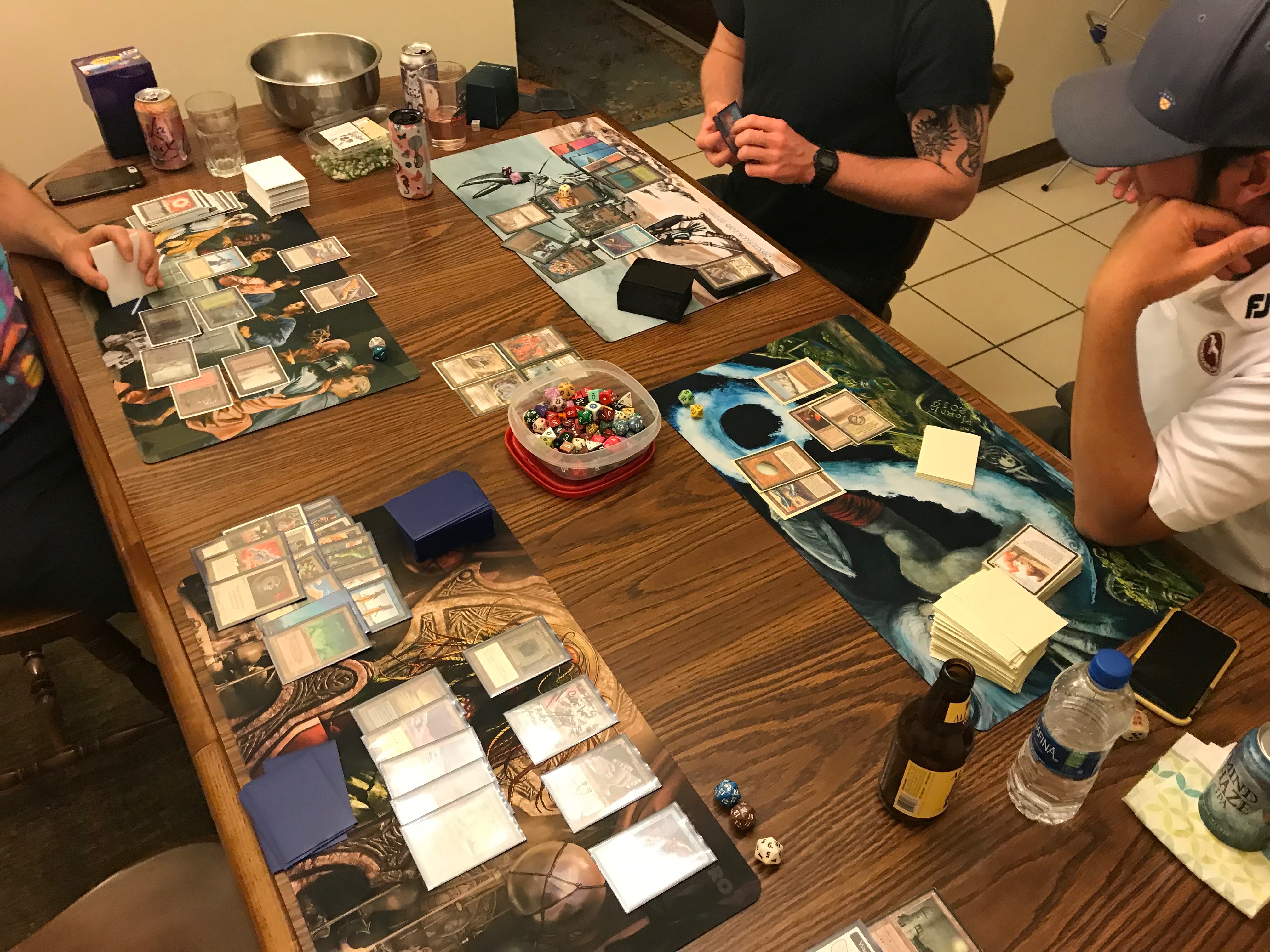 Banning primary combo pieces (Basalt Monolith & Time Vault) for one evening resulted in our games playing much more like Risk, where temporary allegiances, resource advantage and incremental territorial accrual are the keys to success. And just like in Risk, tensions ran high and nerves got raw; this is part of the allure of OS-EDH. In both of the evening’s games, early actors were stamped down and patience prevailed. These games didn’t stall out for too long, however, as there were enough threats to punch through most defensive positions. Both battles clocked in at a palatable 90 minutes. We were pleased to see all four Elder Dragon Legends summoned and relevant and at one point the whole quartet simultaneously soared the skies over the battlefield! Complicated board states, targeting optionality and diverse interactions made for satisfying and entertaining play. It allowed our crew to pursue creative paths to victory. It was an enjoyable respite from the sudden, jarring “everybody’s dead” conclusion of infinite combos.

Plus, who doesn’t love Tokens? 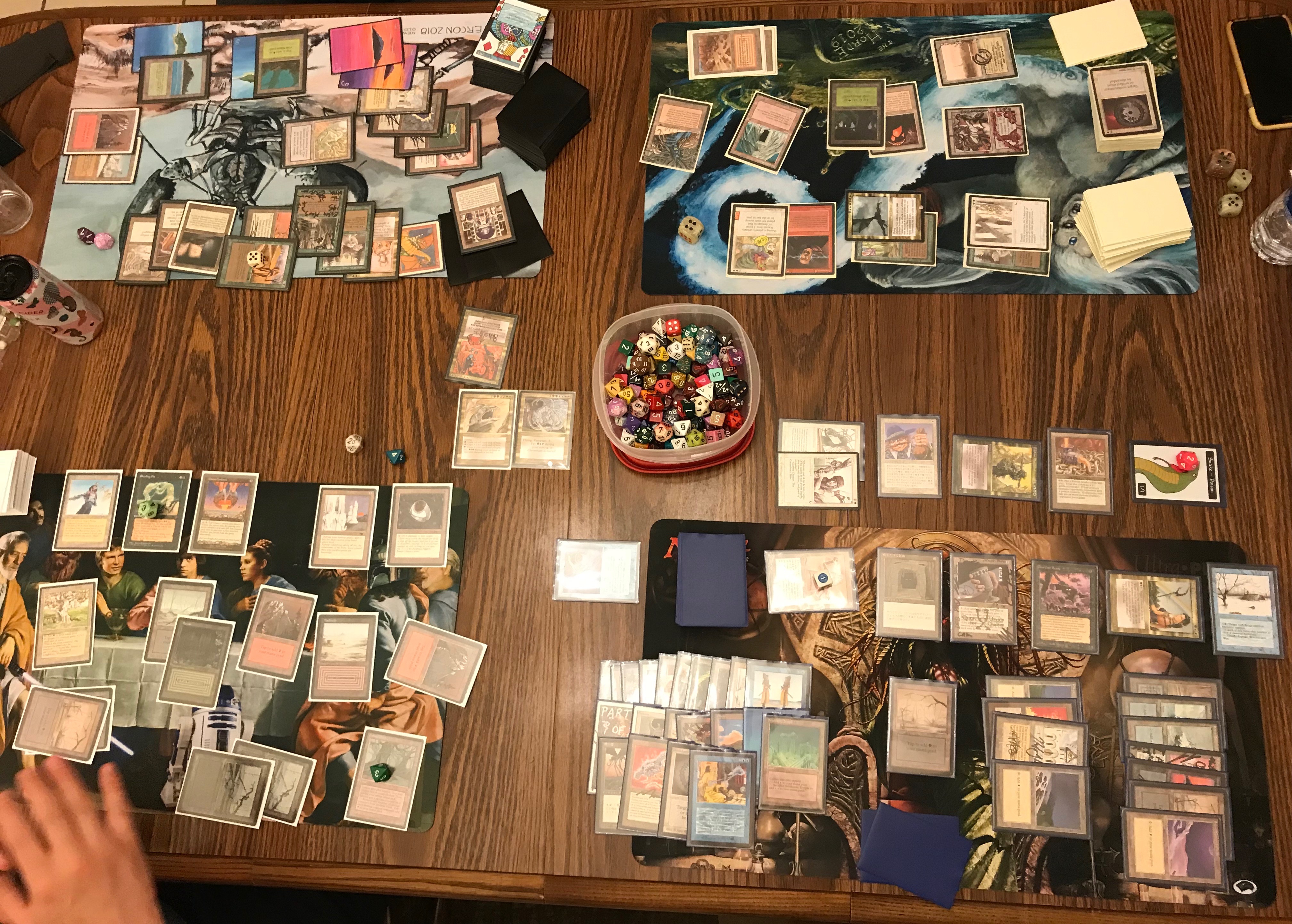 Progress continues in our crusade to Make Creatures Great Again. Here’s a Legends-heavy shoutout to the gnarliest creatures to prowl the battlefield at this Gathering: 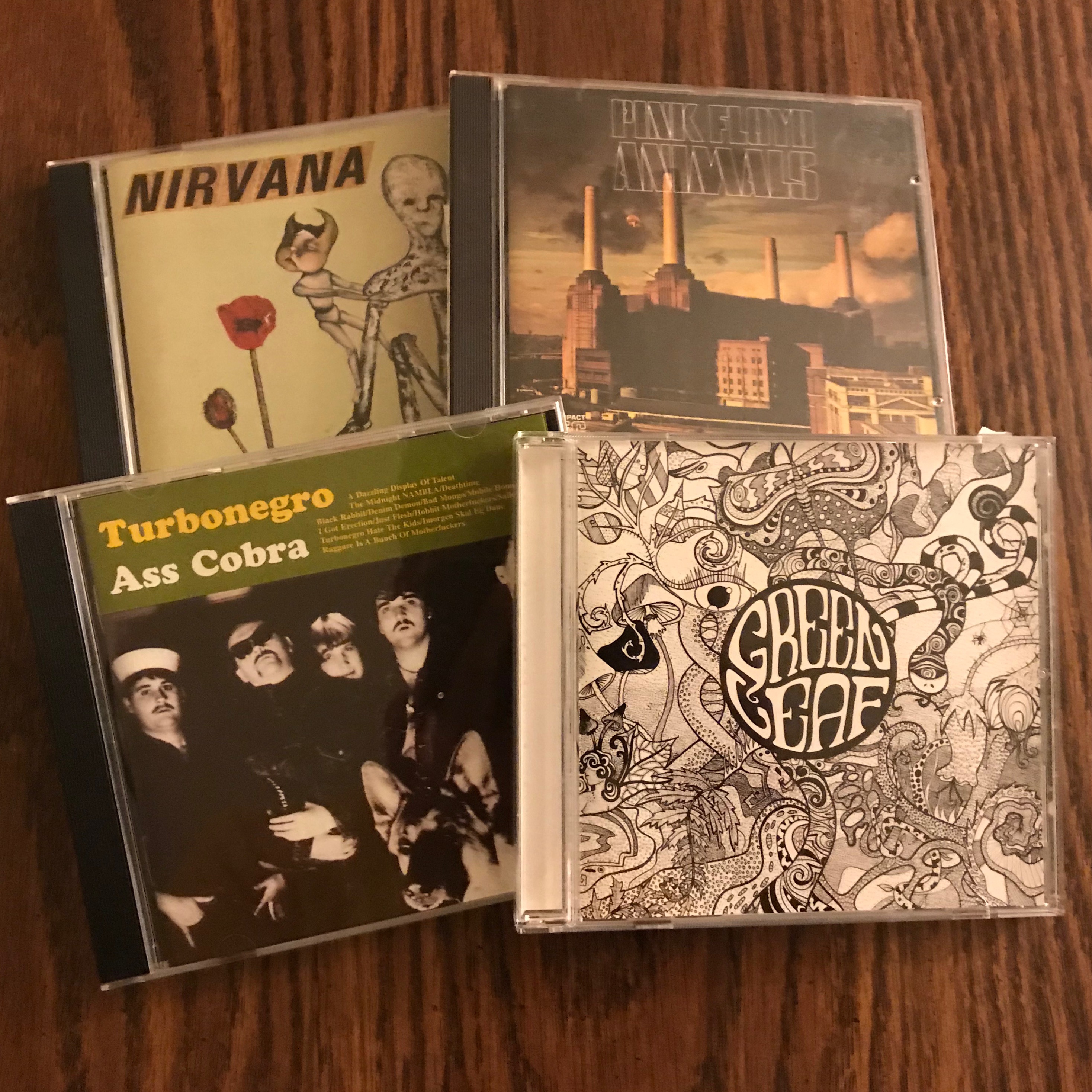 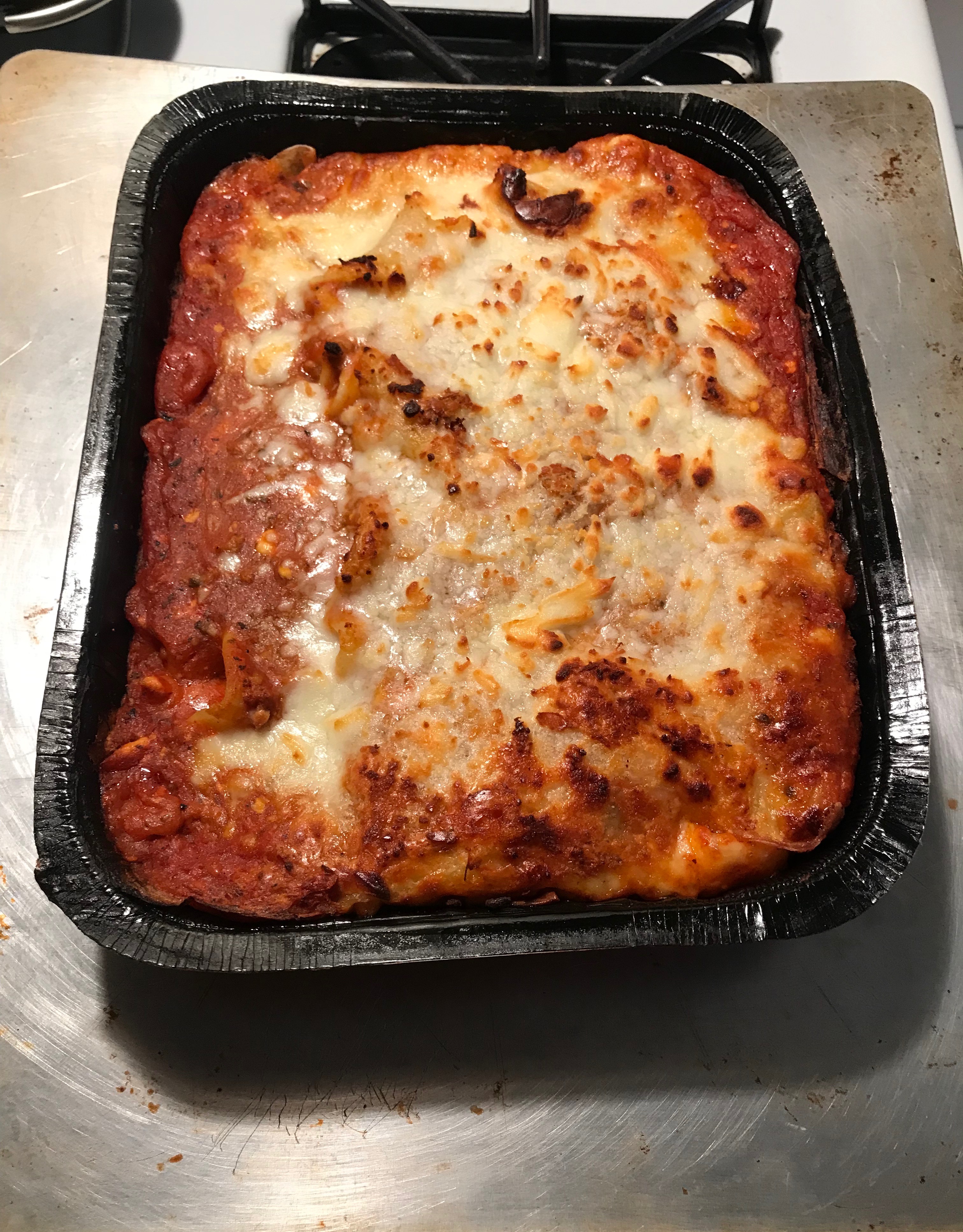 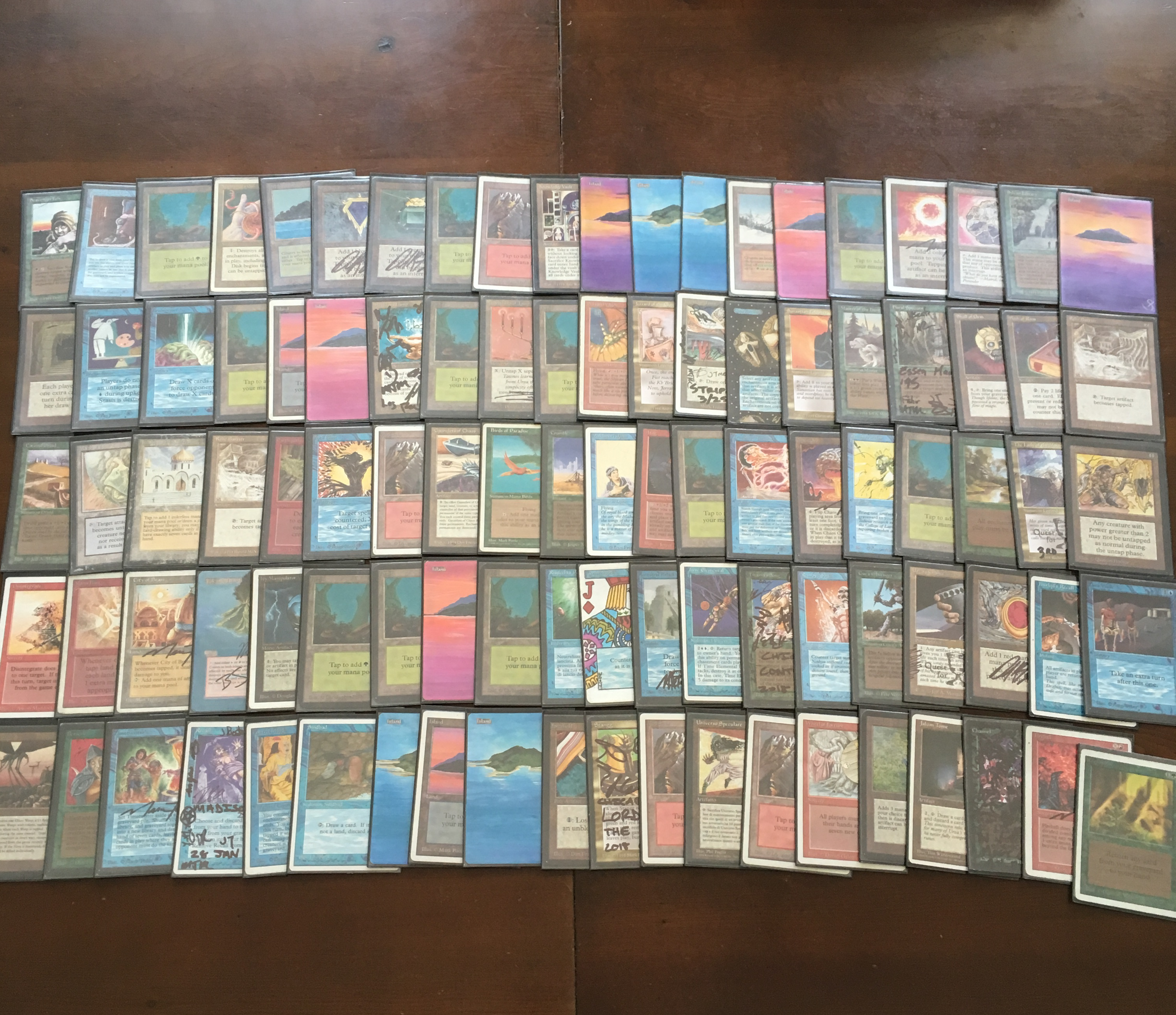 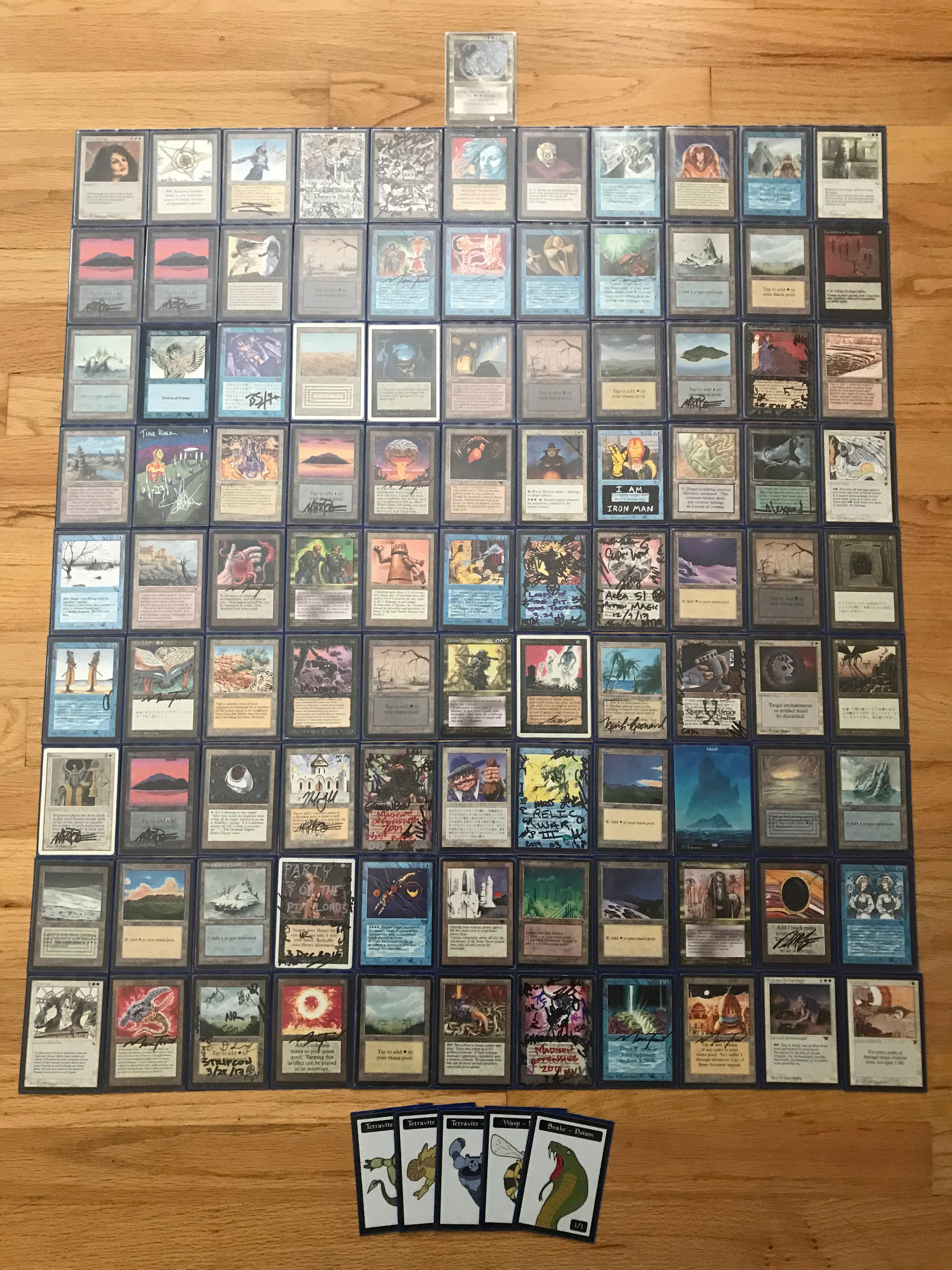 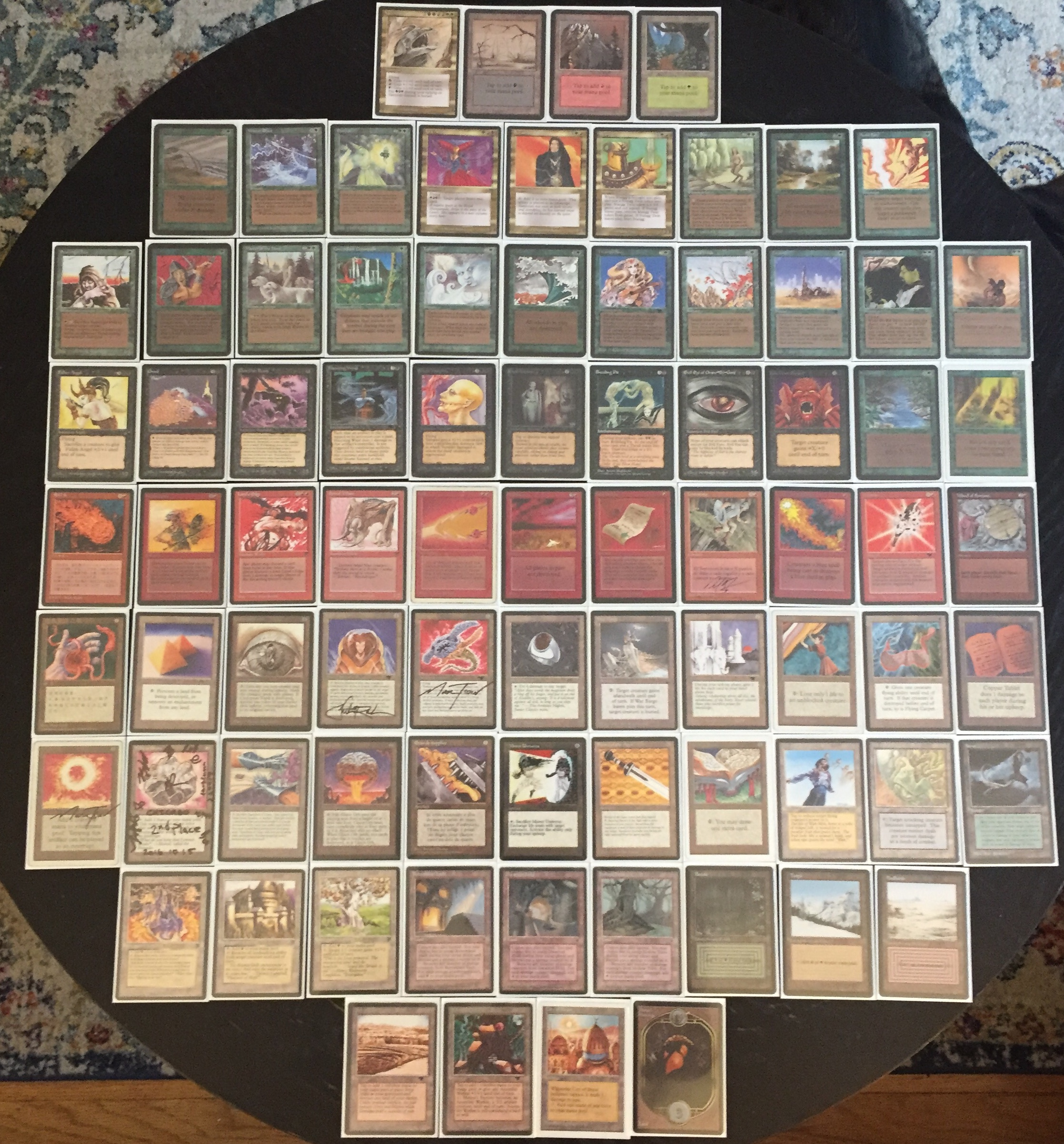 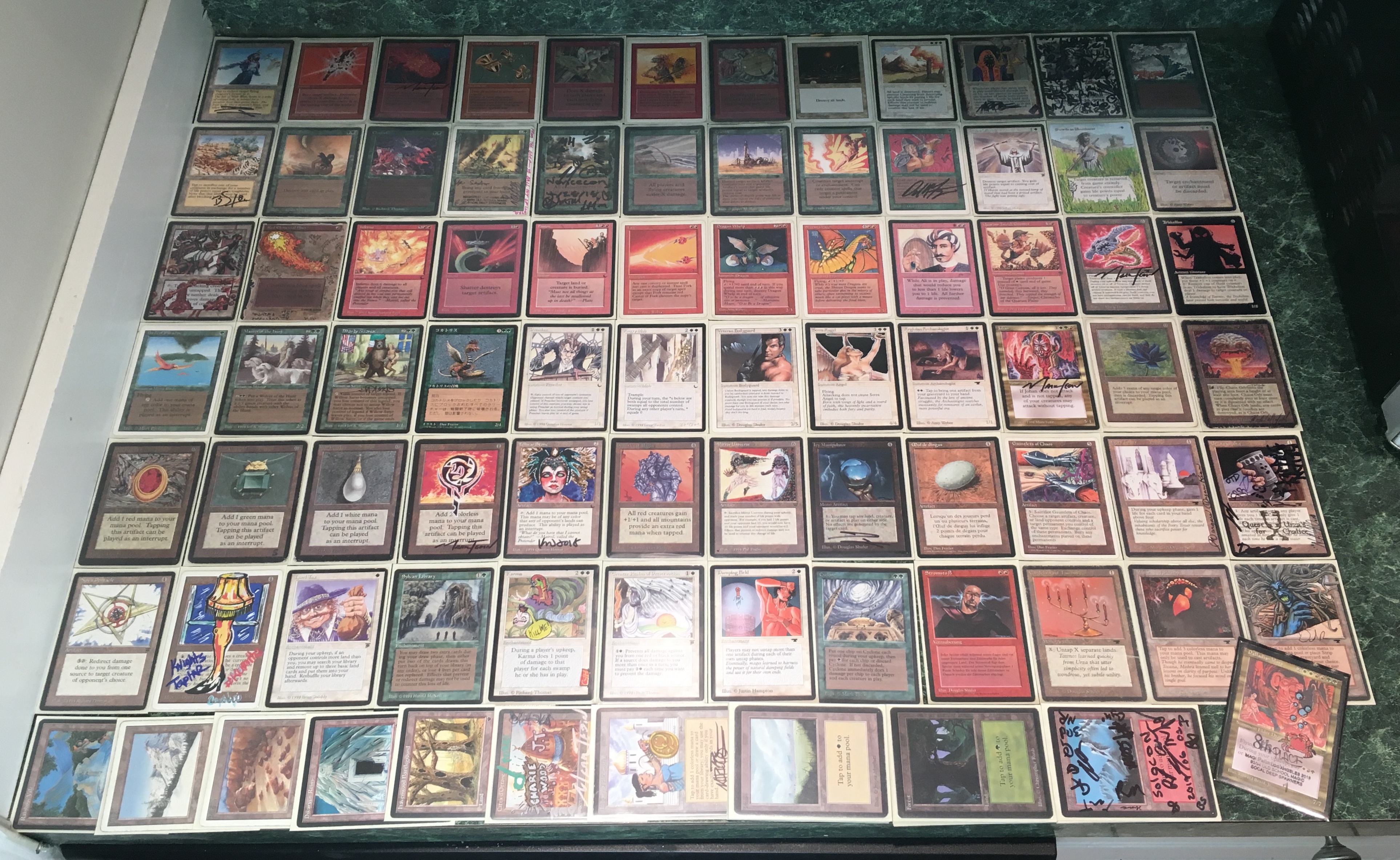