“That’s pretty lucky to get the fourth Survival.”

“Yeah, it sure was. But you keep a hand with Survival and two Enlightened Tutors - given what I thought you would be playing.”

It’s the finals of first Middle School Lords League. Greg Kotscharjan and Lorien Elleman made it through all three trimesters to the top four, and here there are squaring off for all the glory. Greg just lost game one of match one. (More on this “match one” business below.)

Game two, match one. Lorien keeps his seven. Greg keeps seven. We have a game.

Lorien’s deck is nasty. Bant Survival of the Fittest. You have Rootwallas, Arrogant Wurms, Wonders, and Squee. Game one ended with the fourth Survival in play, three Rootwallas, and a Sylvan Safekeeper. That was enough for Greg.

Greg’s on UW control. There are actually no Standstills in this build but everyone keeps calling it Standstill. He tuned it uniquely to this top 4 and omitted his signature card.

So check this out - Lords Leagues. These are awesome. Ten Lords sign up for three two-week trimesters. Each trimester you play three other Lords. And each trimester you get to pick a different deck. Then it is off to a gauntlet of a top four event. The fun part it all is you know your opponents before you submit your deck.

So the top four is down to Greg, Lorien, Bob Agra and Carter Petray. Each Lord came with three decks. You have to win best of 5 matches. Greg and Carter rumbled for almost 3 hours, grinding through all 5 matches before Greg emerged victorious from the rubble.

Lorien resolves a Loyal Retainers (!) to get back an Akroma. Greg’s got some angels from Decree of Justice. This game is sick. 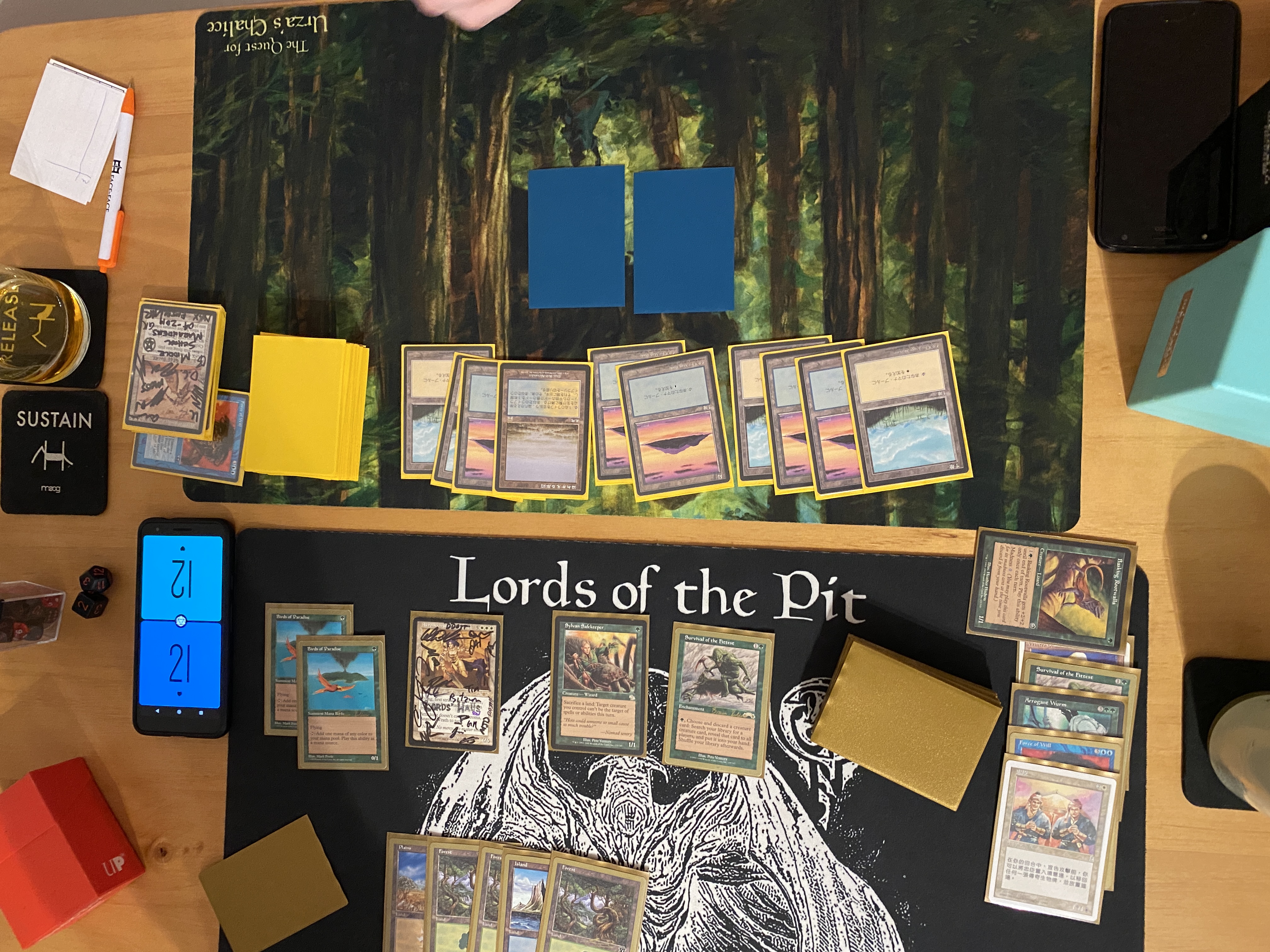 A few minutes later, and game two of match one is over. Akroma too strong. They reach for new decks.

On the other side of the room, Carter, Bob, and Nathan are trying to figure out how Pioneer works. There are two identical Mark Poole signed Islands casting two identical copies of Opt. 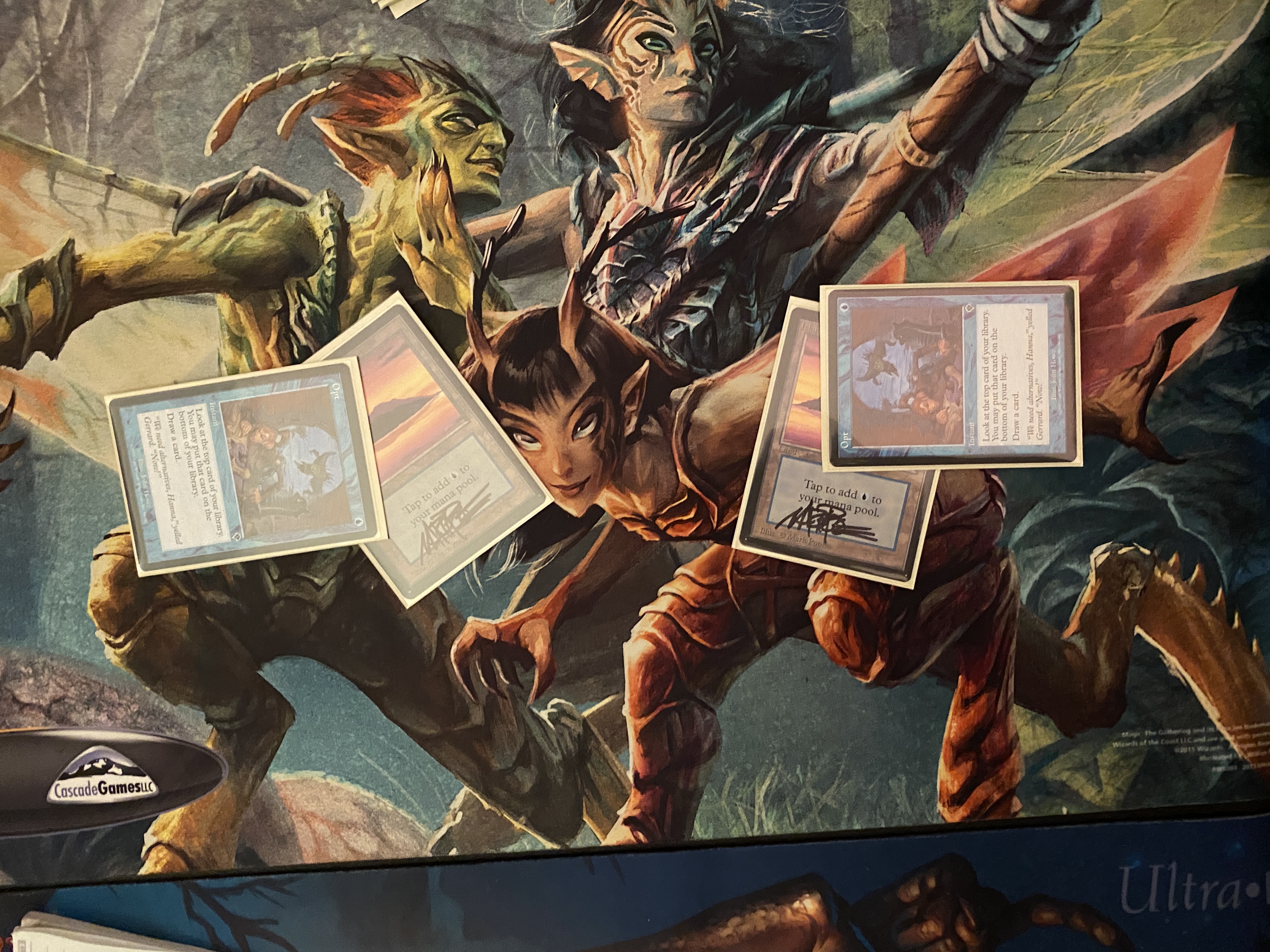 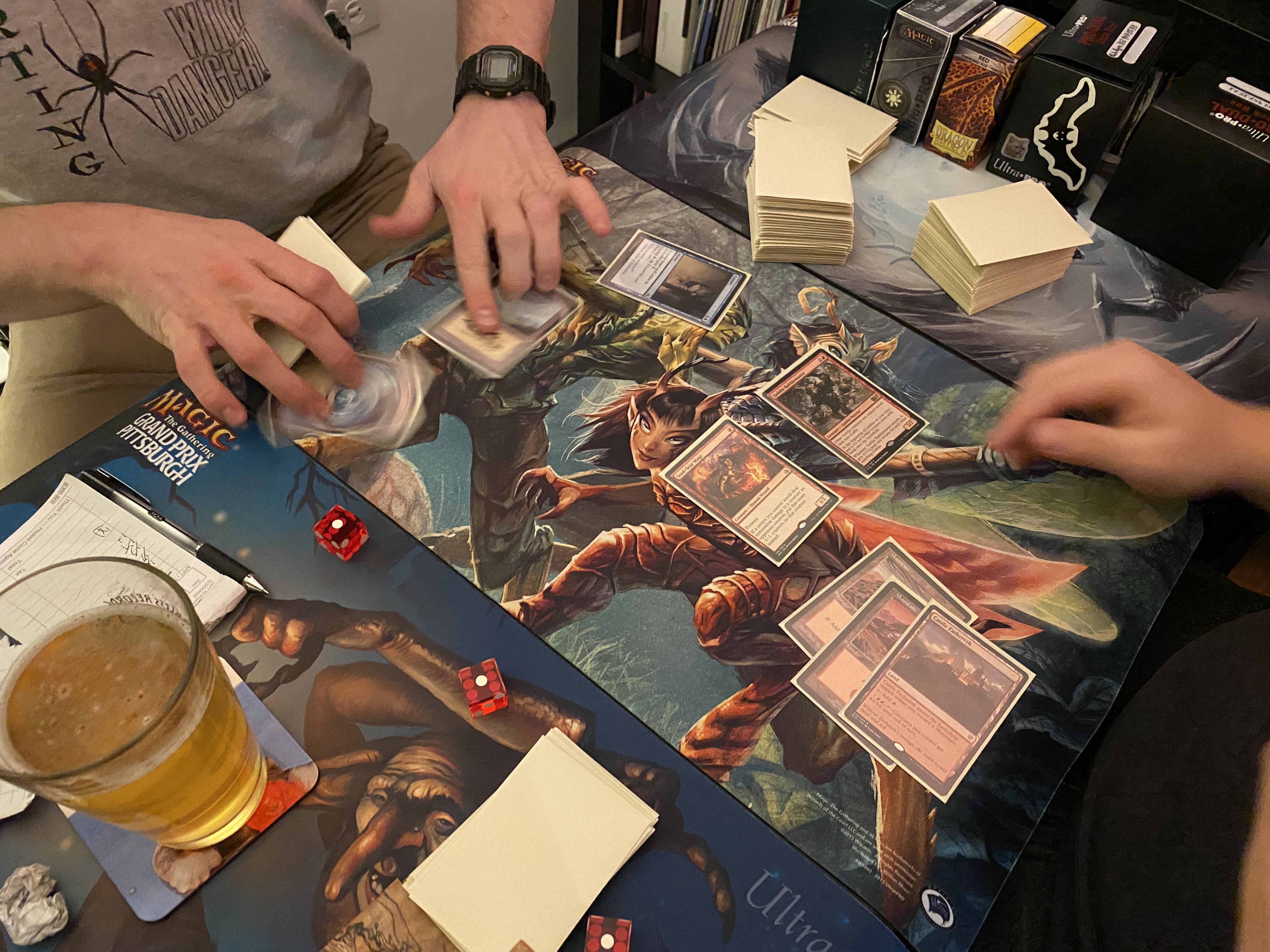 Greg kicks off game one of match two with a fetch into a Jackal Pup.

Jackal Pup is a huge liability against any type of aggressive strategy. Heck it’s a huge liability anywhere. Have you ever attacked into a Decree of Justice for a million with one? Not fun. Nevertheless, Greg swings into it and takes two. One from the Pup, another one from the sacrificed Mogg Fanatic. Damage still uses the stack here in Chicago.

“I want to concede already,” says Greg as he tanks on his second turn. He casts a Lavamancer. Lorien snipes it with another Fanatic.

“Let’s both take four,” sighs Greg as he resolves a Flame Rift. Lorien has a Cursed Scroll. There’s no way Greg’s winning. And there’s the Blistering Firecat from Lorien. And there’s a Lavamancer of Lorien’s own. Scoop. 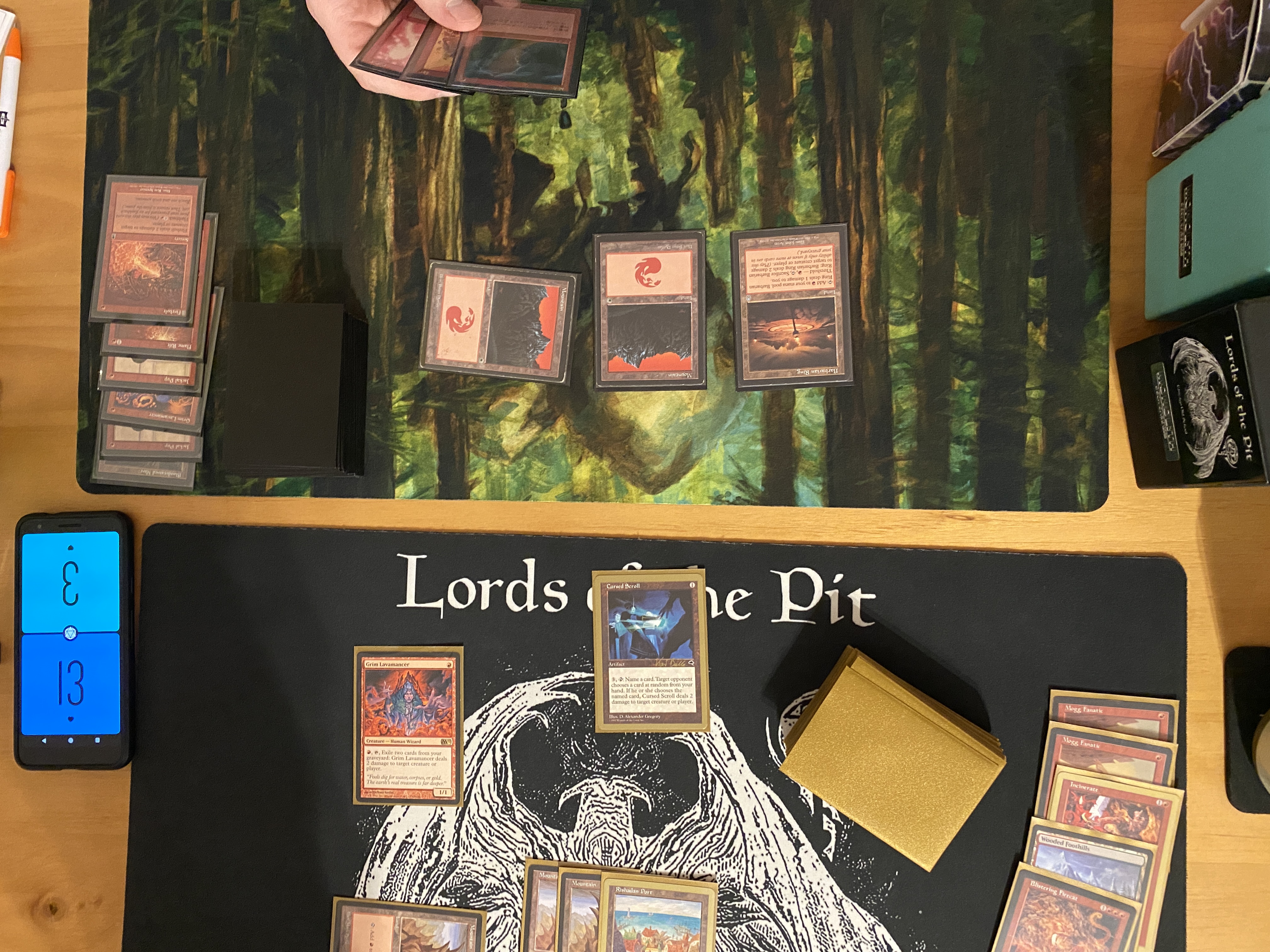 Game two of match two is not going Greg’s way. He’s some burn in hand and a… Phyrexian Furnace on the battlefield. Lorien raised his eyebrow when that resolved.

“Had to take some bad cards out for cyclers,” Greg offers. Lorien nods in consolation.

“Jackal Pup is such a fucking liability,” Lorien says as he resolves one, echoing the words I typed a few minutes ago. It looks good here, though. Lorien’s got creatures on board beating down. Greg has one in hand. Greg rips a heater.

Greg is at ten. Lorien, seven.

“Are we gonna tie or am I gonna win? Got three?”

Lorien consults the hand. Alas. Rifted. This is Lorien’s first game loss of the night. Quite the feat.

Game three, match two. We’re on turn three and there is a Mogg Fanatic and a fetch in each graveyard. Greg fires off an end step Incinerate and then follows it up with a winter Factory (big mood in a mono red deck) and a Flame Rift. Lorien fires back with an Incinerate and a bolt. This time score is ten Lorien, seven Greg.

“Are you ready for this?” Lorien asks with a laugh. He drops Blood Oath. 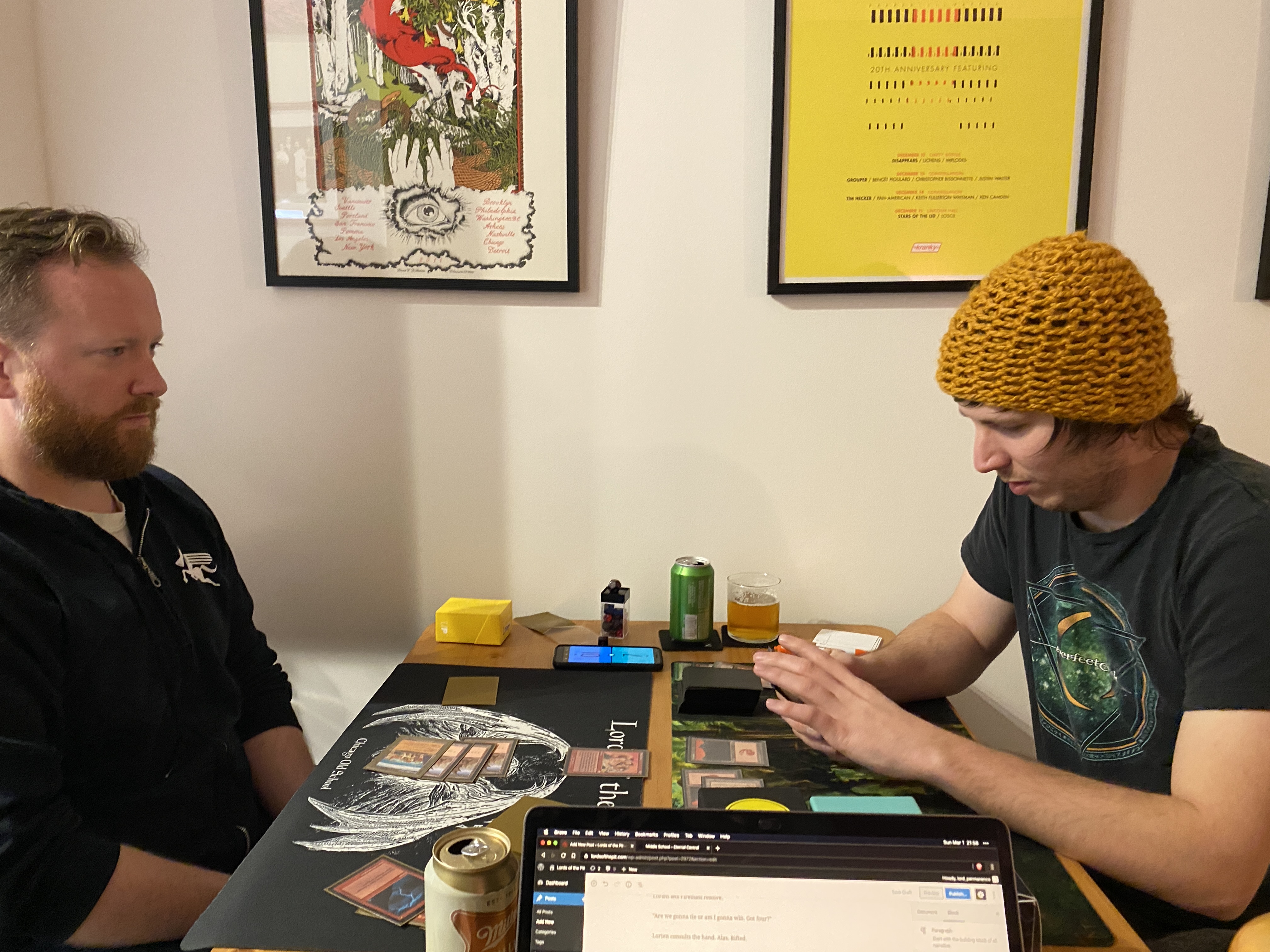 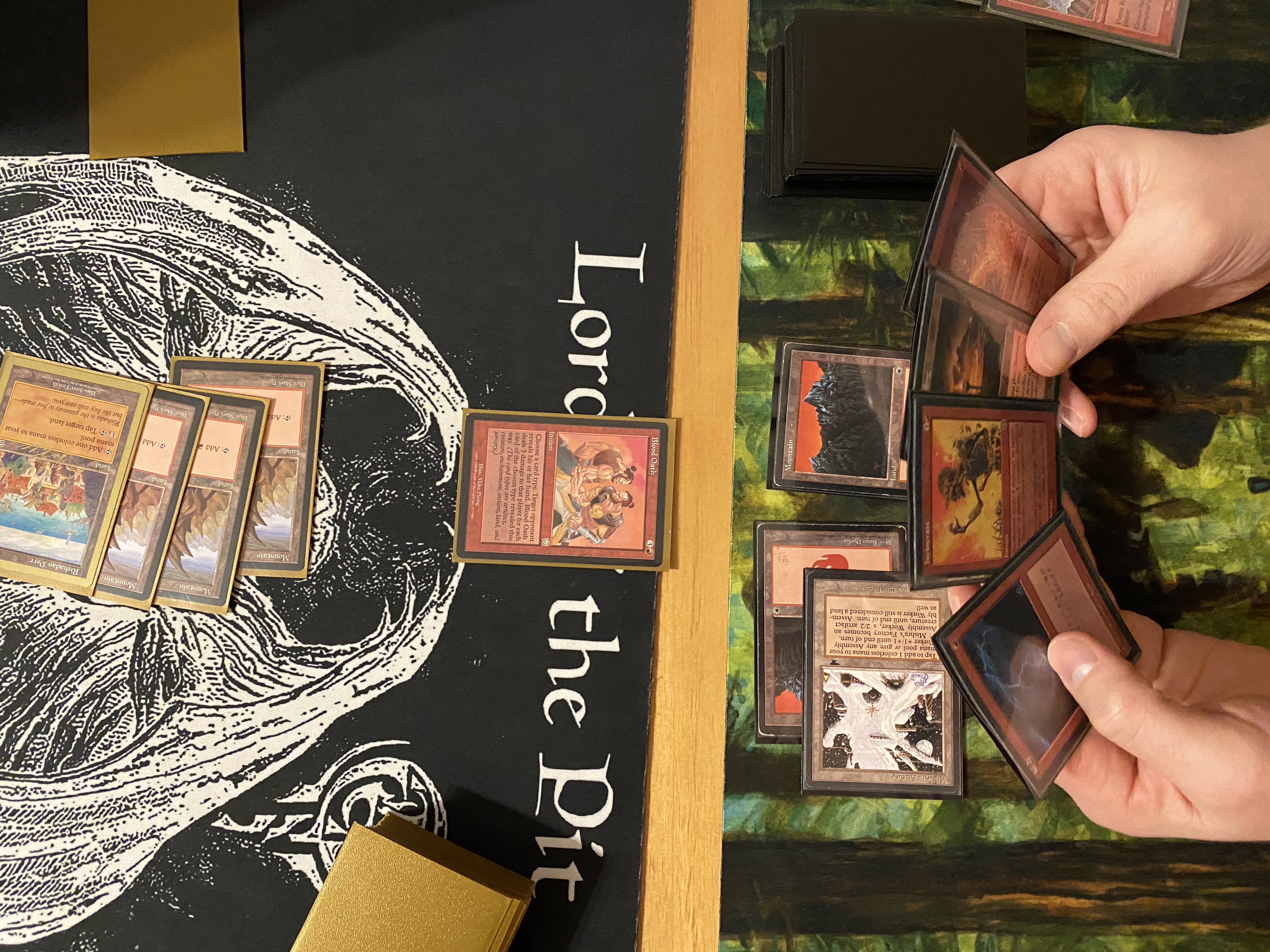 Greg bolts face. Lorien names Instant. Tags the Incinerate. Fireblasts. Victory We’re on to match three. This could be it. 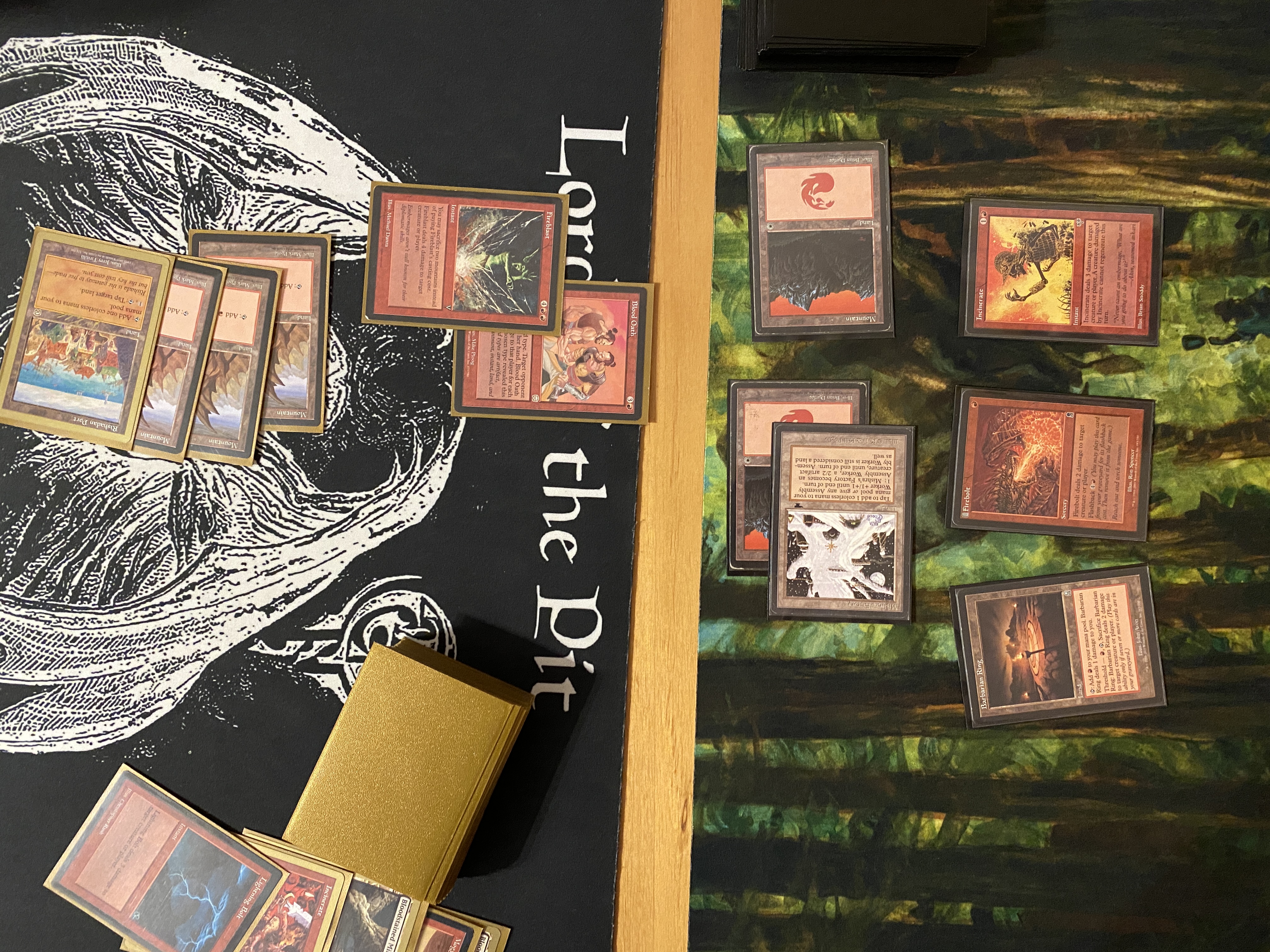 They head up to the roof for a cigarette. Magic of this caliber and intensity can fry the nerves.

Greg laughs at his opening hand. Keeps a one lander. 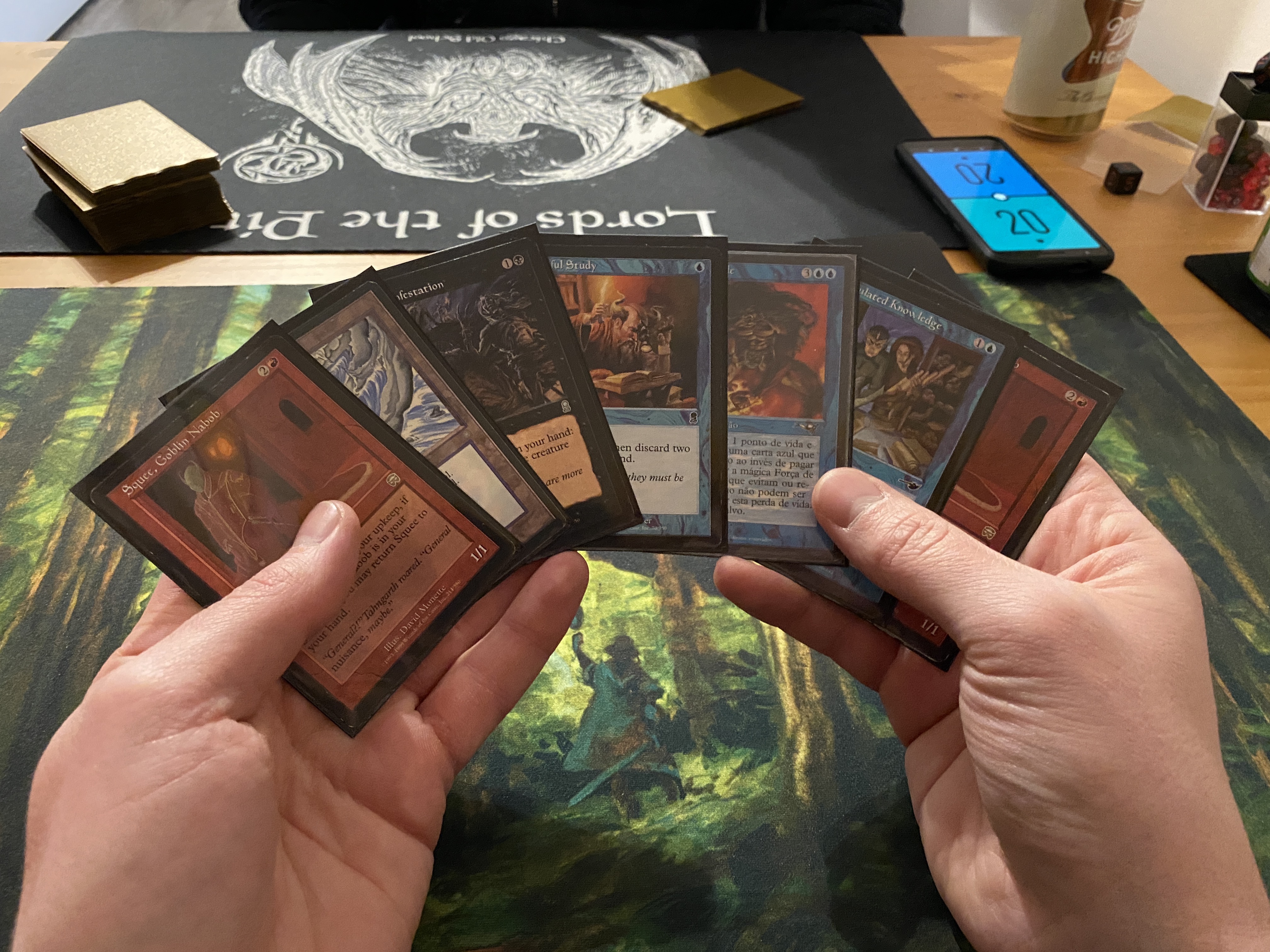 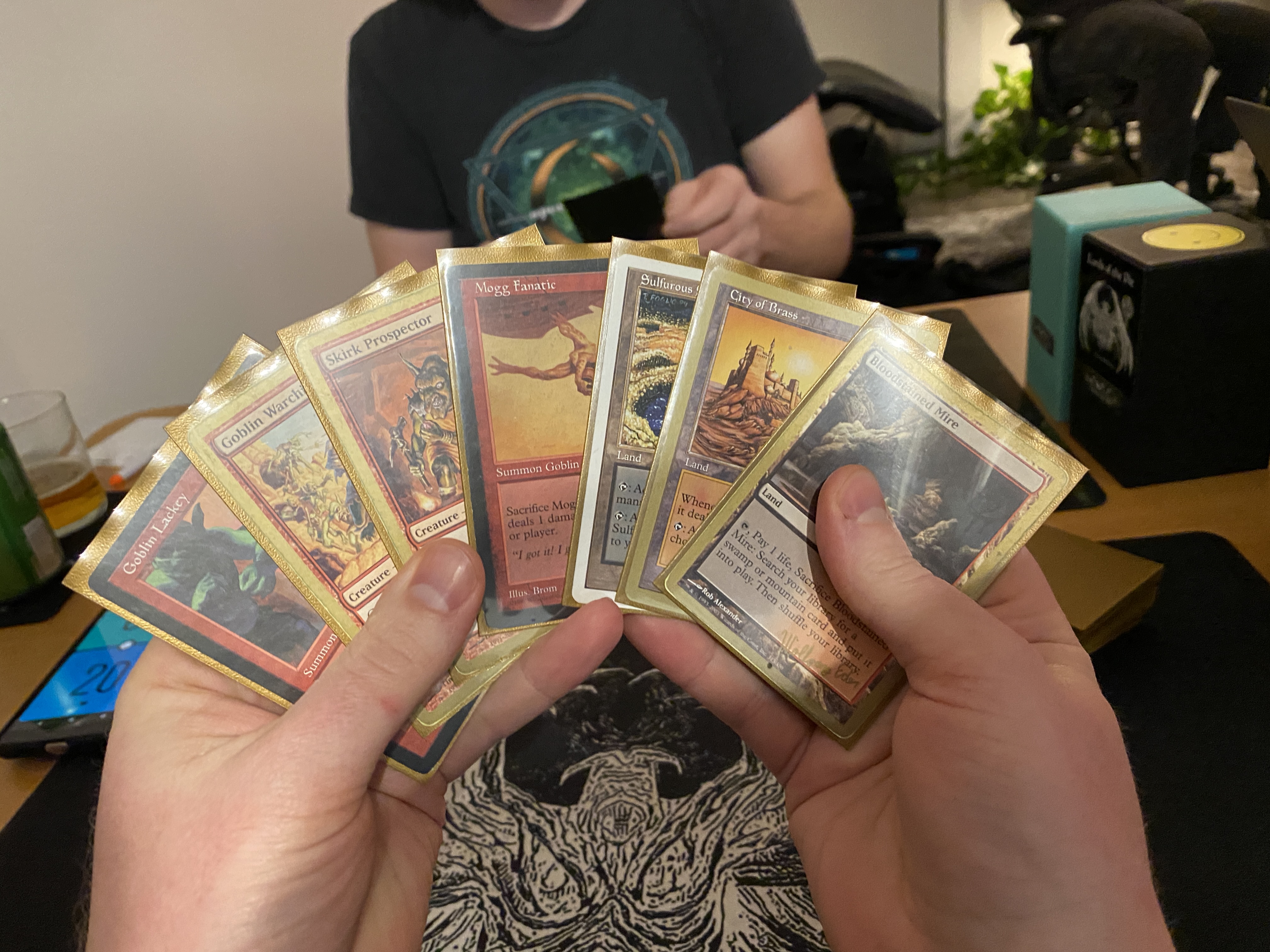 Casts Careful Study and bins two Squees. Lorien is intrigued. Lorien drops a Lackey and its back to Greg. He resolves his win condition: Zombie Infestation.

Lorien’s hard to read. Stone cold poker face. But he’s laughing now. He knows this is not a winning fight.

“Ok, I have a plan,” Lorien says after composing himself from both the giggles and the sighs of anguish. Blind hits a Counterspell off a Therapy. Now Greg’s just laughing like a madman and discarding everything to make zombies. Everyone’s laughing.

Greg’s got the Forbid-Squee lock. 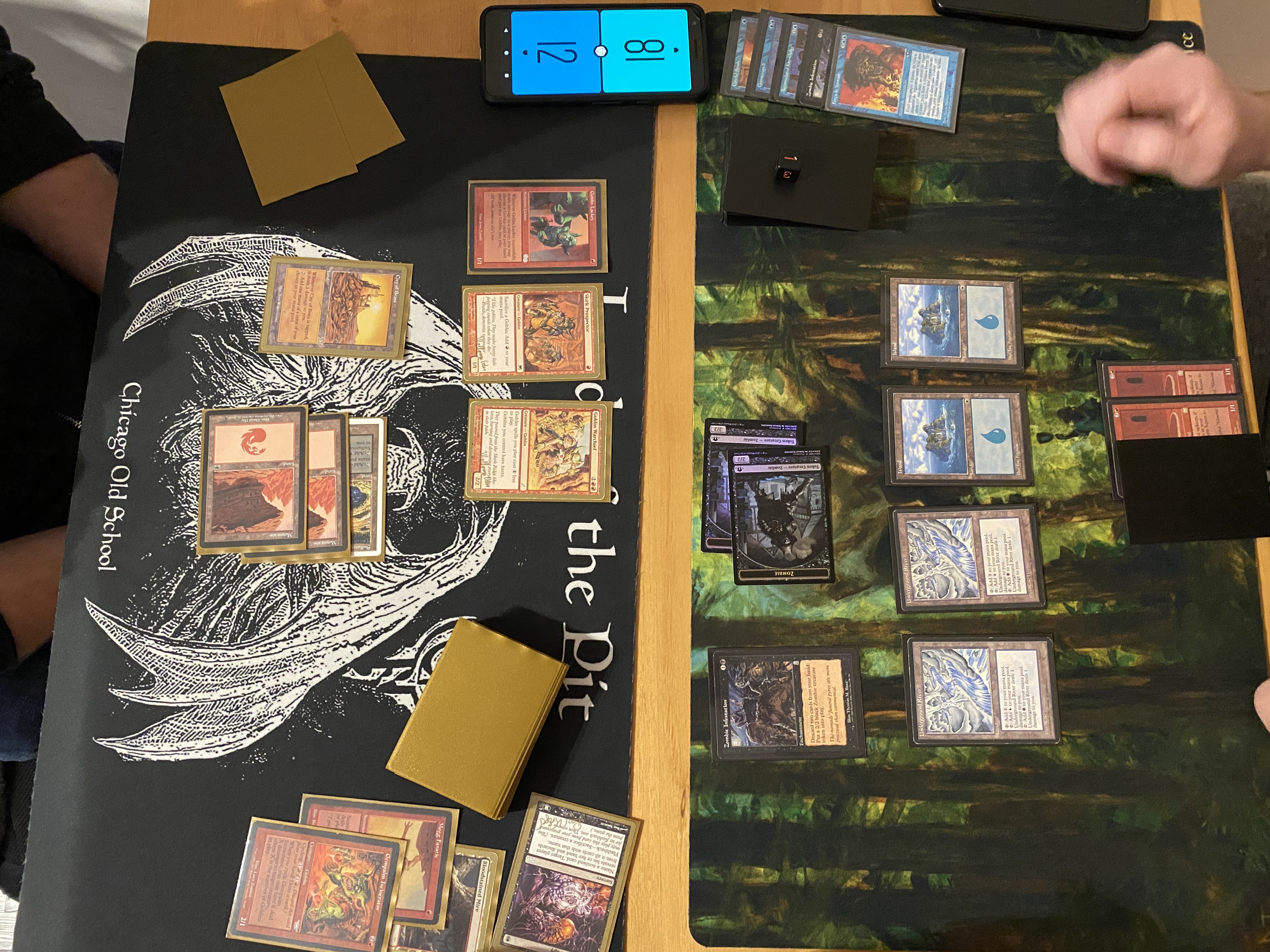 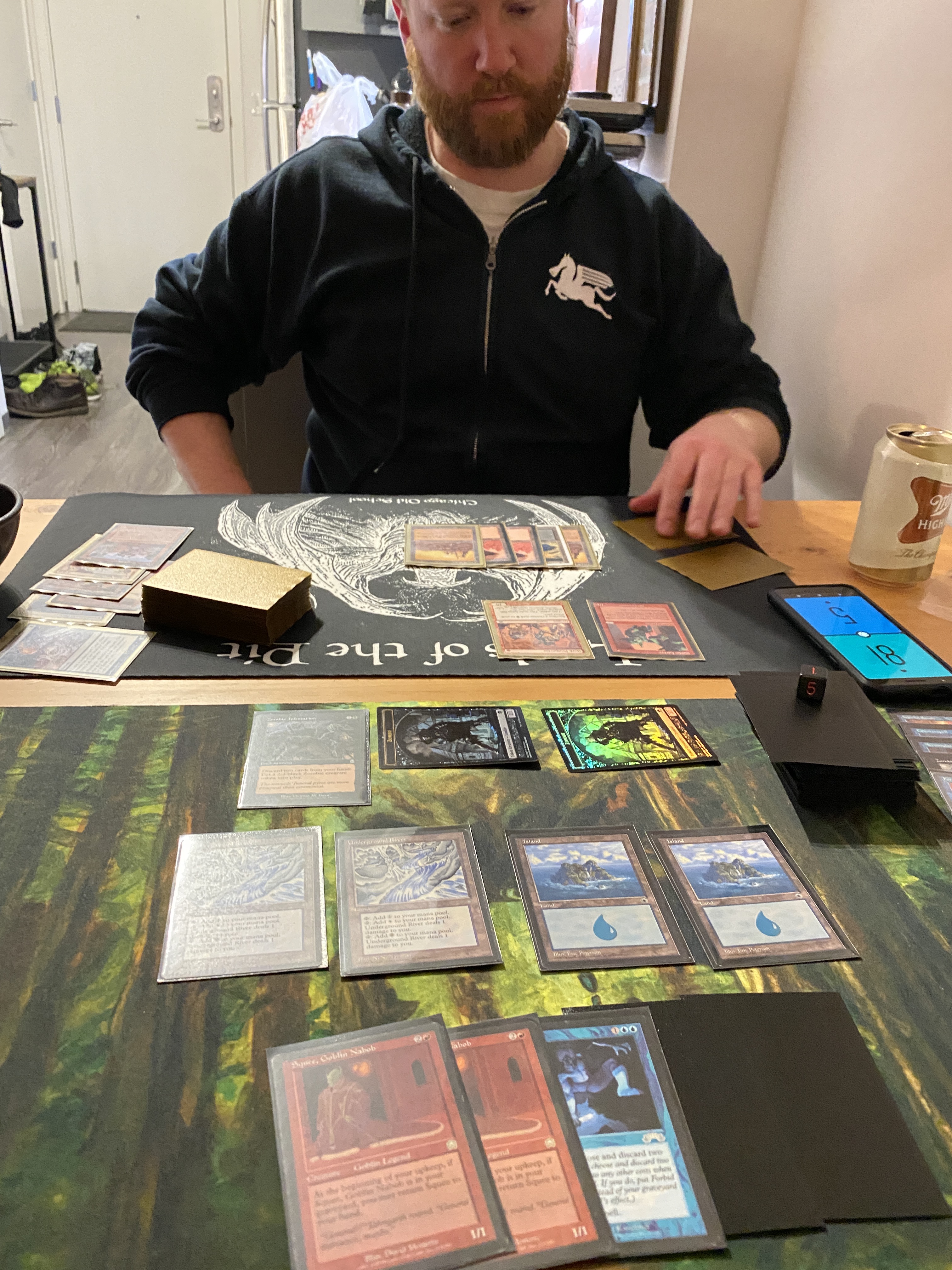 Game two, match three. A Goblin Matron eats a Daze. A Ringleader eats a Mana Leak. Duress from Lorien… and he tanks again. The Forbid is so oppressive, but the Blue Blast can foil Lorien’s Burning Wishes. Greg Doesn’t know about the Burning Wishes yet. He takes the Blue Blast. 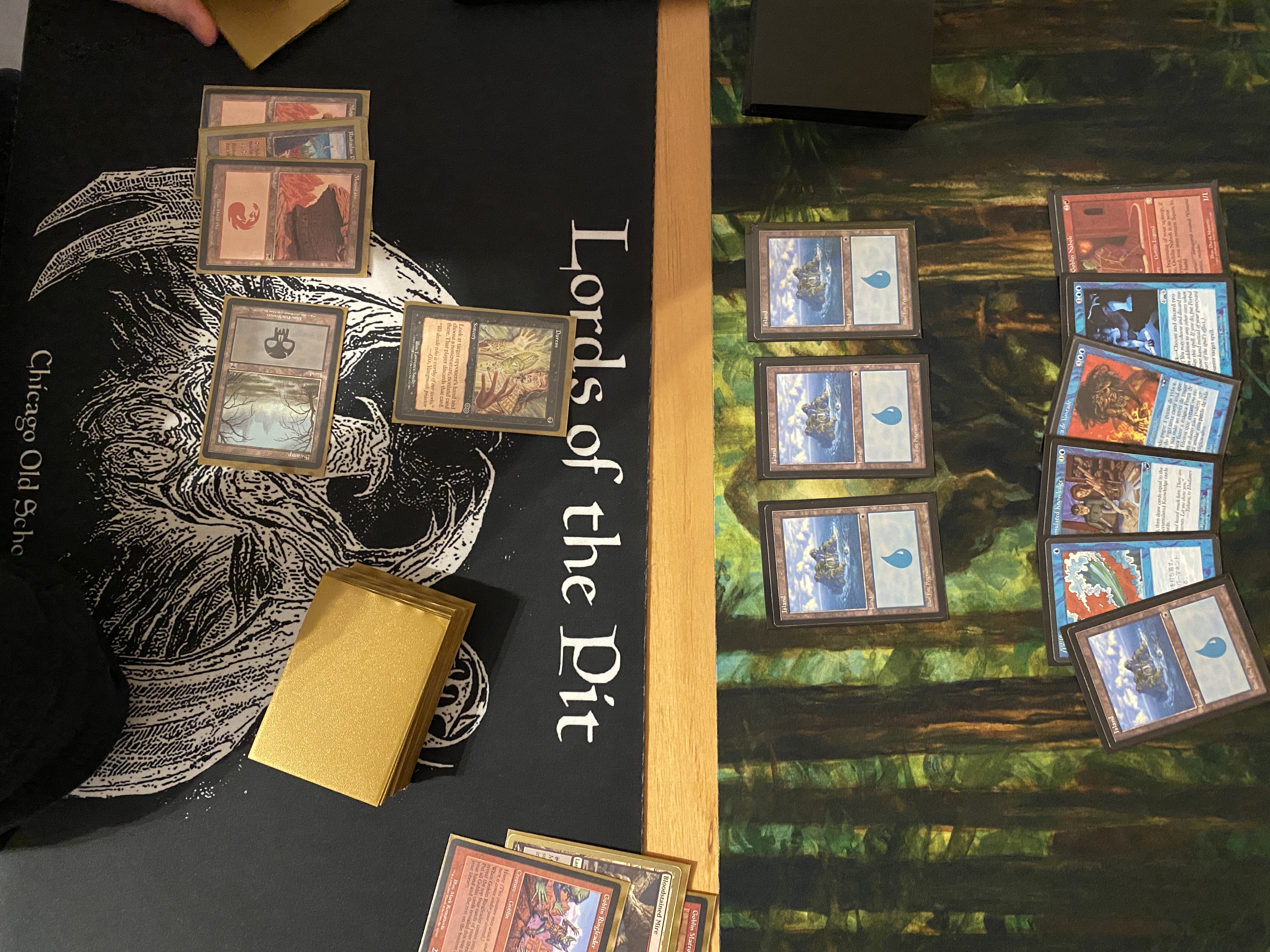 Lorien arranges to have Squee purged of his coffin.

“This card is sweet,” Greg smiles when he refreshes his memory on what Coffin Purge does. Squee is a recursive engine, and Purge is a surgical answer. A Ringleader slams into another Daze. Greg resolves a Zombie Infestation.

“Aha! All my cards are zombies, only some of yours are goblins.” Greg is the best at playing the bad guy; the video game boss. Before the game is officially over, Lorien and Greg begin analyzing why Greg won. Sure enough, it’s over in a few turns.

Lorien has two matches, Greg’s forced a fourth. Will they go to five?

Both players text me their next deck choice. Greg was impulsive. He’s running the same zombie deck again. Lorien contemplates for a long time before deciding on swinging back to Bant Survival.

Early on, a fight erupts over the Infestation. 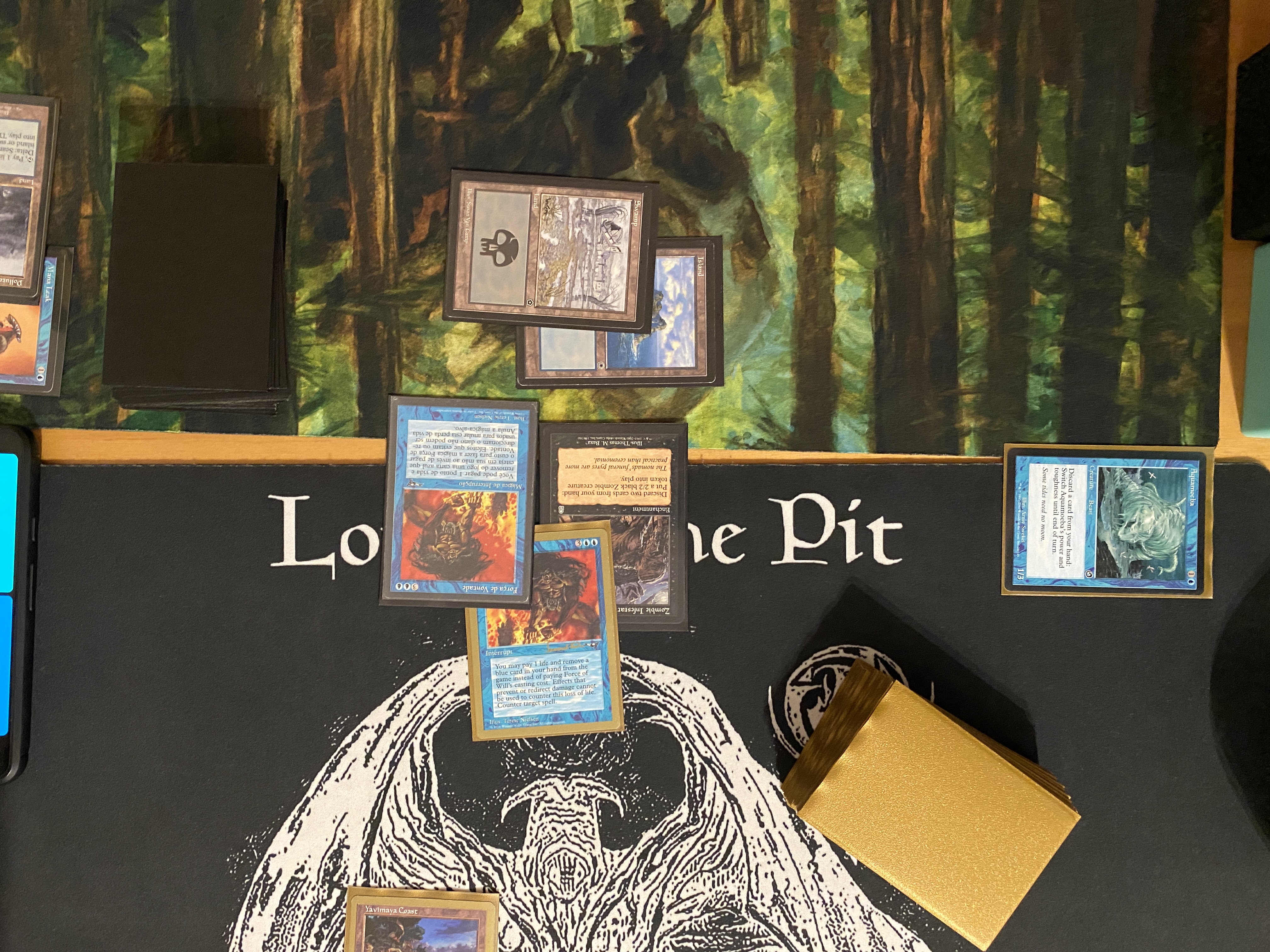 A few turn later Lorien makes an Akroma and Greg dumps his hand. Lorien wins in the skies. 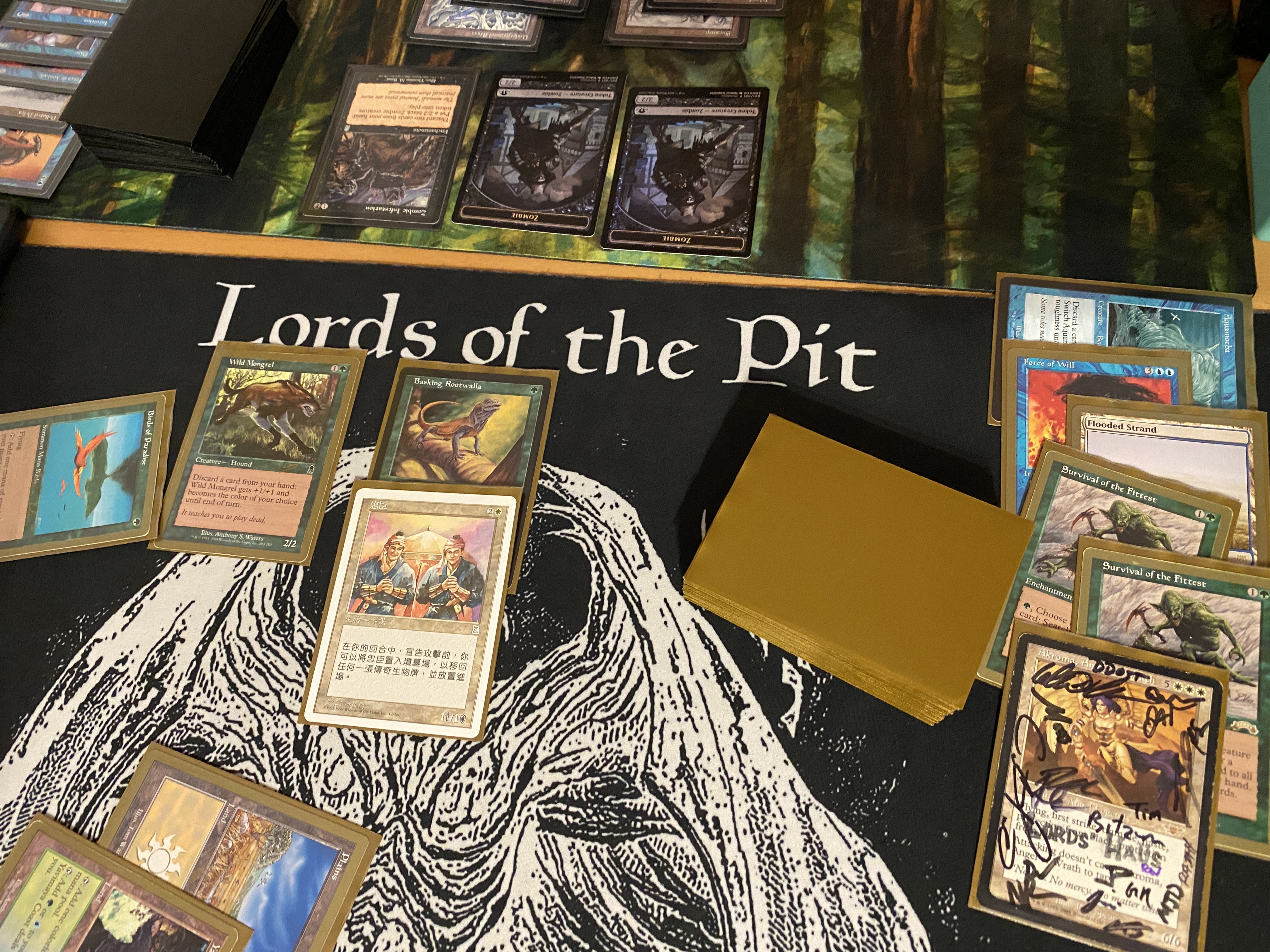 Onto game two of match four. Lorien’s down to five cards. Greg’s sitting pretty with seven. Greg Carefully Studies twice, binning a Squee, but Lorien has a Krosan Reclamation. Greg asks me to take a photo of his hand. Then Lorien shares his. 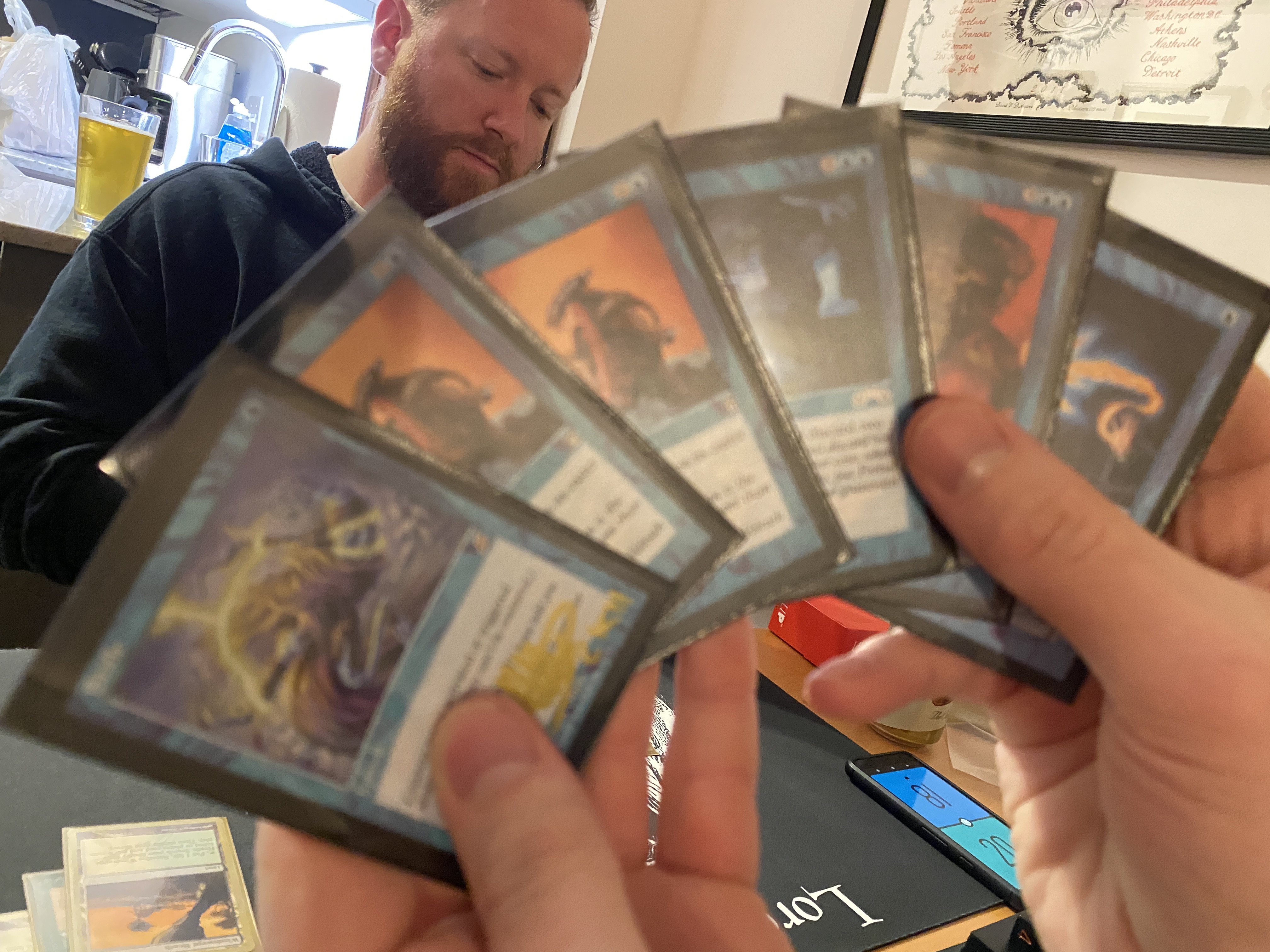 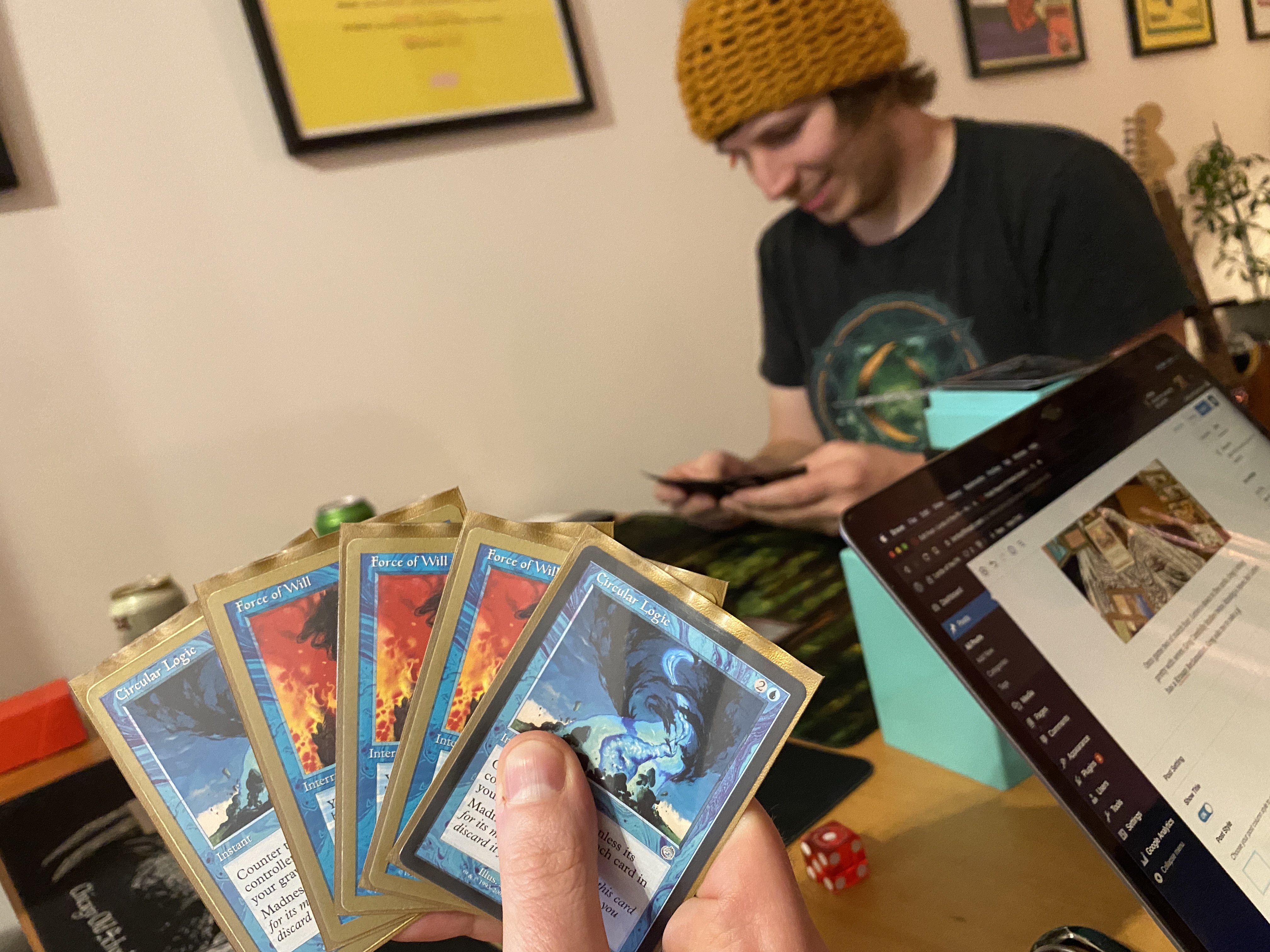 The zombie infestation begins, but then Lorien manages to hardcast an Arrogant Wurm. The Wurm starts attacking. Greg has two cards in hand. Force and Upheaval. Upheaval is his ticket to victory. By returning all lands he can then pitch them all to the Infestation. He slams Upheaval but Lorien has Force. Lorien naturalizes the Infestation. Now Greg’s down to three life and Lorien’s resolving another Wurm. The wurms crash in and Greg does down.

Congratulations to Lord Lorien, Lord of the League!!!

← Every So Often: The Lords Haüs Champion's Report
Pitcast – For the Lords →