Steel gray overcast skies greeted the nine hale mages who Gathered at DMen Tap to partake in the Lords’ second iteration of Christmas Chaos. Amidst the holiday redecoration of DMen’s backroom into a Krampus-inspired dungeon, the Lords & Co. deposited numerous toys in offering of Pt. II of our annual Toy Drive. Our format of choice, in keeping with last December’s Gathering, was Eternal Chaos – Chicago’s favorite pack-cracking, dopamine-inducing degeneracy – albeit a modified version for 2022. 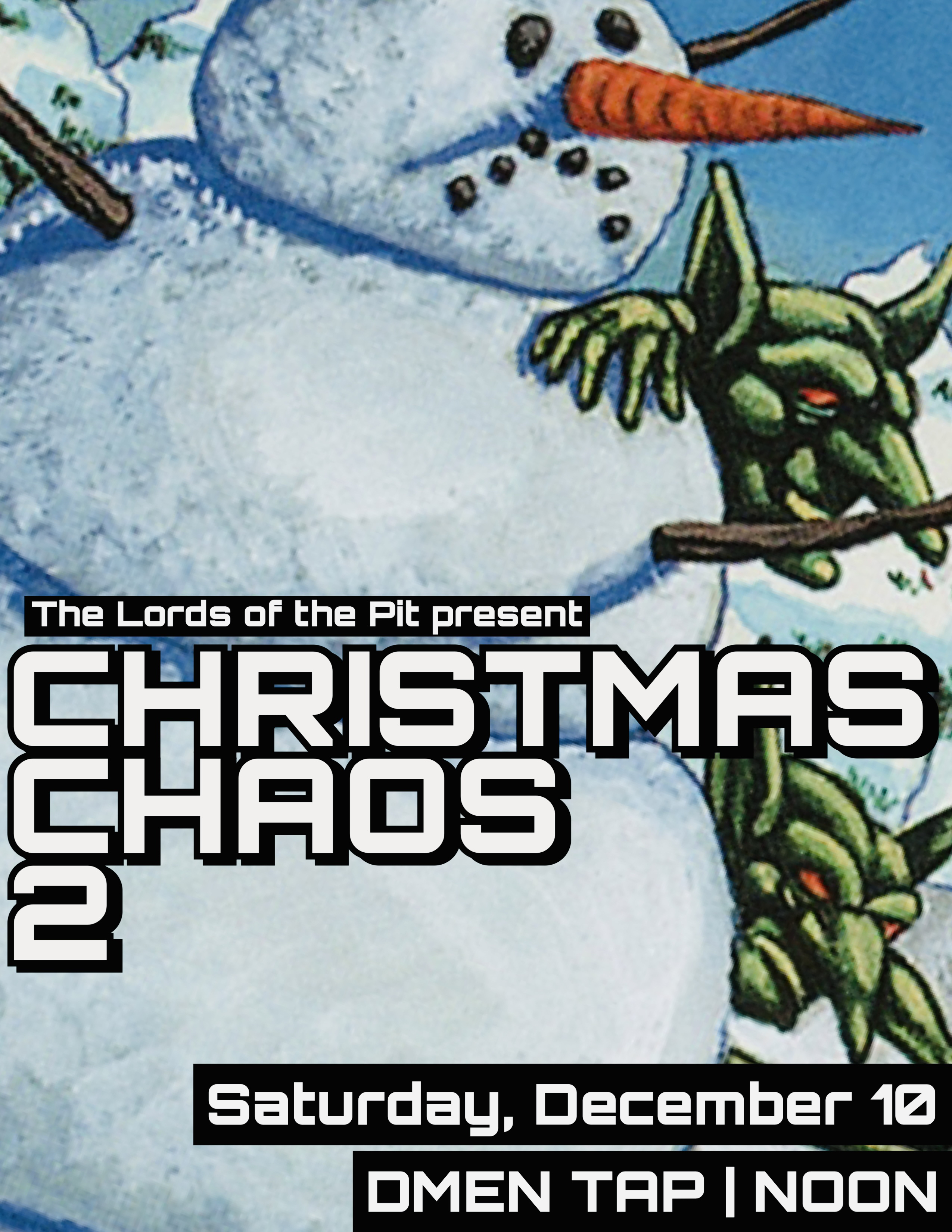 We added two new cards, legal as four-ofs, for Christmas Chaos 2. First was Unfinity’s Opening Ceremony, a Red six-mana Sorcery that color fixes and allows its caster to deploy any number of spells from a freshly-cracked pack. Second was Unstable’s Summon the Pack, a Black eight-mana bomb that puts all creatures from a cracked pack immediately into play as Zombies. Our cunning wizards deployed these new cards to devastating effect; for example, Chet used big mana to ramp into Opening Ceremony in his “Fast Pass” deck. Meanwhile, Lords Velasco and Elleman fully embraced the Spirit of Christmas Past, each bringing packs of 2003’s Legions (an all-creature set) to push the impact of Summon the Pack to its fully-realized potential. Witness: 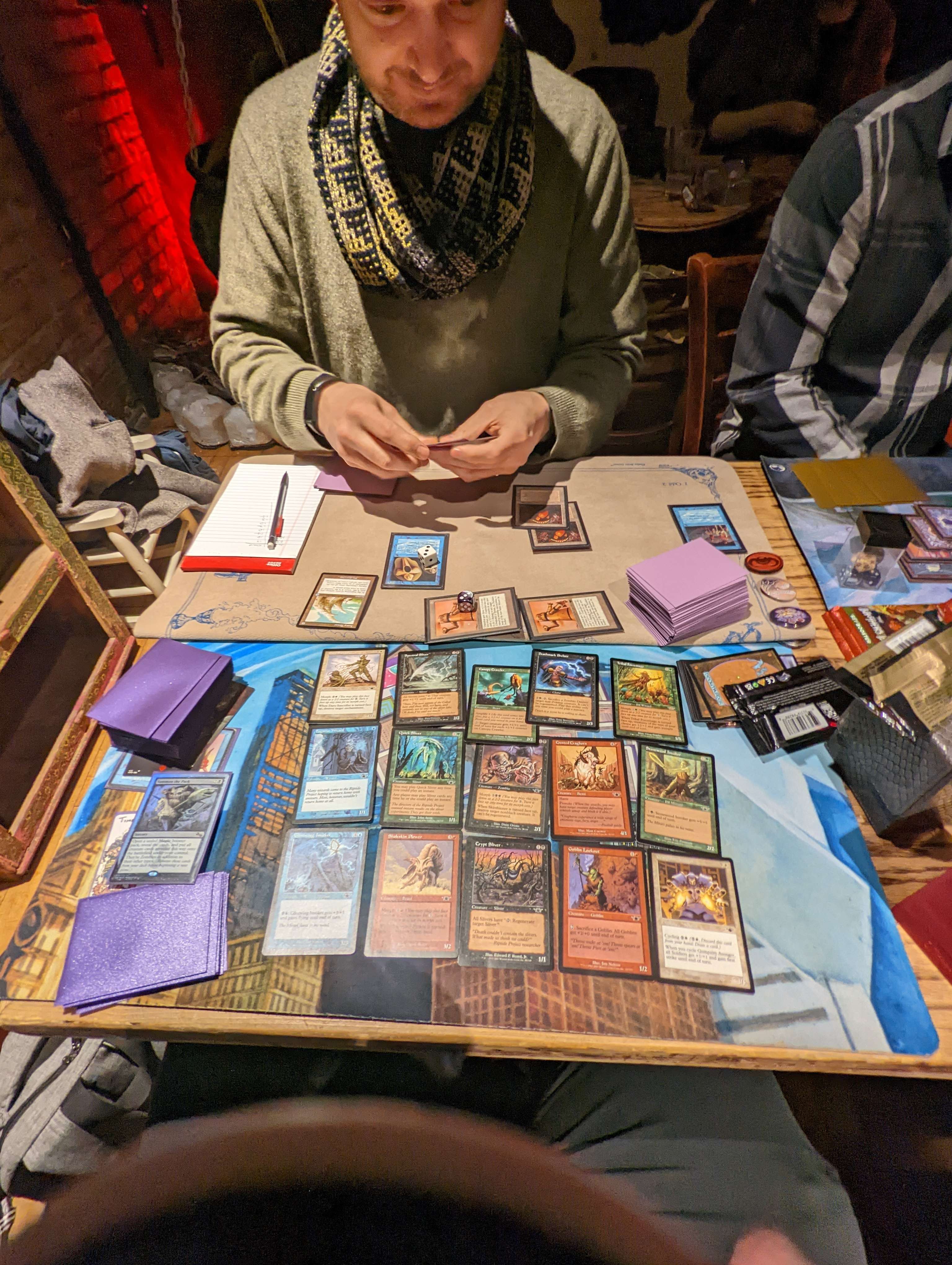 The new hotness of Opening Ceremony completely outclassed the old & busted Booster Tutor, both in form and function – why cast one spell from a boostie when you can cast many? And Summon the Pack, while gimmicky, has life as a spicily flavourful win-con for a control or ramp lists. Perhaps OC could be too powerful, but isn’t that the whole point of this fringiest of fringe sub-format variants? 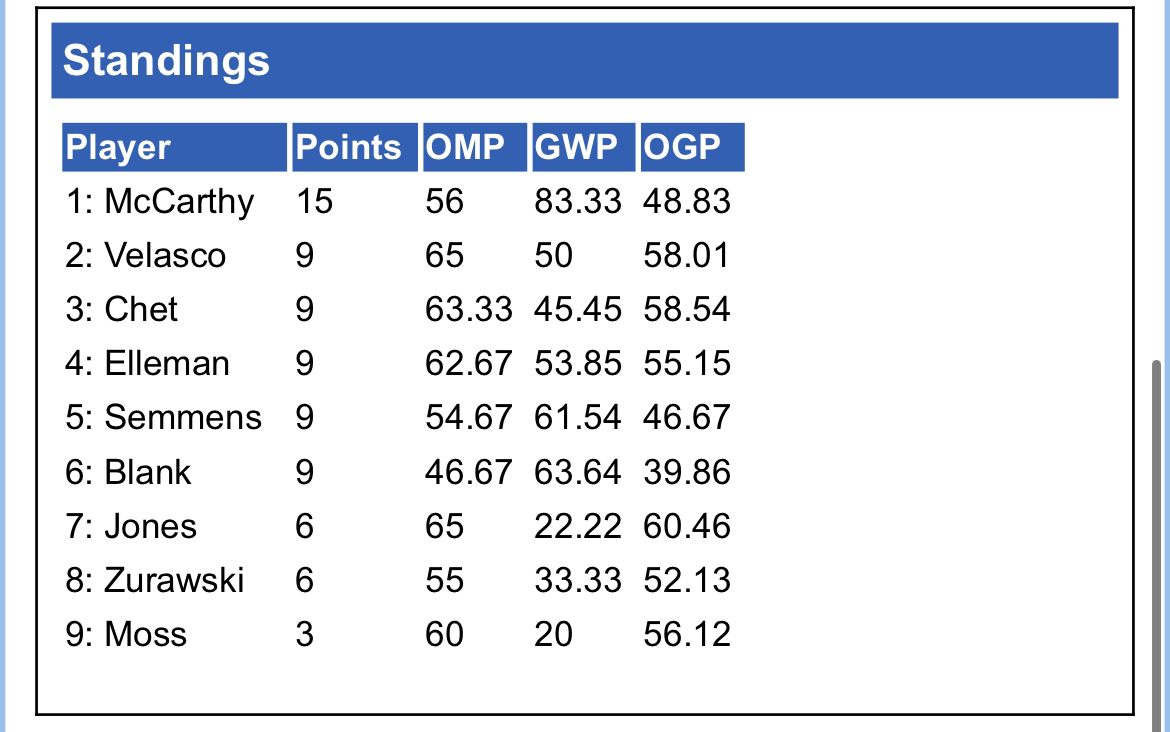 In gaming action, Jimmy McCarthy used Shops to take down the field at 5-0, even ripping a mighty Wurmcoil Engine in one match, and Lord David Velasco took the “top” prize – a masterfully altered Opening Ceremony depicting Lord of the Pit – for cracking the most boosties (16). Thanks, Shane and Zach, for coordinating the siq alter! 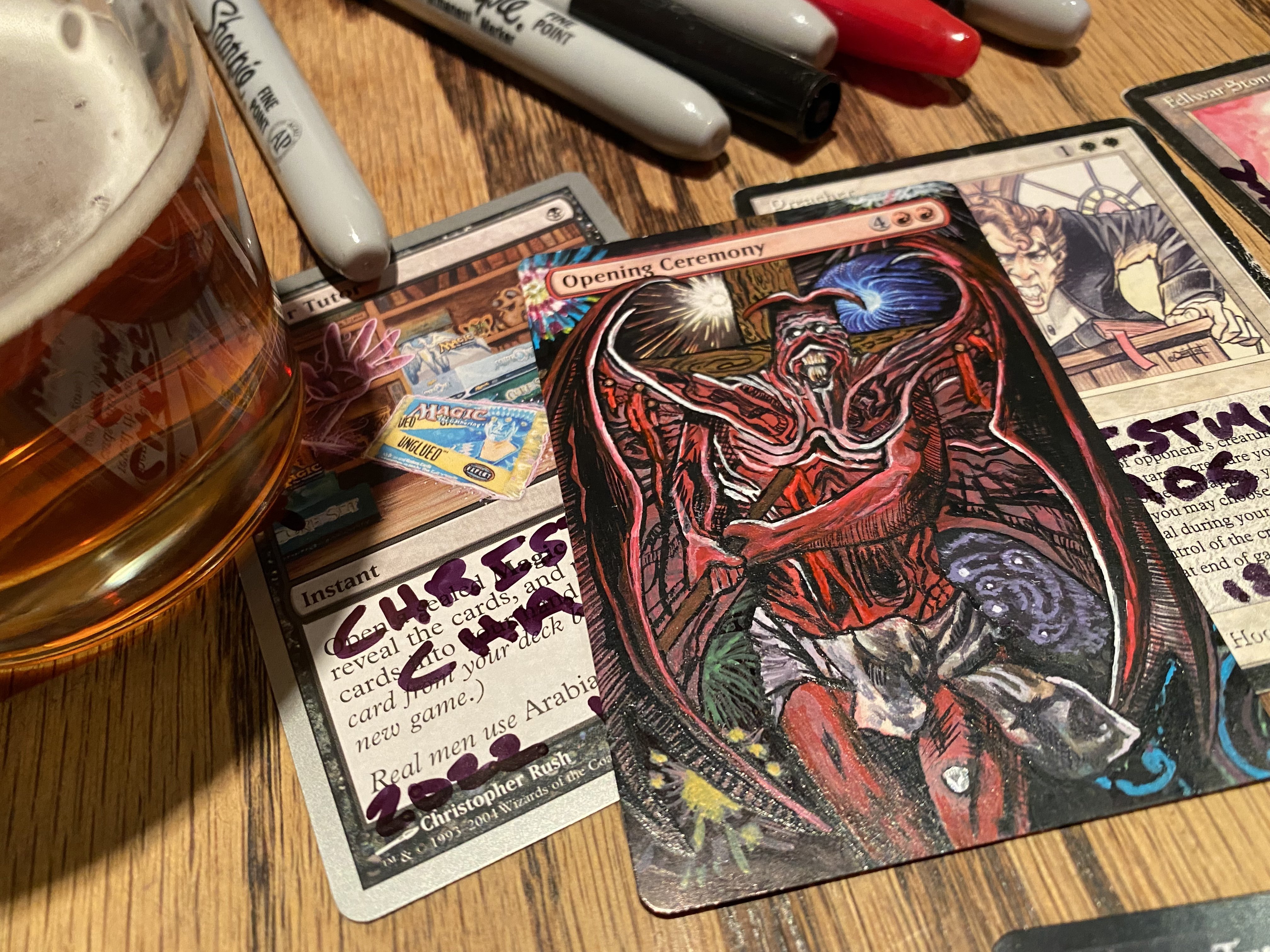 Other decks in the room included Power Monolith (Blank), Underworld Dreams Combo (Jones) and 5C Shops (Semmens & Moss). After the day’s battles, a handful of hungry mages made their way down the block to dine on Trespassada and Recall the day’s broken plays. Thus concludes 2022, another fine year of Old School Magic in Chicago. Happy Holidays from the Lords of the Pit! 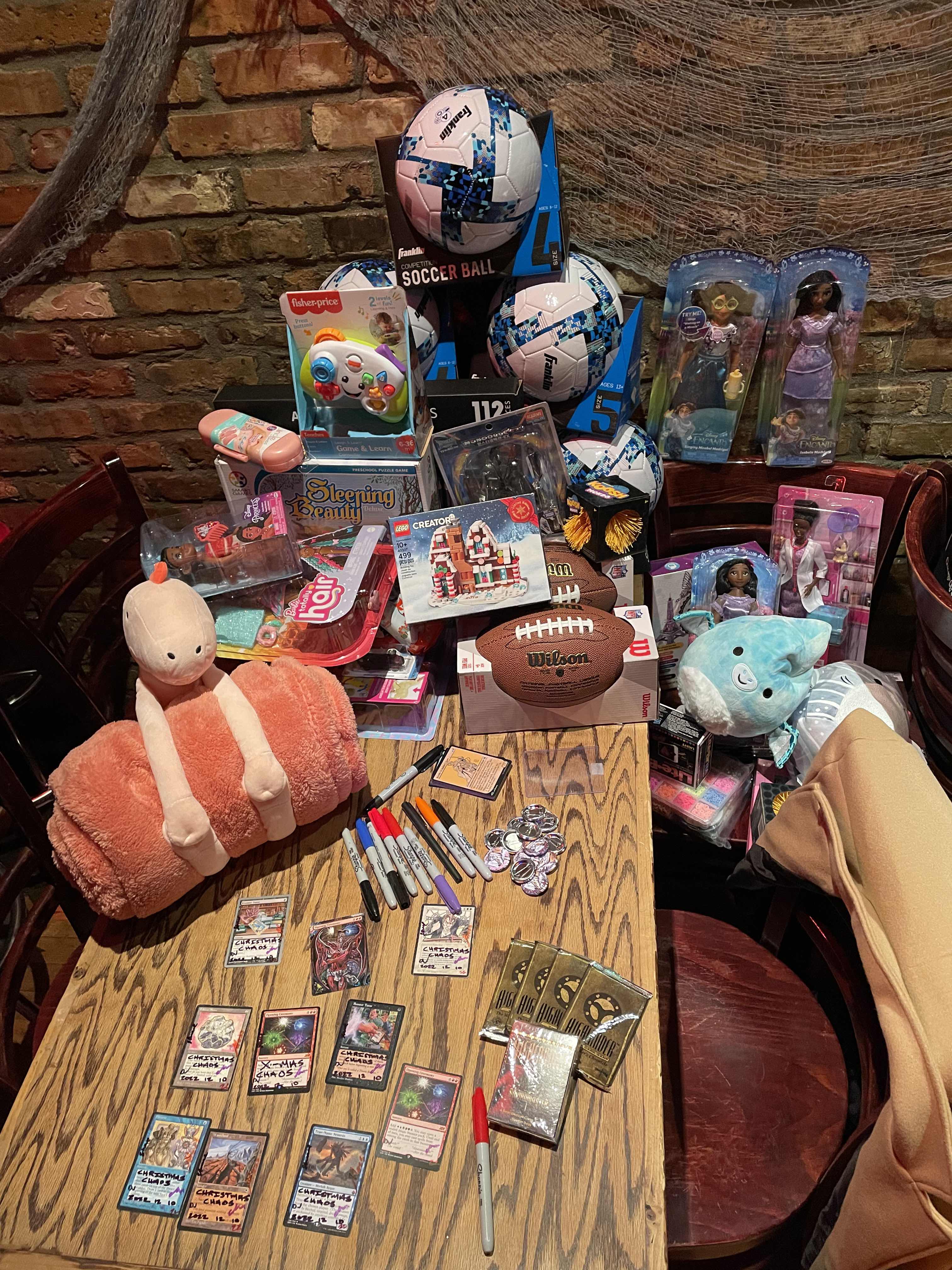 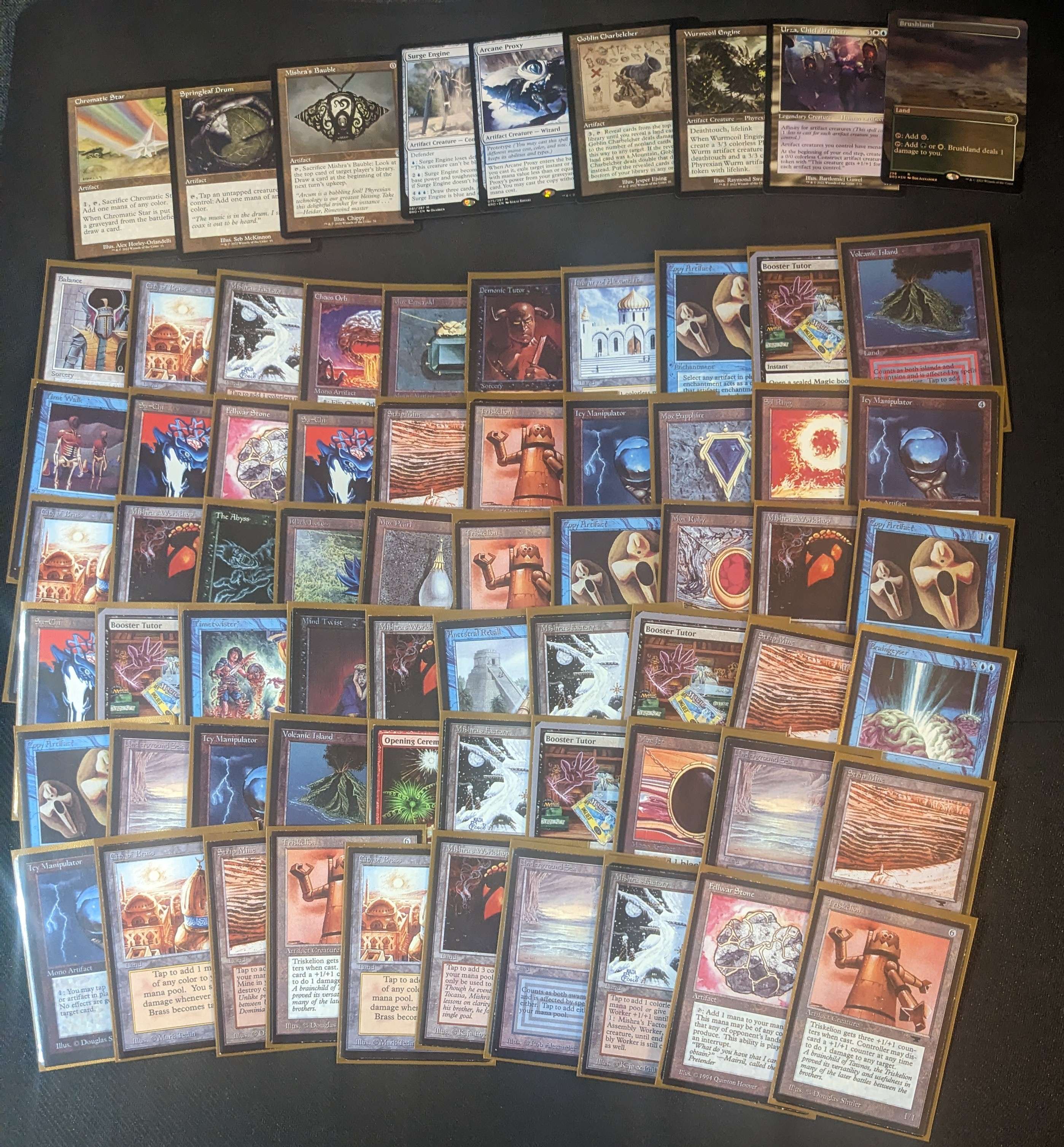 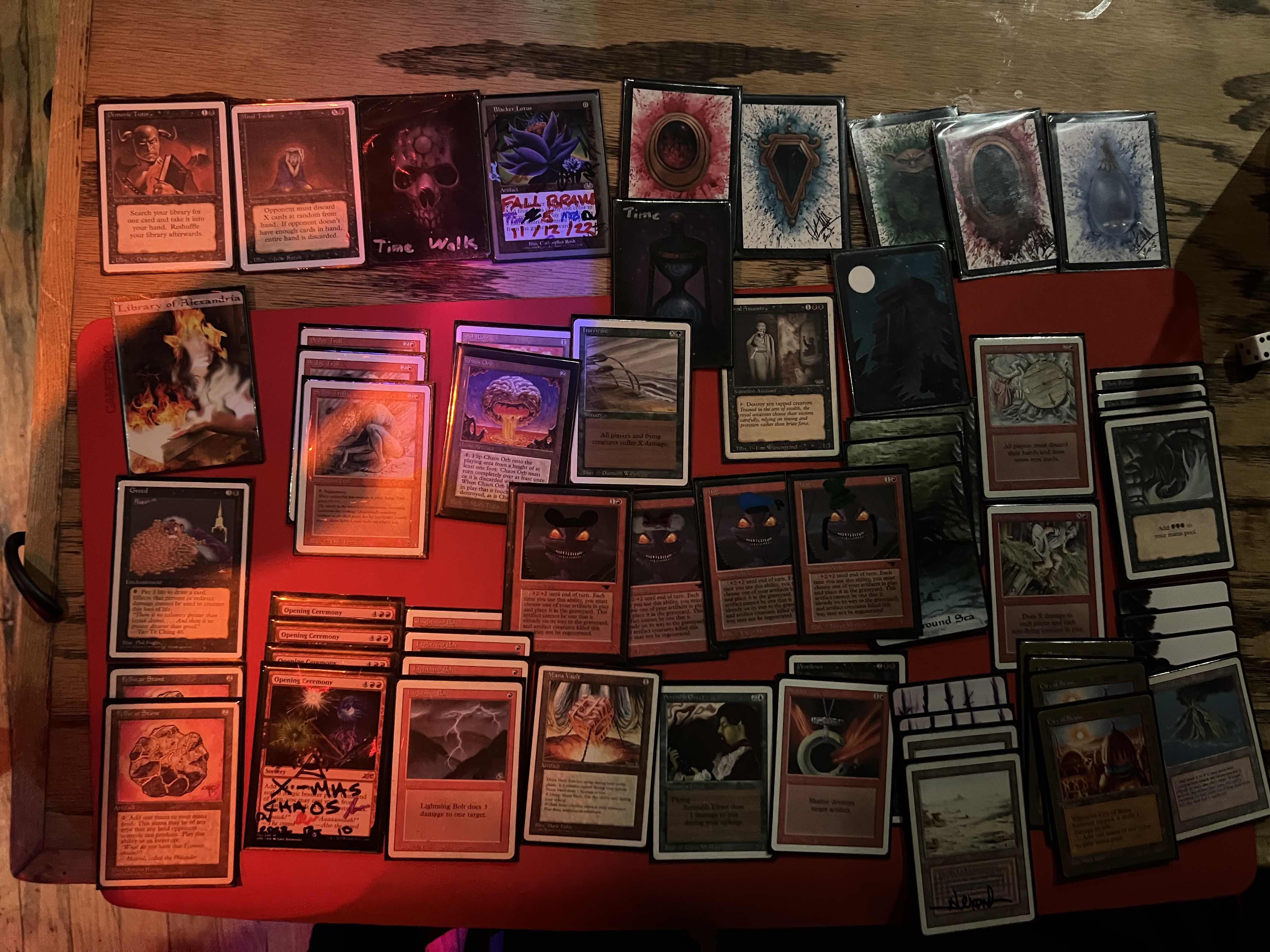 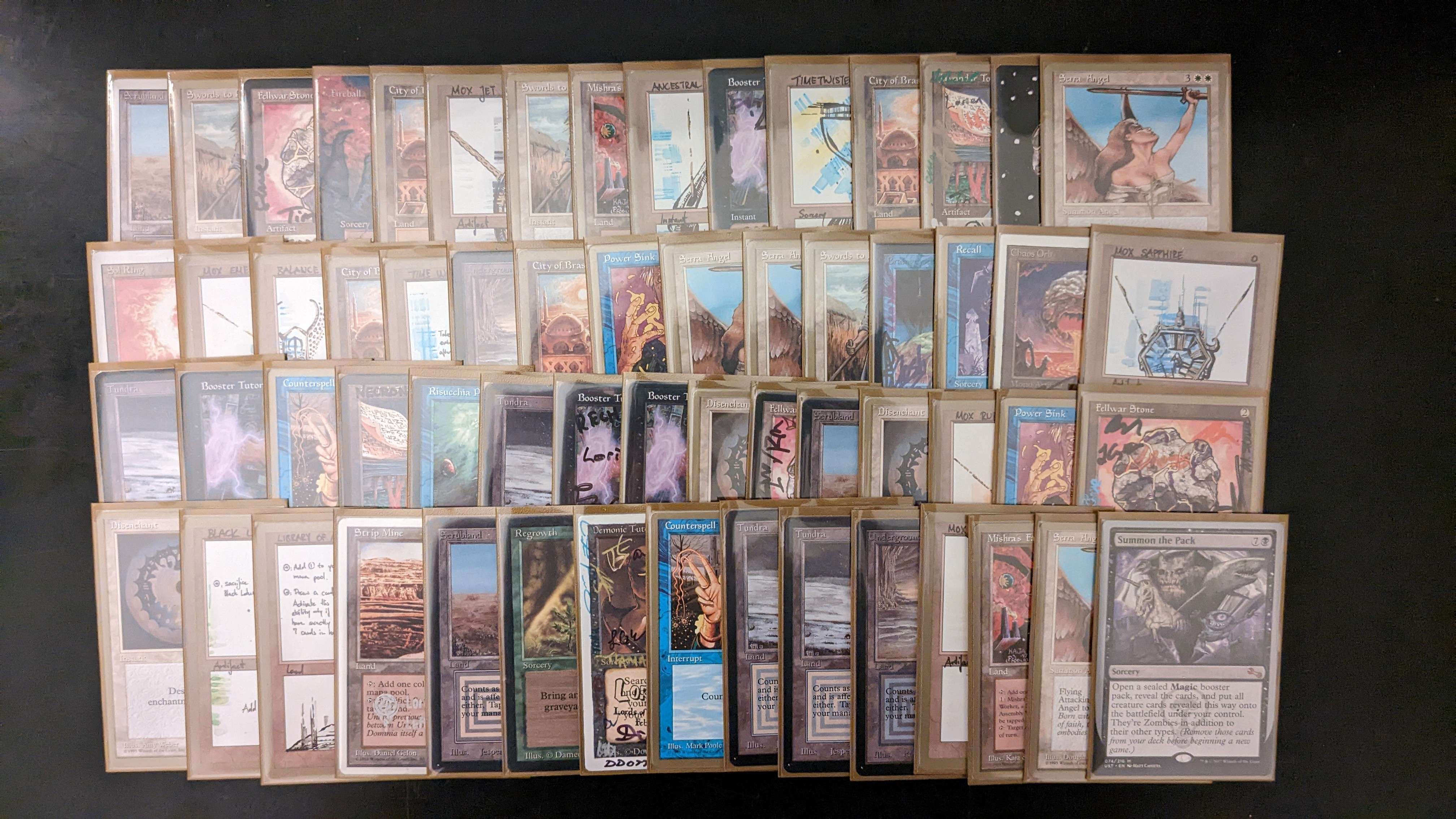 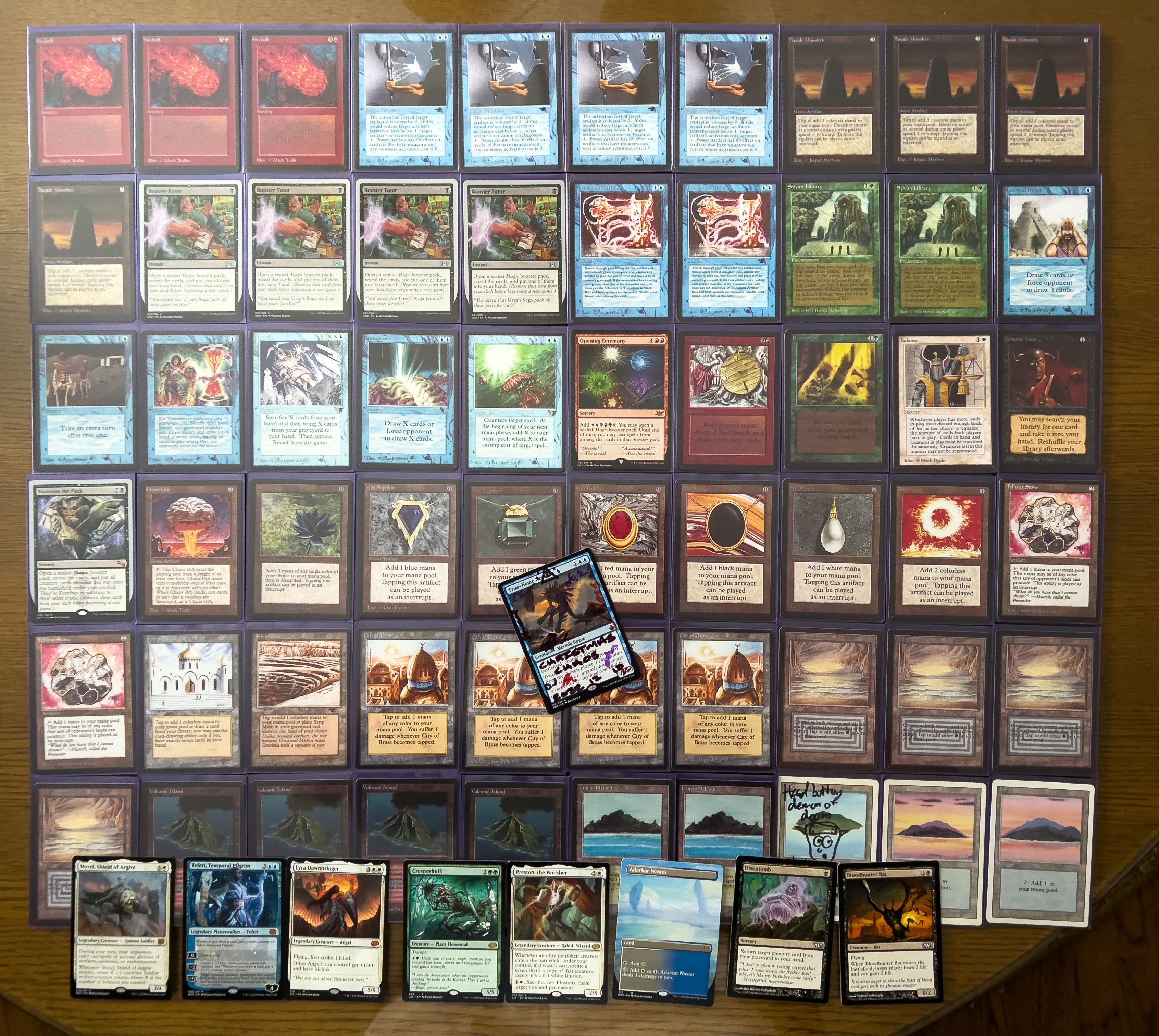 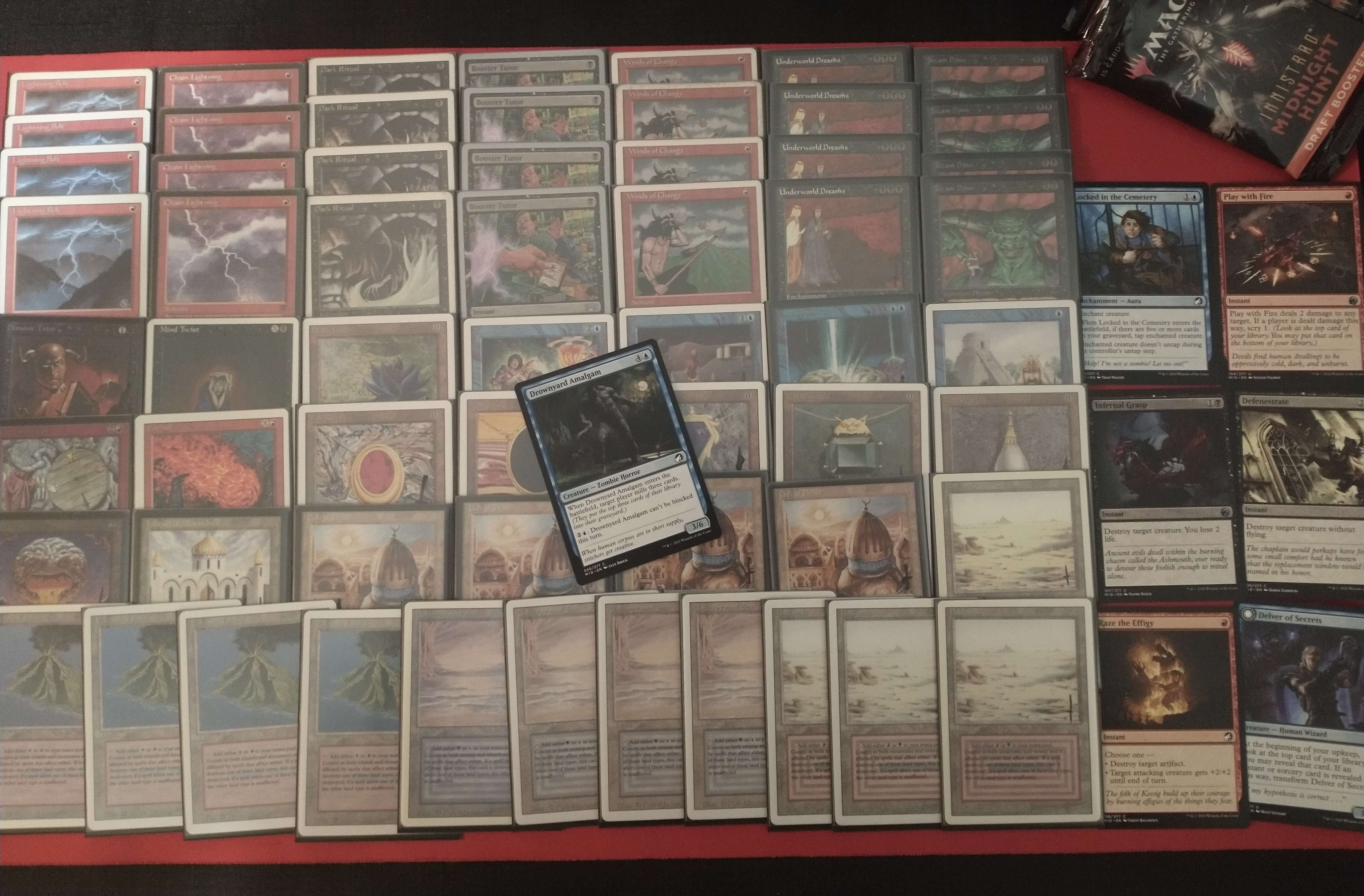 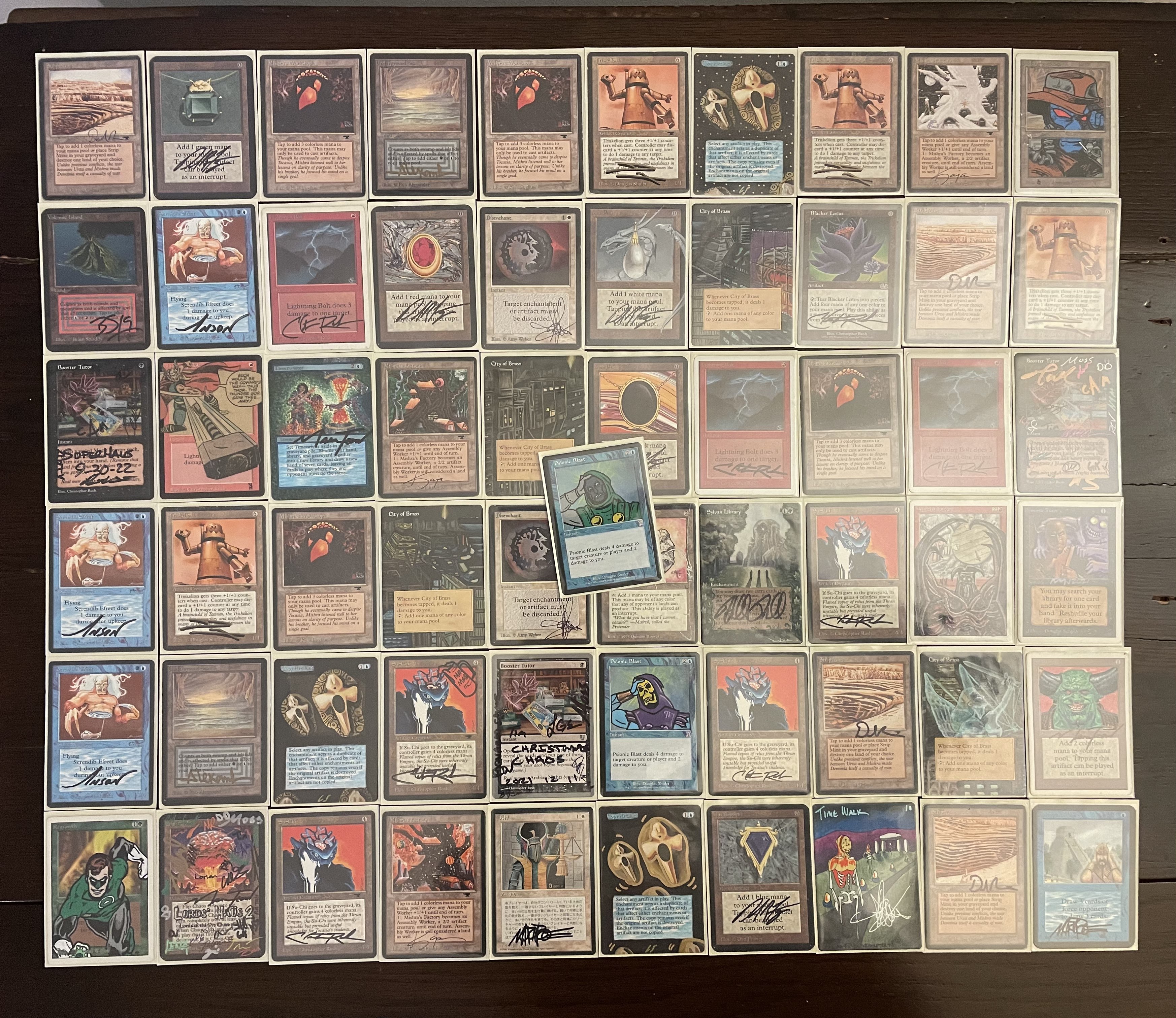 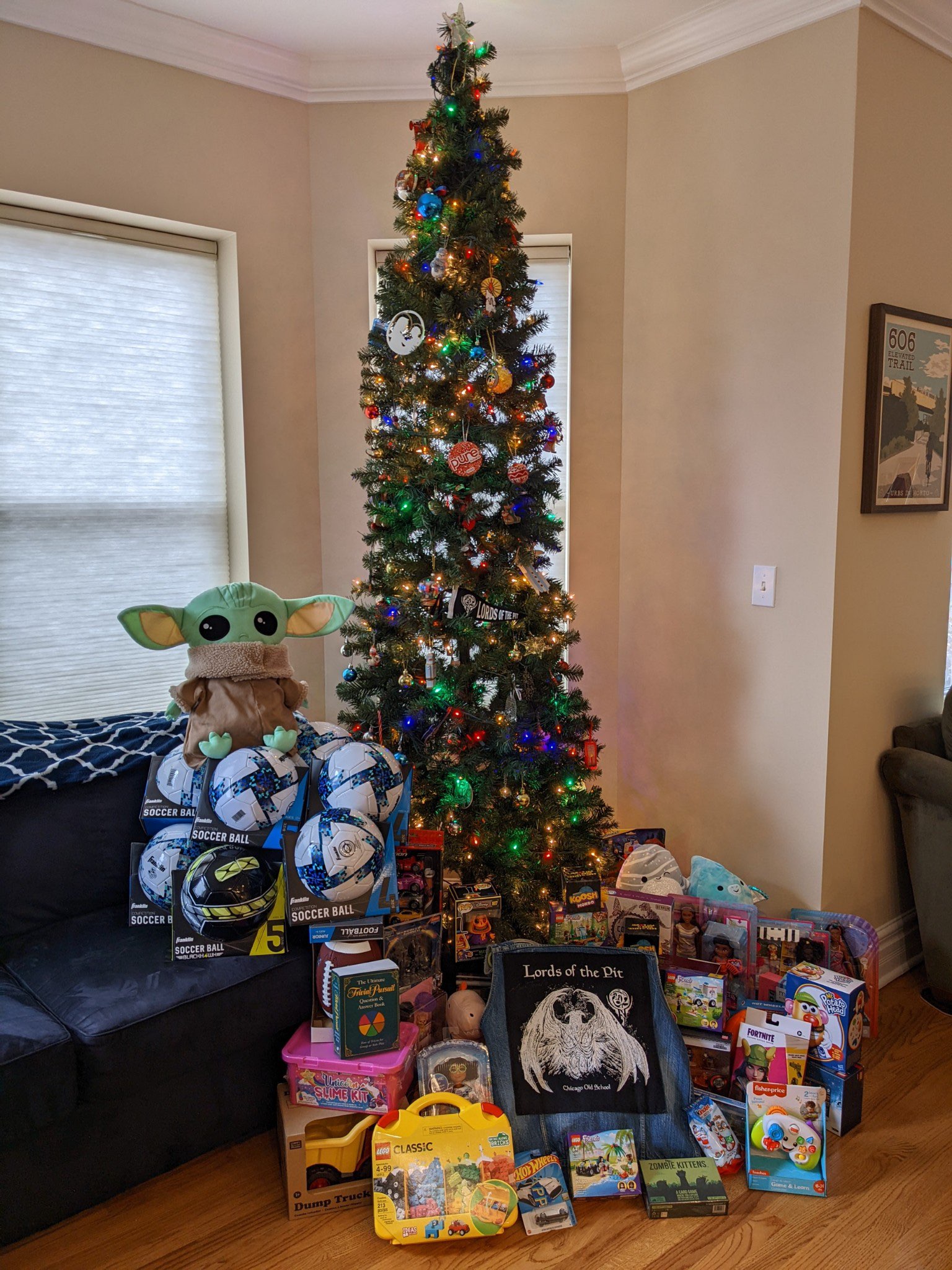 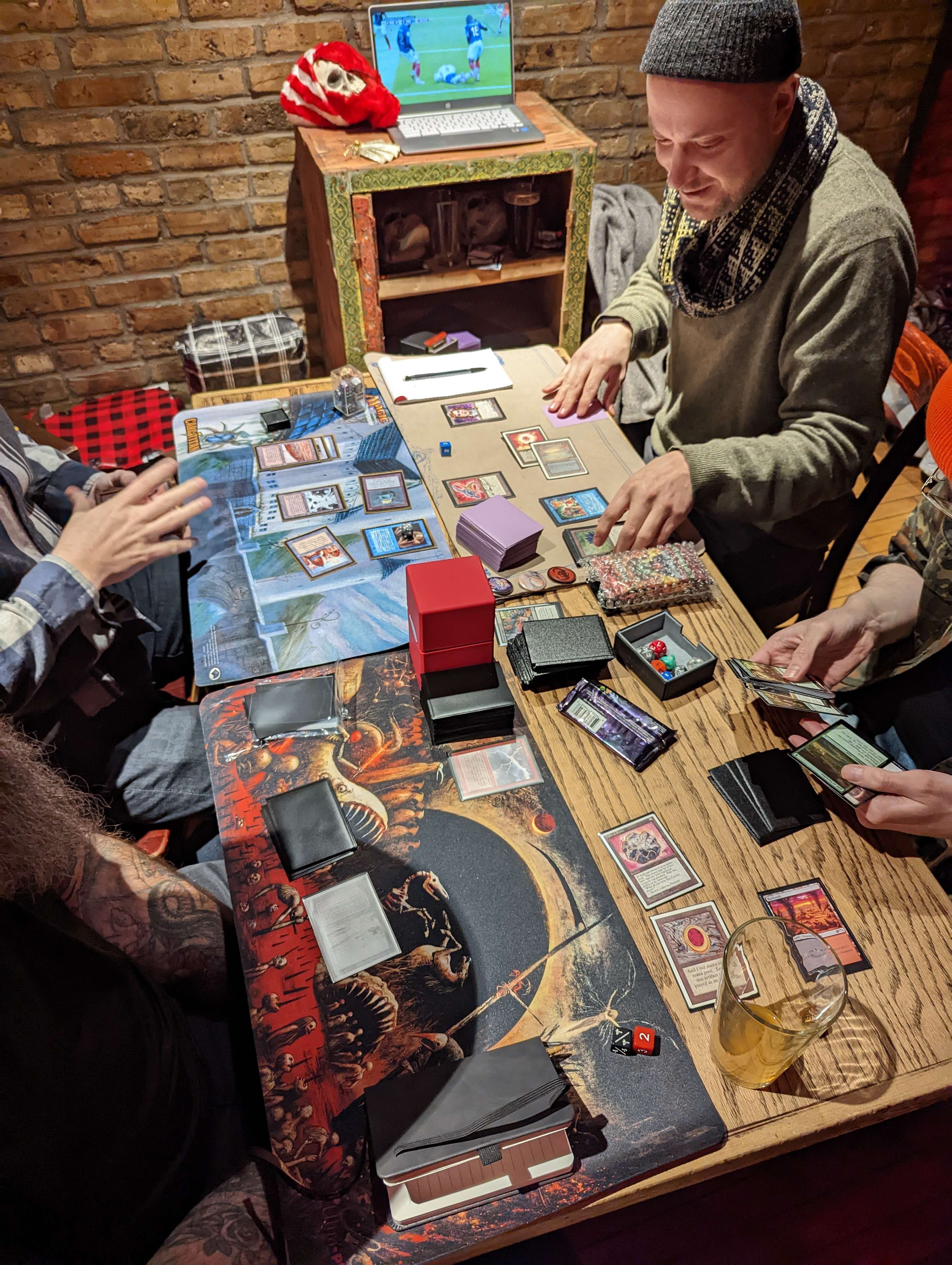 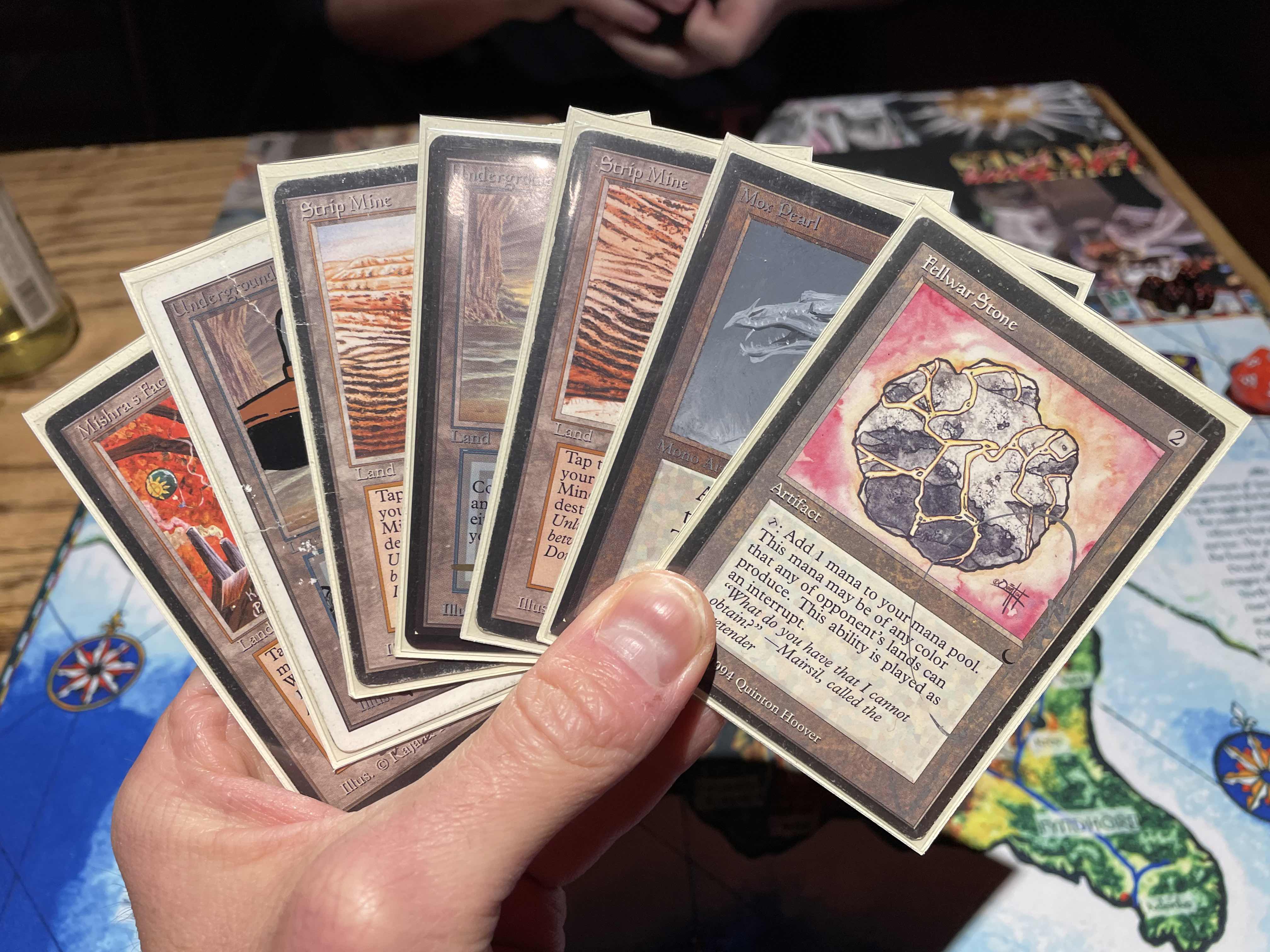 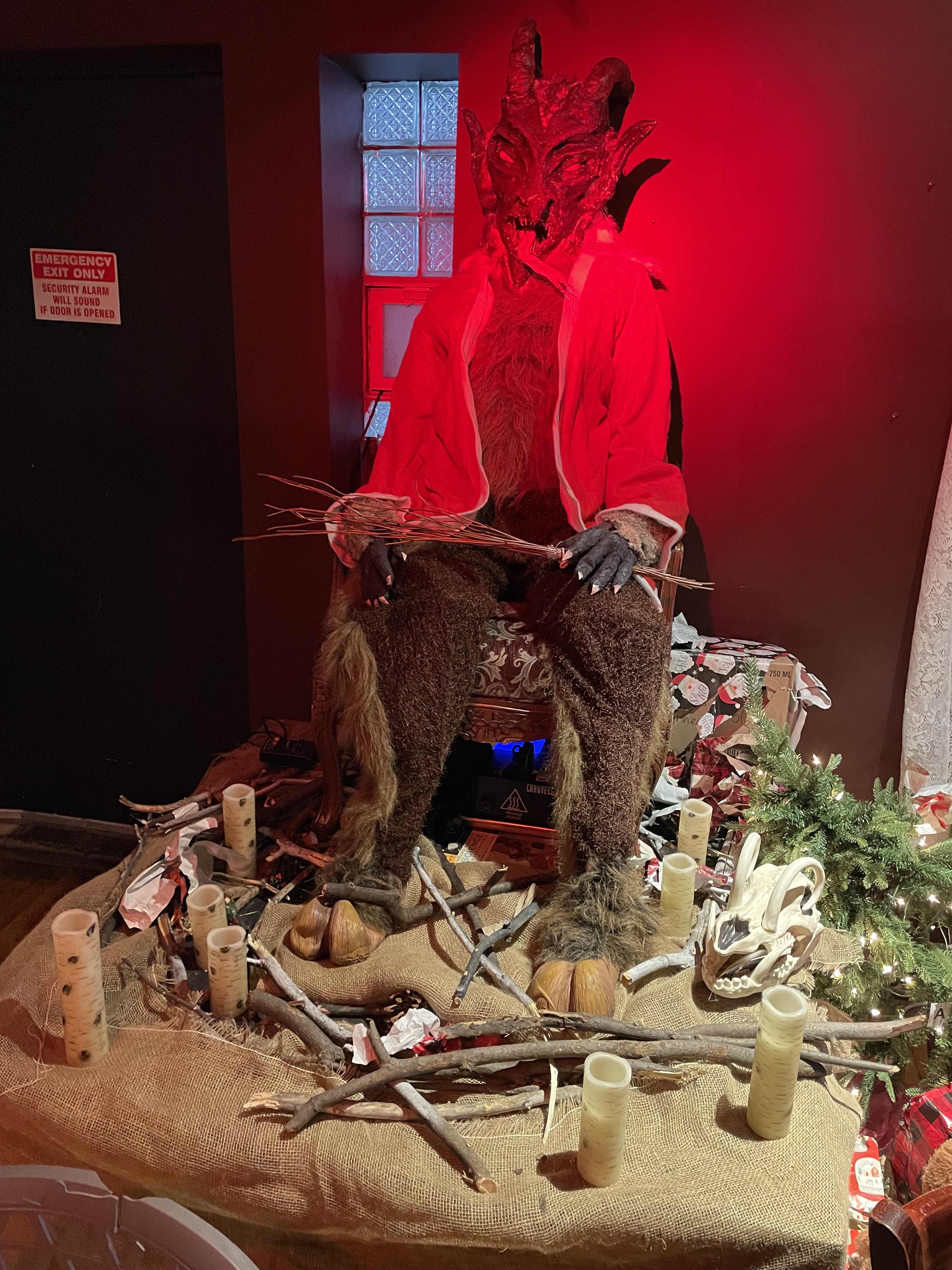 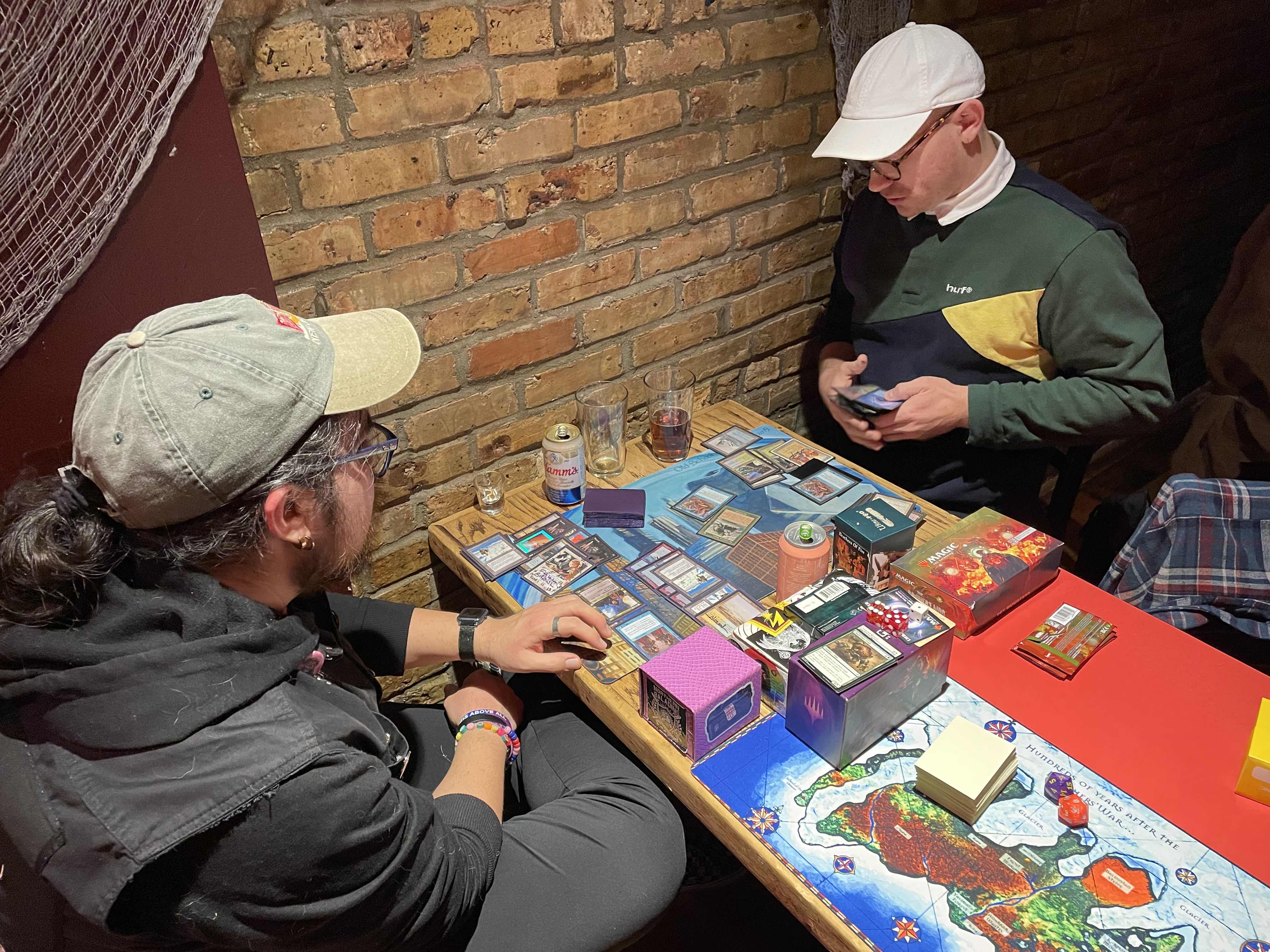 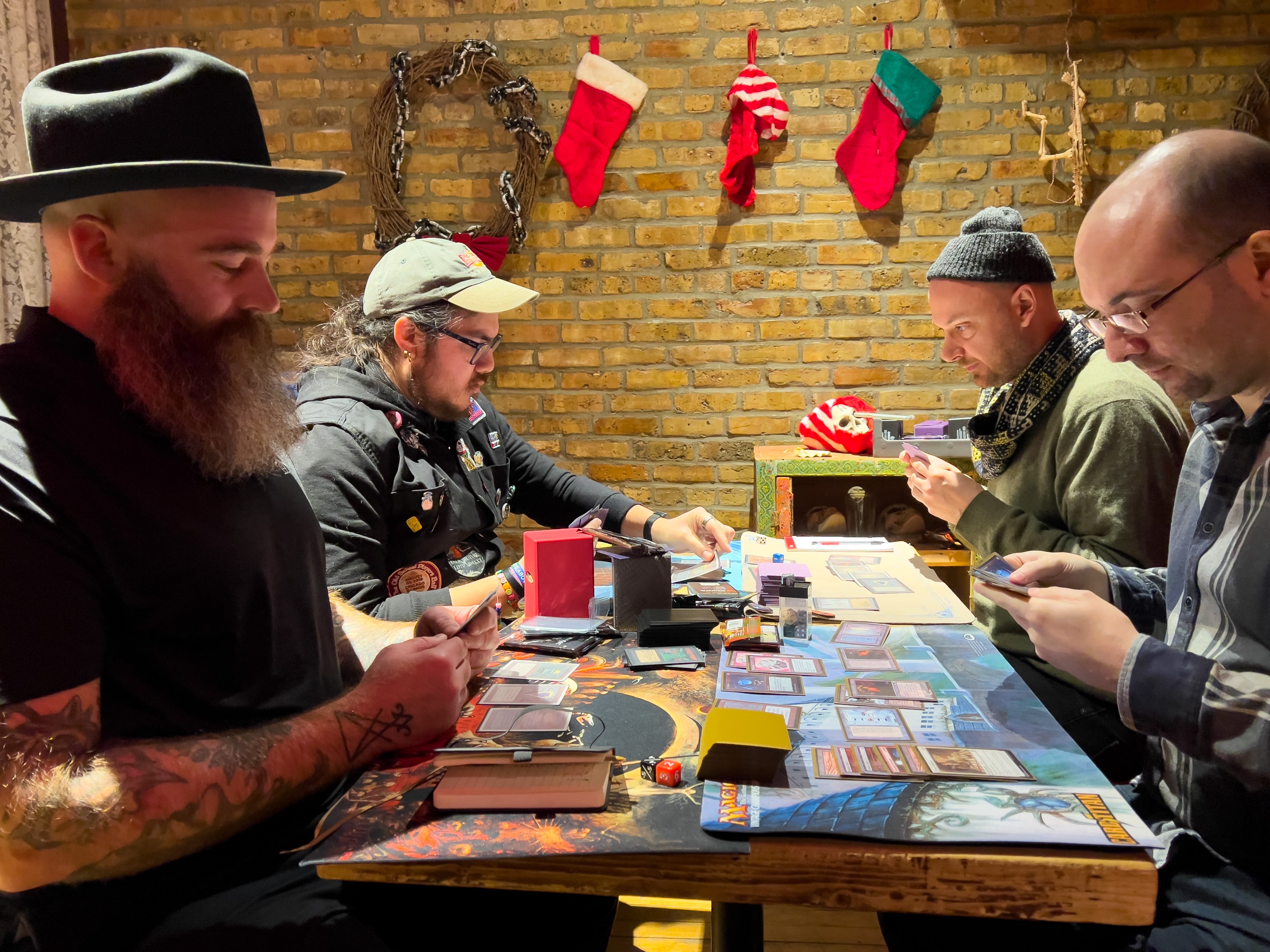 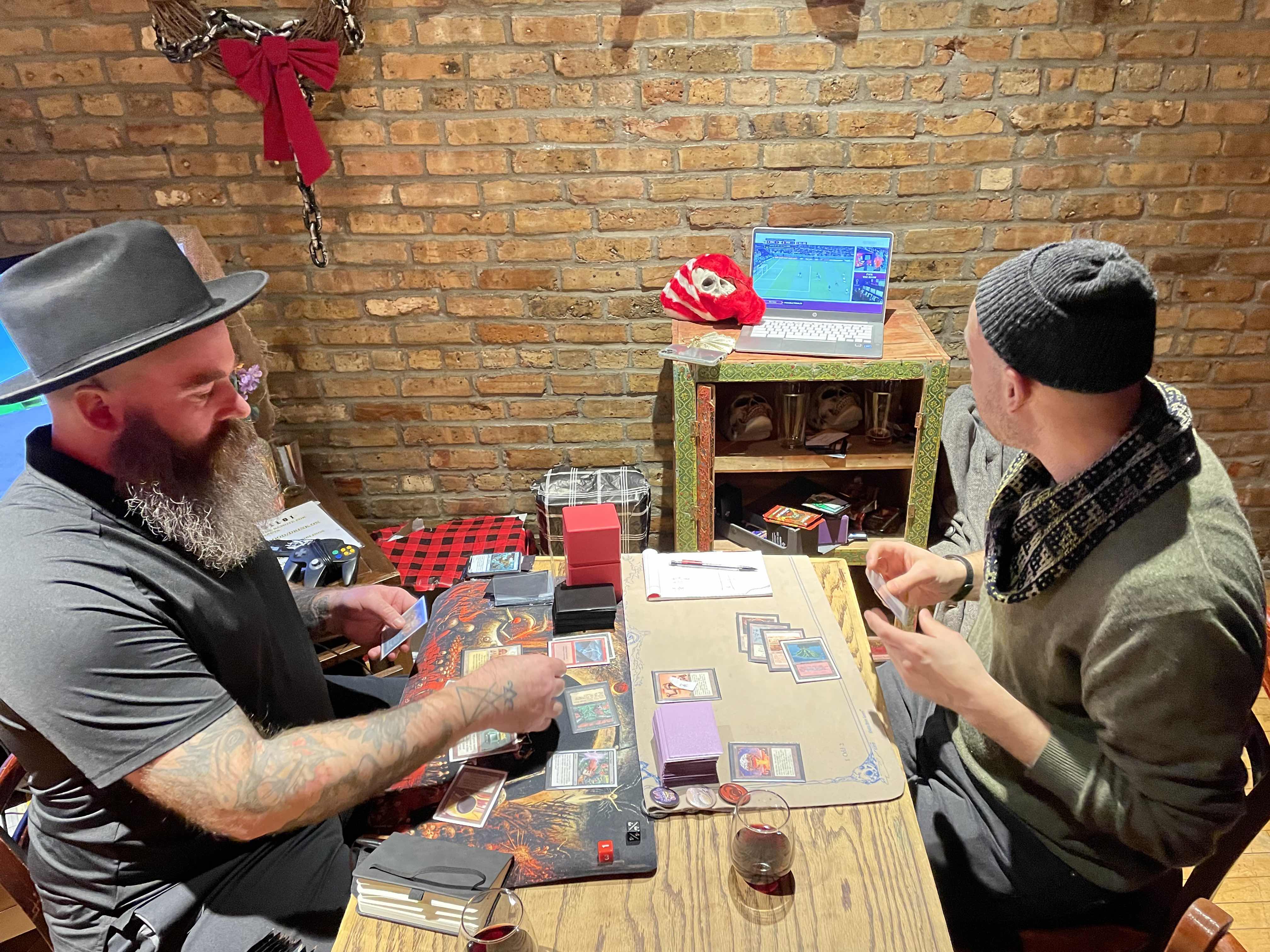 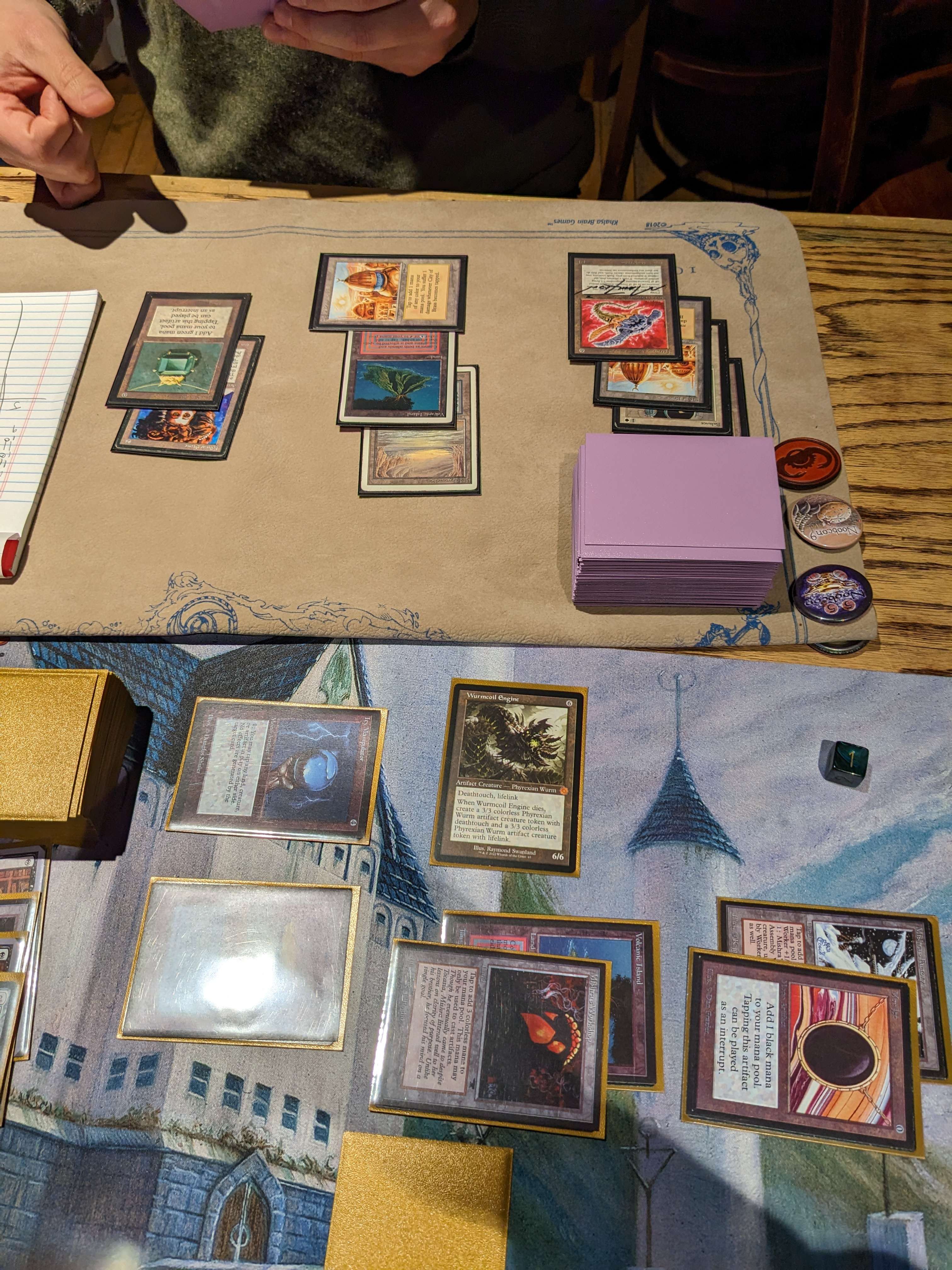 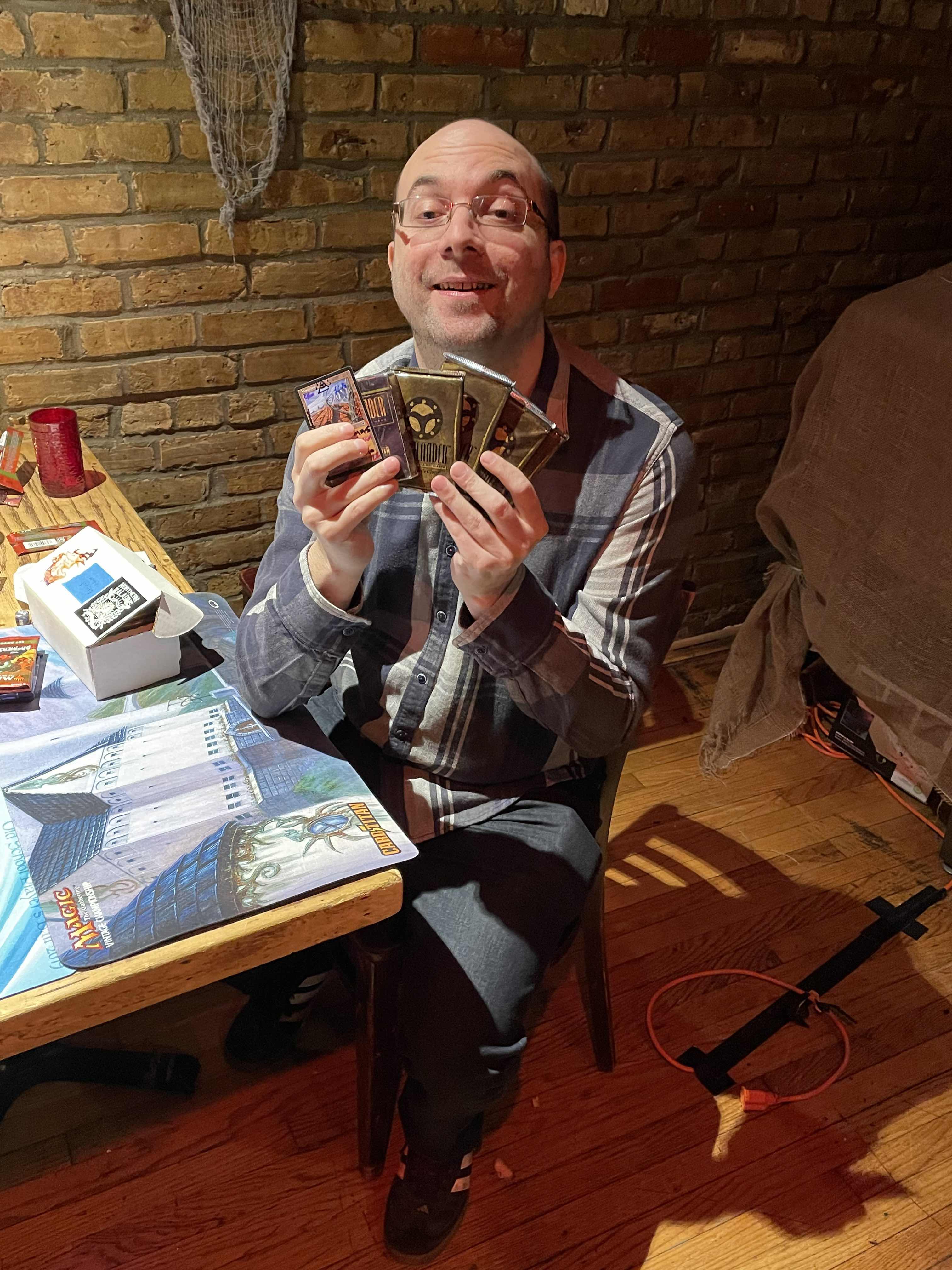 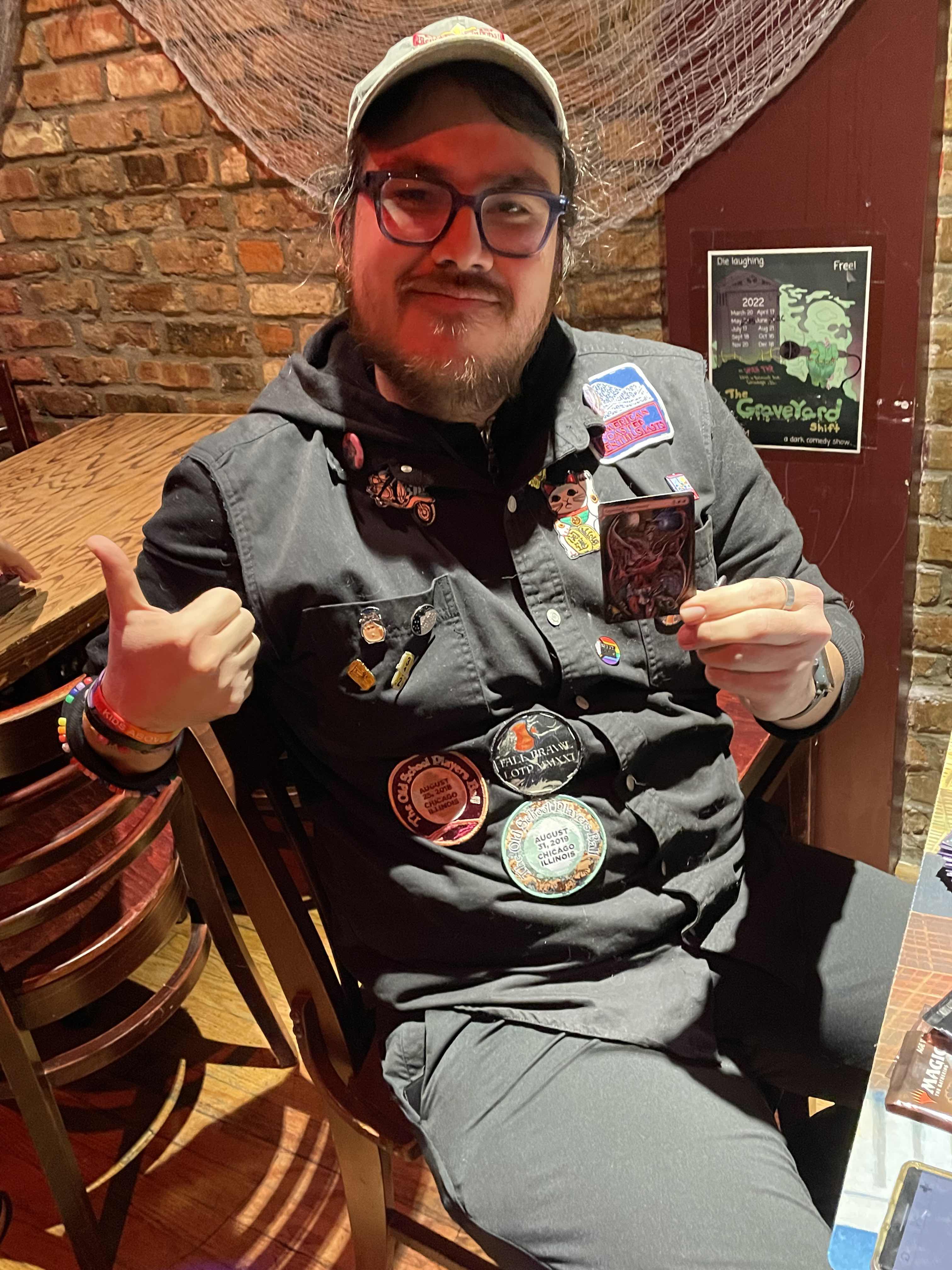 The Lords want to give an extra special shoutout and congratulations to Team Serious member and friend of the Pit, Rajah James, for his triumph at the Eternal Weekend Vintage MTG tournament in Pittsburgh, PA. Well done, Raj! 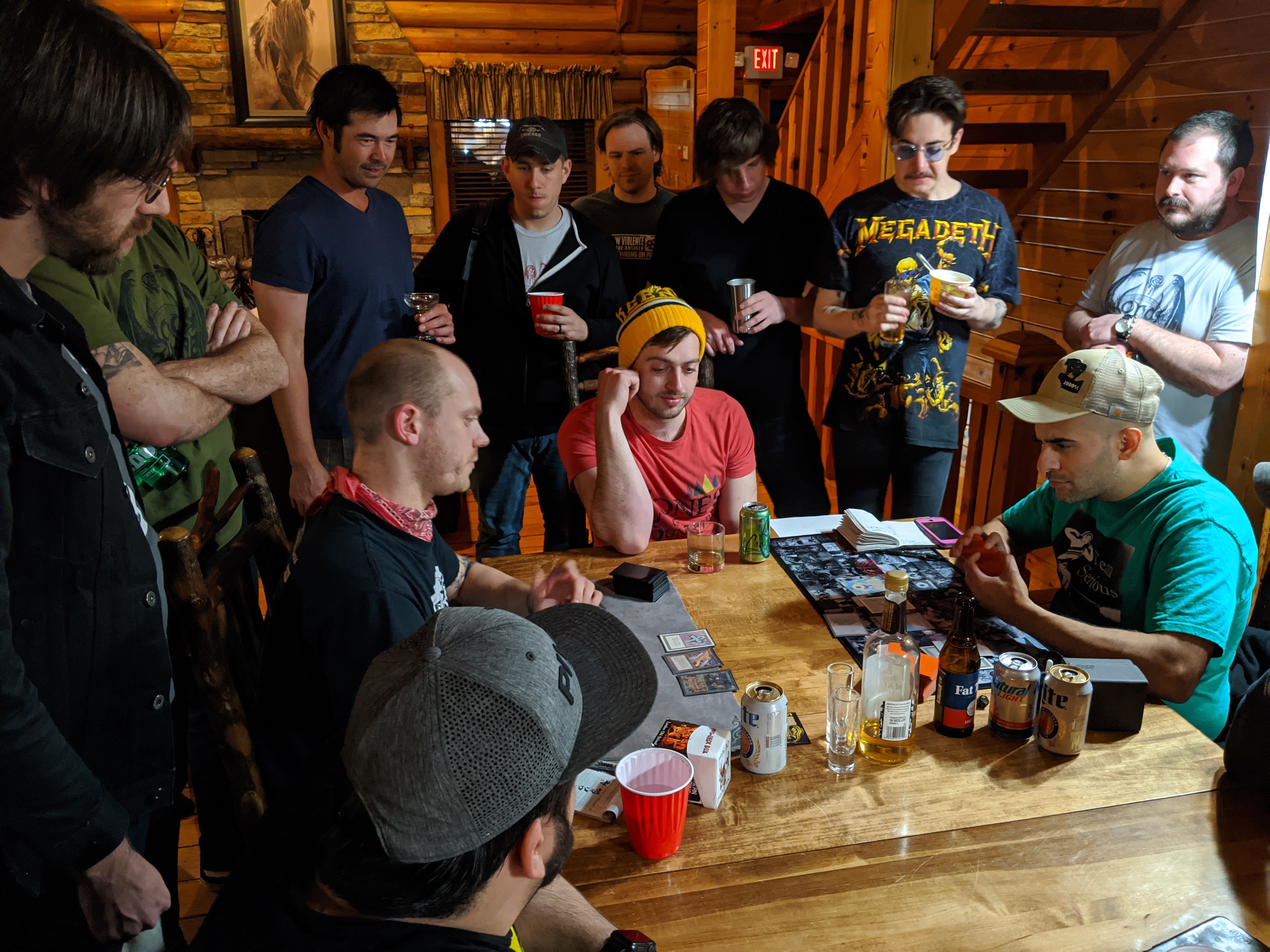