But such a fantasy could not last for ever. The power of my first Old School love was calling. It was time to go back to her. None of the other decks could match her allure, her power, her greedy mana base, or the reactions or revulsions she gets from the Old School denizens far and wide. For too long - in the middle of the night - I would sneak away for a surreptitious encounter. Arrange a 75, shuffle it up, feel the power. It would then get broken apart, its cards back into its binders or into suboptimal builds to appease the “community.”

I had quietly upgraded many cards in the forbidden list from the original revised, to FBB, to CE, to several betas; but they did not publicly come together as a 75. I spent the past year dabbling with a variety of decks that were fun to take out for a fling. At the 2017 Player’s Ball I played RUG Zoo in a room filled with other aggro and mid-range decks. The deck was fun and its tempo game was strong. It swept the swiss and brought me to the finals only to be crushed by the formidable Steve McGrew on Bant-geddon. The Top 8 was all midrange or aggro. Over excited players bloviated that control was not viable in EC. Endless squabbling over Strip Mine as an oppressor or liberator. Complaints about Kird Apes and Lions. Efreets and Bolts. 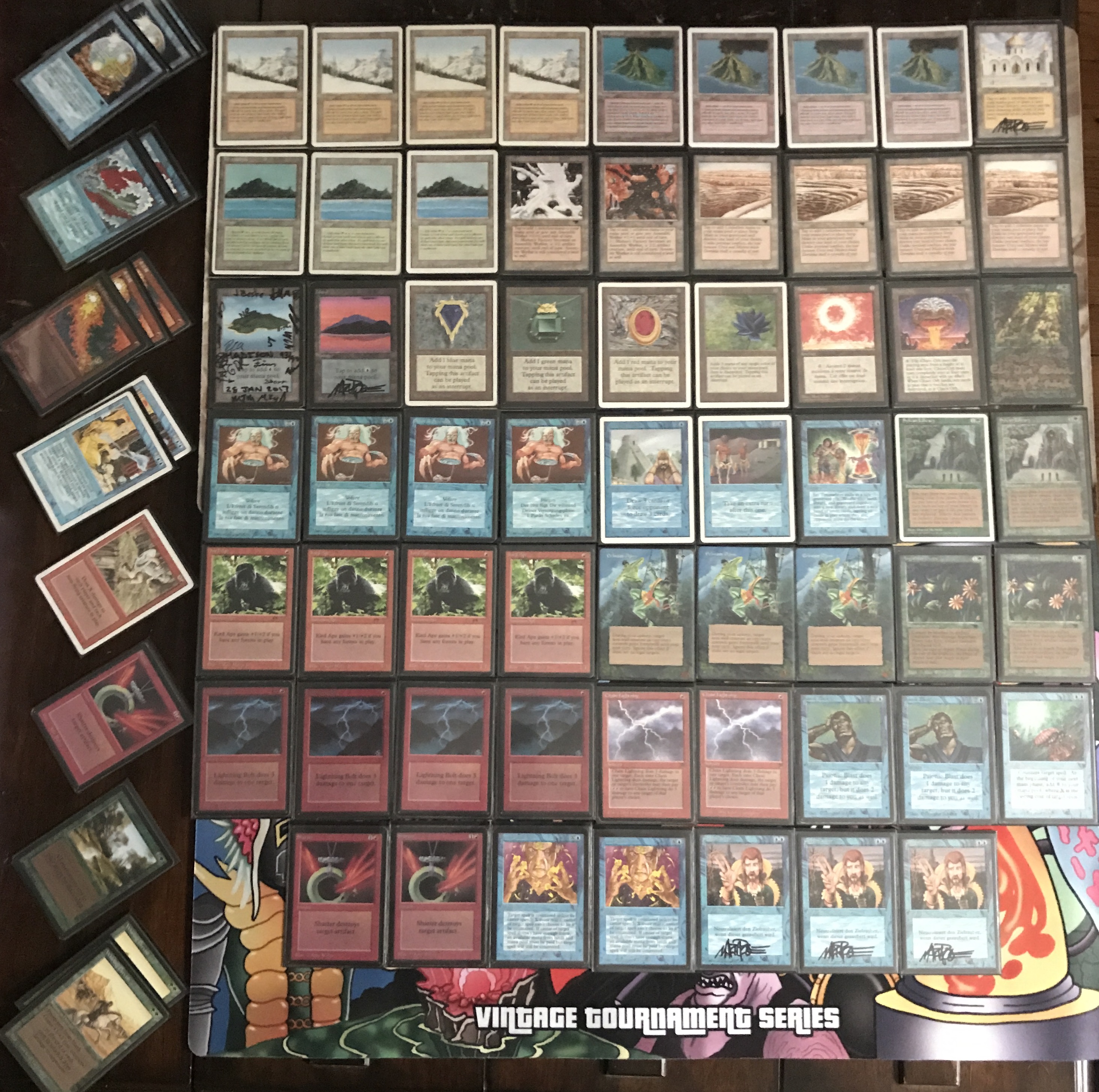 Lost in the noise I could no longer resist the call of my forbidden Old School love. It was time to free The Deck.

The community openly derides The Deck and those who shuffle it up. The community reviles its power, its complexity, and its beauty. They rail against the dark side, spew the interwebs about trying too hard or fairness. In response, I kept my running affair with The Deck underneath the surface as I played Zoo, Dreams, Monolith, Mono White, or Fatties. It is not that I do not enjoy playing those decks. Several have lots of interesting interactions, or beat down quickly to fit in more beer. But they could never match the thrill of that first love.

A recent Chicago event gave me a chance to skate around the taboo of running something too powerful. For the Lords of the Pit decided to run a small Swedish rules event, the Relic War II, to send off Danny Friedman as he left for drier, hotter pastures. I took the chance to take my girl out on the town – for The Deck is often associated with the Swedes and its presence would bring less of an outcry. 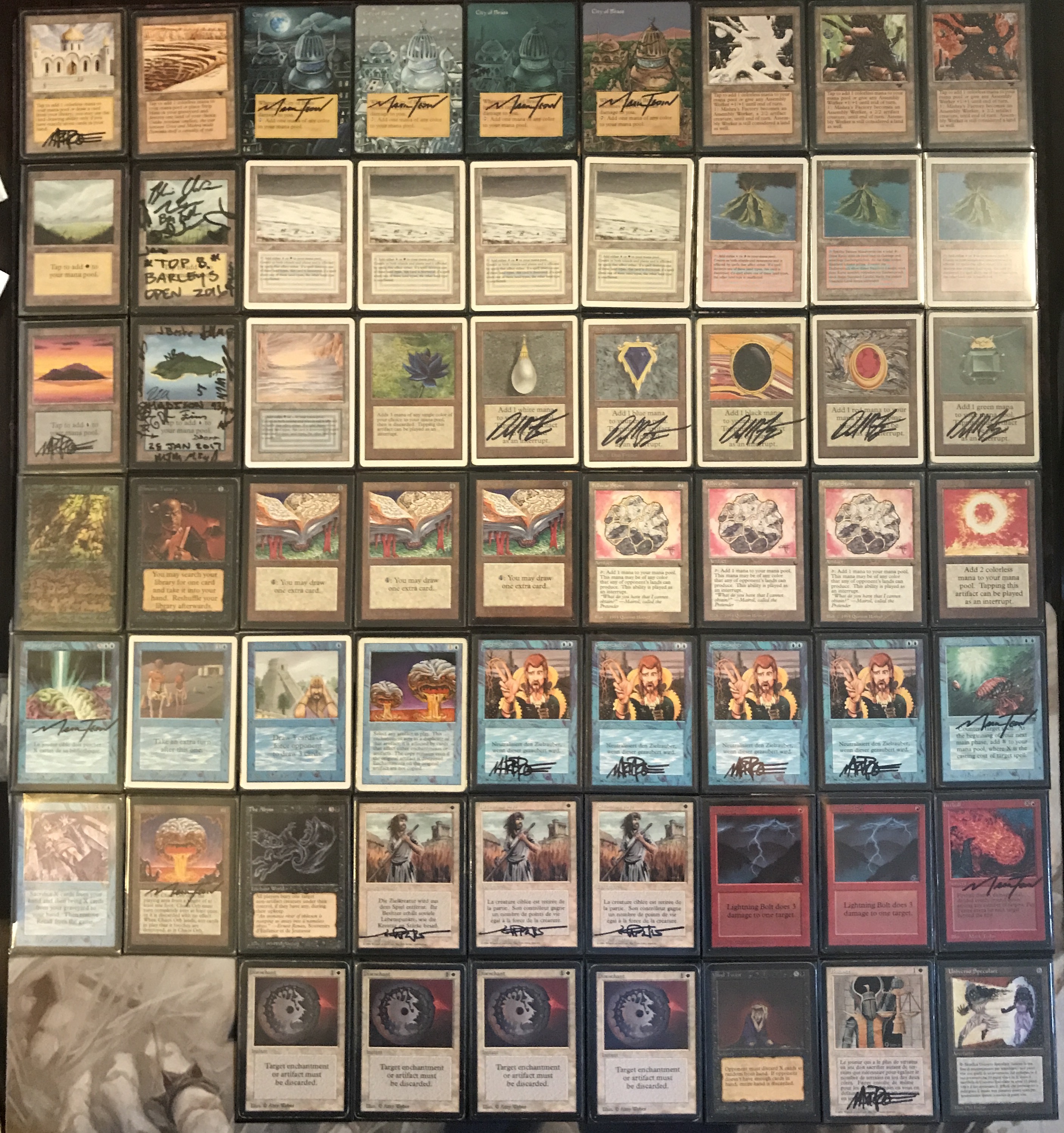 The Deck was insane. In the slower meta that arrived with only one Strip, she dominated the field. But she also had a good time and several close calls. As this is a story of romance, I will not bore the reader with a blow by blow of the 6-0 streak, but will instead recall several enjoyable memories The Deck and I had at the event.

In round 3 I am getting drunk on the power (and on the stream of DMen brews on tap) and I face Bob on Dreams Combo. I manage to take the match in 3, but only after losing game 2 with a COP Black in play and mana open. I was so excited to draw cards that when Bob cast Timetwister I forgot I had to pay mana for the COP and thanks to 3 dreams in play I took 21 to the dome. Whoops. Luckily, The Deck did not mind such rough handling and dispatched Bob quickly in G3.

Round 4 was an epic chess match against Chris on R/G Prison. The inclusion of basics paid off big time. I had brought 2 Blood Moons in the board for the mirror match, and as a side benefit I was better suited to face main deck Blood Moons. The Deck wiggled out of the impending lock.

Finally, round 6 was a shit show vs Charlie. We agreed to remove Library of Alexandria and Mind Twist to have a match more suited to the gentlemanly atmosphere and our level of inebriation. I don’t remember much, but I do remember Charlie killing off his own creatures for good measure. The Deck won the day to the boos of the crowd. Long Live The Deck.

I stumbled through the front door that evening and I could not yet bear breaking her up to be farmed out to inferior decks. We had finally been reunited. The Player’s Ball was around the corner and I did not have a list set aside. I whispered my tentative intentions to bring her back out to several confidants. I received near unanimous feedback: “Fucking do it.” I discovered secret supporters of the dark power mingle among the masses. And so, empowered with their encouragement I took my Belle out to the Ball. 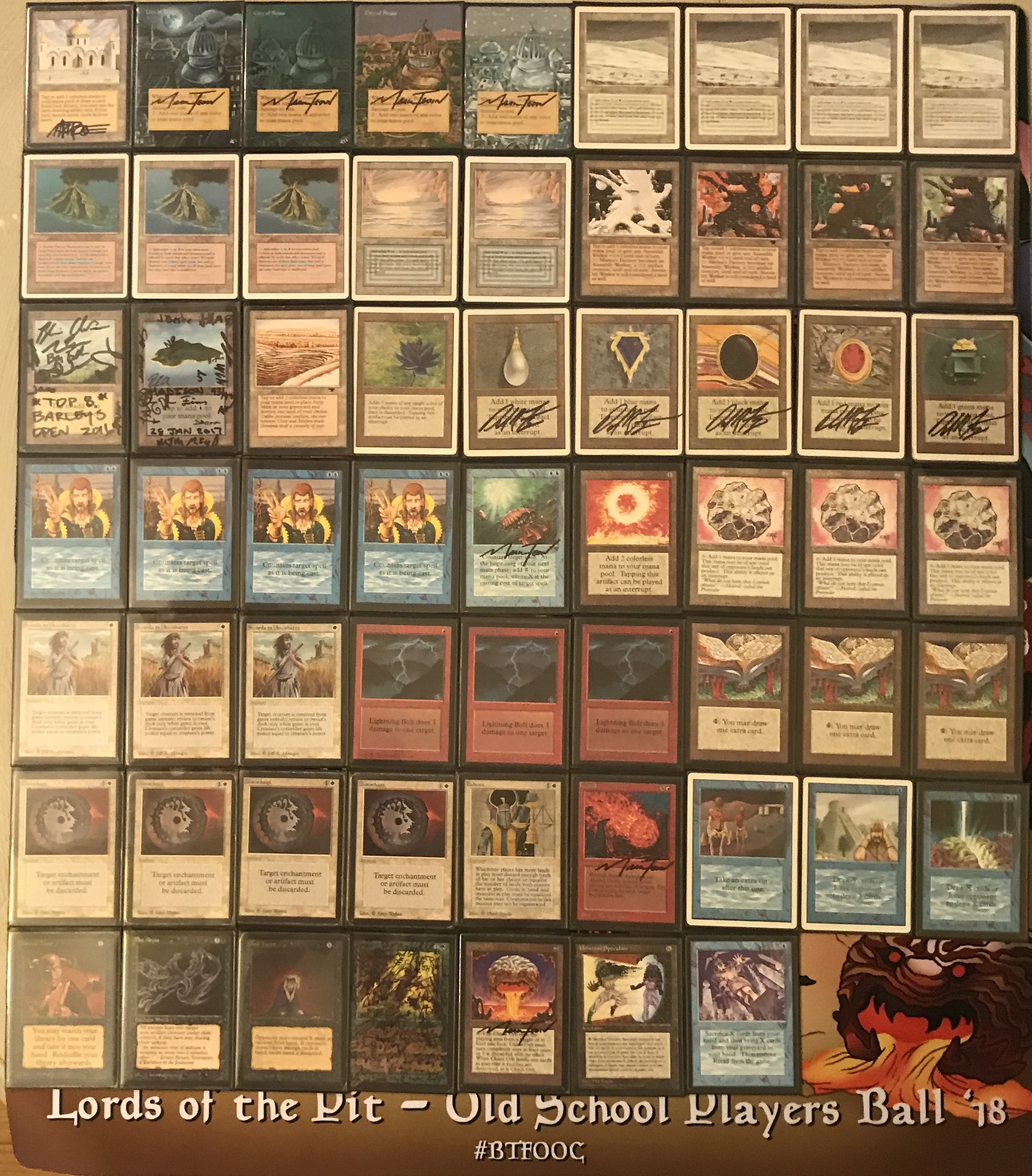 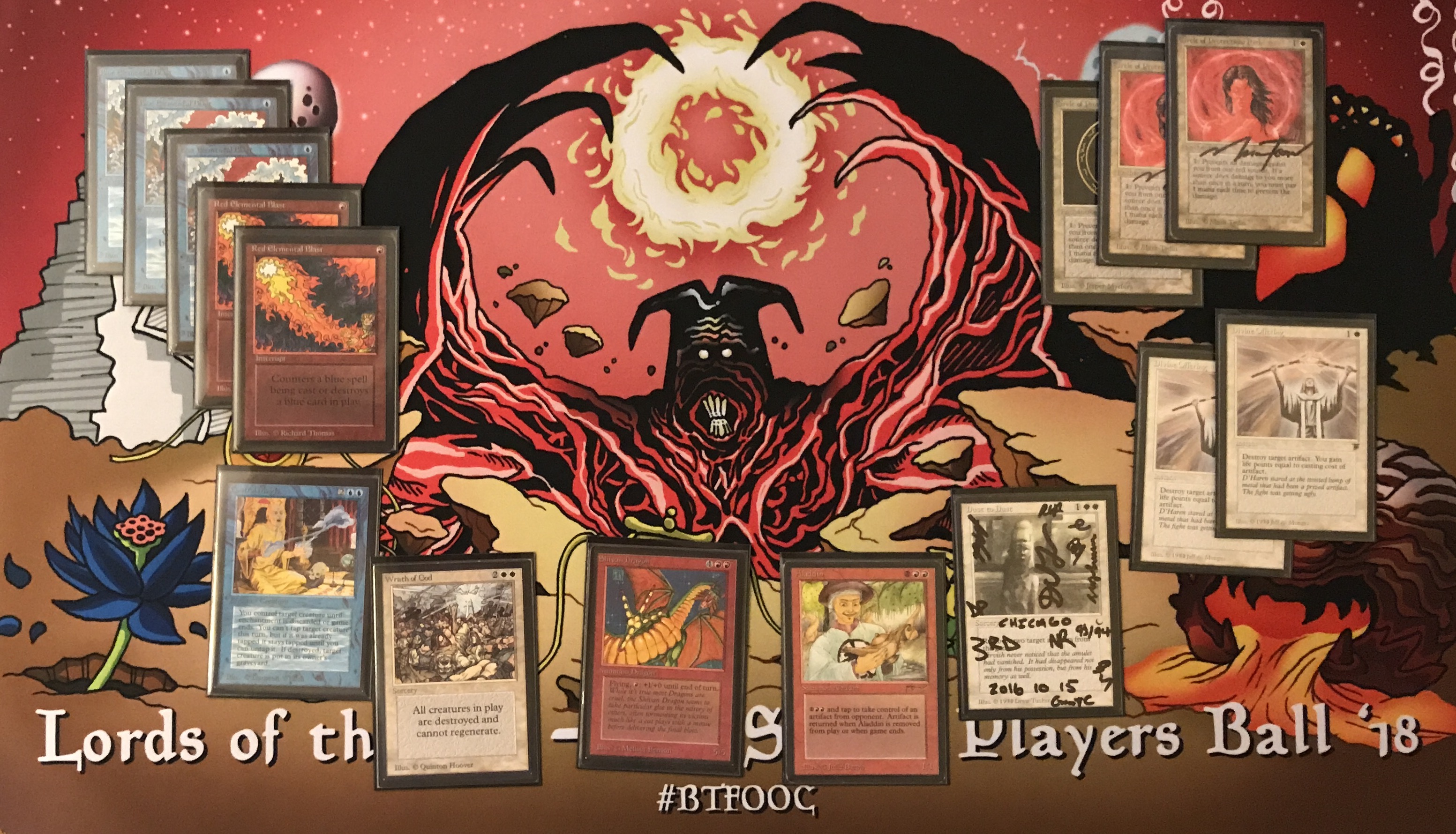 I fiddled around with a list sans Factories playing Moats, plenty of basics, and four Strip Mines. But I found the basics to be a liability in a 4 Strip World. Moat was powerful, but I really wanted to skew red with my Beta Bolts. So I settled on a list very close to the Relic War. Mirror Universe had been great, especially when paired with bolts in the main. I am grateful Danny convinced me the morning of to cut the Copy Artifact for a 3rd Bolt and Shane happened to have an extra Alpha Bolt while smashing down breakfast chimichangas. What a guy. I also kept the Strip count at one. I did not expect to see a lot of control given the social stigma to so much power, and against all the aggro beat down I really wanted consistent access to colored mana.

The Deck was again great and my play was again medium. Despite the punts, The Deck delivered a 6-2 finish in the eight round swiss +1 event. The day was long at eight rounds but it was a blast to see so many friends from across the country. Every table I sat down out there were friends old and new. The Deck was happy to be out in daylight and managed to overcome 4 turn 1 Libraries in the opening 6 games to start the day 3-0. Mind Twist is a hell of a card. I cannot recall what round I faced him, but shout out to Mark who, on a ‘geddon list, brought prize cards for his opponents to randomly select. I scored a bad ass Beta Mons Goblins that he happily signed for my collection. I dropped the fourth and fifth rounds but rallied to sit down in the final round for a shot at Top 8 against non-other than Steve McGrew, the inaugural Player’s Ball champion who dispatched me a year earlier. It was a great way to end the day in such a serendipitous fashion. The Deck must have been excited too because it delivered a G1 turn 1 then a G2 turn 2 Mind Twist + fast mana against Steve’s Libraries making for a mostly uneventful but victorious final match. Let it be known Steve put up one hell of a fight and almost won G1 despite the huge initial set back. The victory put The Deck in the Top 8 where she belongs snagging some sweet swag and I am sure plenty of jeers. 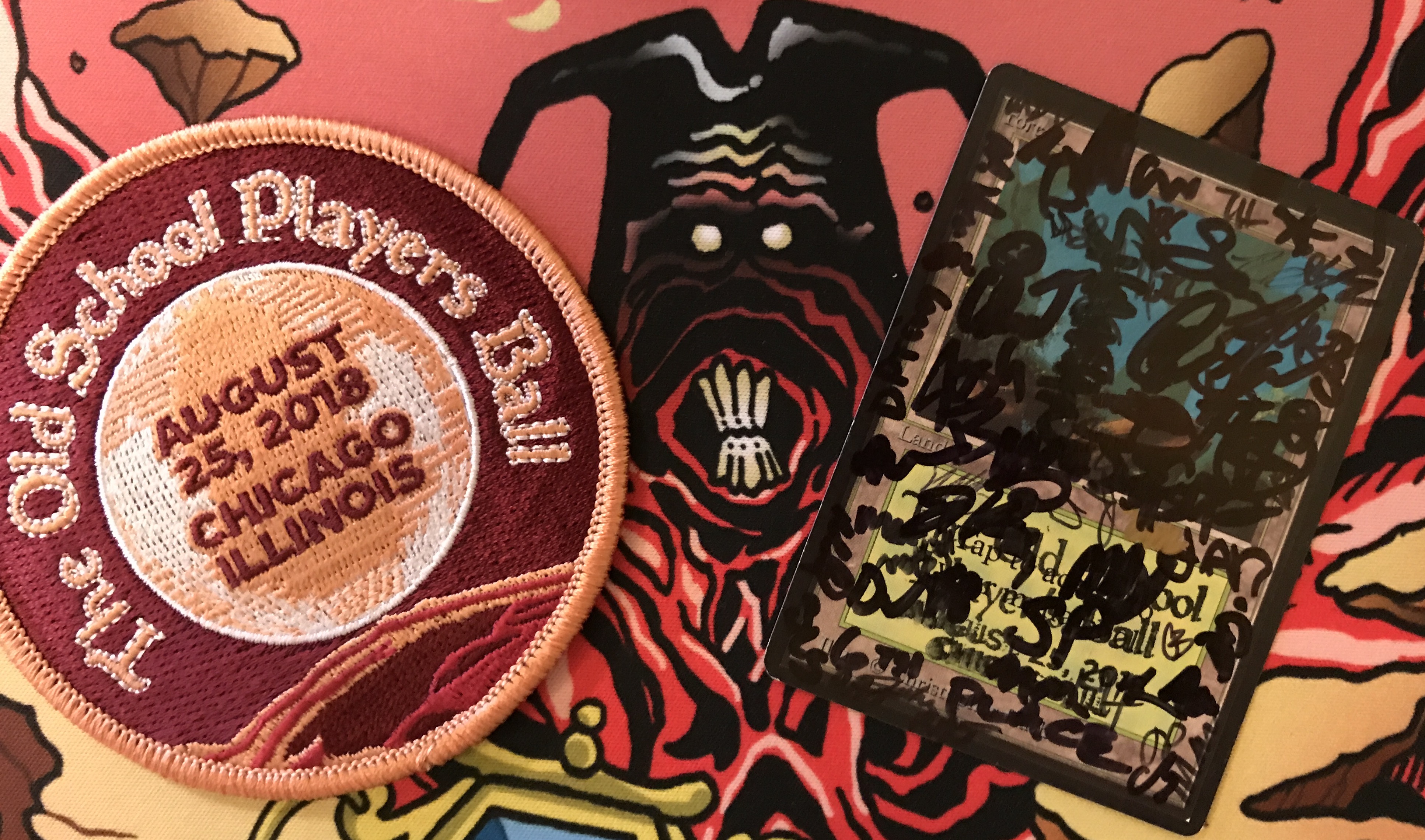 The following morning over a dozen folks rolled out for more Old School and there I got to meet Jon, the only other Deck player from the Ball. We jammed a slew of matches and geeked over card slots and sideboard choices. My main man Aladdin finally put in some work out of the sideboard in our matches, which made my day. Meeting another player invested in the power and undeterred by the social pressures against it was a true highlight of the weekend. At the end of the day, Bryan, who I faced off at EW with RUG, asked me if Zoo or the Deck was my baby. I assuredly informed him of the answer. 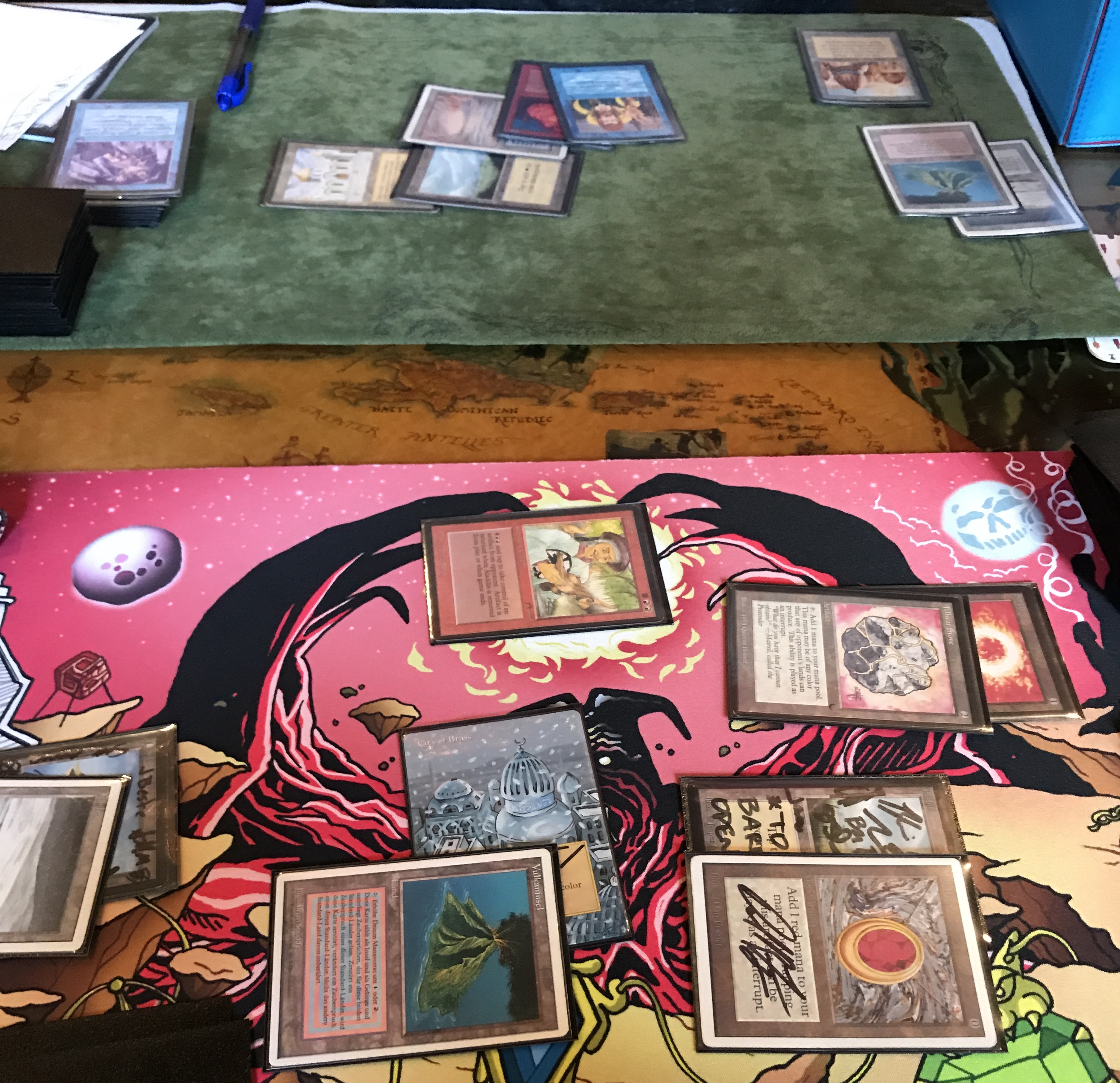 To summarize a long winded tale of forbidden love: Find what you love. Play what you love. Try not to be an asshole about it. Thanks to everyone who is “in on the joke” that is Old School and to the entire Chicago scene for a SIYAQ 3 years of playing a children’s card game.