…and so Gathered four mages, four April Fools, seeking to plumb new levels of despair during a stalemated battle of OS95-EDH. Our wedge Elder Dragon Legends were well-represented (BUG, RUG, Jeskai & Mardu) but relegated entirely to the Command Zone. Not one of the great wurms successfully summoned. Powerful enchantments ruled the evening, burying the assembled wizards in triggers and decision trees. 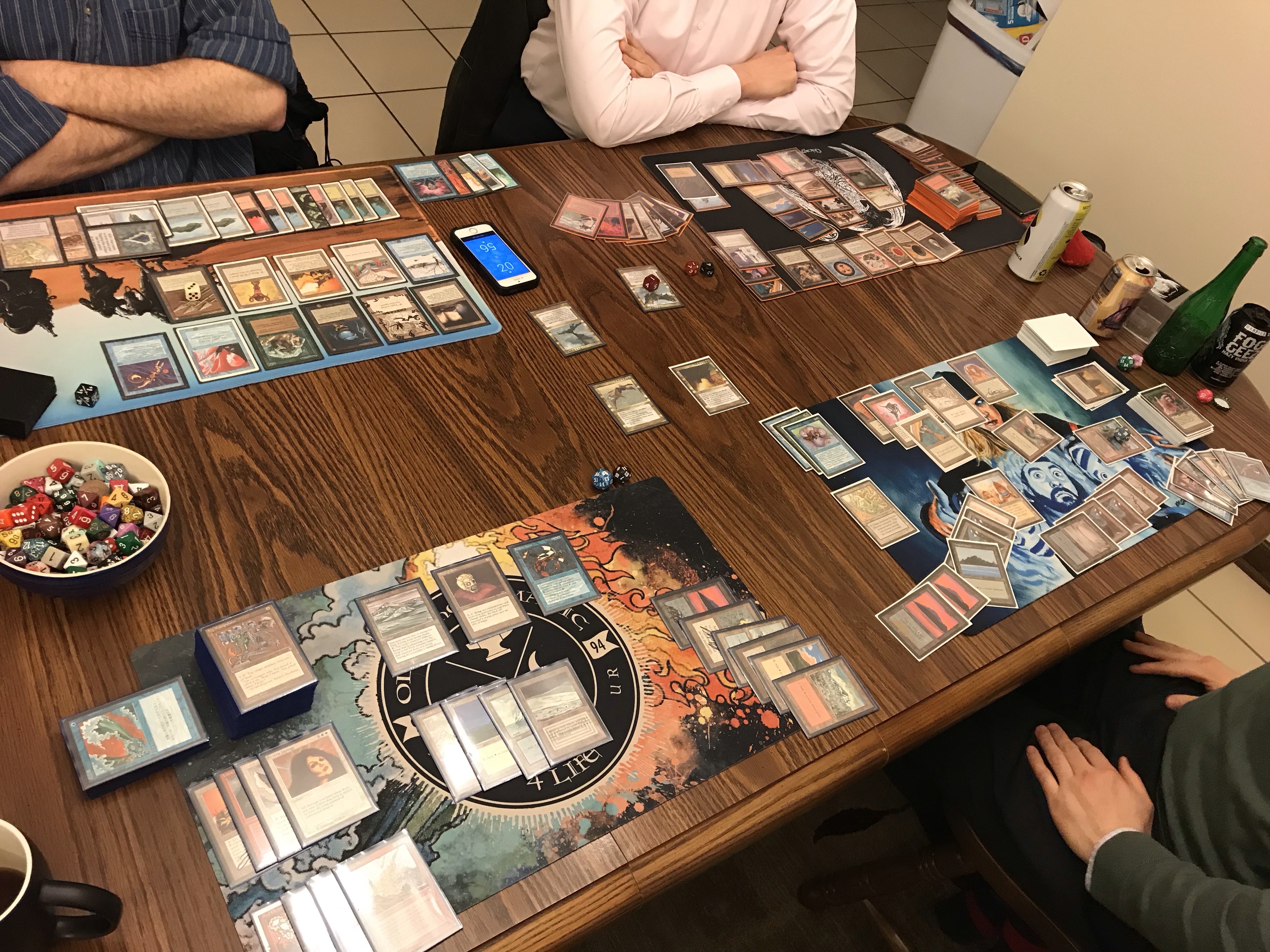 The battle started out with Moss (Jeskai) racing ahead on a T1 Ivory Tower, followed soon thereafter by Karma, Basalt Monolith and Vexing Arcanix, an Ice Age nugget that is essentially Millstone + colorless Shock. Moss drew aggro and was soon deluged by removal (two Desert Twisters, Disenchant, Jester’s Cap, Crumble, one and half Dust to Dust, Detonate, Tranquility, Gauntlet of Chaos, Tormod’s Crypt and, less we forget, Strip Mine). He ceased to be a factor in the mid-game and Arcanix became his rallying cry as each effect rained down on him, his own personal “Rosebud.” Order of the Sacred Torch* kept Schriver’s (Mardu) black magick at-bay while that early Tower plus a Zuran Orb + Balance combo kept him from being knocked out entirely. 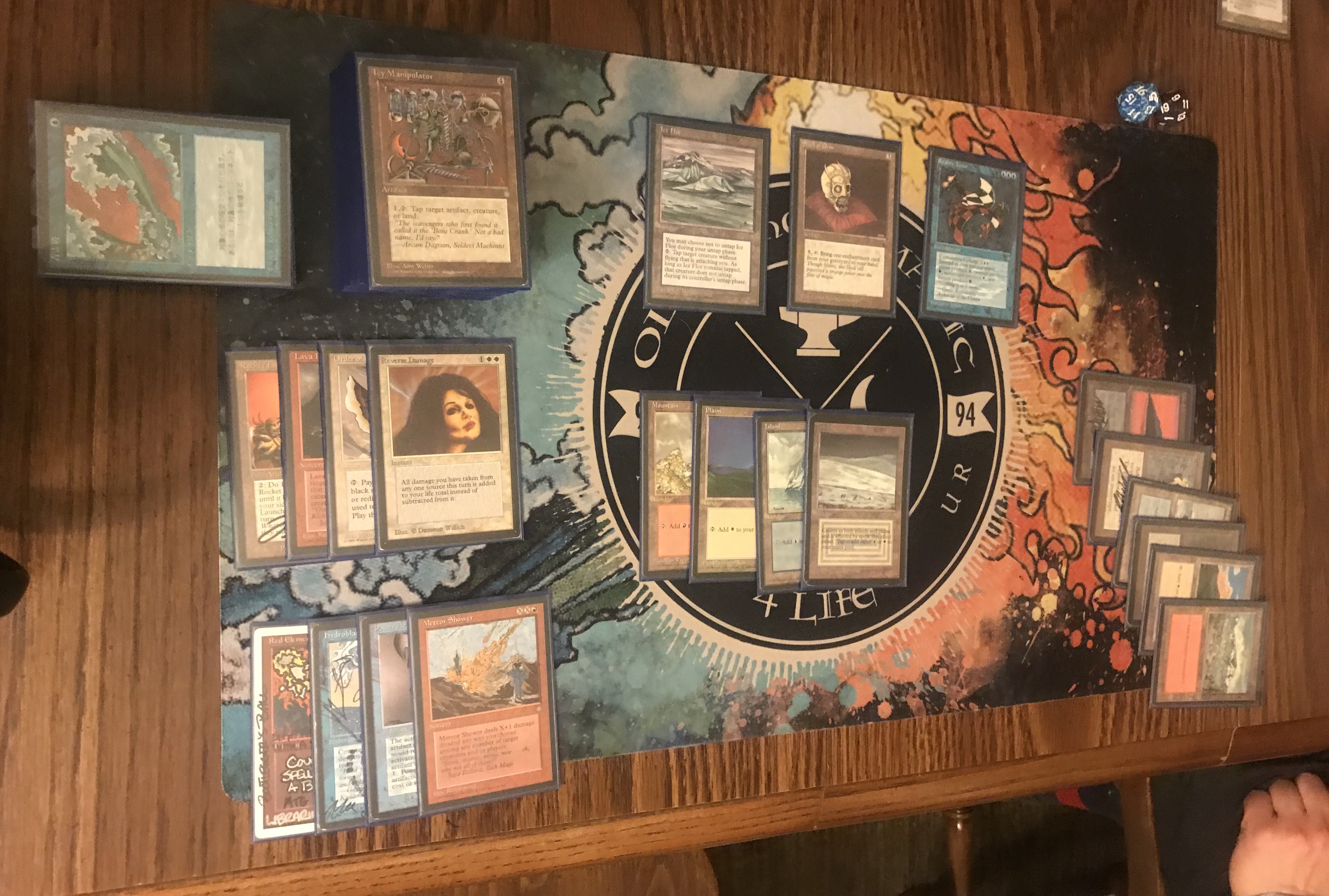 (*upon reviewing this card in Gatherer, we discovered it is even better than could be hoped for: Tap, pay one life, counter target black spell!)

The mid-game soaked up most of the match’s three hours and featured a permanents-based arms race between Semmens (BUG) and Piquard (RUG). Both wizards’ board states showed an impressive array of enchantments and artifacts with nary a board-sweeper to threaten them, as Piquard’s Nevinyrral’s Disk had been Arcanix’d away and Semmen’s fell to Zur’s Weirding (more on that below). Both men relied on impressive card advantage thanks to a wealth Sylvans, Tomes, and Howling Mine. Piquard amassed nearly 80 lives thanks to Thoughtleech and Lifetap before Shane deployed Mirror Universe, soon touching off an epic stack of Shatter, Blasts, Flash Counter, Power Sink and, finally, Boomerang. 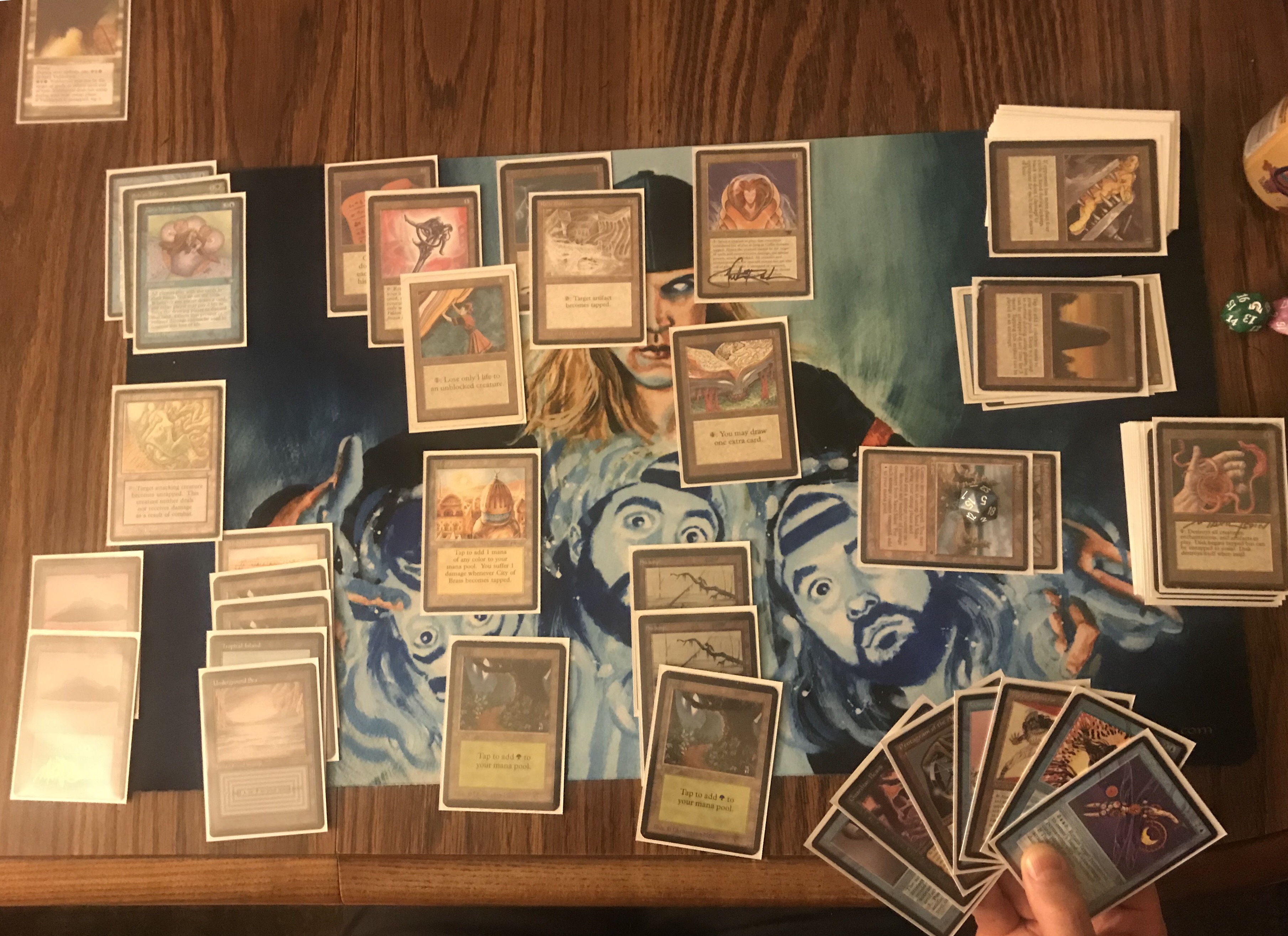 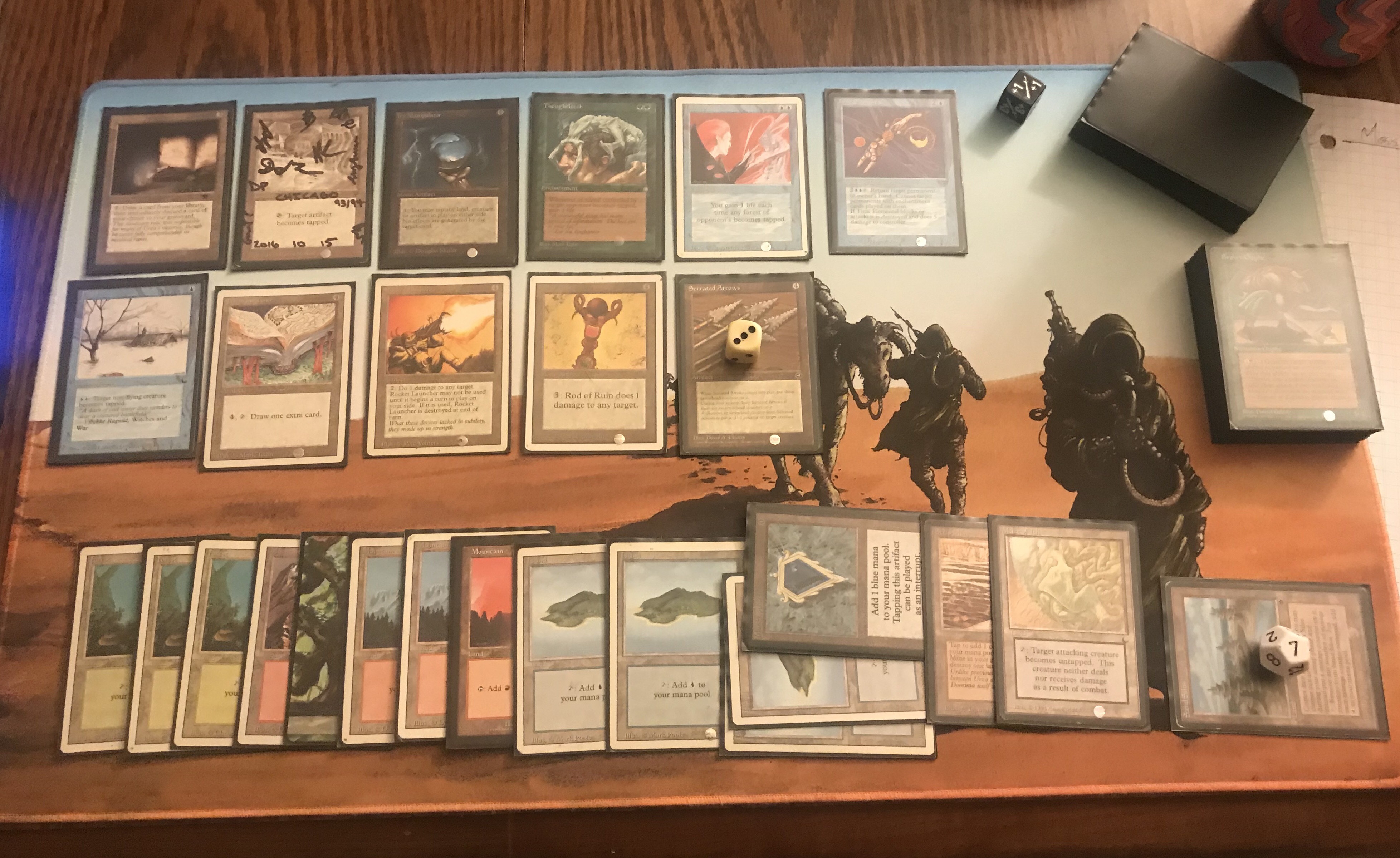 After the smoke cleared over the battle for Mirror Universe, we entered a mercifully short late-game. Schriver managed to keep Ashnod’s Altar and Nacre Talisman on his side, undetected. After a timely draw of Time Vault, Bill used the Talisman to stack up enough turns to deploy Enduring Renewal + Kobolds of Kher Keep, generate infinite mana via Altar and Fireball everyone out. But wait! Moss deployed a Hydroblast as last-ditch effort. Undaunted, Bill had a backup combo in-hand: Blinking Spirit + the aforementioned Talisman, and, thanks to Time Vault, the game was nevertheless ended and Bill impressively captured his second consecutive EDH victory and third overall. 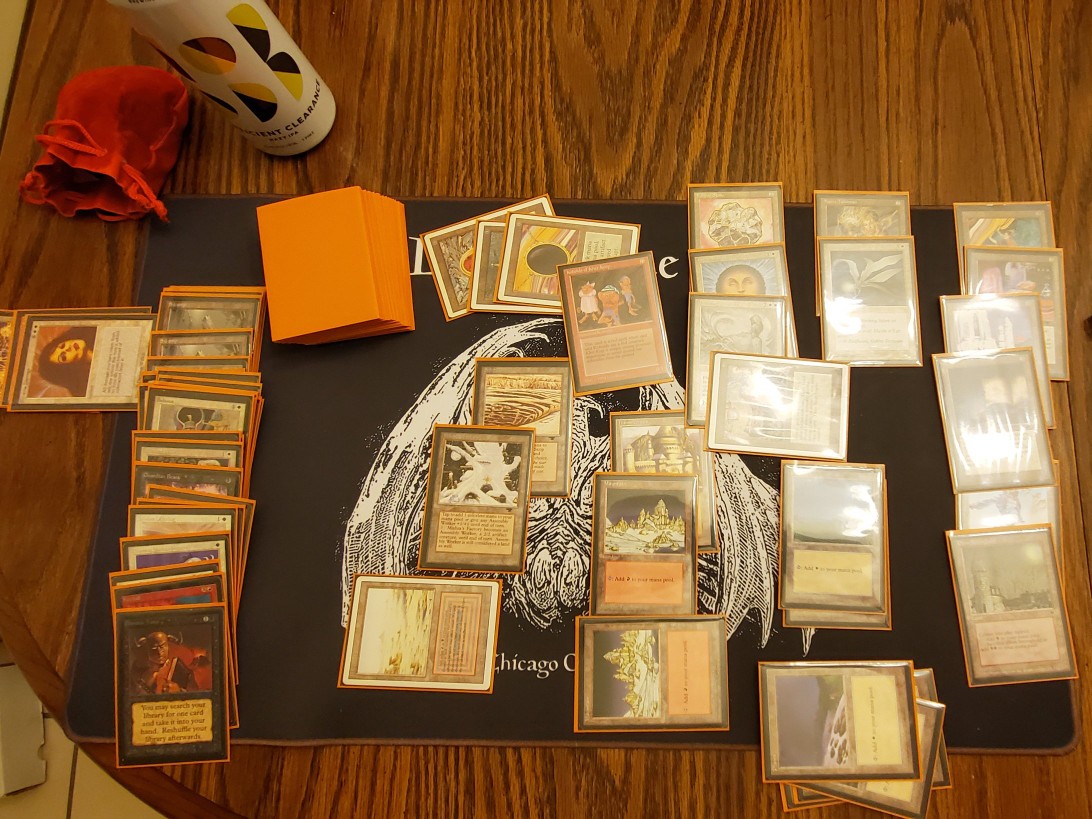 Among the numerous 1995-era cards to see the battlefield (Vexing Arcanix, Jester’s Cap, Nacre Talisman, Ice Flow, Reality Twist, Pentagram of the Ages, and so on), perhaps the most disruptive was Zur’s Weirding. That Enchantment, plus Field of Dreams, allowed players perfect information, including revealed hands and upcoming draws, and the game quickly devolved to a standstill. Moss’ copy of Zurs Weirding was disposed of early in the match, but Shane’s stuck around, causing havoc for seemingly half the evening. Only after it was disposed of was Bill able to piece together his victory. Every single draw became a decision point and staring contest; who would take a Shock to prevent it? Lifegain + Zur’s Weirding would make a truly oppressive strategy in future matches. 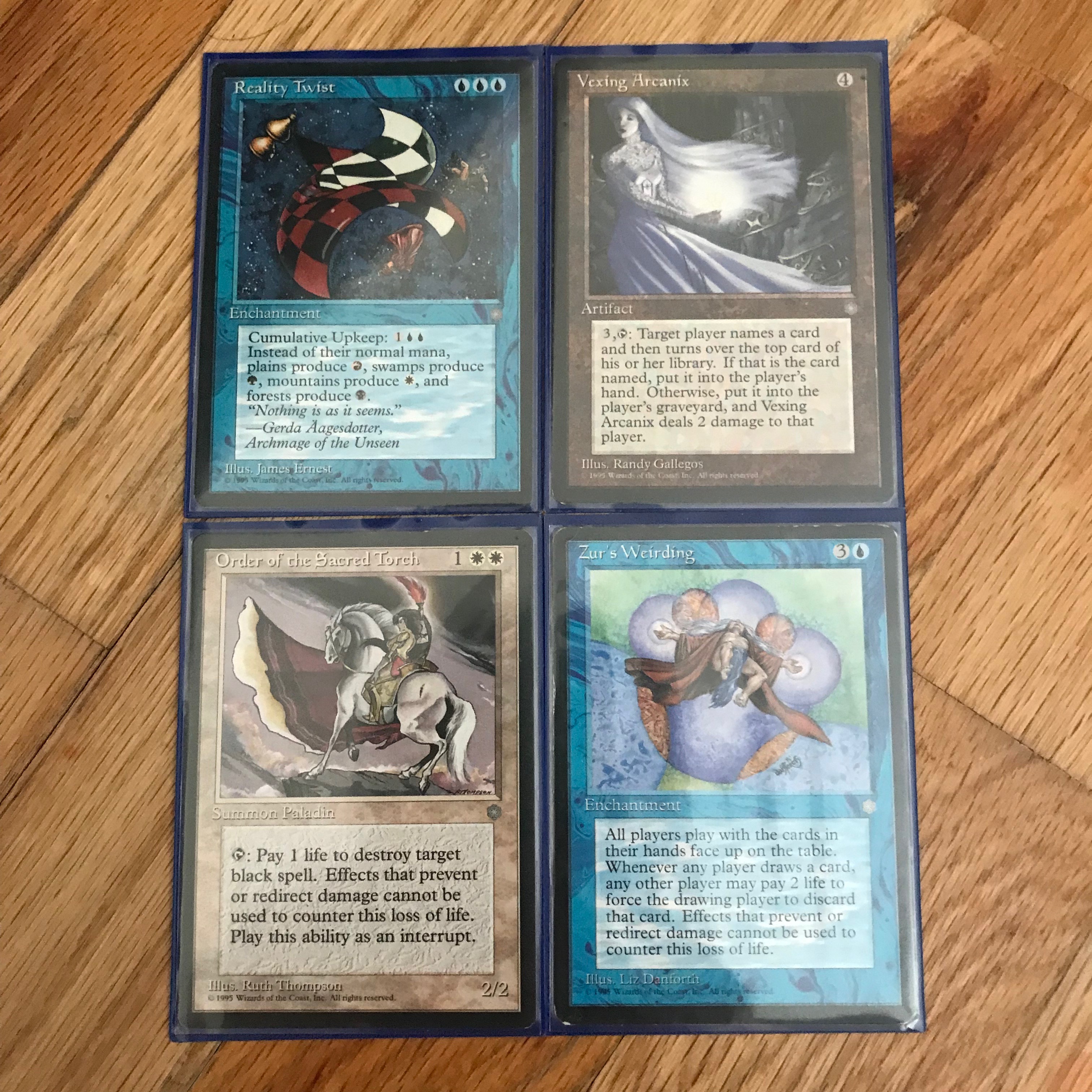 Meanwhile, Moss set up a mini-game for whomever deployed the “siqqest brue,” to wit, the most cards originally printed in 1995, excluding reprints (Shatter, Swords, Counterspell), functional reprints (Hydro/Pyroblast) or Snow-Covered Lands. Moss and Piquard tied at 15 such cards each and decided that Piqaurd would win on a tiebreaker of two Homelands cards (Primal Order + Serrated Arrows) to one (Mystic Decree). 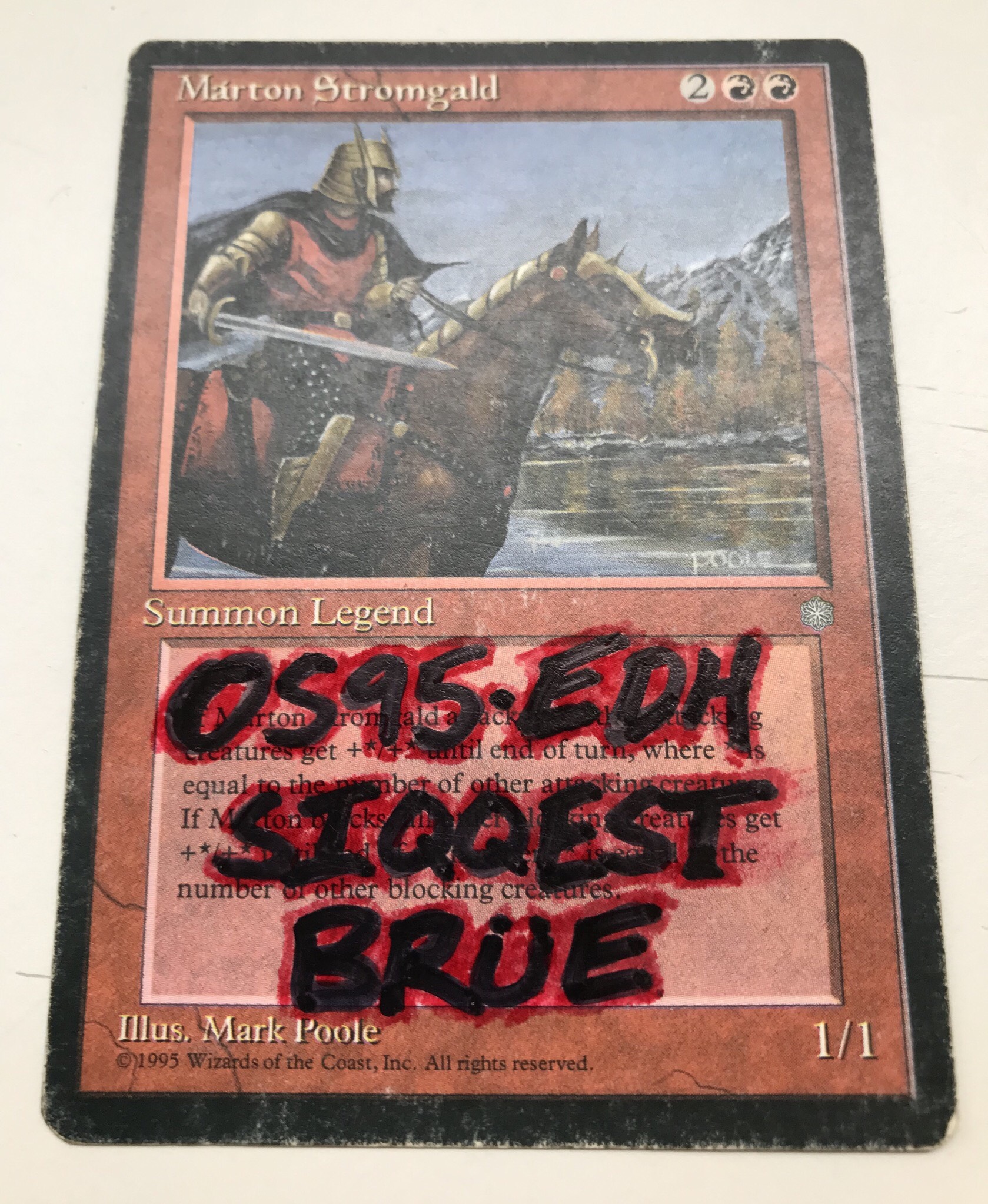 Closing observations: Time Vault plus the suite of Ice Age Talismans was an ingenious use by Schriver of 1995 tech. Moss, fearing Jester’s Cap, cut Vault from his 100 (and correctly so as he would be the sole player to be Capped). Shane played Time Vault, and later Recalled and Copied it. Vault, just as Power Monolith, has joined the ranks of most-feared cards in our OS-EDH games. Meanwhile, we tested Zuran Orb, which proved innocuous on its own but terrifying in the mid-game when combined with Balance. Moss assembled this two-card threat but exercised restraint in only taking players down to five lands when zeroing everyone out would’ve likely ended the game in miserable draw. We banned the use of Jokulhaups going into this game, and though we could’ve used it’s board-sweeping prowess at numerous points, its Armageddon-like effect would’ve been too much to overcome and the ban shall remain in-effect.

What then of our woebegone Elder Dragons? There was simply no way to effectively deploy them in this game. The Abyss, Icy Manipulators, Order of the Sacred Torch, Mazes of Ith, Tawnos’ Coffin, Time Elemental, etc. meant that even if they could survive, the Elder Dragons would be rendered helpless. As fewer and fewer creatures see the battlefield in these OS-EDH games, we’ve become more and more reliant on stalemates and big combos. It’s akin to the Western Front of WWI. We remain in development of a means to make creature-based strategies relevant once again and hope to make use of it at a future Gathering. 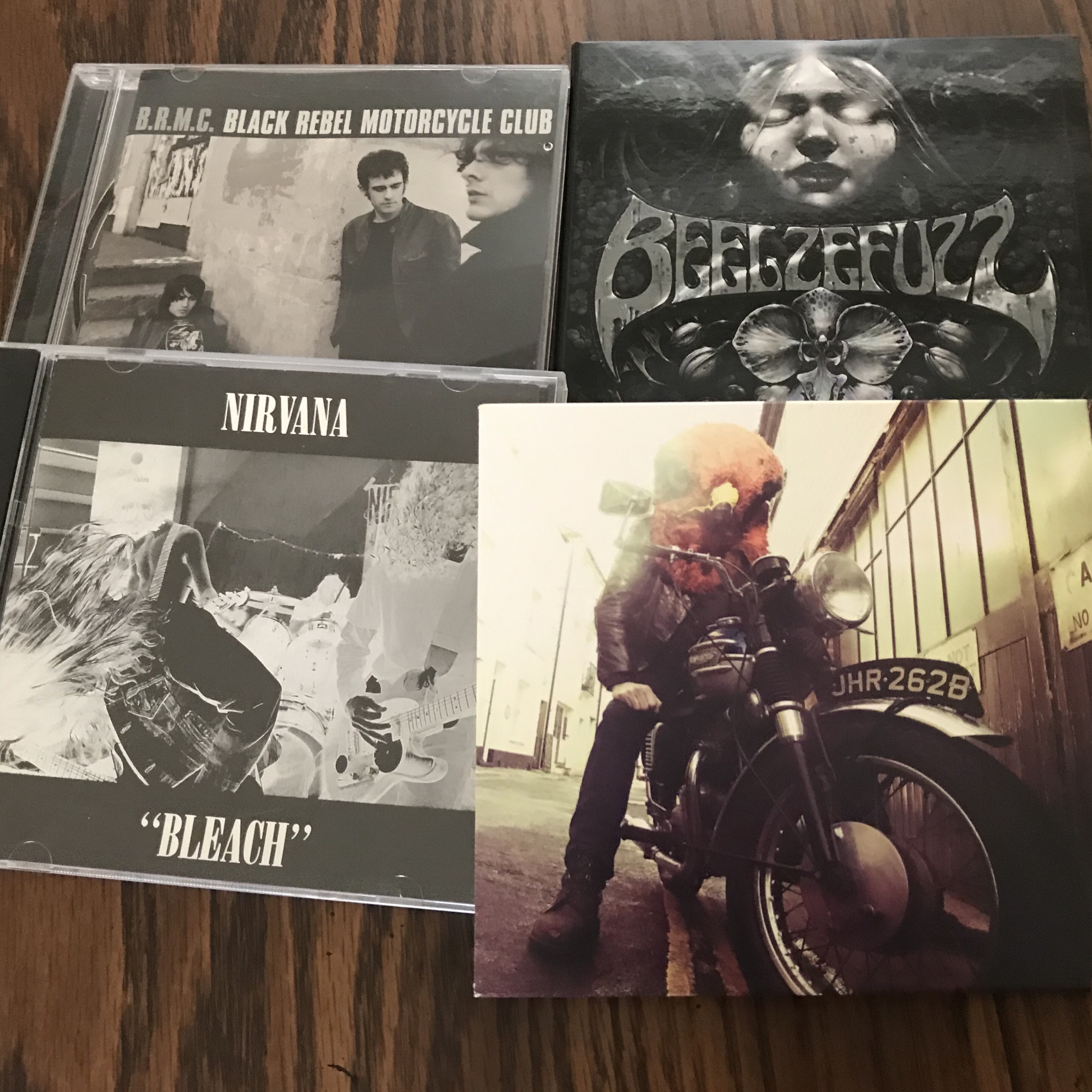 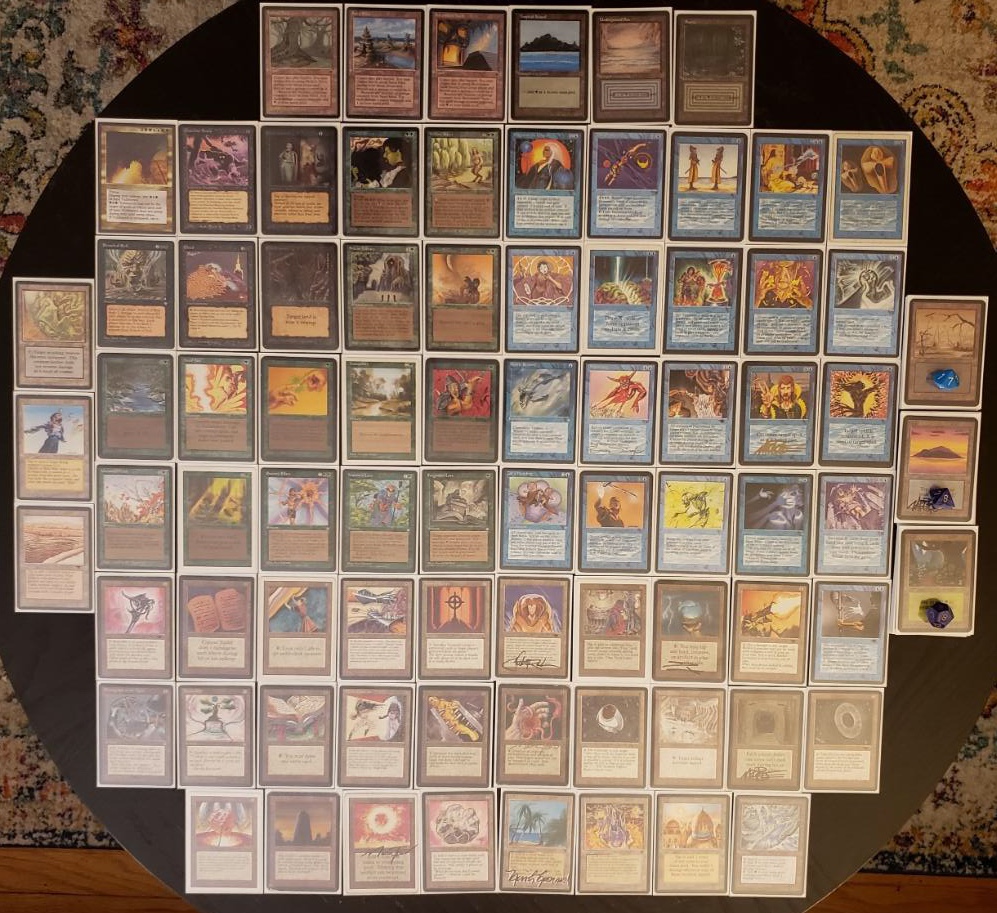 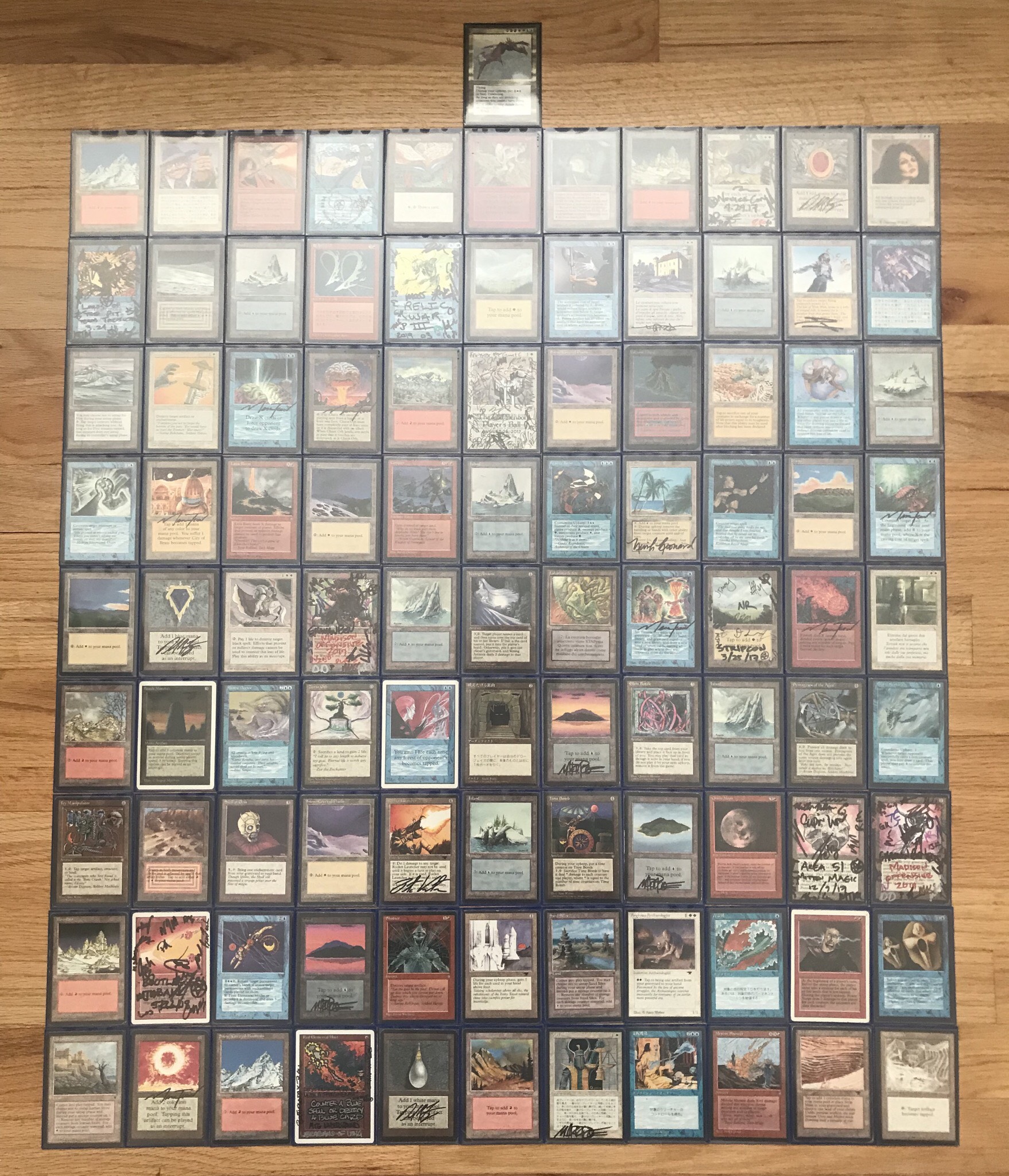 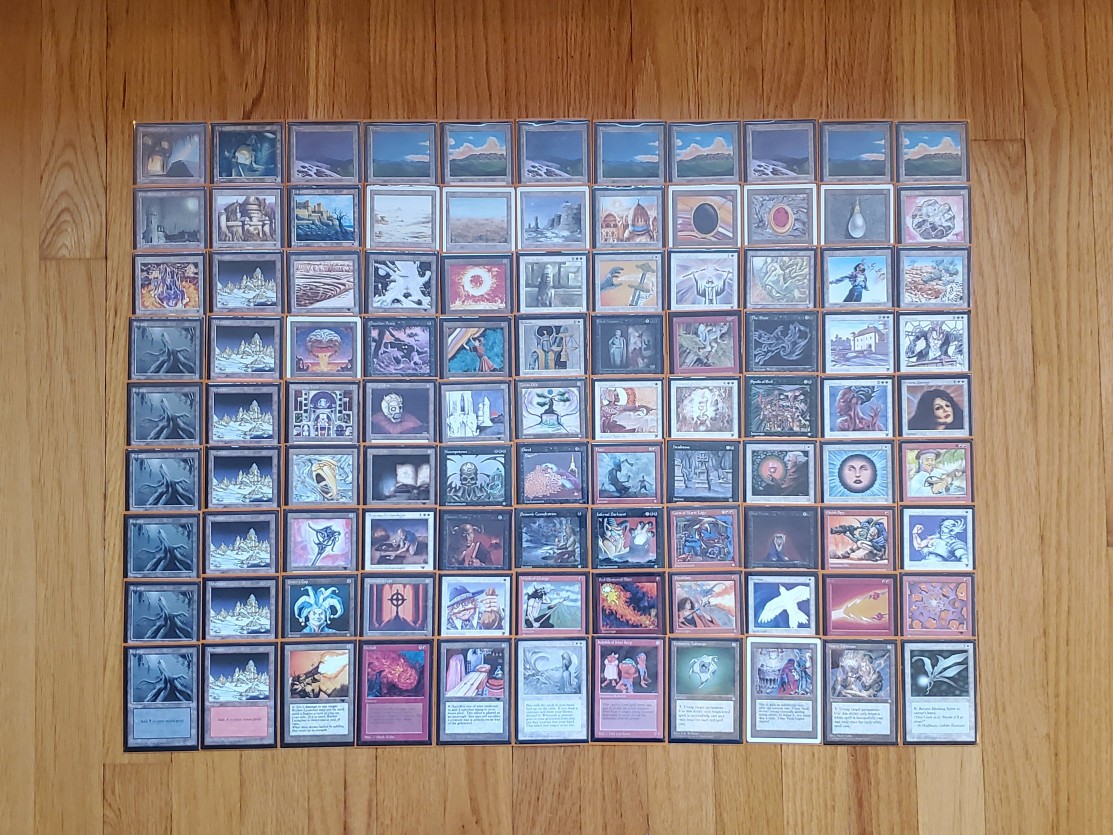 ← Pitcast - Gang Green
Pitcast – Still a Lich in My Book →