The time had finally come to battle test our new Elder Dragons, and five willing wizards gathered at Mossman’s Keep in Logan Square to match wits and stamina. The magi rolled in around 6 p.m., braving the unseasonably frigid Chicago wind chill, as Tombstone pizzas, Funyuns and craft beers provided the nourishment required to last this Gathering. Our game this eve would be five men strong, one to test each of the wedge commanders: Sahrotaar the Traitor (RUG), Vulthuryol the Hidden (BUG), Odahviing the Soaring (Jeskai), Mirmulnir the Aged (Junk) and Durnehviir the Dracolich (Mardu). Commander assignments were doled out a week prior and the magi relished the opportunity to brew outside the bun. We settled in with snacks and conversation, then battle commenced a little past 6:30 p.m. with Lord Etters having the headsman’s seat and taking the first turn… 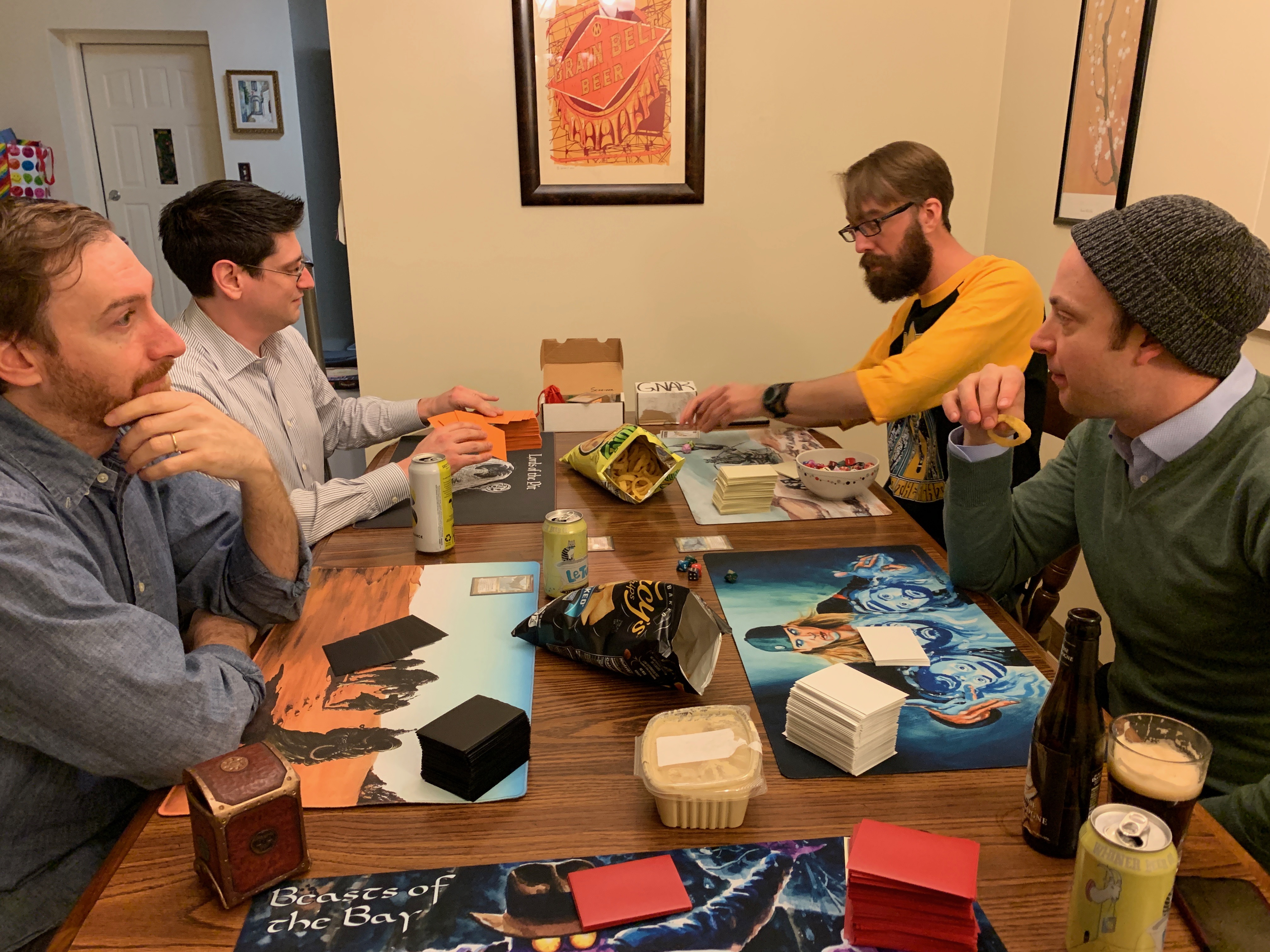 …two hours passed by. There were thrusts and parries but no major plays. Etters foiled an attempt by Lord Semmens to bring Power Monolith online, countering a Power Artifact. A timely Dust to Dust by Mossman saved the party from a Nevinyrral’s Disk, as well as Lord Schriver’s Beast-protected Chaos Orb. Schriver, in turn, nuked Semmens’ graveyard with a Tormod’s Crypt as Semmens’ Feldon’s Cane was on the stack. Numerous creatures did bits in a pair of Tawnos’ Coffins. Etters’ Witch Hunter and Piquard’s Preacher harassed various creatures. Moss created a clutch of Hive drones only to see them torn asunder by Semmens’ Ifh-Biff Efreet. 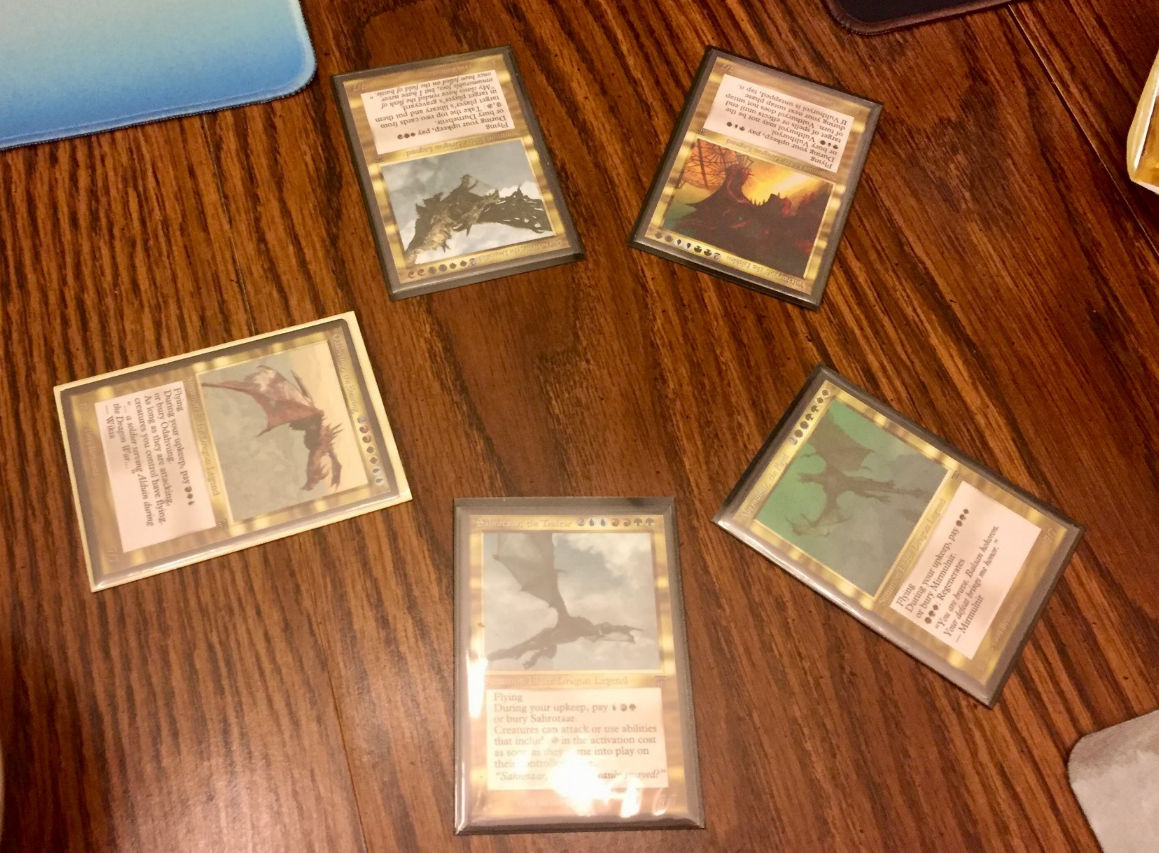 The Elder Dragons appeared to be late to the party. Other than Lord Piquard summoning Durnehviir and making use of his innate Millstone ability, the skies were not made clear for dragonkind, at least in the early goings. 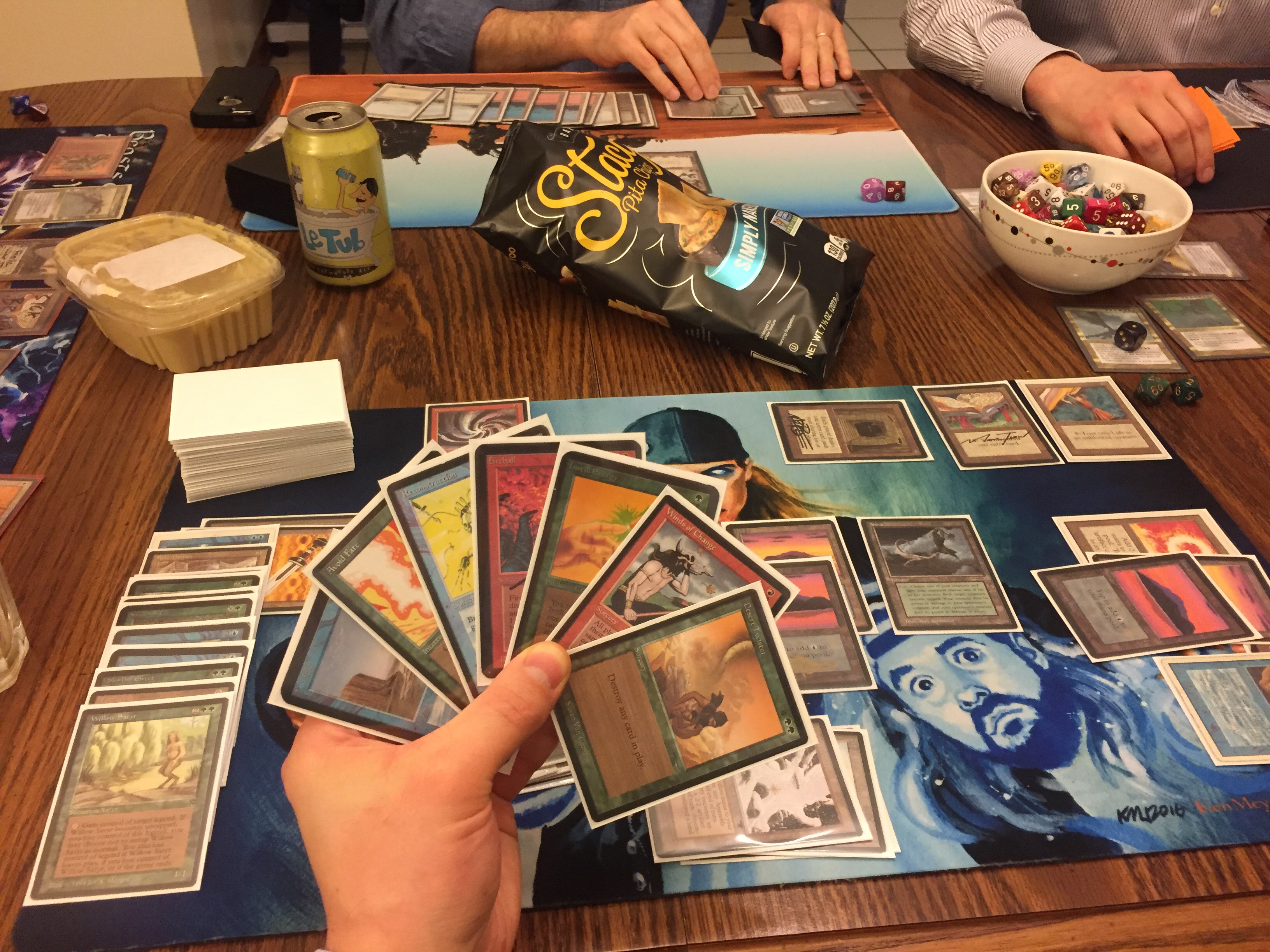 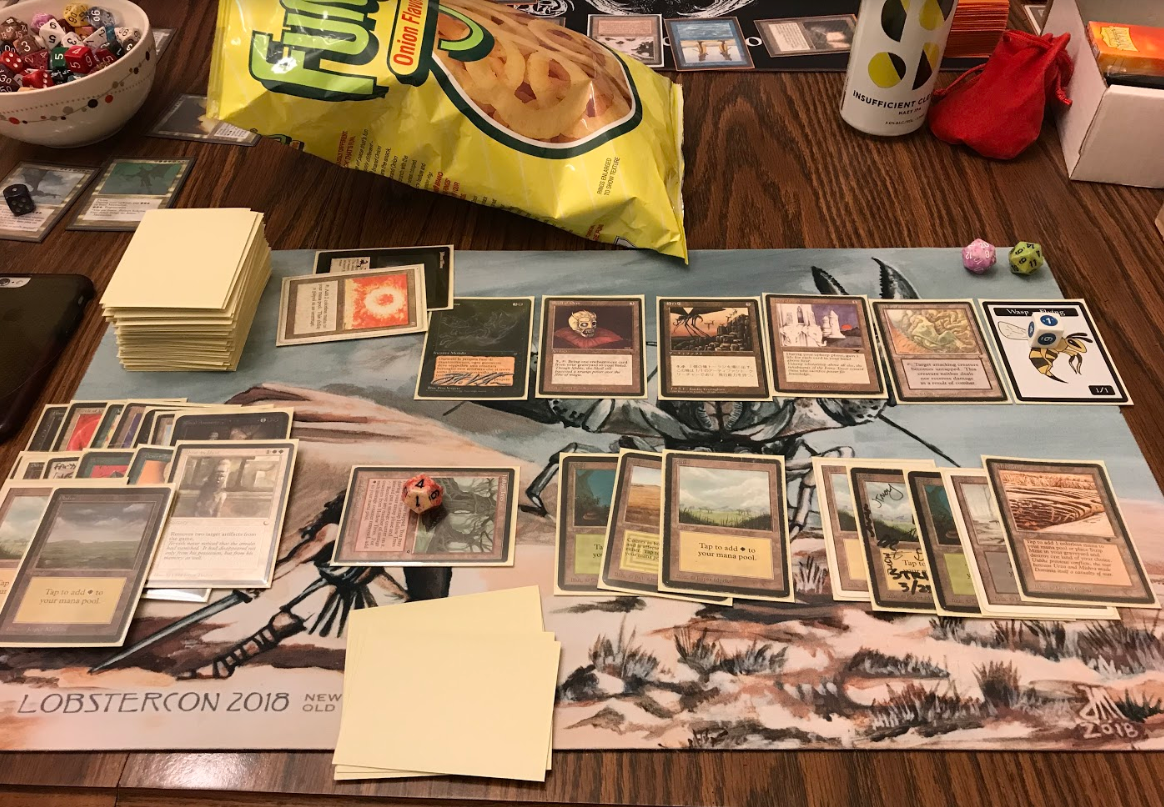 The hours whiled by and our life totals diminished. Elder Dragons began to emerge from their lairs to patrol the skies. Mossman was thankful for his Island of Wak Wak + Maze of Ith. Suddenly, in a stunning turnabout, Etters was felled at 8:28 p.m. by a pair of Elder Dragons under Lord Semmens’ command! Semmens, on Sahrotaar (who has innate Concordant Crossroads), used a Control Magic to steal Etters’ Odahviing (who gives all fellow attackers Flying). Then, the hasted pair swung in for the deathstoke! Etters had tried to liven the party earlier with a Mana Flare and he was thanked by being the first wizard sent to the showers. 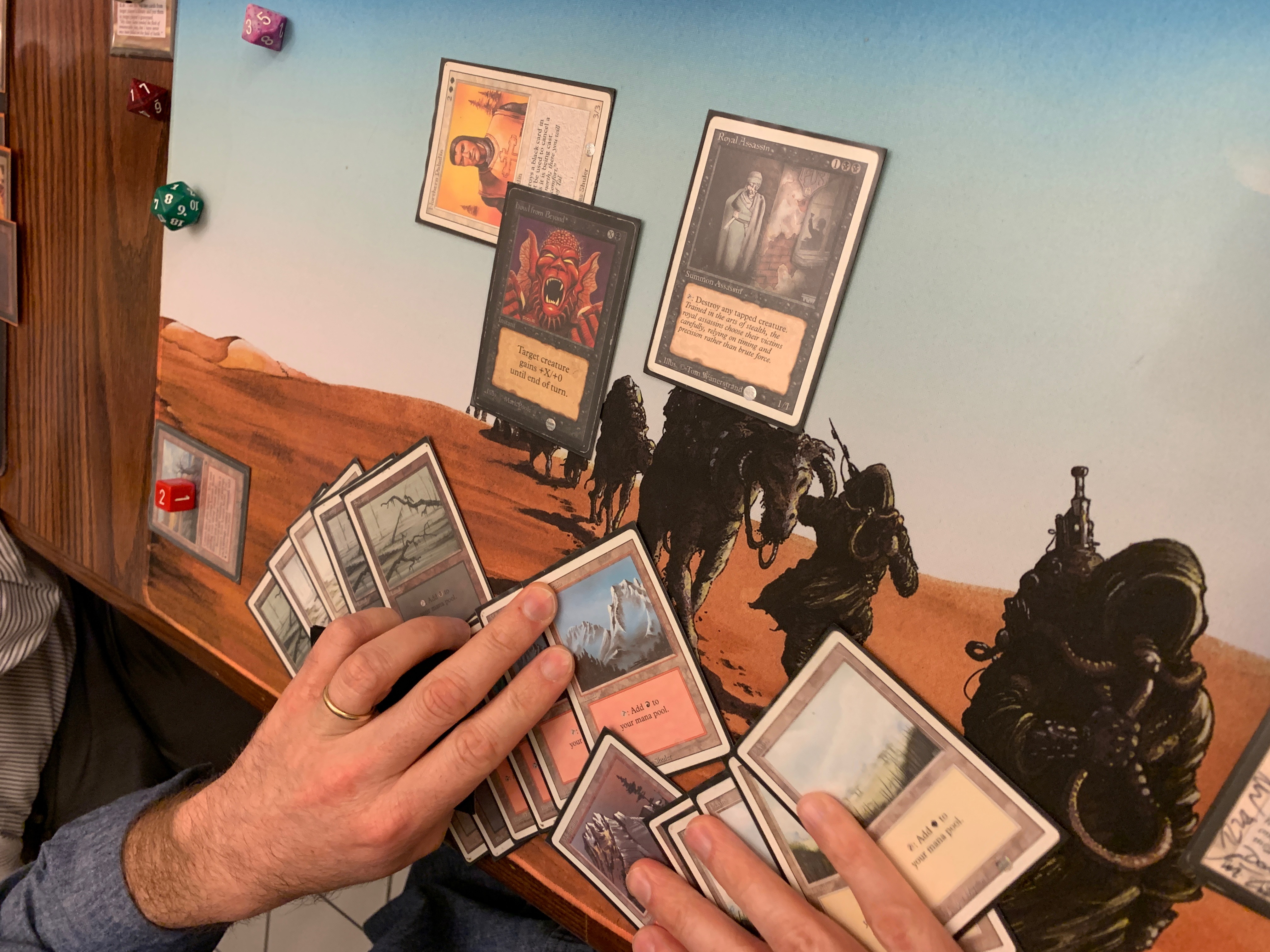 In time, Lord Semmens fell prey to Piquards’ corrupted Northern Paladin, who channeled the dark side using Howl From Beyond and dealt a crippling 21-point blow. Piquardo polished off Semmens the next turn (8:50 p.m.) via Drain Life, but not before a furious counter barrage from Schriver! 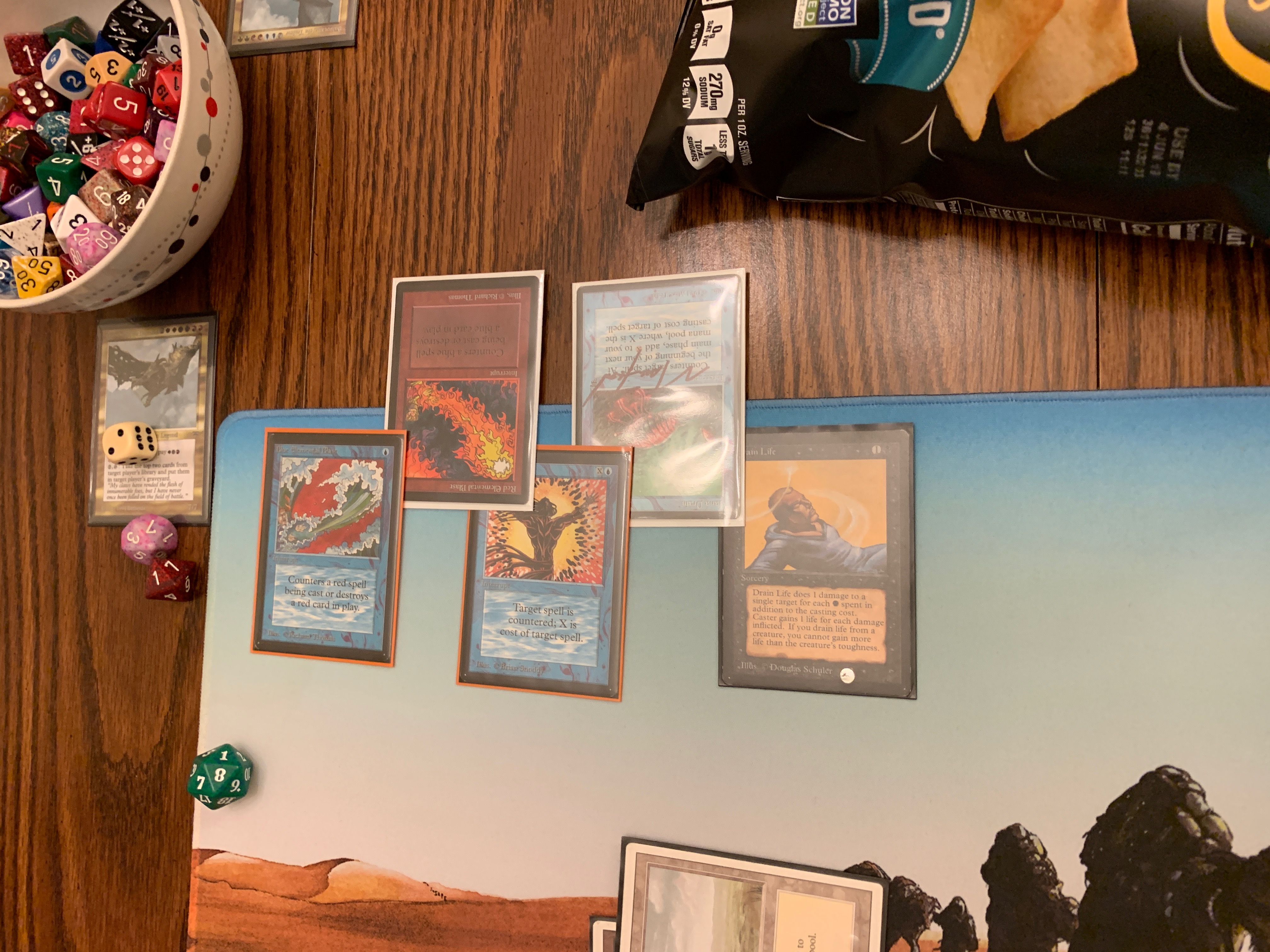 And then there were three. Piquard was wounded, but alive. Meanwhile, Schriver and Moss had played the long game to survive. Moss’ particularly pitiful boardstate had been obfuscated for most of the evening by a sack of Funyuns, but he attracted some unwanted attention when his trick six-sided die (two threes… care to do odds or evens?) was discovered. A pair of Howling Mines plus Mossman’s Underworld Dreams, and Piquardo was dispatched. The doctor called the time of death at 9:28 p.m. 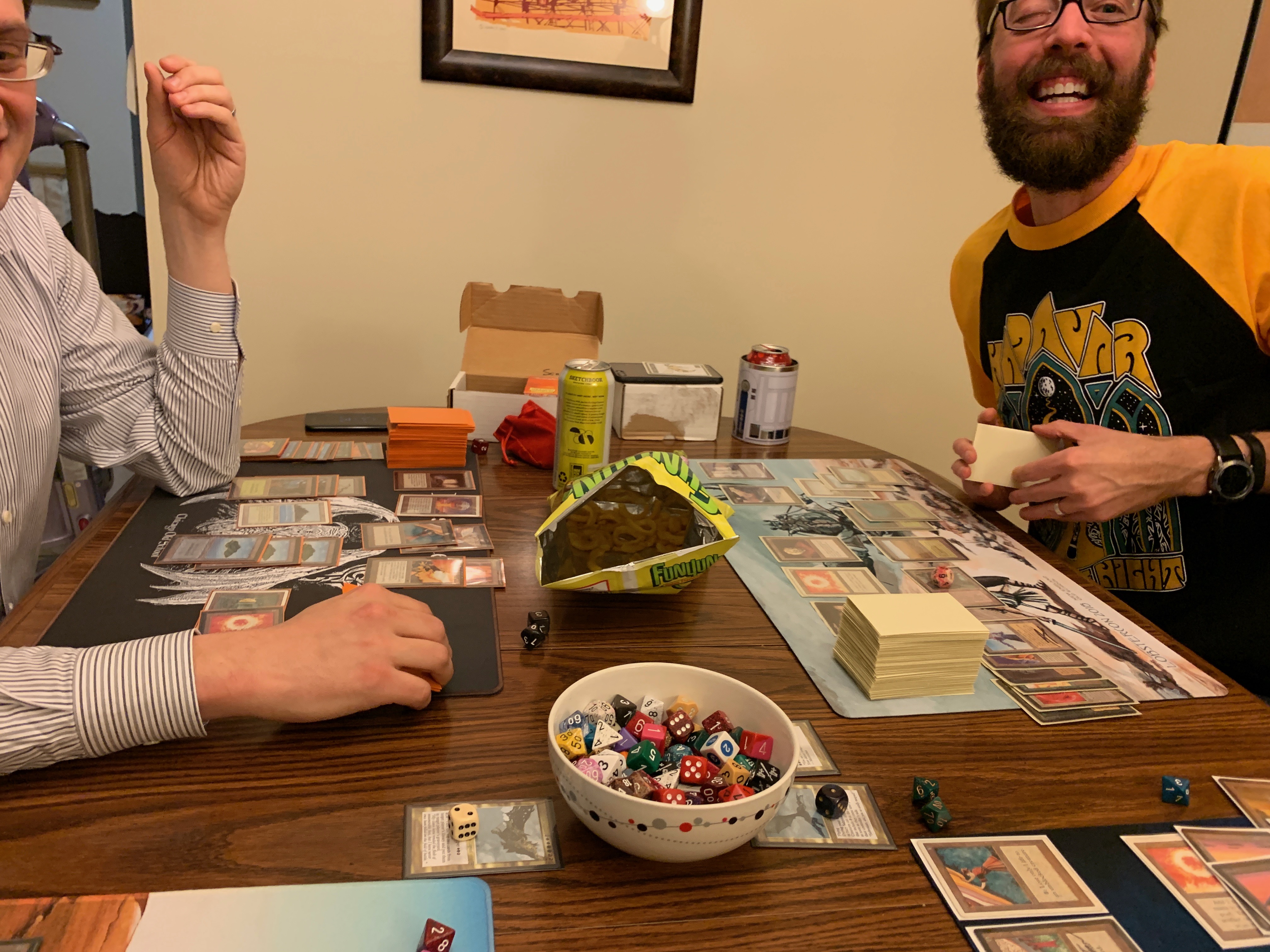 Schriver finally summoned Vulthuryol but promptly sacrificed him to Diamond Valley, a maneuver that would attract Moss’ Strip Mine because of its duplicative effect. Schriver used Gauntlets of Chaos to “donate” Lord of the Pit to Moss, a typically joyous occasion but here a precarious one. With the Pitlord’s damage on the stack in the ensuing upkeep, Moss deployed Reverse Damage for a 14-point swing! Underworld Dreams + Schriver’s own Greed placed him in danger, however, a previous tactical error by Mossman bore fruit. Previously, after three or so hours of trench warfare, Mossman had Disenchanted his own L’Abissio to finally summon Mirmulnir the Aged, a mighty regenerating Elder Dragon. Taking down the protection of The Abyss had the unintended consequence of enabling Schriver to summon both Time Elemental and Vesuvan Doppelganger! That tandem kept Mirmulnir and Underworld Dreams at-bay. Mossman answered the bell with Tsunami, a powerful late-game haymaker. Schriver, however, had cast Transmute Artifact to convert a spare Moxen into Time Vault… now with the help of Demonic Tutor he assembled an Animate Artifact > Instill Energy > Time Vault combo for infinite turns! Mossman capitulated at 9:44 p.m. and Schriver collected the hard-fought OS-EDH victory, putting him atop the Lords’ Leaderboard with two such tallies. Not for the faint-of-heart, this marathon Gathering clocked in at a burly 3:14. 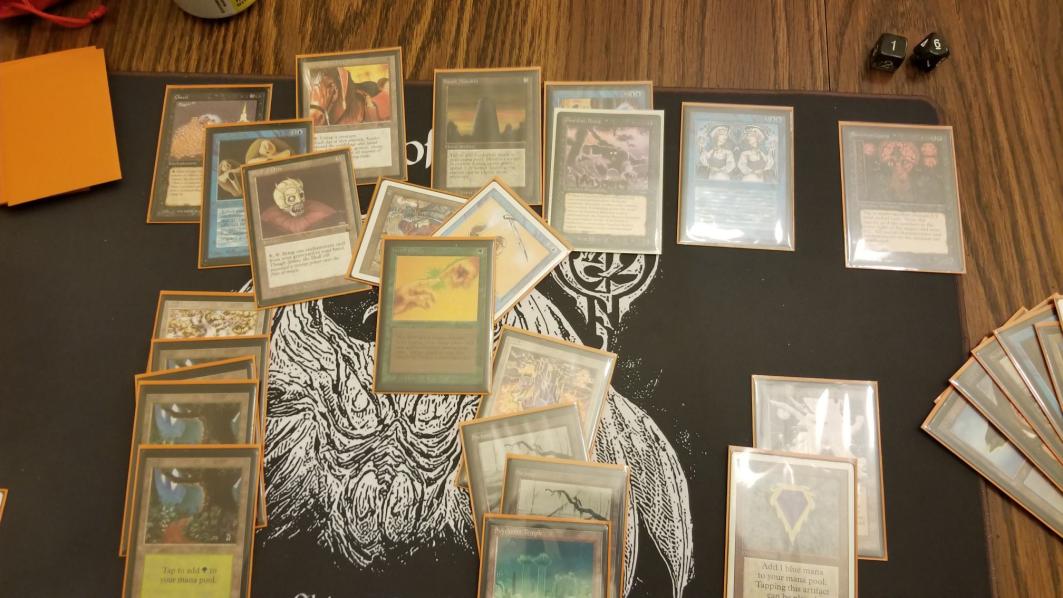 Smoke cleared, garbage went out, and dishes were put away… so what was our lesson? The Elder Dragons in this context were reasonably effective as-designed. No singular Elder Dragon was overpowered (or even close to as powerful as Nicol Bolas). Unfortunately, combat matters little in OS-EDH as efficient creature removal remains legion. The true value in these new Elder Dragons lies within the brewing opportunities of the wedges. As we continue to tinker with this format, we will look for alternatives to push combat relevancy, but we will also welcome our five new Elder Dragons as permanent commander options.

On our OS-EDH page you can find downloadable versions of our wedge Elder Dragon Legends to try with your own playgroup. 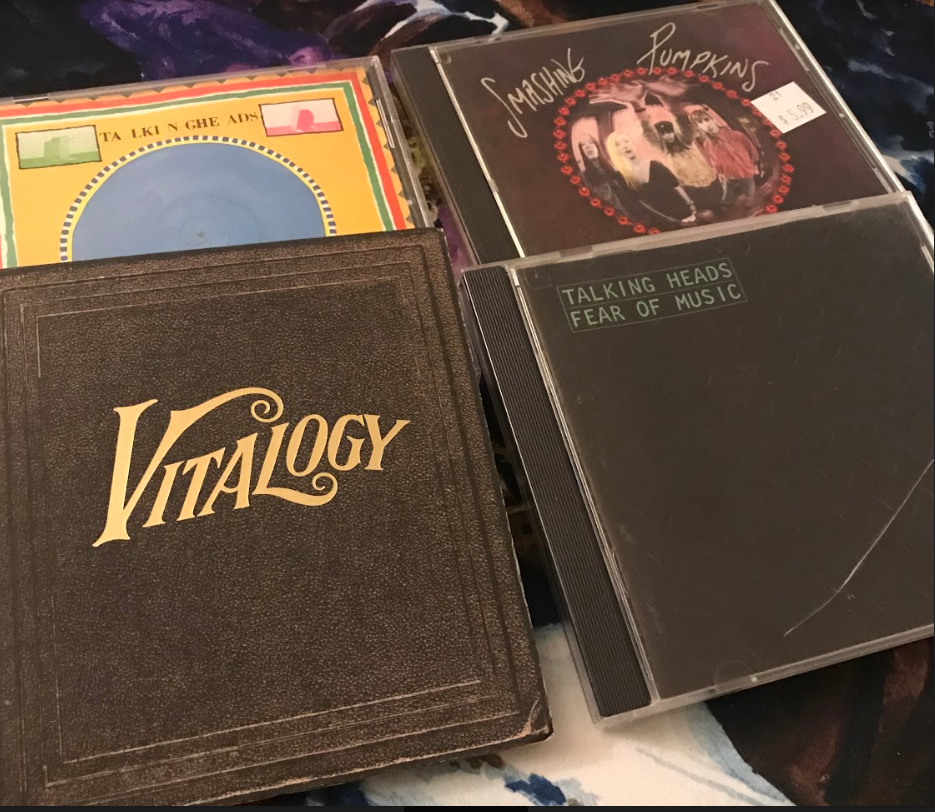 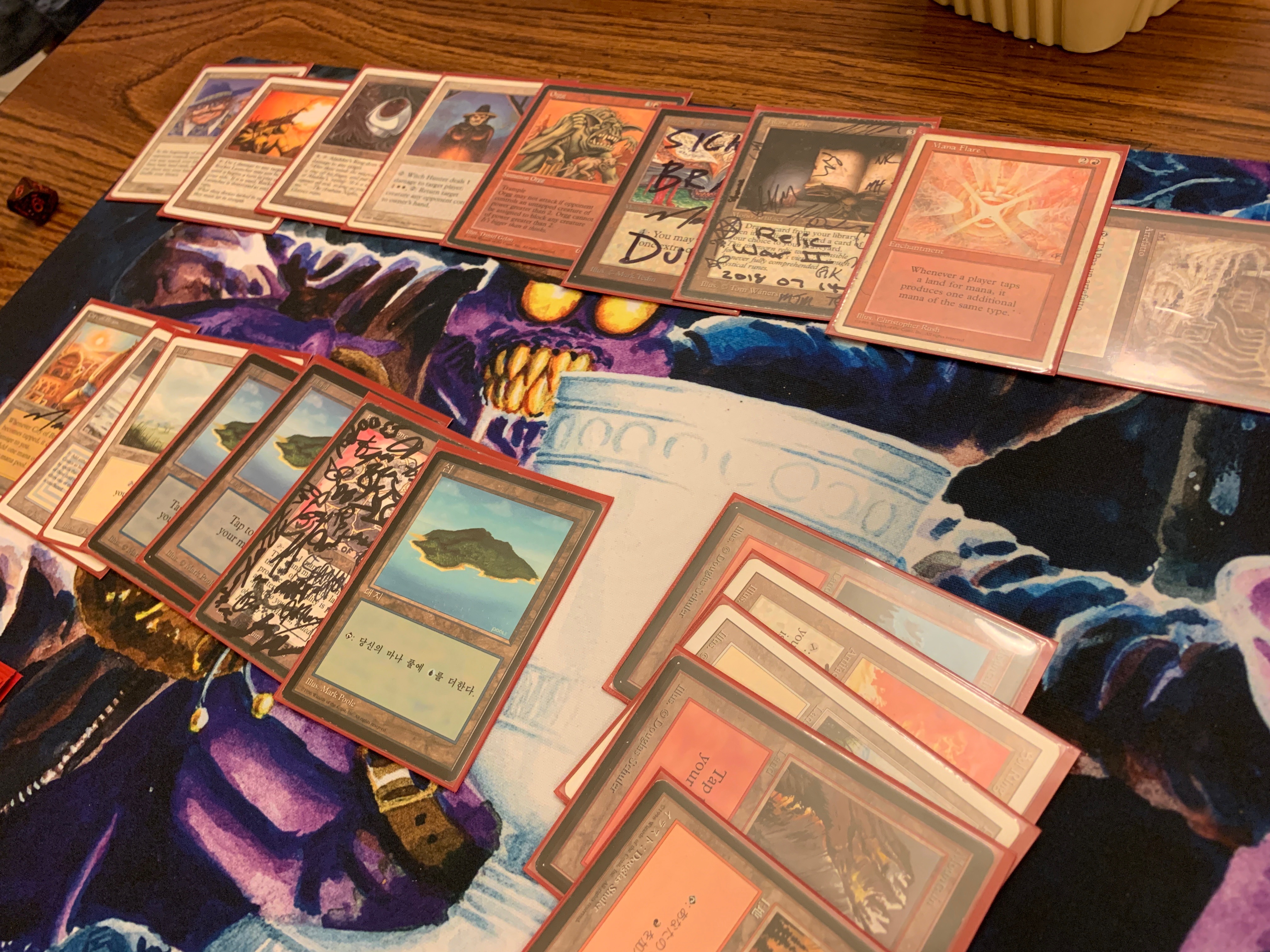 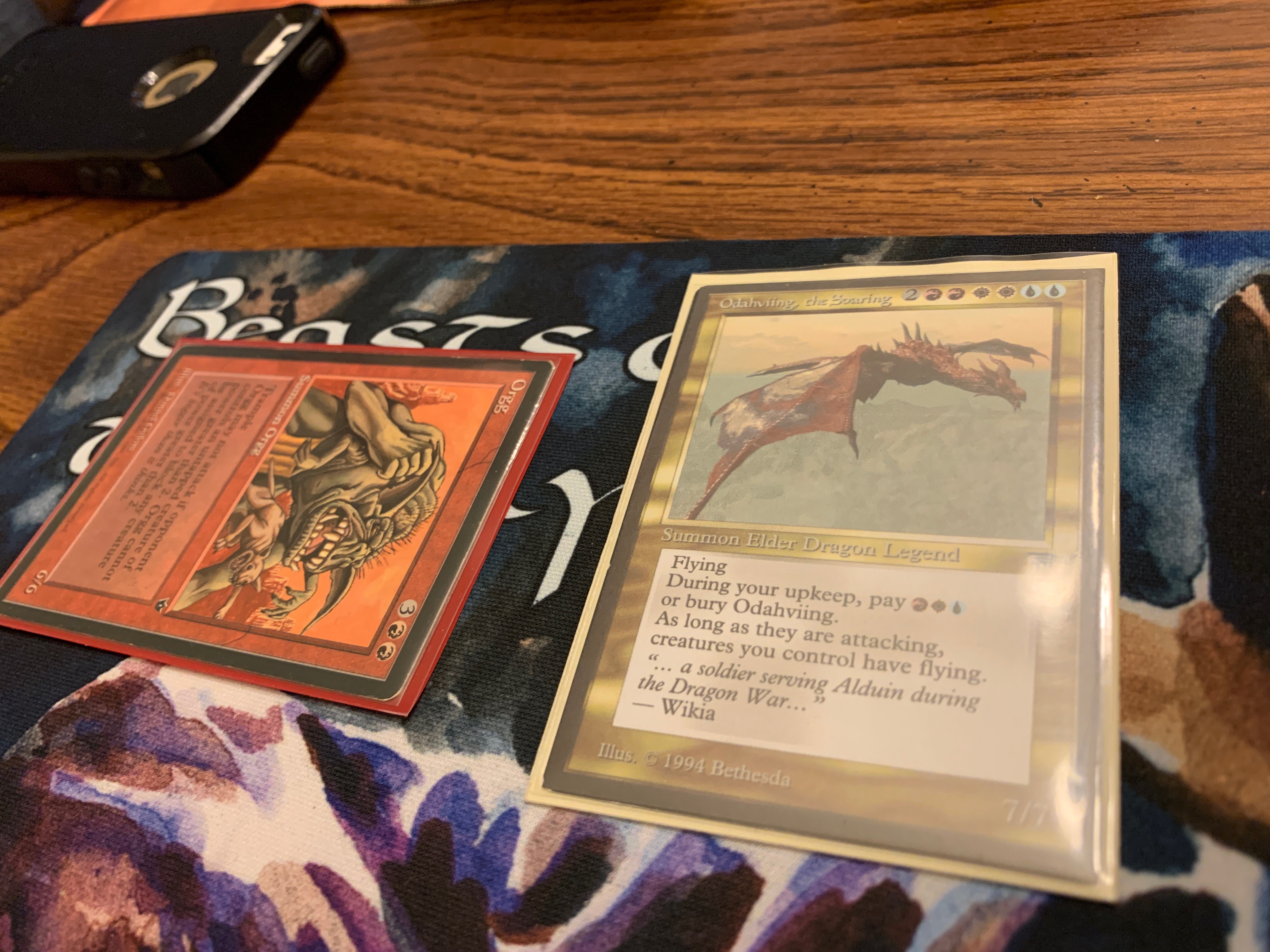 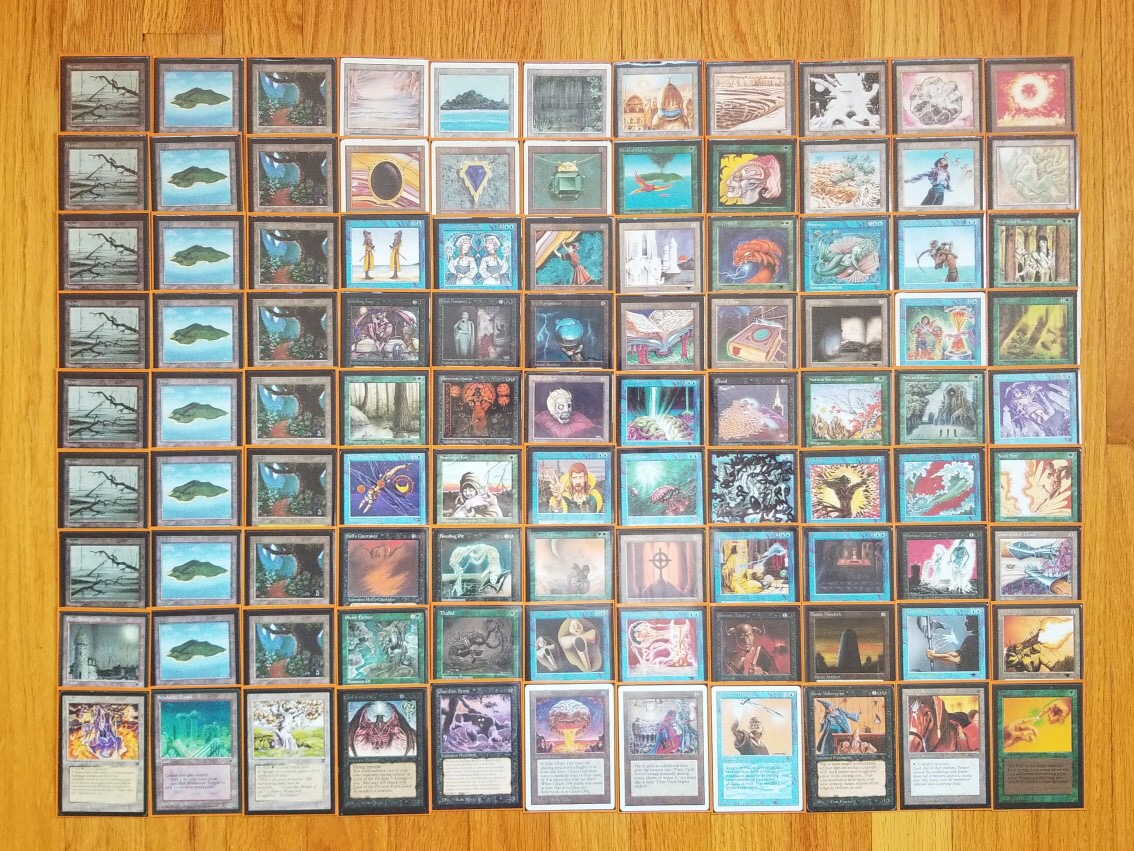 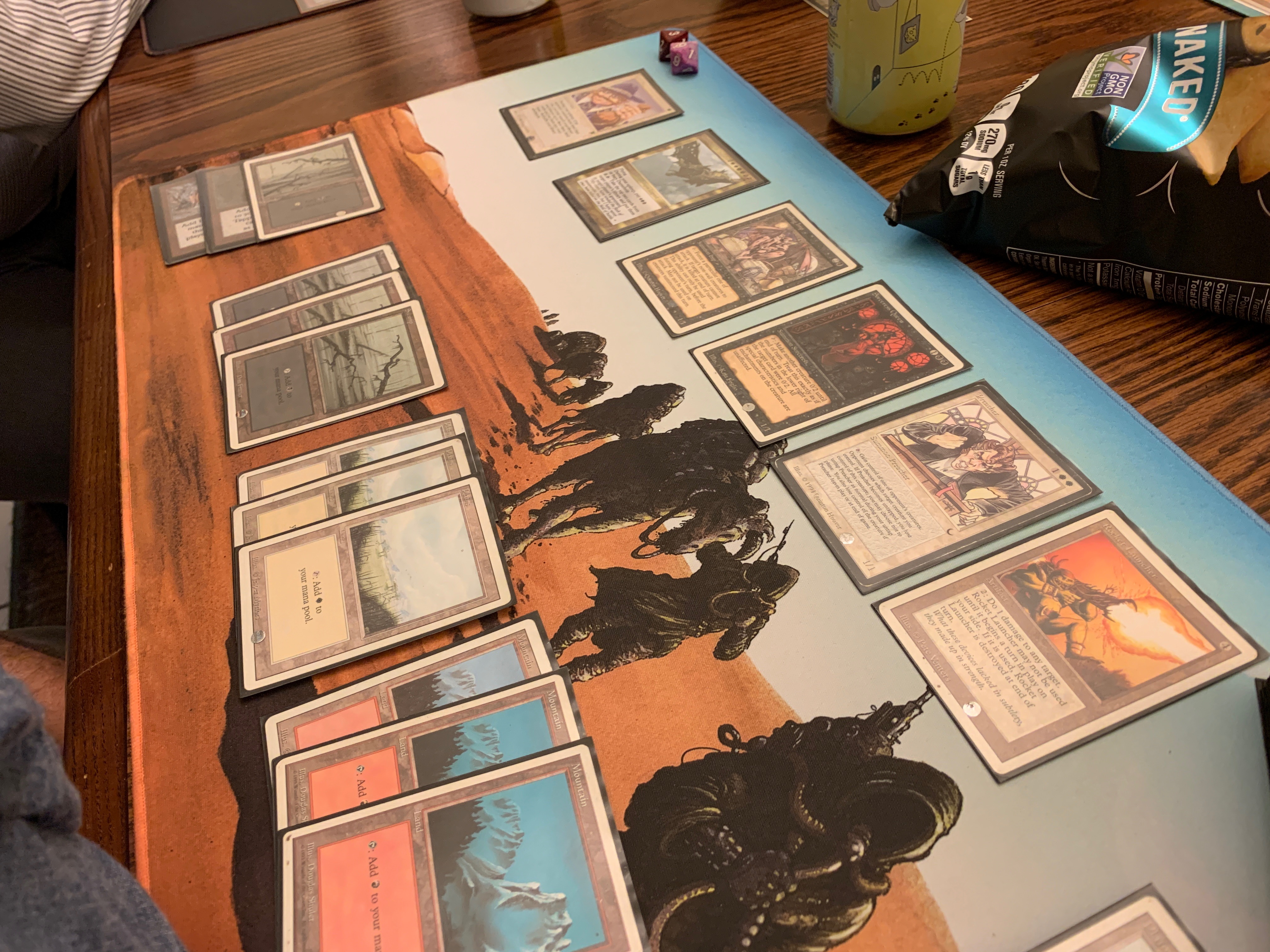 ← Pitcast – Still a Lich in My Book
Pitcast - ASMR Warheads →