Albert Einstein stared up at the Gathered magi, bottling whatever diabolical Enchantments they had in-mind for this game of OS-EDH. Lord Marty Silenus passed the turn… 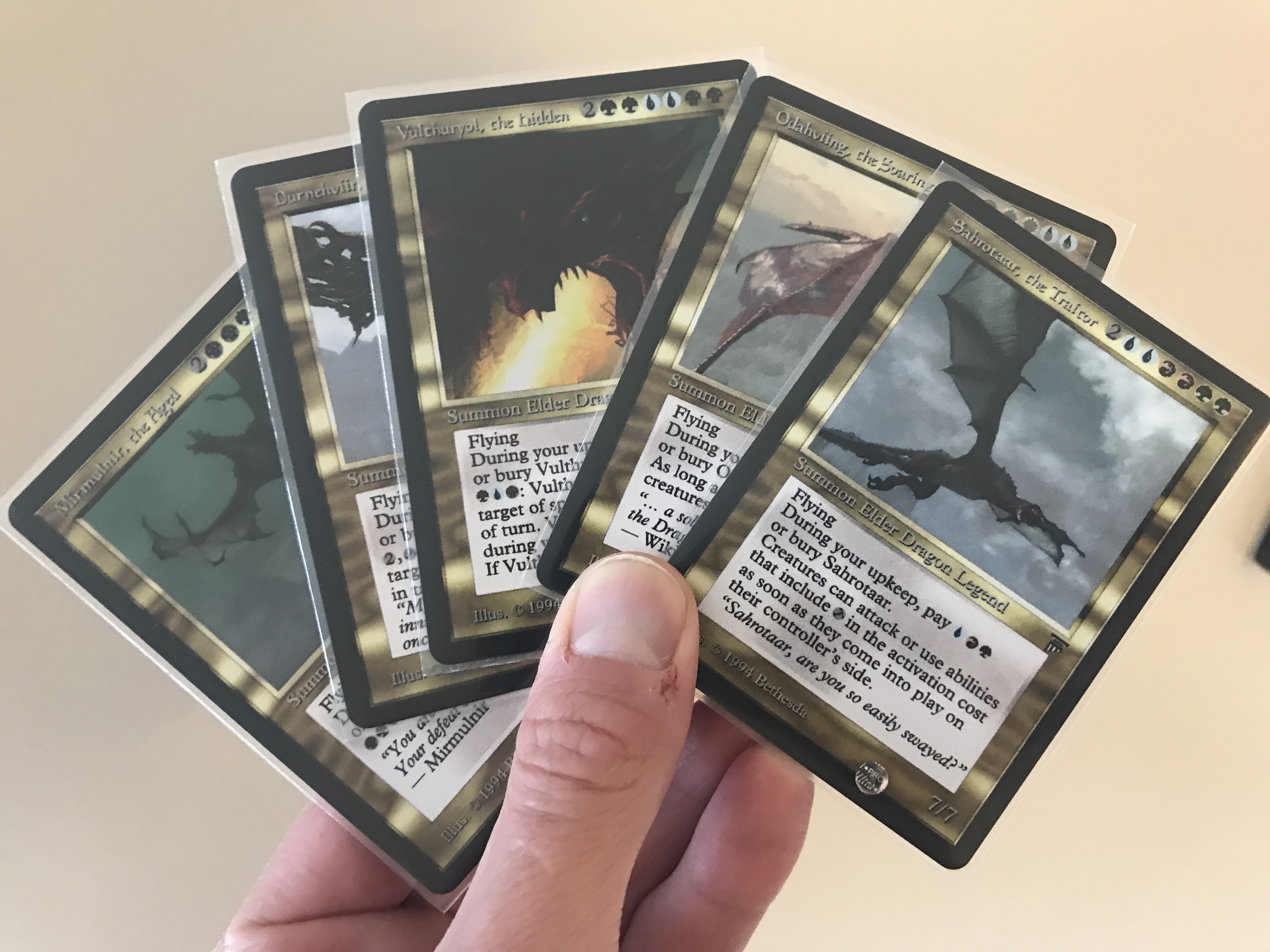 …and such was the tenor of gaming this evening as The Council of Elders met, five-strong, to unfurl the wings of Legendary Dragons. Janky creatures, jankier enchantments and dazzling combos rained down amidst a feast of frozen Tombstones and a soundtrack of Ozzy & Dio. The Lords unshackled the Banned List for one night and only Armageddon and Shahrazad were excised for time-consideration. Could we be trusted with such unbridled Power? 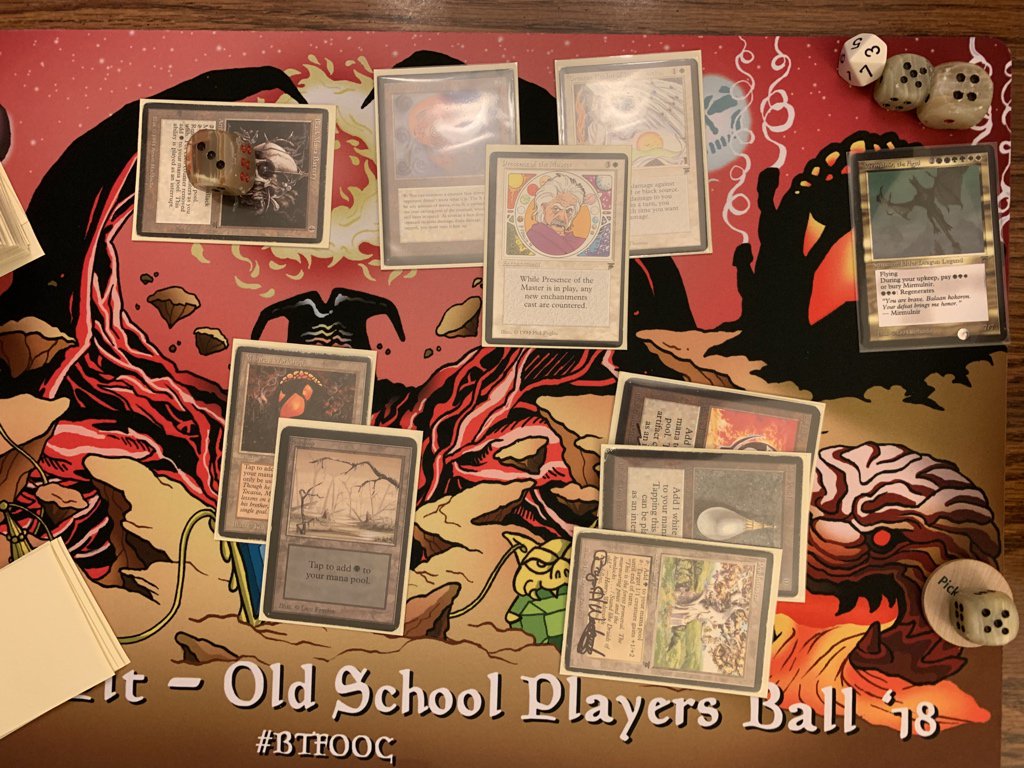 We began innocently, a few baller Artifacts and Enchantments but nothing too threatening. Moss put a Relic Bind on Carter’s Icy Manipulator, then used his own Relic Barrier to tap said Icy and distribute life & damage on a willy-nilly basis. Tyler unleashed a Fissure onto Marty’s Karakas (now unbanned) then he Forked it onto Shane’s Karakas! Could the great wurms be unleashed? Tyler tested the skies, sending Durnehviir the Dracolich toward Moss, but he’d misread the board and the Mardu Dragon was zeroed out by Island of Wak Wak.

Eventually, the board stalled out as it’s want to do. A Nev’s Disk resolved, popped and we started afresh about 30 minutes in. The key to these OS-EDH games is to periodically till the field. Moss was sad to see his beloved Alpha Sea Serpent swept to sea forever, but the clean slate offered new opportunities for… stalling. First it was Land Equilibrium, then Stasis hit the board with enough blue mana to keep it online for a considerable length. Turns passed, untap steps were skipped, cards began to be discarded. 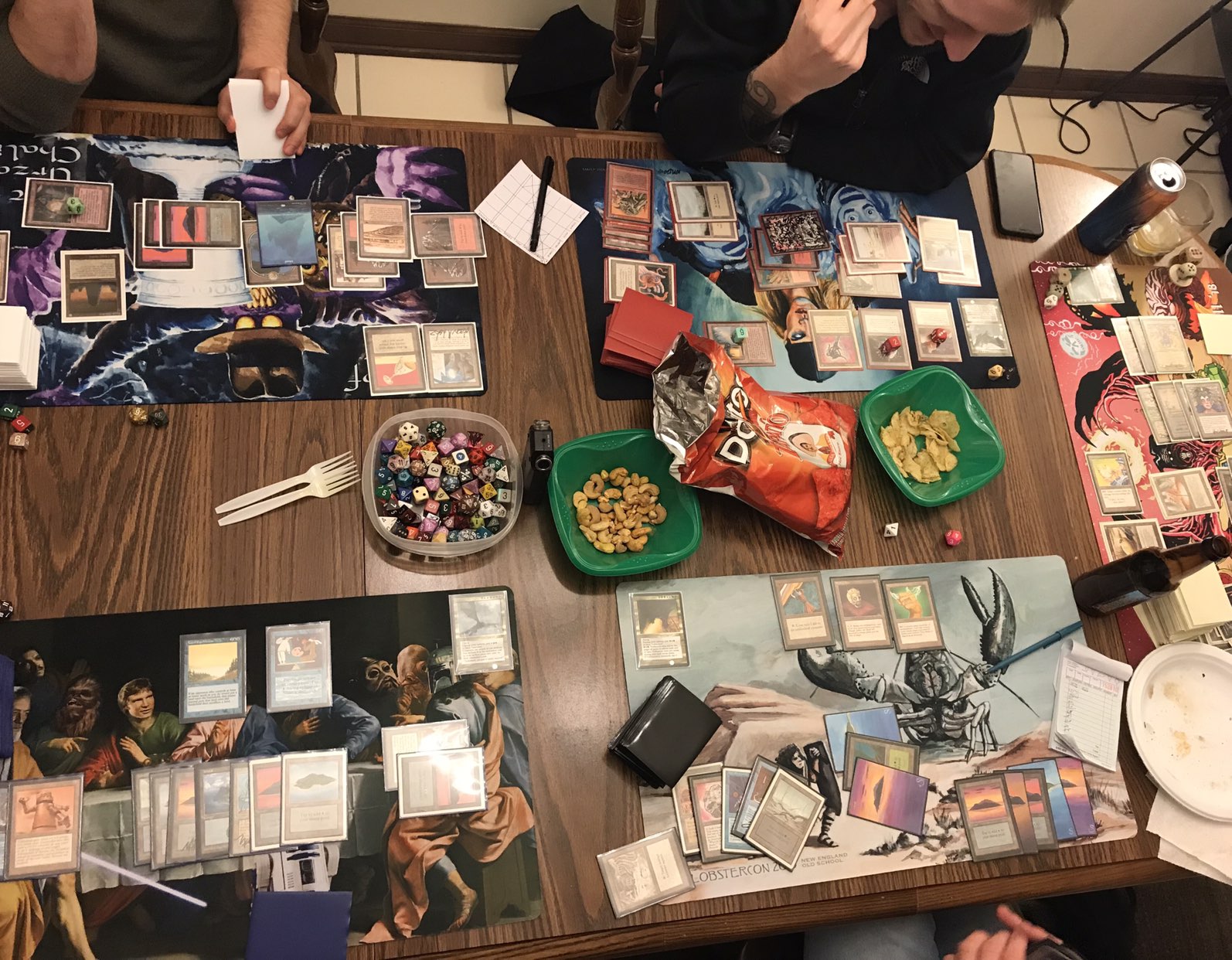 Unbeknownst to the group, Carter used the Stasis delay to sculpt a near-perfect nut-hi combo hand. After ten or so minutes of dicking around with Stasis, he unleashed fire & fury. Power Artifact onto Basalt Monolith? Resolved. Stream of Life? Resolved. Uh-oh, Book of Rass? Resolved. Carter then threw the Book at us: he’d gone infinite on life, could draw his entire deck, then loop the deck via Timetwisters. The madcap generated infinite Hive Tokens and swarmed the field, capturing his first OS-EDH victory. This was our fastest OS-EDH game ever at just under 70 minutes! 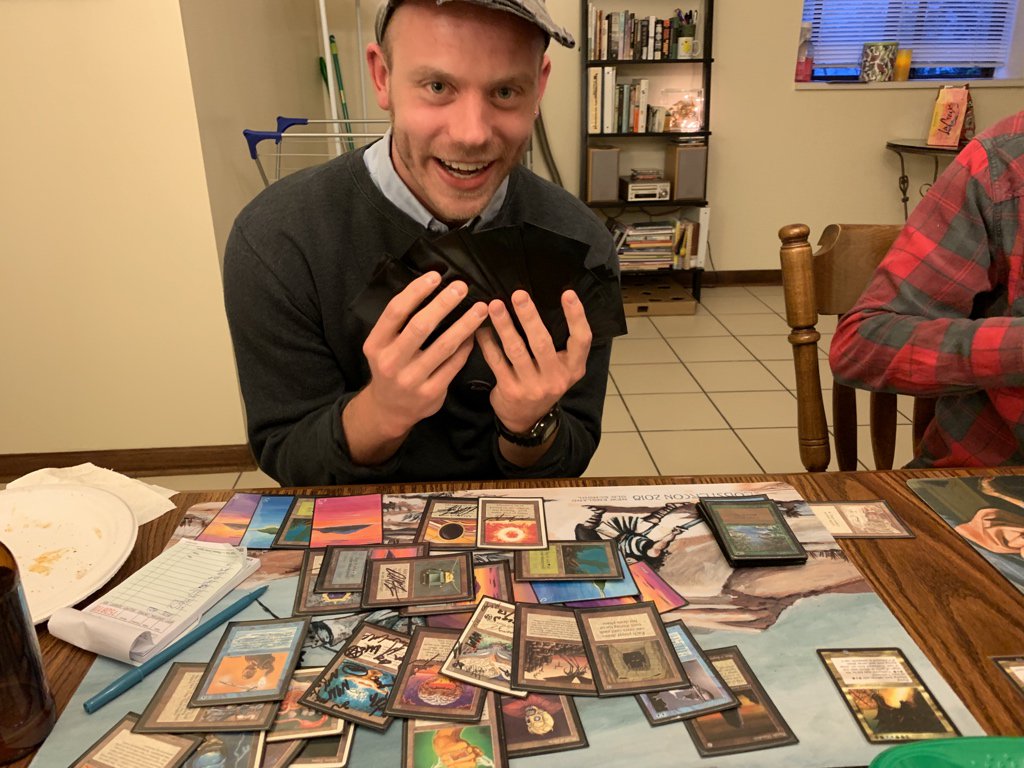 Game 2: Blowin’ in the Wind

Following the startling finish to Game 1, we decided we had time to shuffle up for a bonus feature. Tyler led off with a T1 Library, which Moss immediately slapped with Psychic Venom. Red Blast! Tyler drew freely from the Library until Moss’ next turn, when the LoA was again targeted and turned into a basic Island by way of Phantasmal Terrain.

We durdled our way toward the mid-game, Carter slowing things down with his own Stasis. Marty unleashed the Junk-colored Mirmulnir, who took a bite out of Carter for the only Commander damage scored on the evening. Shane slapped down a Land’s Edge, which unleashed a fusillade of chucked lands for damage. Moss weathered the shootout thanks to durdly lifegain cards such as Crystal Rod, Lifetap and that extra-sneaky-underplayed technology, Urza’s Chalice. Carter, meanwhile, was on the ropes. A series of haymakers, including Shane’s backhand with Aladdin’s Ring, left the G1 winner at a single life point. The coup de grace fell to Moss’ mighty Pirate Ship! We were reduced from five to four combatants. 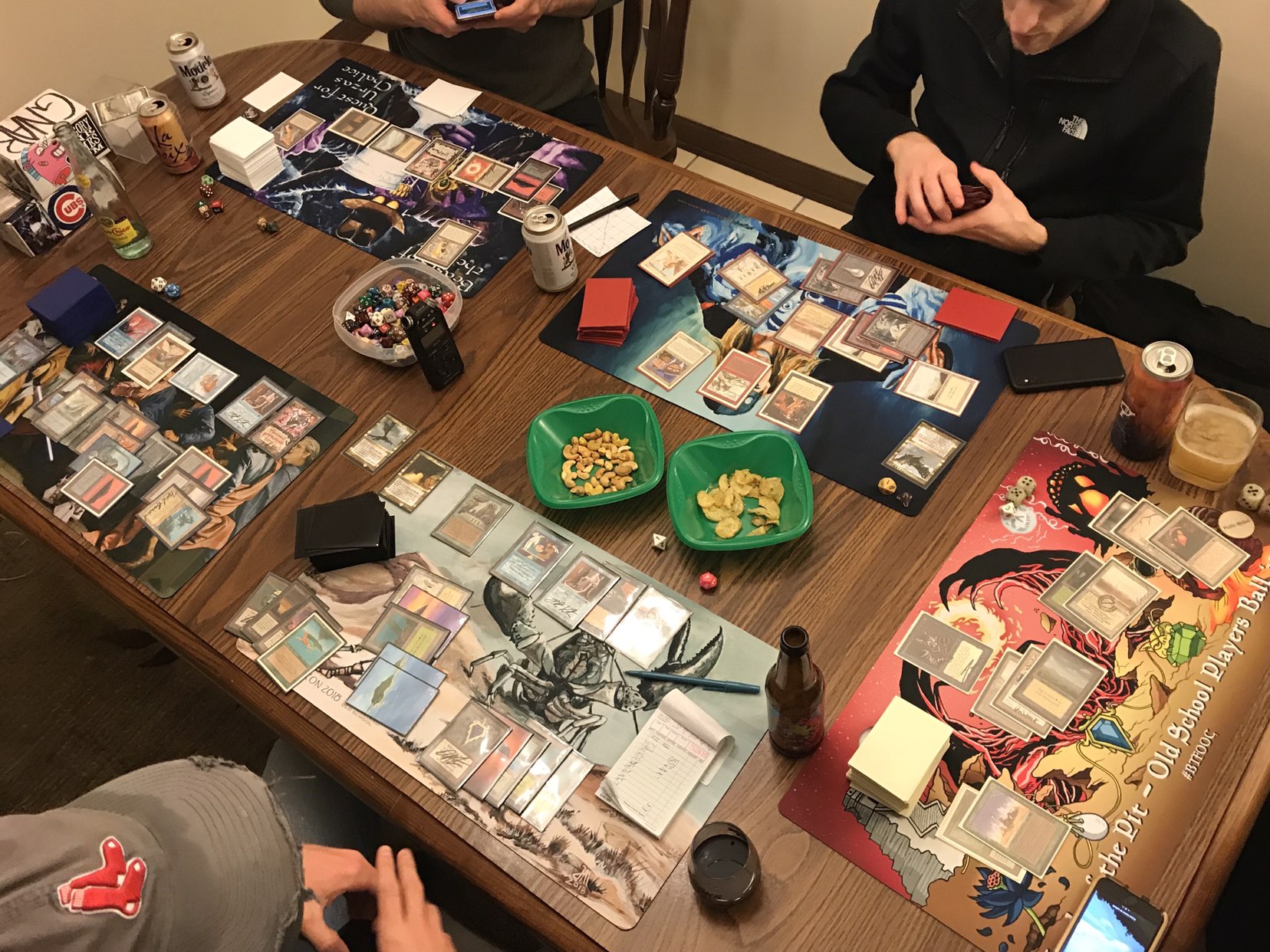 Time rolled on and Marty got a Chaos Orb / Agrivian Archaeologist loop online, wisely avoiding Moss’ fortress and the Pirate Ship’s wrath. After another Land’s Edge firefight, Tyler checked out to catch the Metra UP-NW line home. Since Tyler scooped, Moss wisely held back on the nine counters sitting on his Triskelion (via Tawnos’ Coffin).

Three wizards remained. Moss had his entire infinite turn combo in-hand (Time Vault, Animate Artifact and Jandor’s Saddlebag) but forgot Shane had a Chaos Orb in-play and the combo was scuttled. Marty dropped the dreaded Mirror Universe and Moss responded by Sonny Corleone’ing himself for nine with Triskelion… all that lifegain durdling was about to backfire. Another round passed, the Mirror was broken, and the life totals stood: 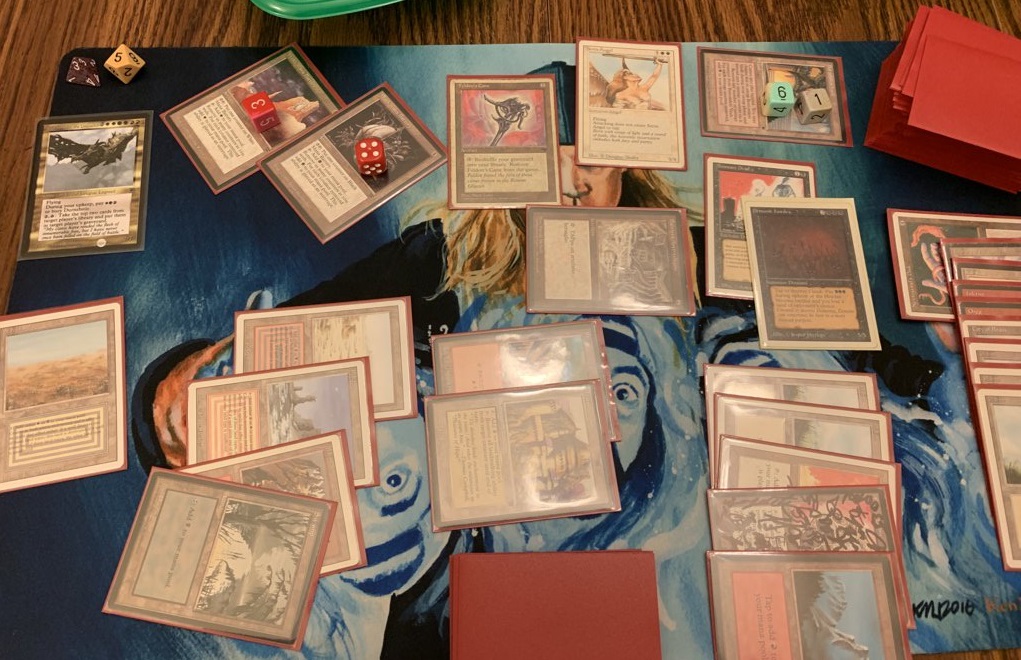 Marty wanted to Hurricane Moss out, but he’d have to tap enough Forests that Lifetap would keep the erstwhile Blue Wizard in the hunt. Marty unleashed it, for eight, then Shane chipped in with Fork! Moss was vanquished, but not before he used Saddlebags to untap Pirate Ship and ping Shane…

…Shane pimp-smacked Marty on his end-step, again with Ring. Then, he untapped and did it again. G2 was finished and Shane collected his second OS-EDH victory. 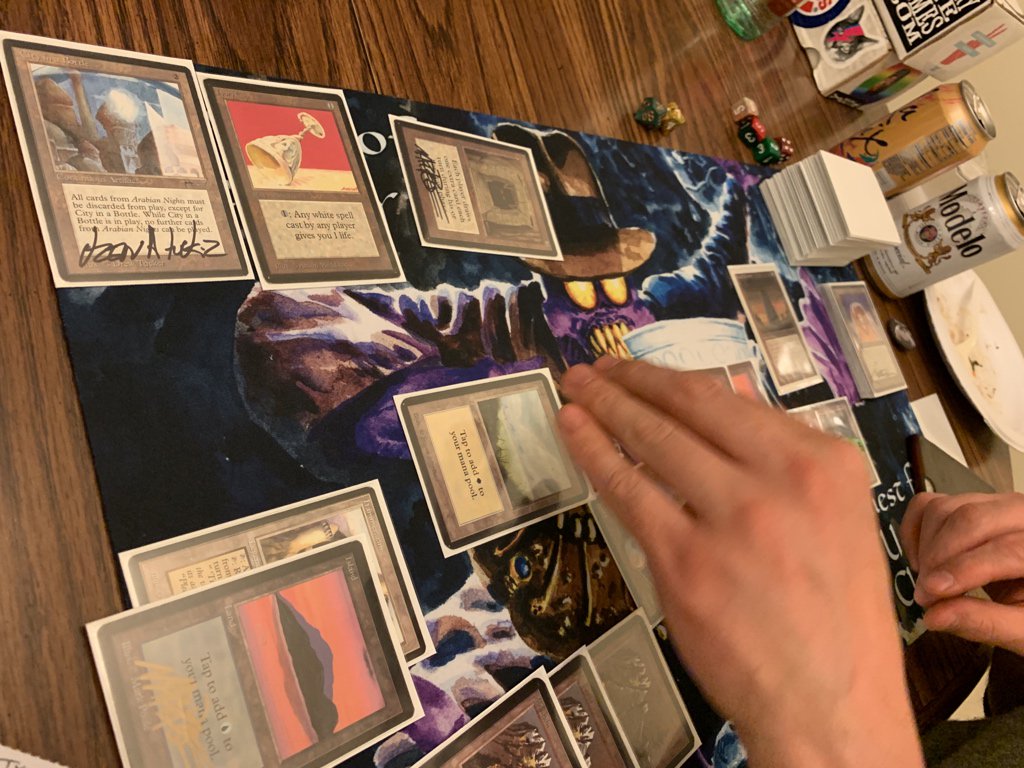 Of all the cards we “unbanned” for this meetup, only Karakas truly felt stifling. Our Elder Dragons are already so fragile that an answer as robust as Karakas is simply too overpowered. We may consider errata so that Karakas cannot target enemy Commanders, but can target all other legends, including its controller’s own Commander. Why do this? It would encourage more Commander use generally and more siqnasty, creature-based combos, for example Hazezon Tamar. It cannot be understated how poor creature & Commander-based strategies are in OS-EDH and any tool to help prop them up must be considered.

Meanwhile, the Blue Power cards and Library of Alexandria improved gameplay by accelerating the match with card draw and setup. These battles can take so long that any way to shave off ten minutes here and there is welcome. Plus, who doesn’t love drawing cards? Finally, as demonstrated above, a T1 LoA doesn’t take over because it just draws aggro. And with City in a Bottle unbanned, LoA is sure to be kept in check. Bottle has the added benefit of checking Island of Wak Wak, which has been an underrated durdle card punishing our Elder Dragons. 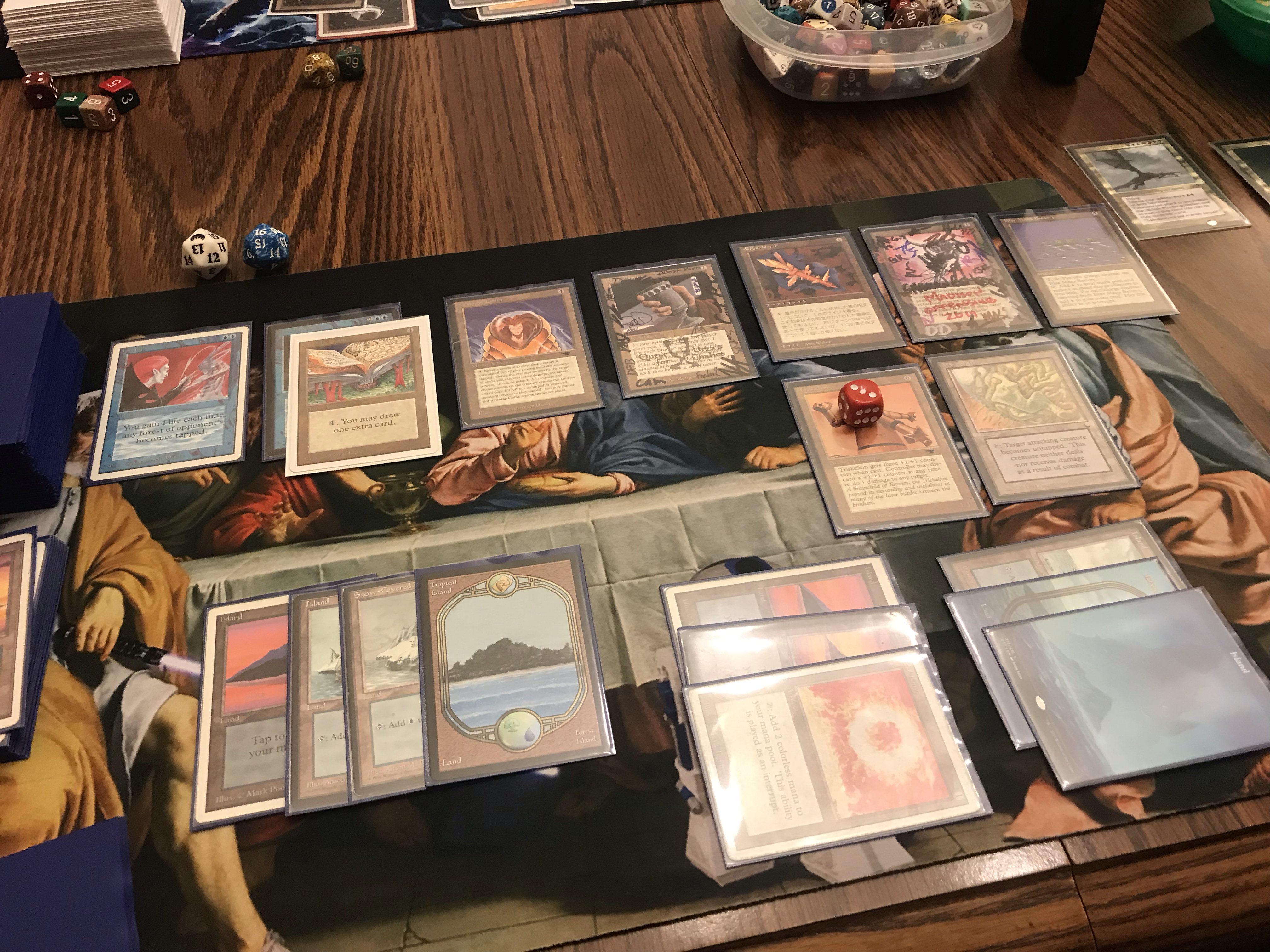 Thanks in part to the fresh blood offered by Lords Silenus & Petray, here’s a role call of some of the siqqest creatures that saw the battlefield on this evening: 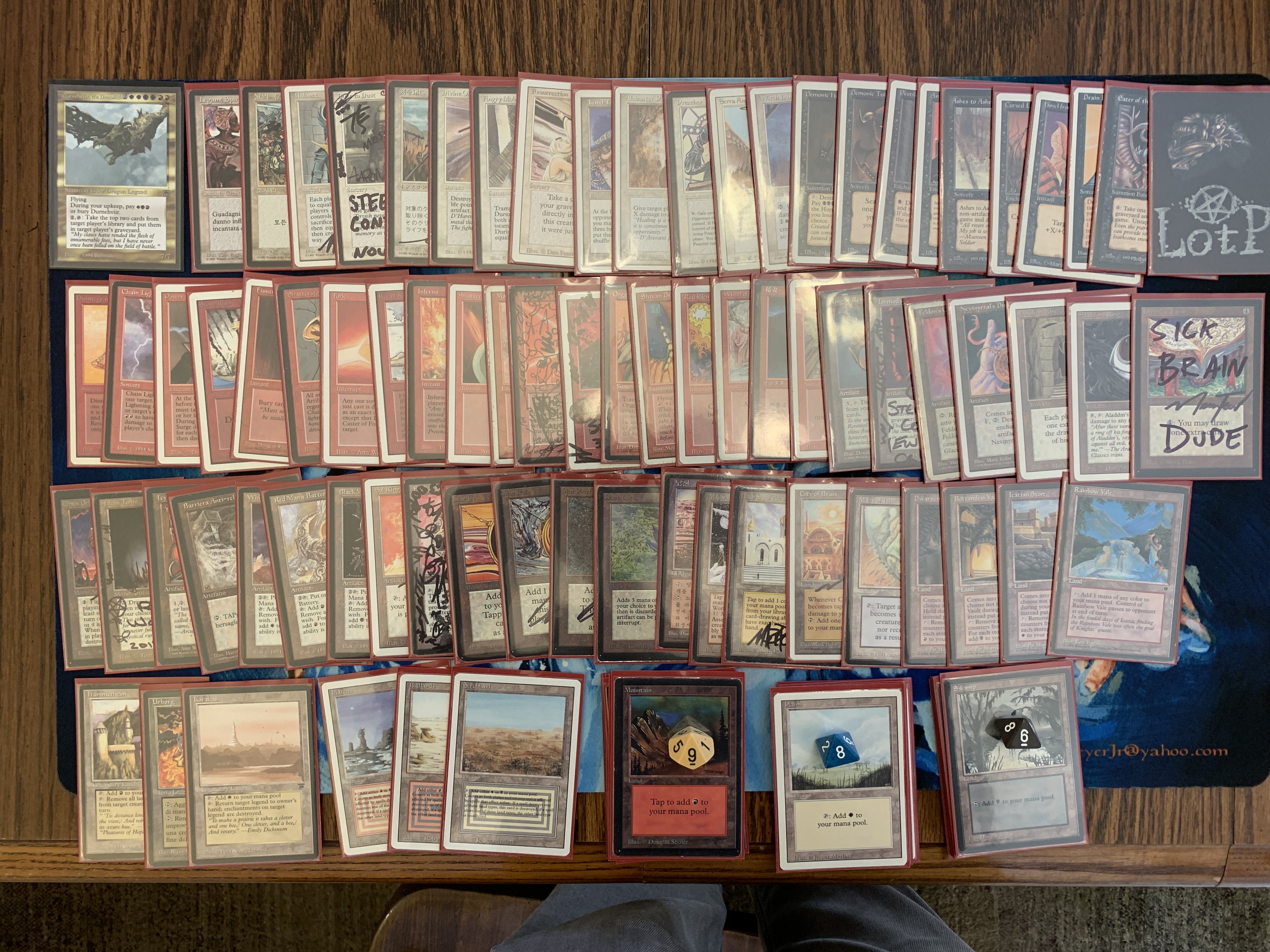 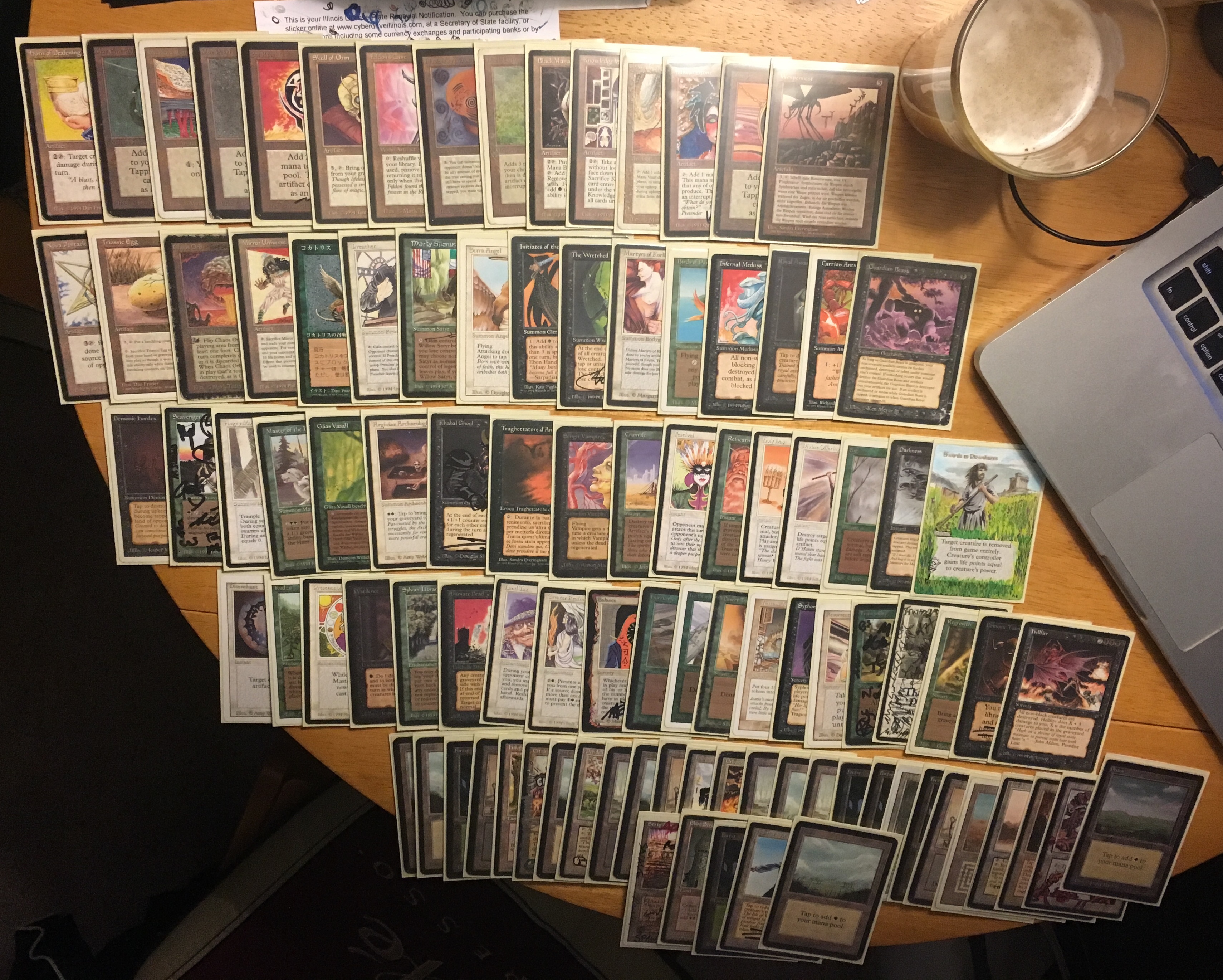 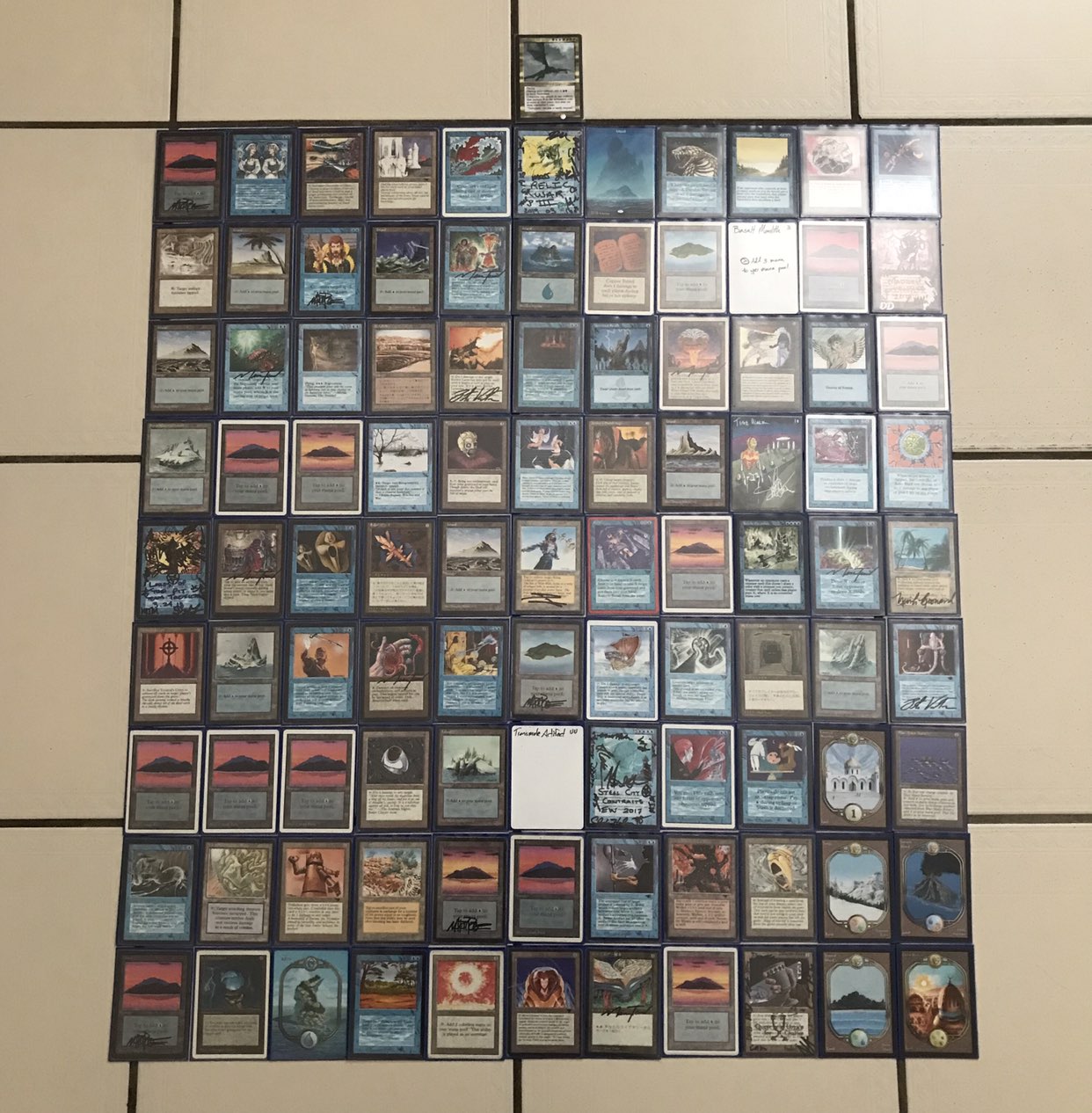 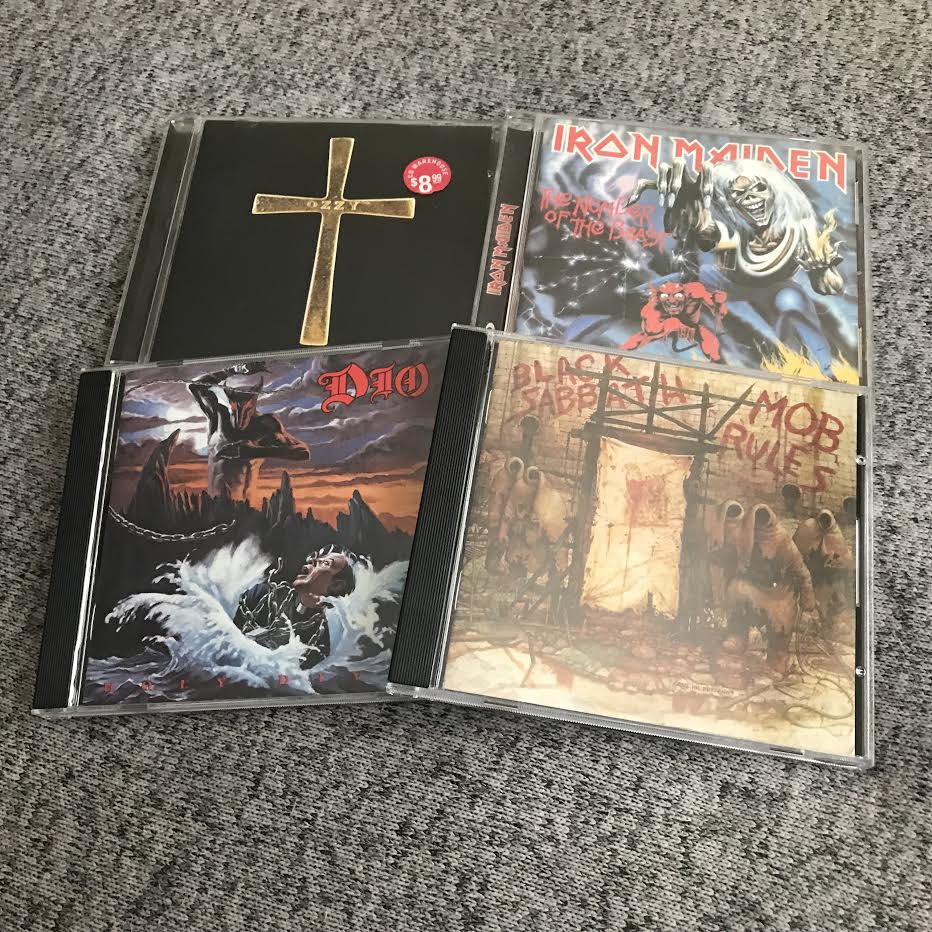 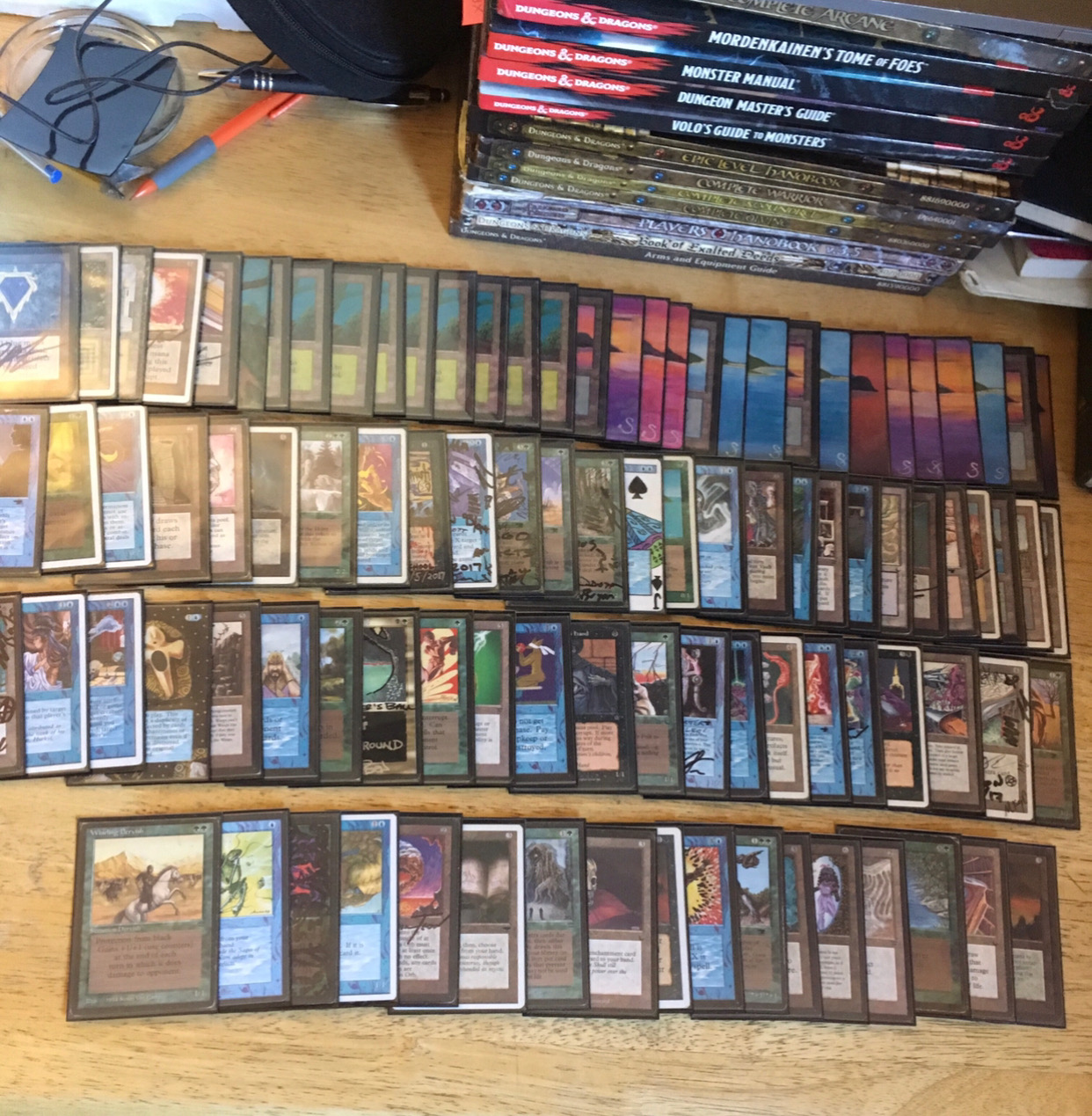 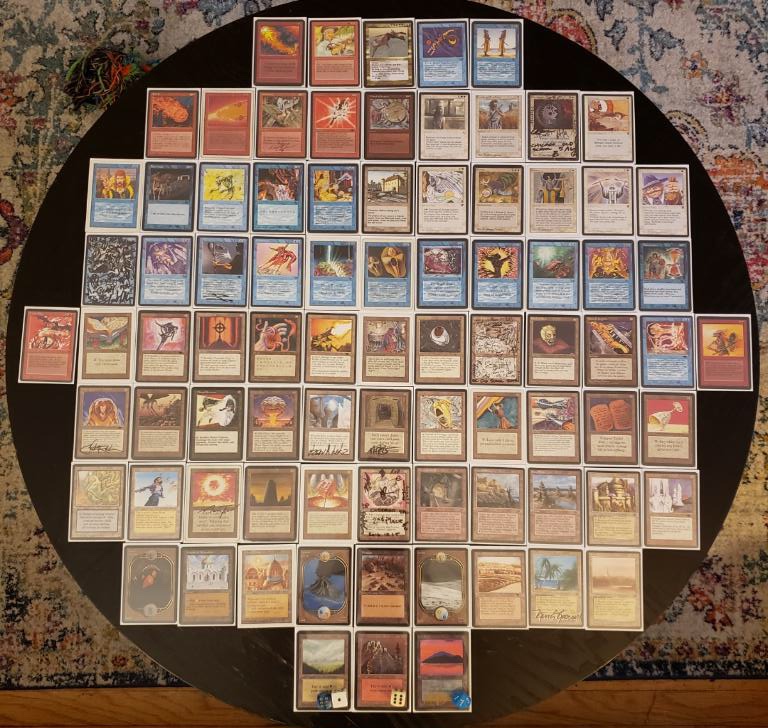 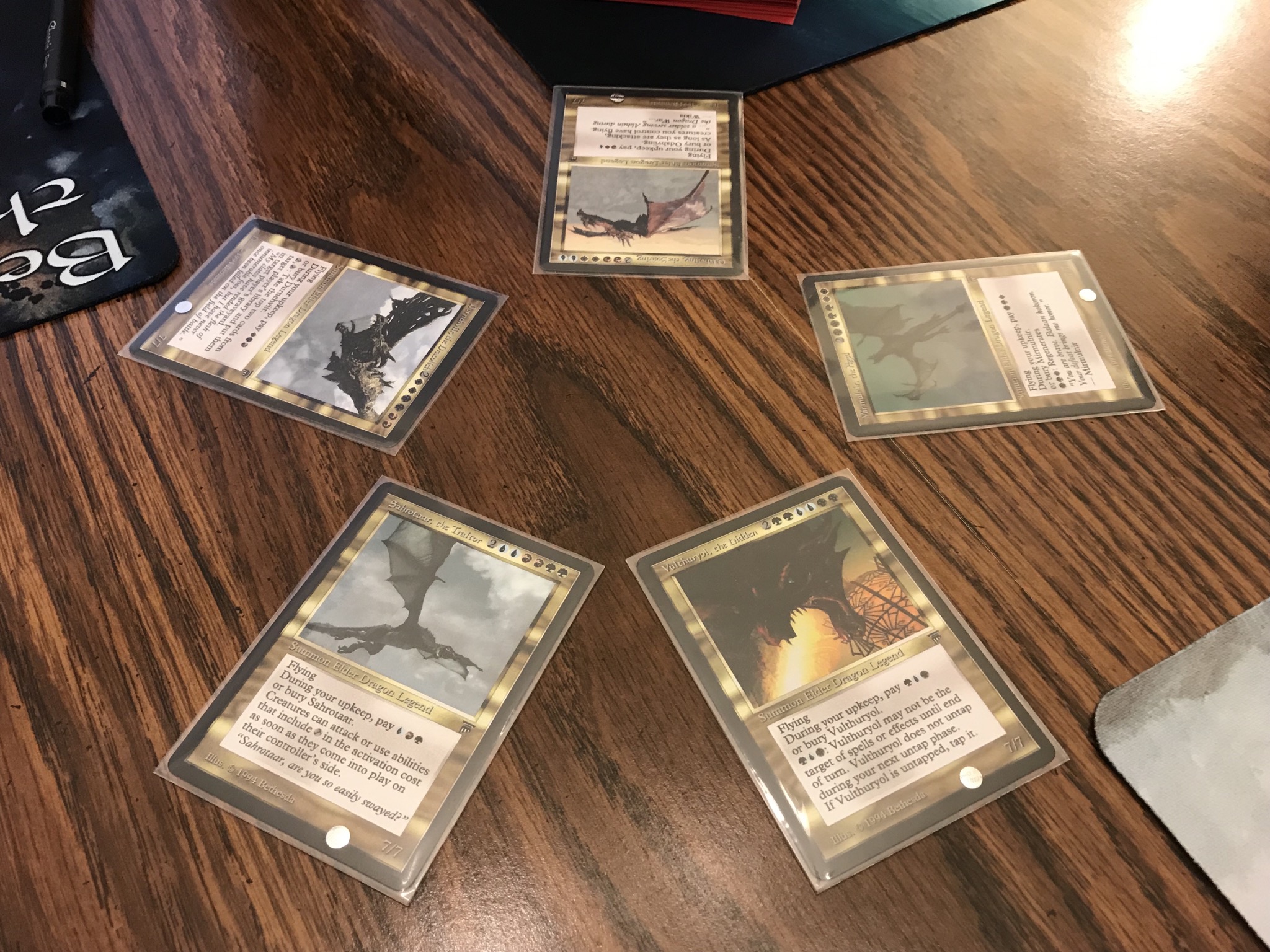