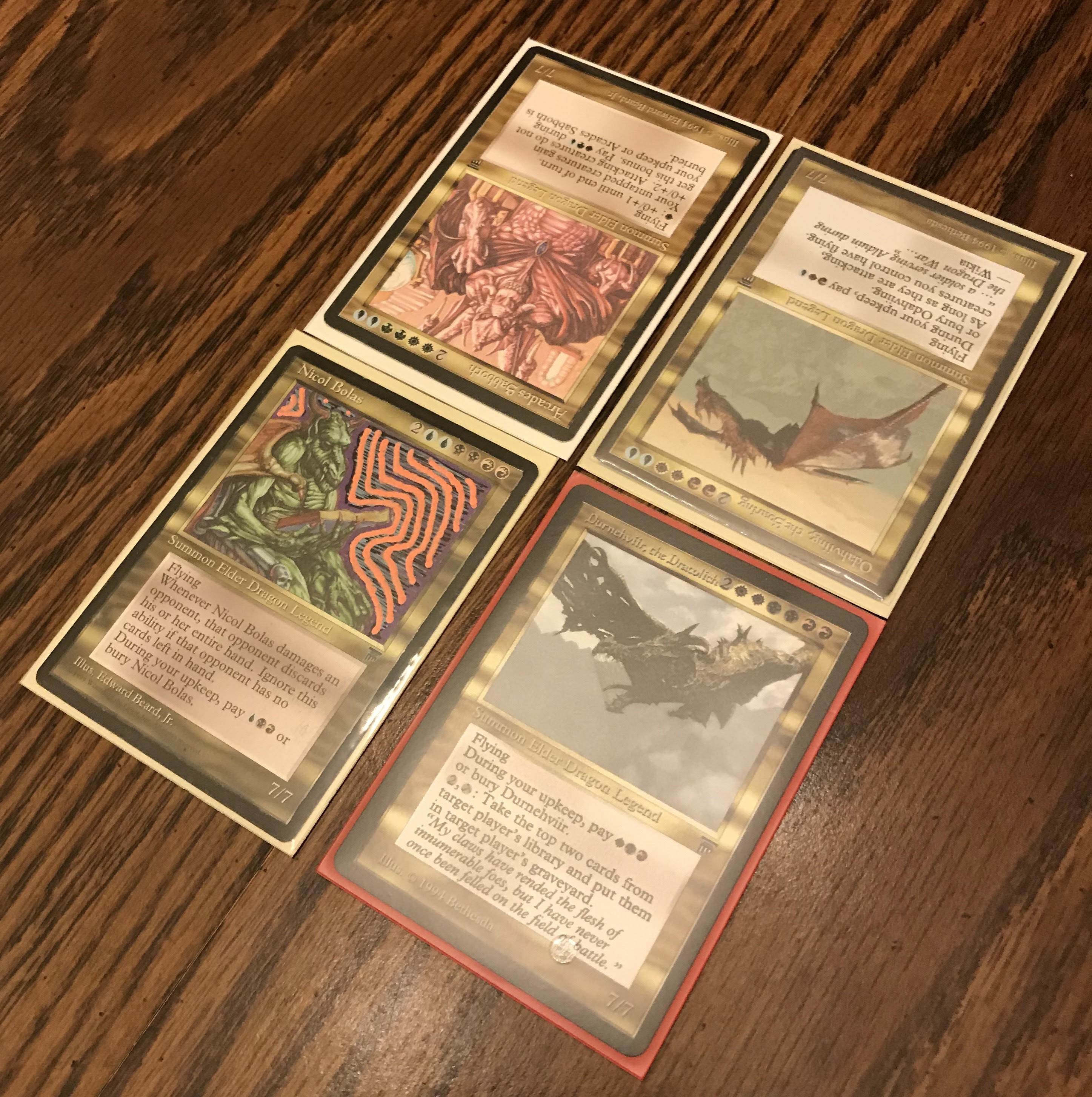 A bag of ghost pepper-dusted chips weren’t the only source of blisteringly hot spice on this crisp, late-October evening. The Council of Elders assembled in Logan Square for another helping of OS-EDH with the following generals: 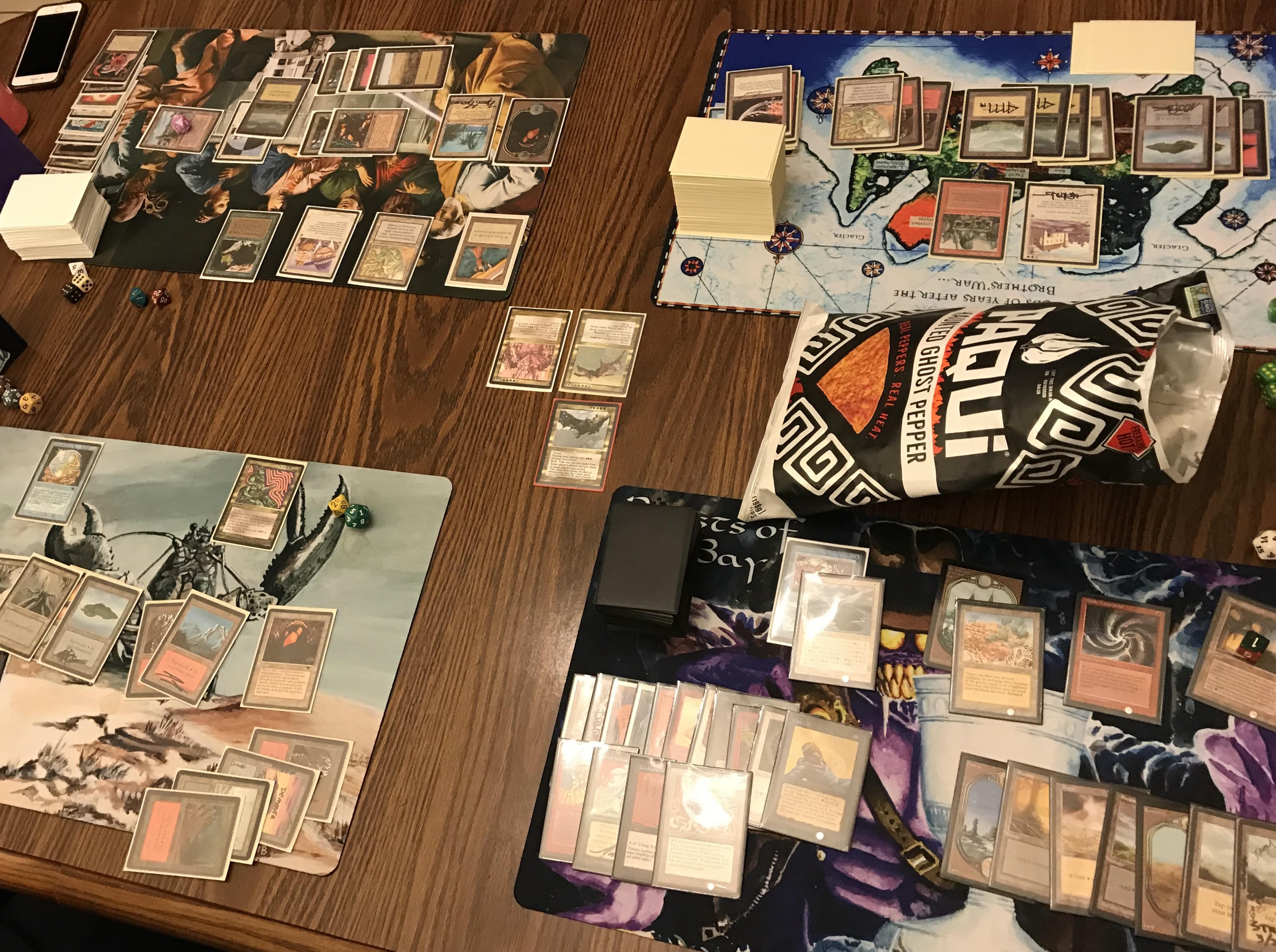 Game one led with Bob dropping an Ivory Tower and amassing a huge early life advantage. Moss deployed Island Sanctuary, a card that worked well at the previous Gathering, before Semmens enchanted said enchantment with Feedback and the whittling began. Bob’s bit of technology was Goblin War Drums, which drew curious looks given there were no creatures on-board in the early going. After the complete futility of creatures in the previous meetup, Bob seemed determined to make them matter this go-round. Our beloved Marty Silenus went deep, deep into the tank, coming back up with Soul Siphon and eliciting a quick “what’s that do?” from Moss as he left the table for a slice of hipstery cheese pizza, procured by Marty from the Co-Op. For his next trick, the Grixis wizard pulled the mighty Nicol Bolas from his hat. Shane wasn’t a viable target thanks to his fortress consisting of Preacher, Ifh-Biff Efreet, Forcefield, Maze of Ith and Island of Wak Wak. Bob assembled his own fleet consisting of Preacher, Dibbo and a Shivan Dragon, as well as Maze and Wak Wak. That left Moss, naked and afraid, with only a Storm World and an “Unglued” Tabernacle of Pendrell Vale, the object of Marty’s ridicule, offering little solace. The fearsome God-Pharoah/Planeswalker/Whatever Bolas thusly bashed in the skull of the evening’s host, binning his hand and sending him to an early exit. 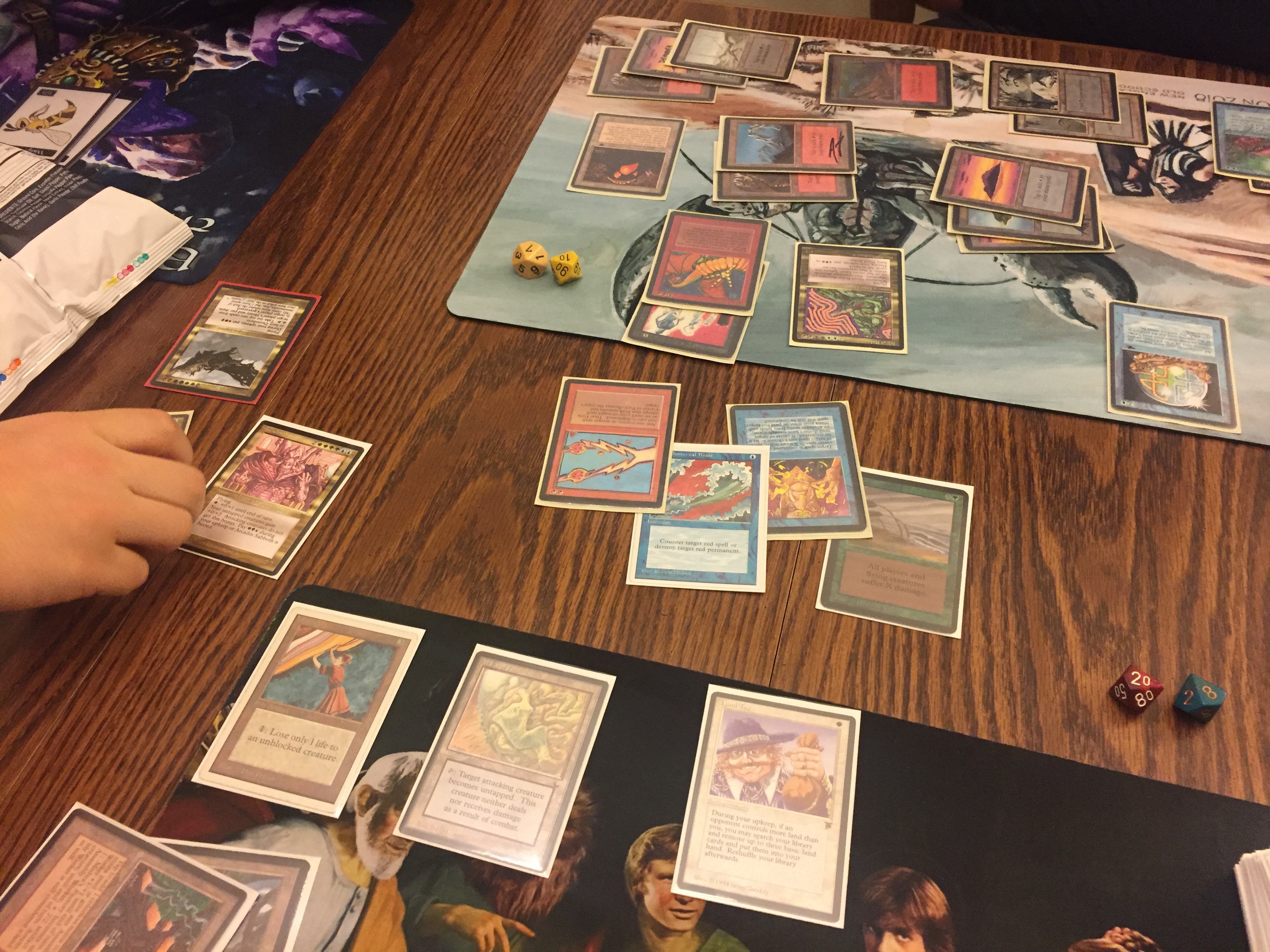 One Timetwister later and we chugged into the mid-game, which devolved into a slog thanks to Energy Flux, Gloom and Presence of the Master. Feedback later made an encore appearance; this time Shane slapped it on Bob’s Moat. Shane unleashed a Hurricane, which Marty Power Sank, to which Shane responded by Blue Blasting Bolas back to the Command Zone, to which Marty Forked* onto Bob’s Odahviing. In another squirrely interaction, Bob used his Preacher to nab Marty’s Hell’s Caretaker, then used said Caretaker to bin a Rukh Egg, bring back Dibbo and net a 4/4 Rukh token in the process. Brilliant! With the Menaced (via War Drums) flyers, and with Marty’s Swamp King chilled firmly behind the Feedbacking Moat, Bob was able to harass Silenus from the skies. Shane then used Recall to recur Hurricane and unleashed it again to kill off Marty, who looked down in his hand to see a stilled Red Elemental Blast. A single, salty tear fell to the tabletop. The Feedback Redux, meanwhile, had drained away Bob’s life total and Shane capitalized in-style, using Aladdin’s Ring to backhand Bob for a game one victory.

(*Here we collectively punted on Fork, because Marty should’ve Forked the Power Sink to Blue Blast. We forgot how to apply the X portion re: Fork, thinking Fork’s caster had to pay it (Marty was tapped out), so Marty chose the lesser target of Forking Blue Blast. D’oh!) 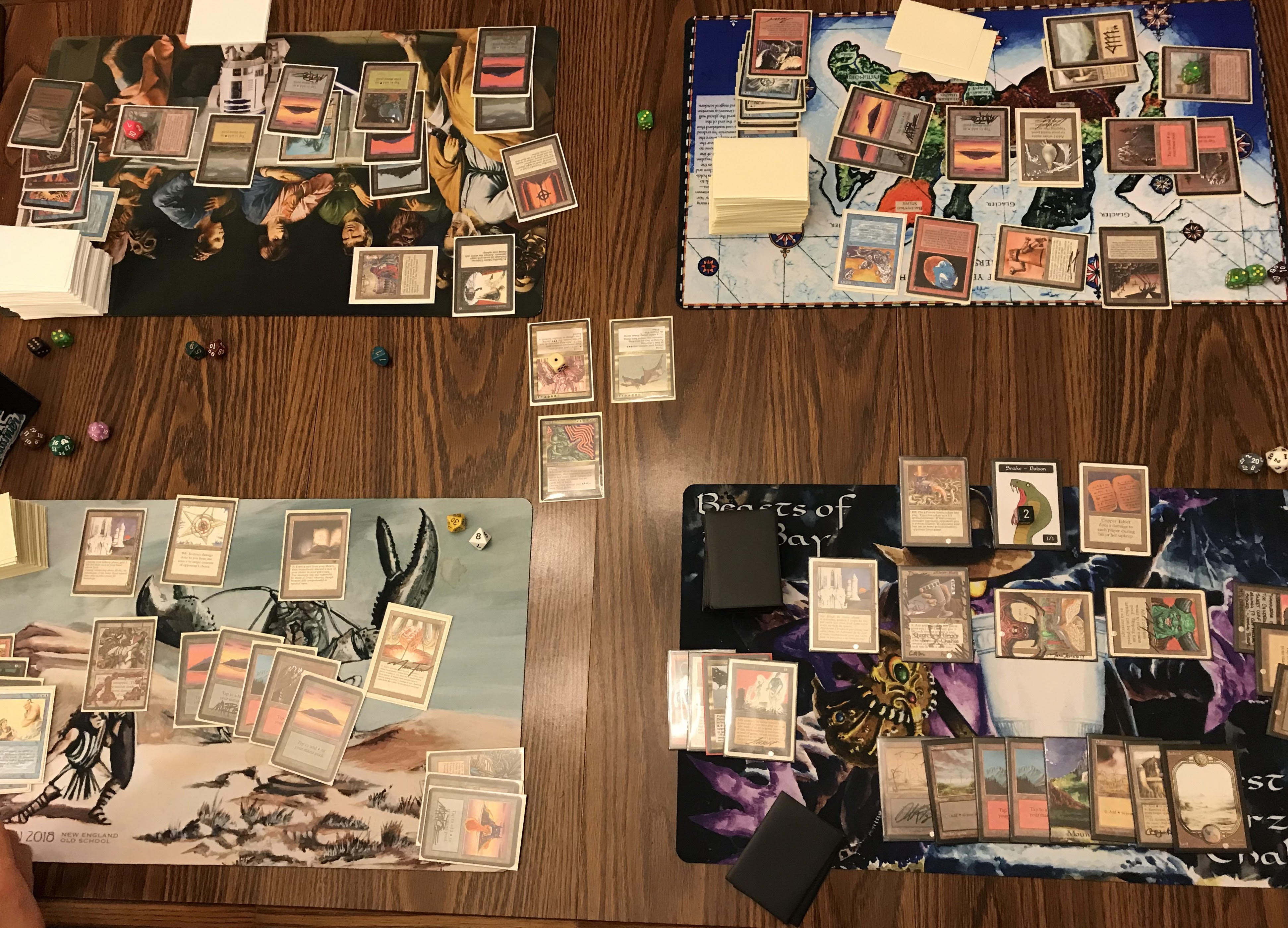 The coterie of madmen shuffled up for a doubleheader performance, hoping to out-pace the trudge in game one. Moss played a T1 Ivory Tower. Marty played a T1 Ivory Tower. Shane played a T1 Copy Artifact, copying Ivory Tower. Uh-oh… we settled back in. To continue this odd mirroring, Bob attempted to play Manabarbs, but Shane thwarted it with Power Sink. The next turn, Moss attempted to play Manabarbs, but Marty thwarted it (again!) with Power Sink. Moss’ Copper Tablet nibbled, mostly at Bob because he lacked Tower this time. Haunting Wind made a terrifying cameo but was quickly Disenchanted. Turns breezed by and more counterspells rained down. Durnehviir was Mana Drained by Bob, who converted the windfall into a Triskelion. After electing to place the Dracolich in the bin instead of the Command Zone, Moss’ Animate Dead was Spell Blasted by Shane. Durnehviir now found himself trapped in the graveyard - what an ignominious fate for a powerful undead Dragon! Moss threatened to have everyone ejected from his home, but the game rambled on, Bob chewing up the competition with Trike plus a swarm of Hive tokens. Marty jiu-jitsu’d some damage using Nova Pentacle. Not to be outdone in the token generating department, Moss played a Serpent Generator. 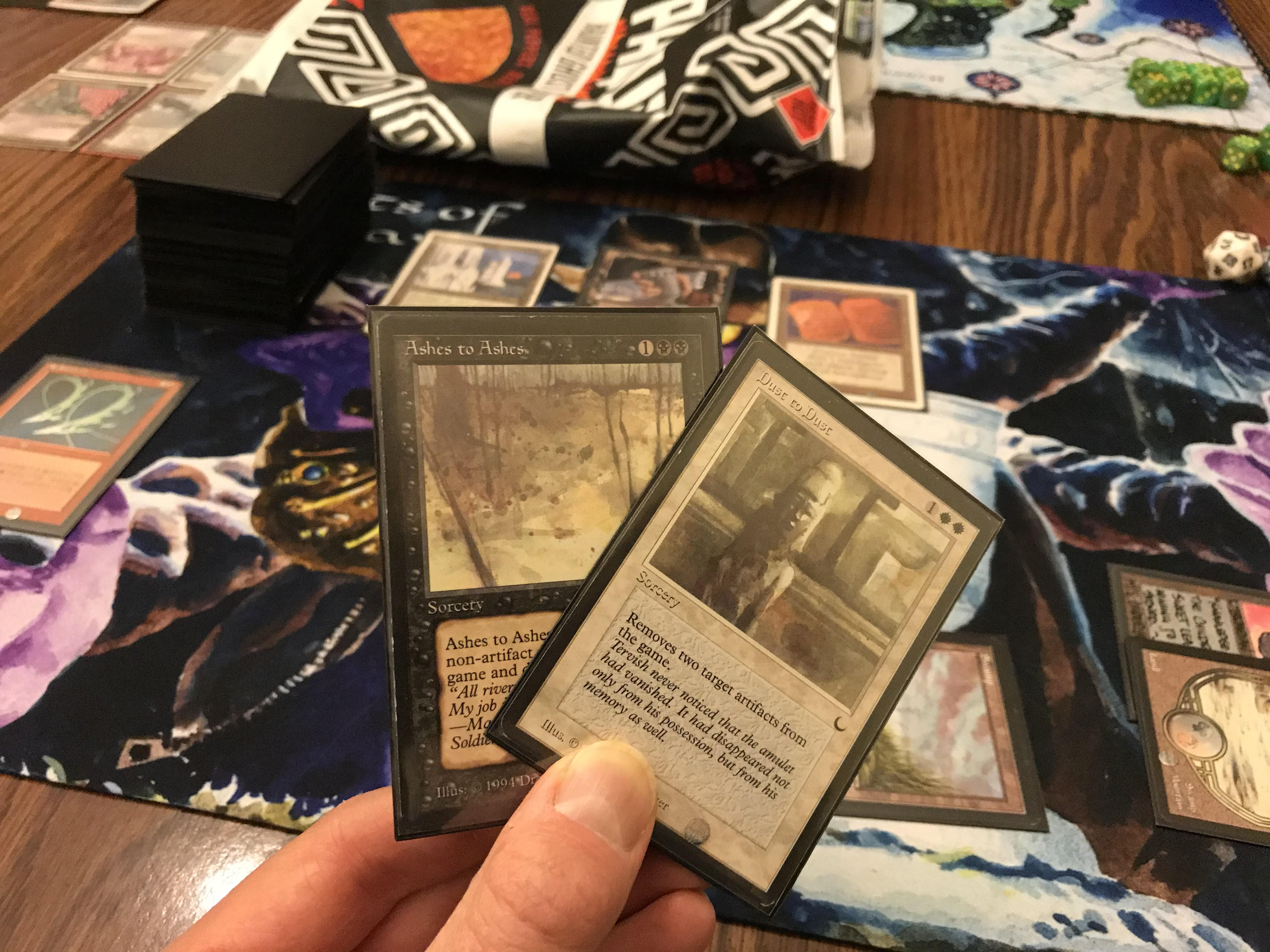 This time it was Marty who amassed the strongest life total, but Shane took advantage (as he always seems to!) by bringing forth a Mirror Universe and swapping. Aided by some miser-minded storage lands, Shane unleashed yet another devastating Hurricane, felling both Marty and Bob in the great storm. Marty was left to appreciate Pearl Jam’s 2006 eponymous record, which he seemed unable to recall or perhaps had forgotten after years of substance abuse. Shane now stood at 9 lives to Moss’ 5, but the Mardu Mage had played Land’s Edge on the previous turn and used his Lords of the Pit-themed Jayemdae Tome to amass a full grip. Four discarded lands later… Shane now stood at a precarious one life, tapped out and vulnerable. Verily, the humble serpent token slithered over to Semmens and secured the game two victory for Moss. 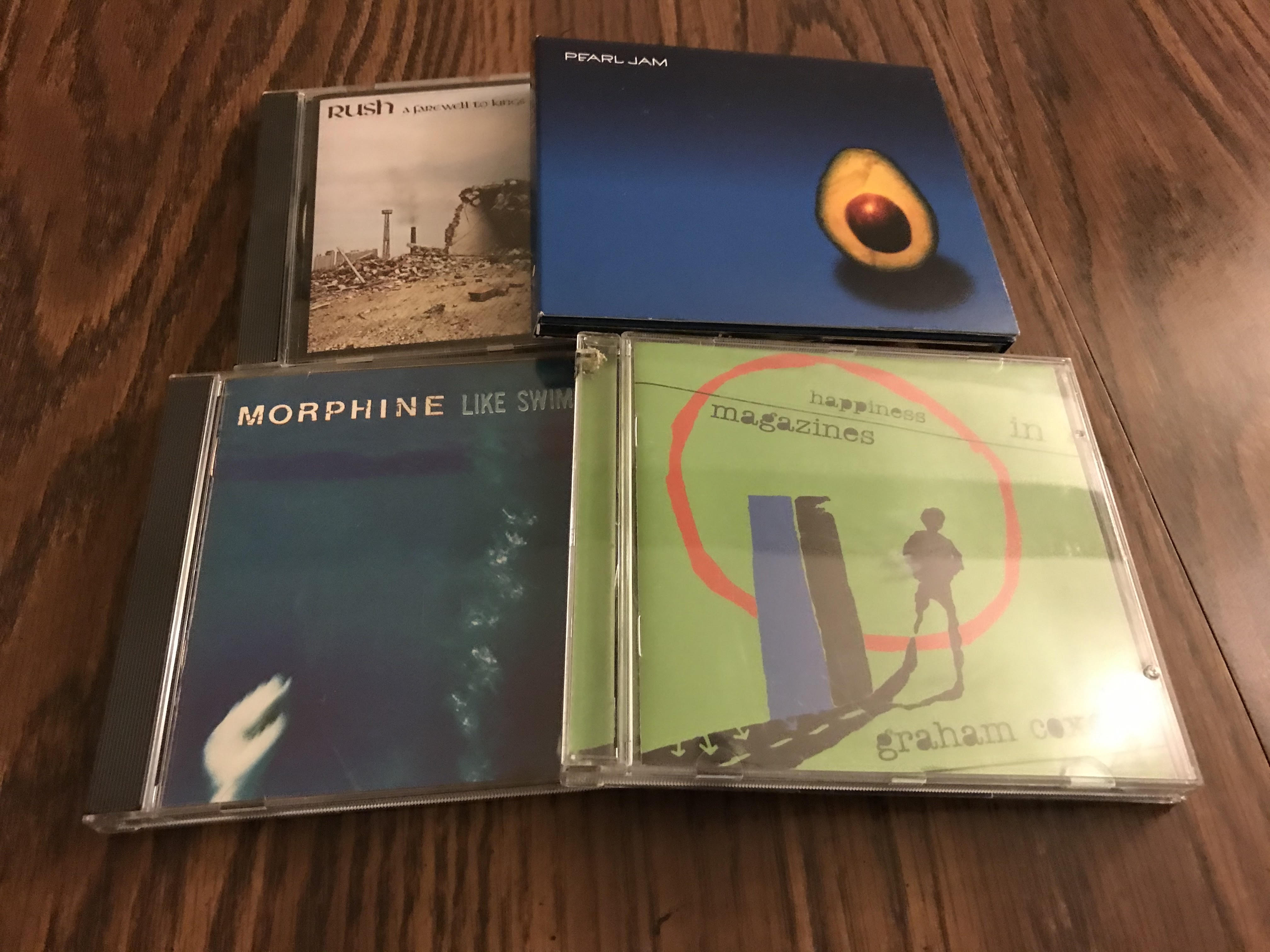 Below is our reconstructed tally of OS-EDH wins among Lords: 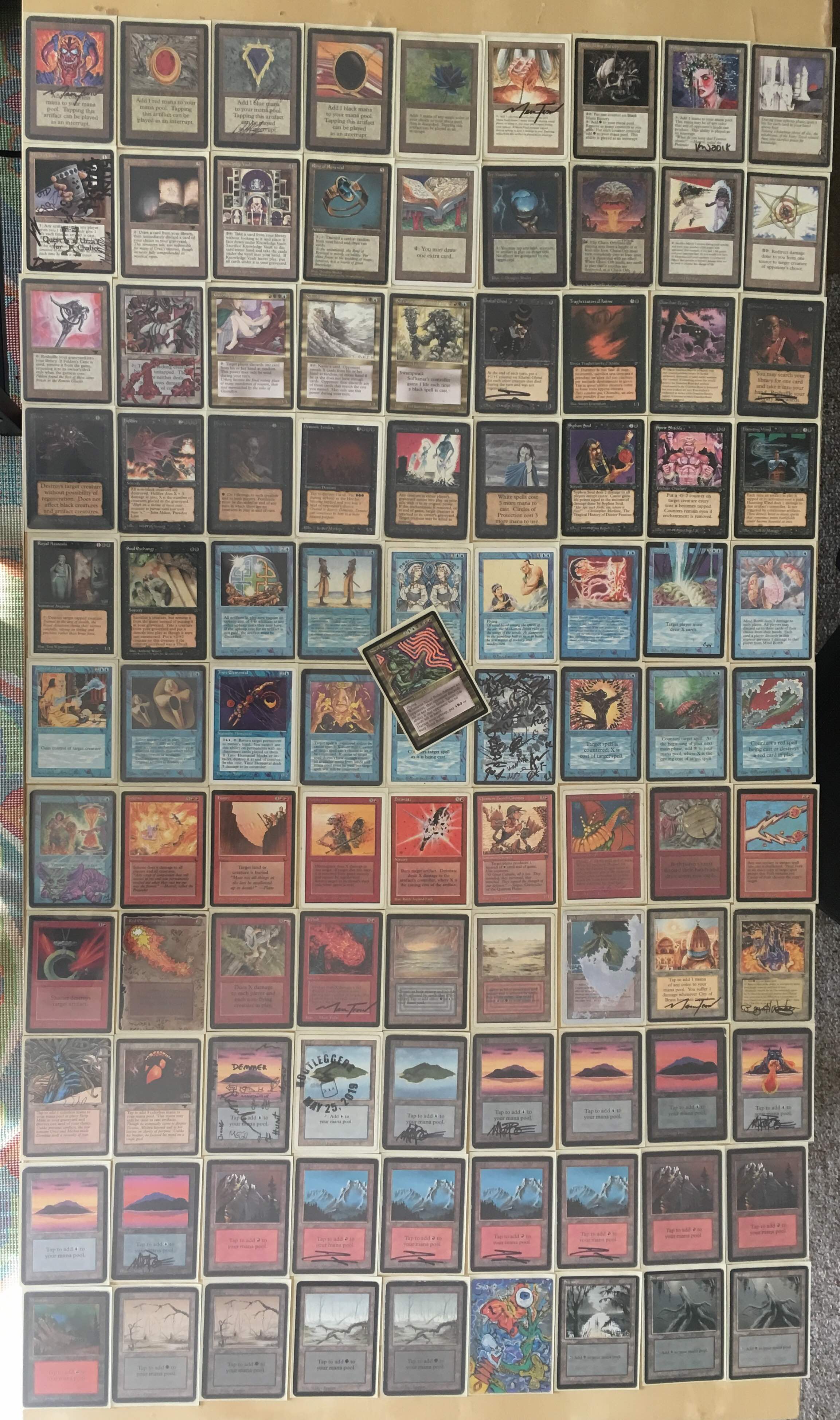 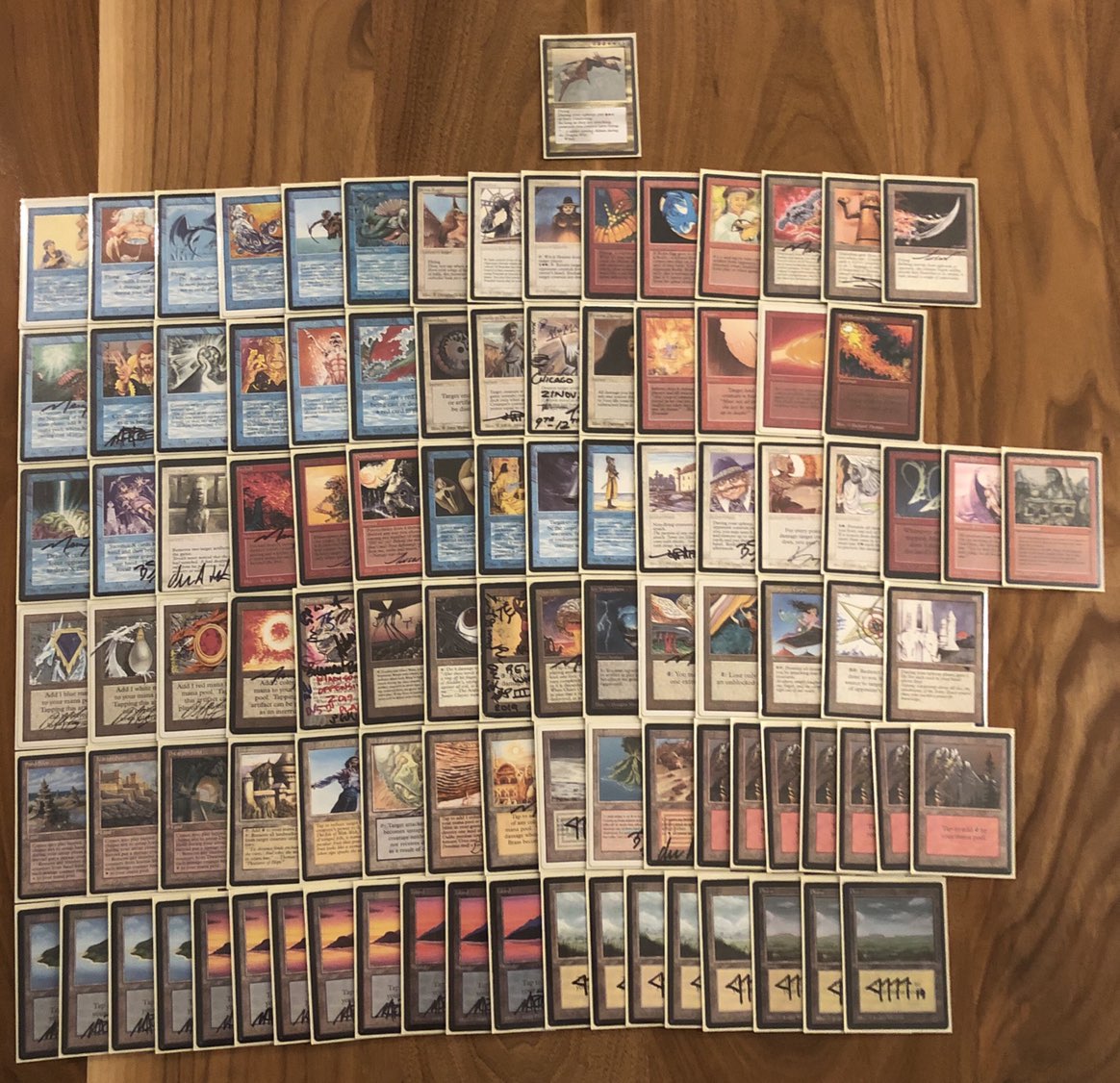 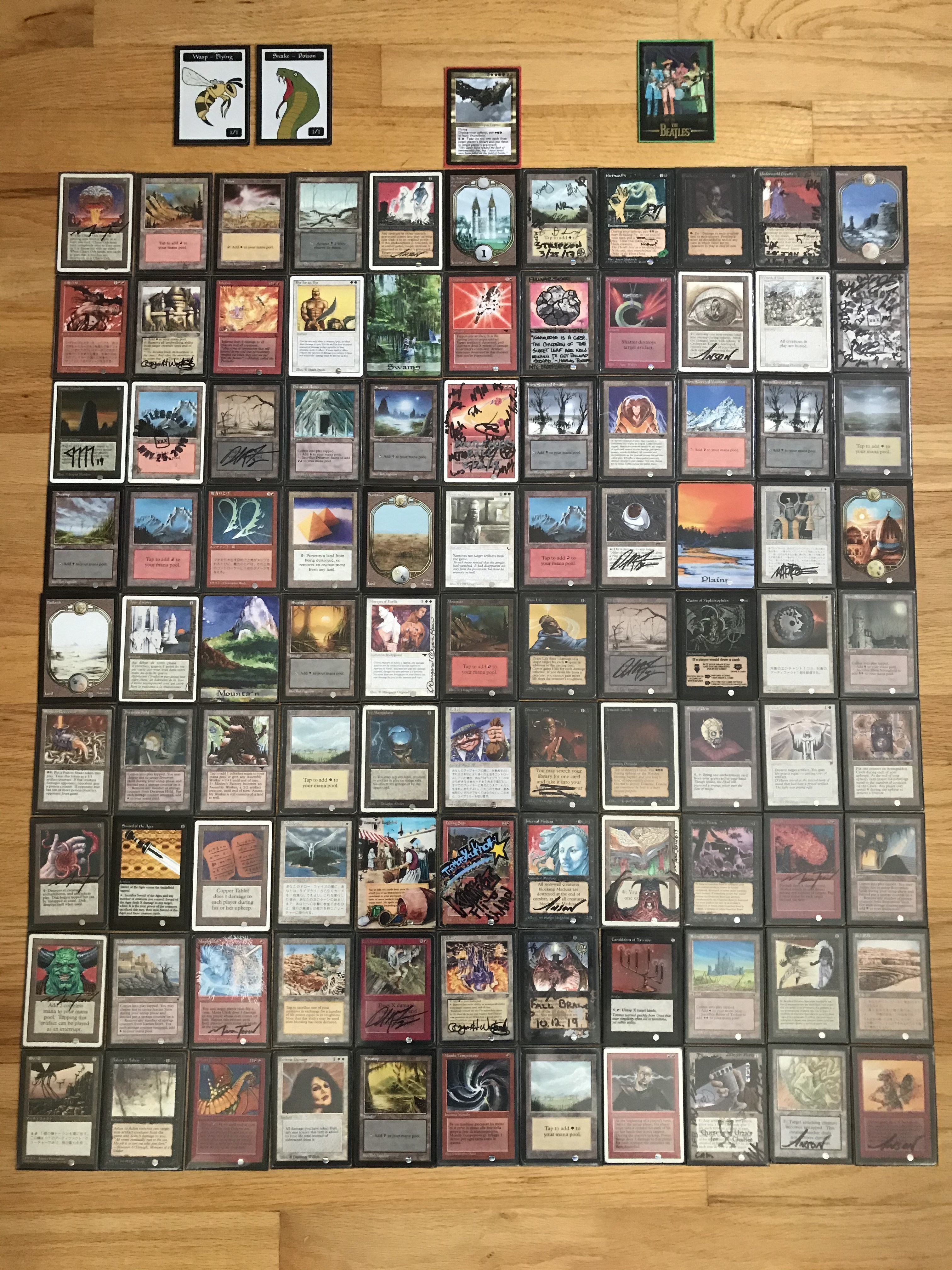 ← Once in a Great While
Pitcast - Ad Infinitum →