In my preteen to middle teenage years I lived for Gaming Saturdays. The inconvenience of weekdays with their homework deadlines, nagging teachers and social minefields melted away Friday nights before the anticipation of a Saturday. This was the mid-1990s and there were many games: Magic: The Gathering, of course, but also TSR’s Advanced Dungeons & Dragons, Games Workshop’s Warhammer or Blood Bowl, Decipher’s Star Wars Customizable Card Game, White Wolf’s Rage plus whatever over-hyped and under-cooked non-MTG game WOTC burned shelf space with that month. On Saturdays I’d wake excited and after breakfast either catch a ride from my stepmom in our ‘94 Dodge Caravan, forest green, or I’d strap my card box, source books and/or miniatures case to my bike and hit the pavement. The destination would be one of several comic or card shops around my hometown. 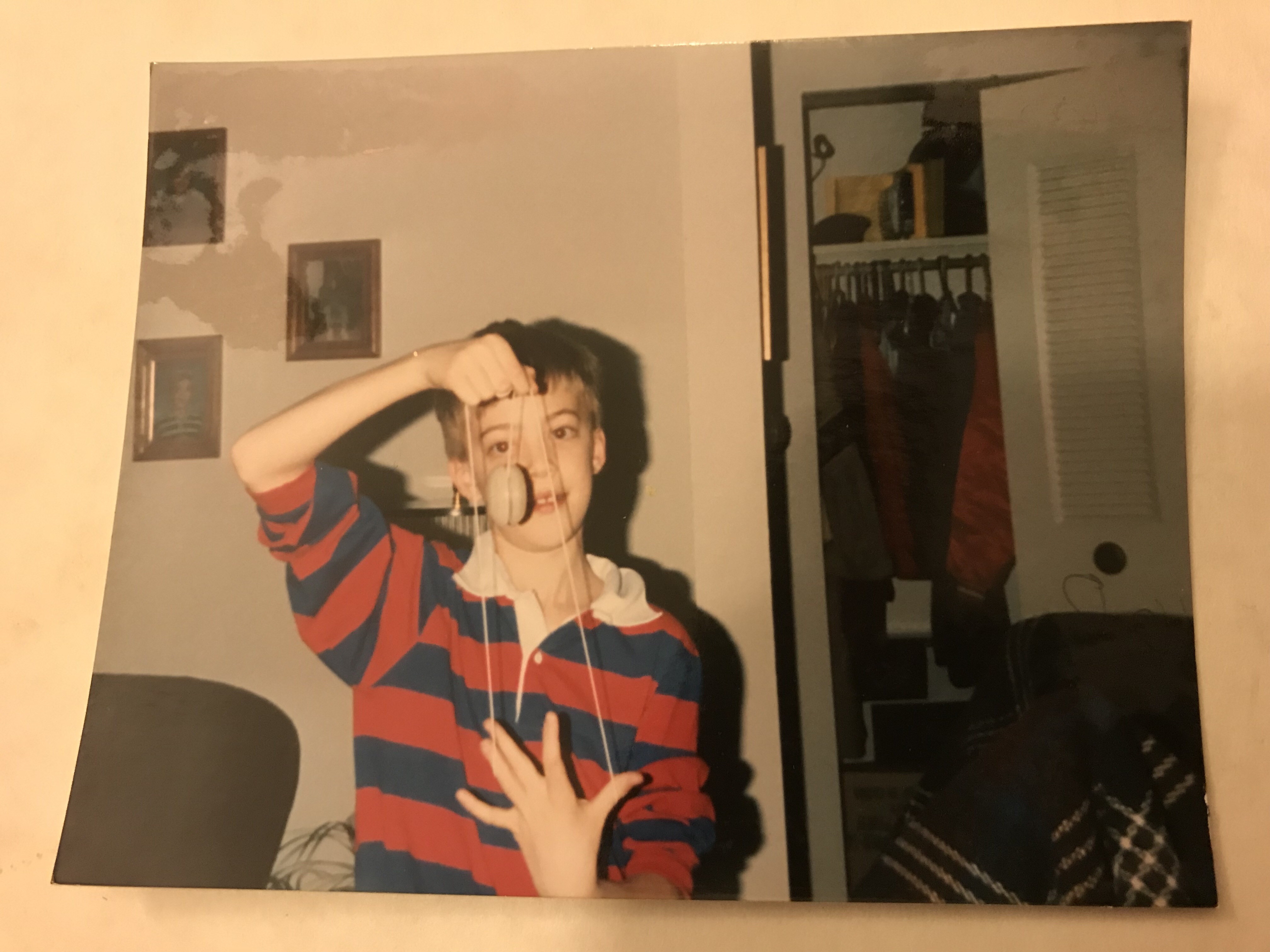 Like so many of us, my original hometown “LGS” was actually a comic book store, The Comic Shoppe Plus, to be exact. My foray into comics began as a wee man circa 1991 and places like the Shoppe were to me equal parts Shangri-La and El Dorado. The rows upon stacks upon rows of comics dwarfed the single rack at the local drug store. Highly detailed, gothic statues of sci-fi/horror (think Freddy & Jason) stars with their impossibly exorbitant price tags sat behind the counter… who could possibly afford such treasures? Miniatures and modules beckoned from shelves and pegboard walls. Older kids hung out here. They wore all black. They smelled of cigarette smoke. This was a dangerous place. It was all too much to take in and all too much for my meager paper route money to handle. I bought my first starter deck of Revised and, to quote Vonnegut from Slaughterhouse Five, “so it goes.” Little did I know then that I would be hooked on such underground “geek” properties for the rest of my life. 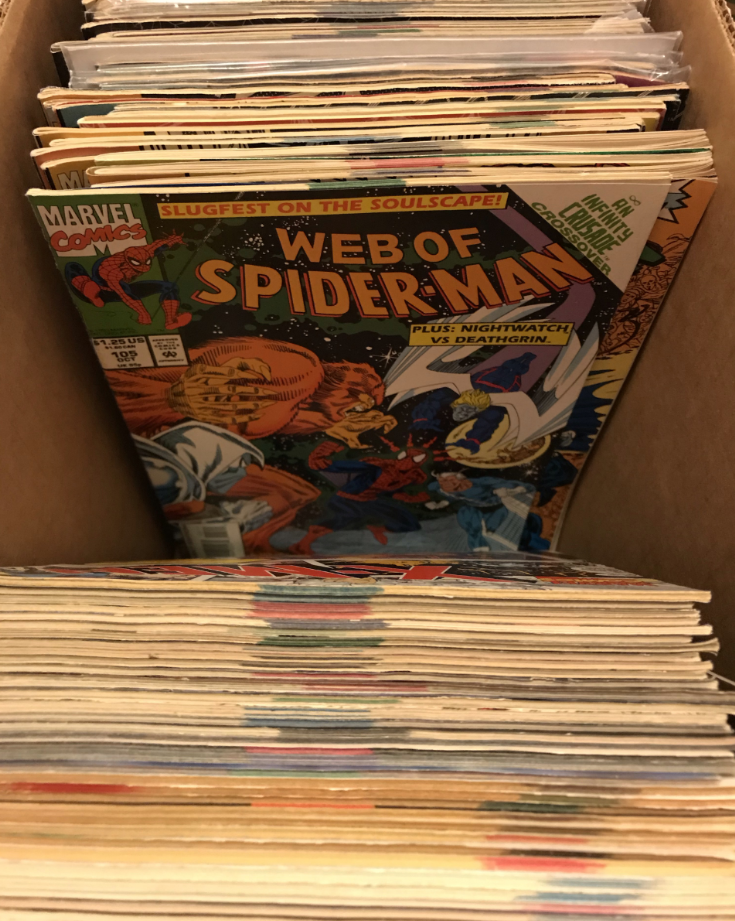 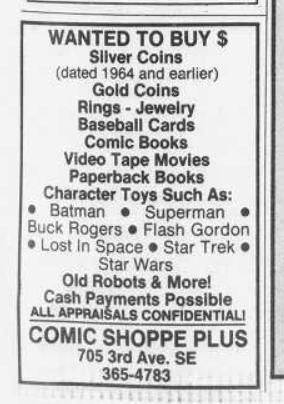 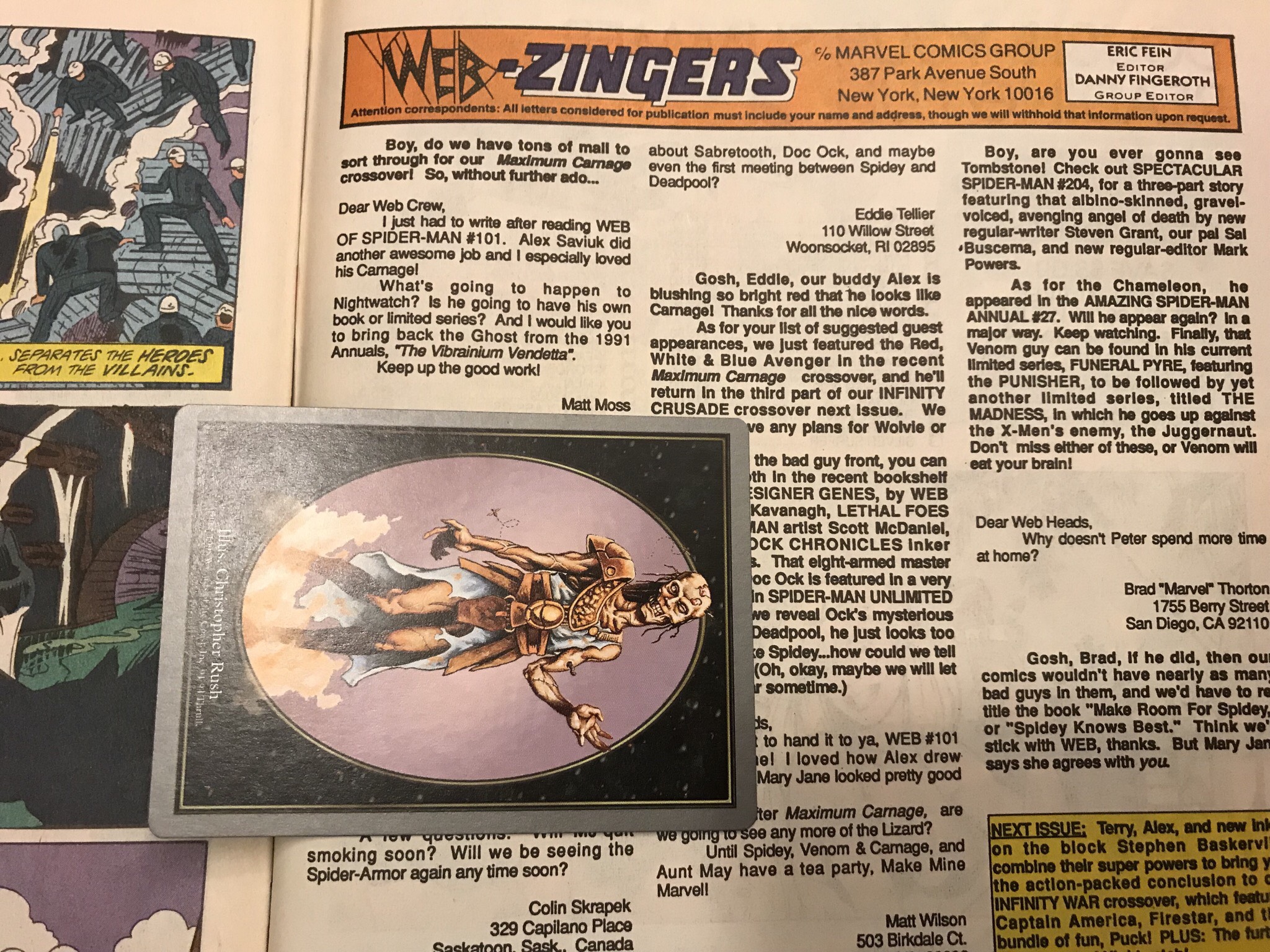 Herein lies the forgotten role of a place like The Comic Shoppe Plus or those myriad other baseball card, coin, toy and junk shops, the brick-and-mortar gathering places we relied on in our youth to meet with other geekily-inclined kids. Unlike today, when Marvel Studios is an economic powerhouse, when Star Wars has its own Housewares section at Target and when D&D and MTG are mere balance sheet entries for a publicly-traded company, in those late ‘80s or early-to-mid ‘90s days, you really had to search in your town’s underground to find the other “geek kids” that would spend an afternoon quoting MST3K and Spaceballs or dissecting The X-Files and Dragonlance novels around the gaming table with you. A Saturday afternoon spent gaming could get me through a week spent in the regular world where I knew some people with passing familiarity or interest in the same stuff as me, but where I always felt I was the most “into” the stuff I liked and nobody else truly understood my obsessions.

Returning the focus to Magic, what would later become “Old School” but what then simply existed as all there was, let’s quickly remember that in the early days we didn’t travel with a single deckbox of 75 heaters, we brought all our cards to the shop! Our entire collection, the whole enchilada. One way to measure the seriousness of the dude was by the size of his card box. I began as most did, with a shoebox + rubber bands before embracing the technological and origami-cal elegance of the single row, folded cardboard box before graduating to the double row, lidded box, packed with bulk from Ice Age, Fallen Empires and Alliances boosters, all that bumping elbows with shittier CCGs. Booster boxes were massive capital outlays for me at the time but I didn’t grasp (or care about) the upside down conversion rate of Penny Savers delivered into alternate art copies of Goblin Grenade. Quantity over quality, in those days, was the route to a successful dick-measuring. In my local scene, we had a That Guy who would bring an unfathomable Four Row Box to the store. Young minds were flabbergasted; weren’t those intended solely for merchants? How could anyone compete against such an arsenal? 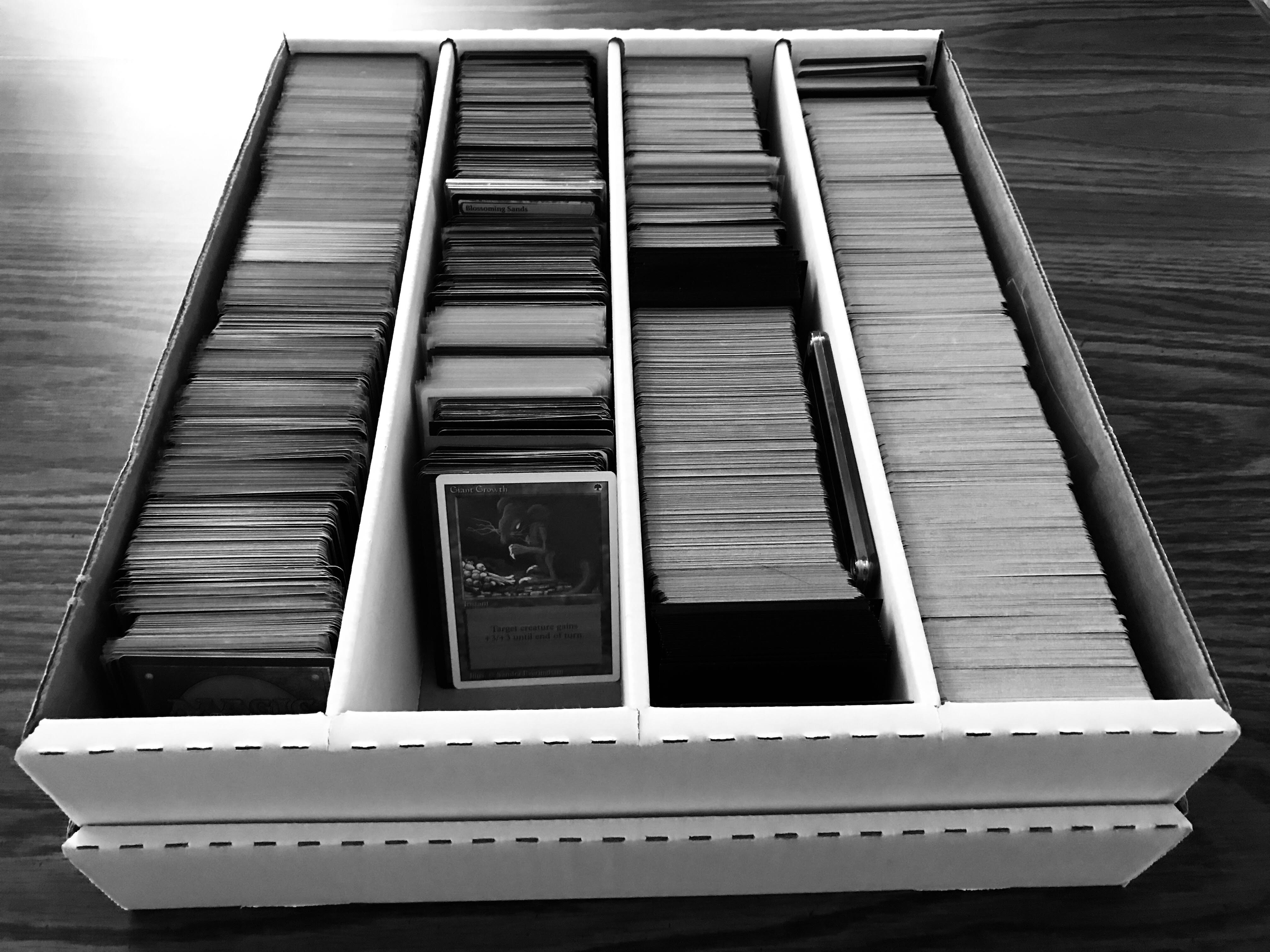 The quality of the actual gameplay in those days was crude and was really just a proxy for hanging out, telling jokes, quoting movies or doing impressions. My crowning technological innovation was to attack with Brass Man, then later have Stone Giant heave the tapped automaton at my opponent for extra damage. Brilliant! Sprawling, multi-player affairs could chew up an afternoon until a couple of us lingered, helping clean up the shop for a pack of Chronicles or some other pittance. Later, when people began to get cars, we could push the danger to another level by climbing into some late-‘80s sedan and heading off to anywhere we pleased. It’s not like our parents had a way to contact us. Gradually, the older kids matriculated on, getting jobs or girlfriends, and fell by the wayside. Eventually, so did I. 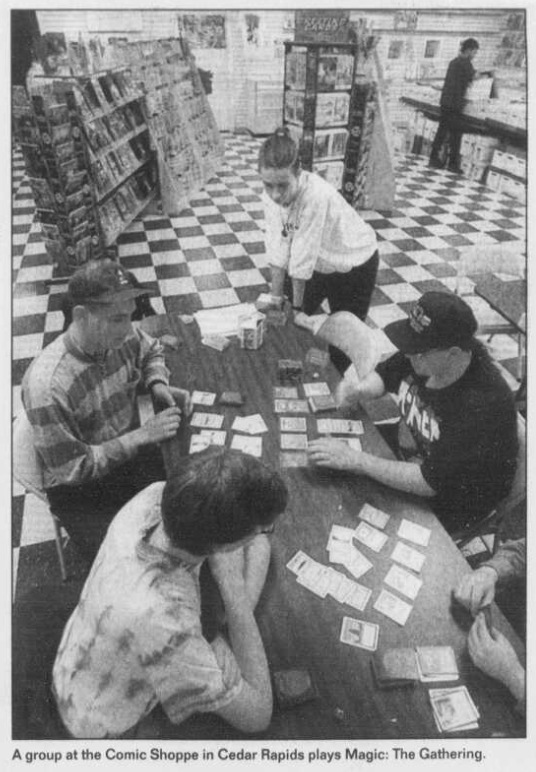 The local shops closed down throughout the middle to late ‘90s. Comic Shoppe Plus, Phoenix Cards & Comics, M&M Comics, they all withered and died together with that initial mania centered on MTG and its spawn of wannabes. Then the most-successful of my area stores, Iguana’s Comic Book Cafe, an early pioneer in the sale of MTG singles via mail, closed in 2003. I’d purchased my booster box of Alliances at Iguana’s, then hopeful for copies of the “new Juzam” that was Balduvian Horde yet ending up with a grip of Storm Crows. As an undergrad journalism student in 2003, I covered Iguana’s last day for The Daily Iowan. It was the end of an era. 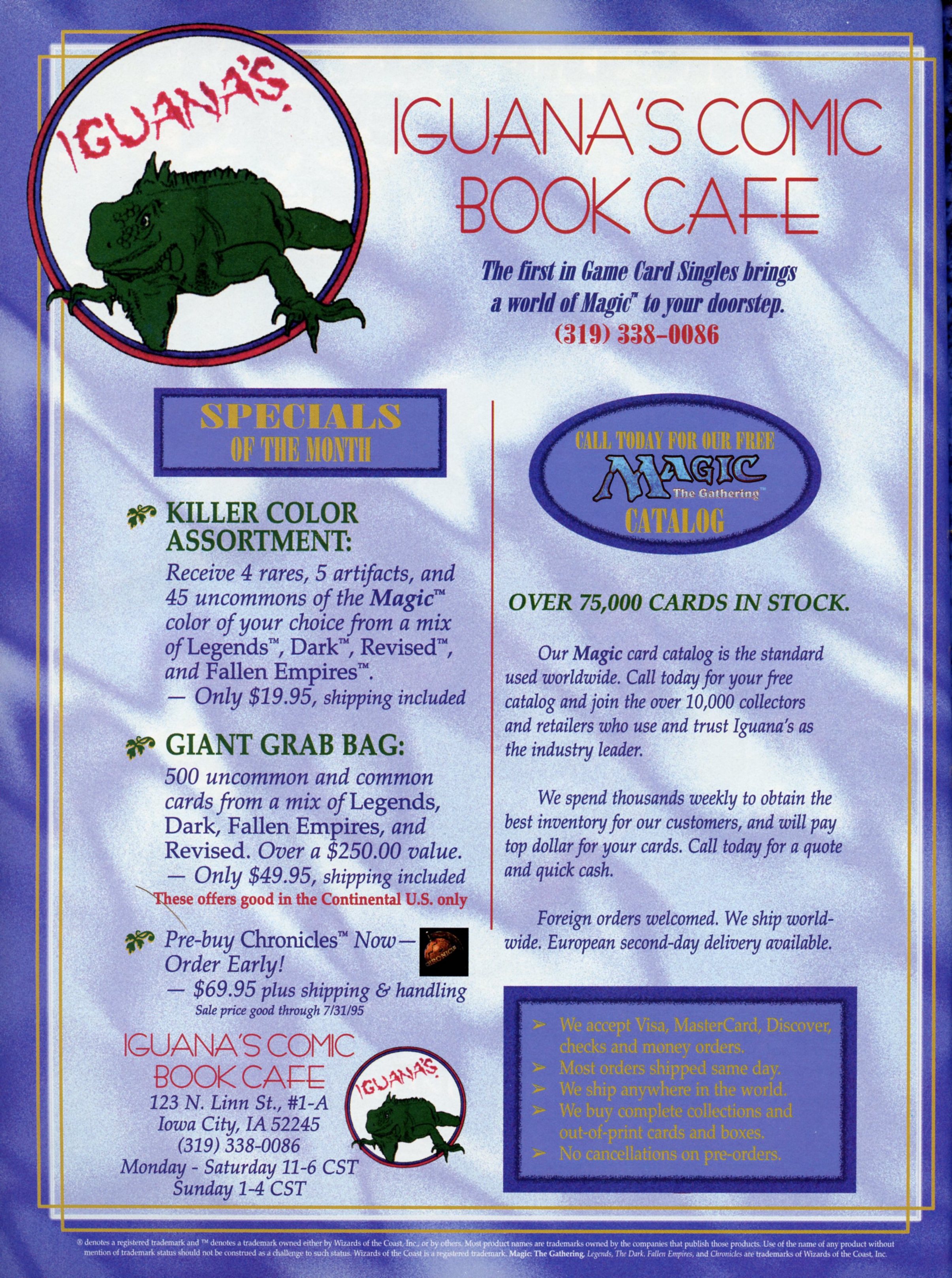 The demise of brick and mortar retail is now widely understood. How many empty big boxes dot your city? The role of the gaming store as critical hub for geek culture gathering was replaced with numerous online platforms where individuals can emerge at will from any spider hole to engage in on-demand gameplay or shit-talk past each other from the comfort of an arm’s length. Immediacy has in some ways led us to become over-communicated yet under-connected. Perhaps this trendline doesn’t stretch into the indefinite future, however. The explosive growth of retrospective Old School MTG formats over the past several years shows that, at some point, we have to come back around from this ephemeral, digital, disposable culture and return to a place where sharing something tactile with someone has value, where the physical act of sharing is the end goal. 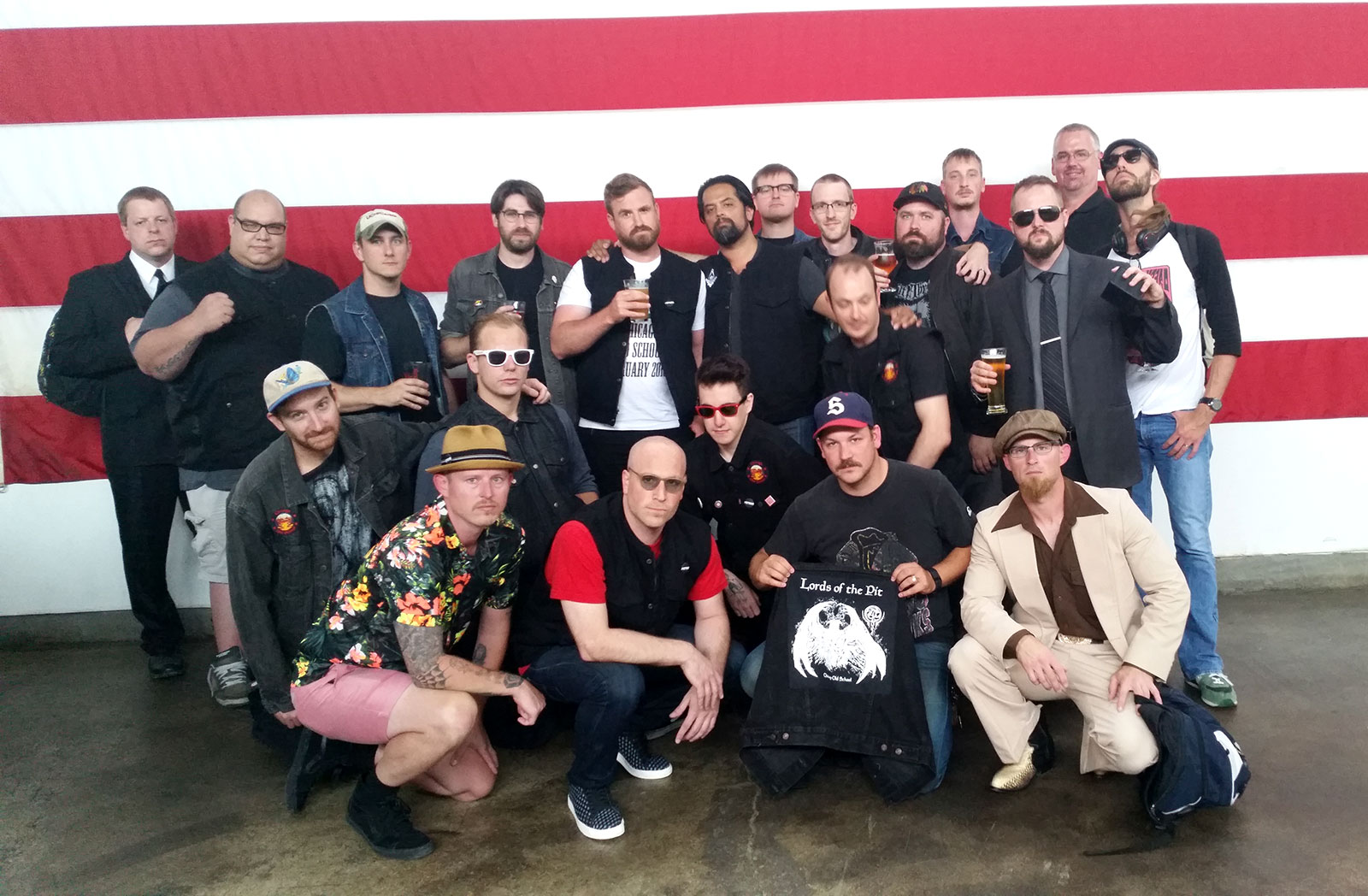 Now that we’ve grown up, we have lives and responsibilities in the real world. Bills to pay, mouths to feed and so on. Yet those early impressions and experiences from the old stores remain and the desire, the anticipation to still Gather with like-minded geeks, gamers, collectors & weirdos endures, as evidenced by the upcoming third installment of our Old School Players Ball. Thus, our community thrives, built around people and around places and around the sharing of things. They are a part of what binds us, as much as any shared creedo or worldview. We forge friendships, not find opponents. The old stores are long gone but not those early memories. You may feel it, too, when you wake up on Saturday.

You can’t go home again but that doesn’t mean you can’t take a piece of home with you. 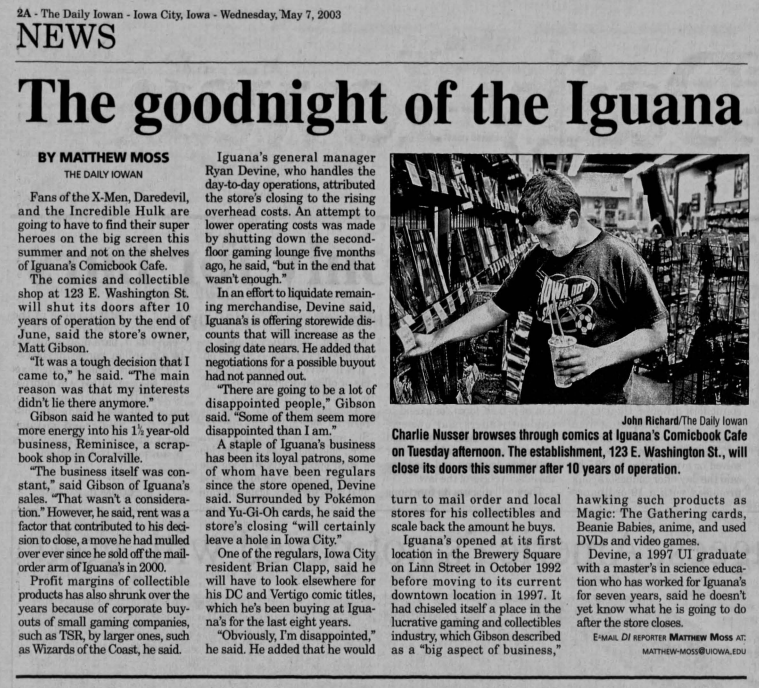 ← Bottoms Up
Pitcast - Return of the Magi →