Everyone thinks they know the Prophecy of Rhuidean, but what they know is what Wise Ones and clan chiefs have told them for generations. Not lies, but not the whole truth. The truth might break the strongest man. In this case, the whole truth, the truth known only to Wise Ones and clan chiefs before this, is that you are our doom. Our doom, and our salvation. Without you, no one of our people will live beyond the Last battle. Perhaps not even until the Last Battle. That is prophecy, and truth.

~ The Prophecy of Rhuidean, as told to the Car’a’carn_ 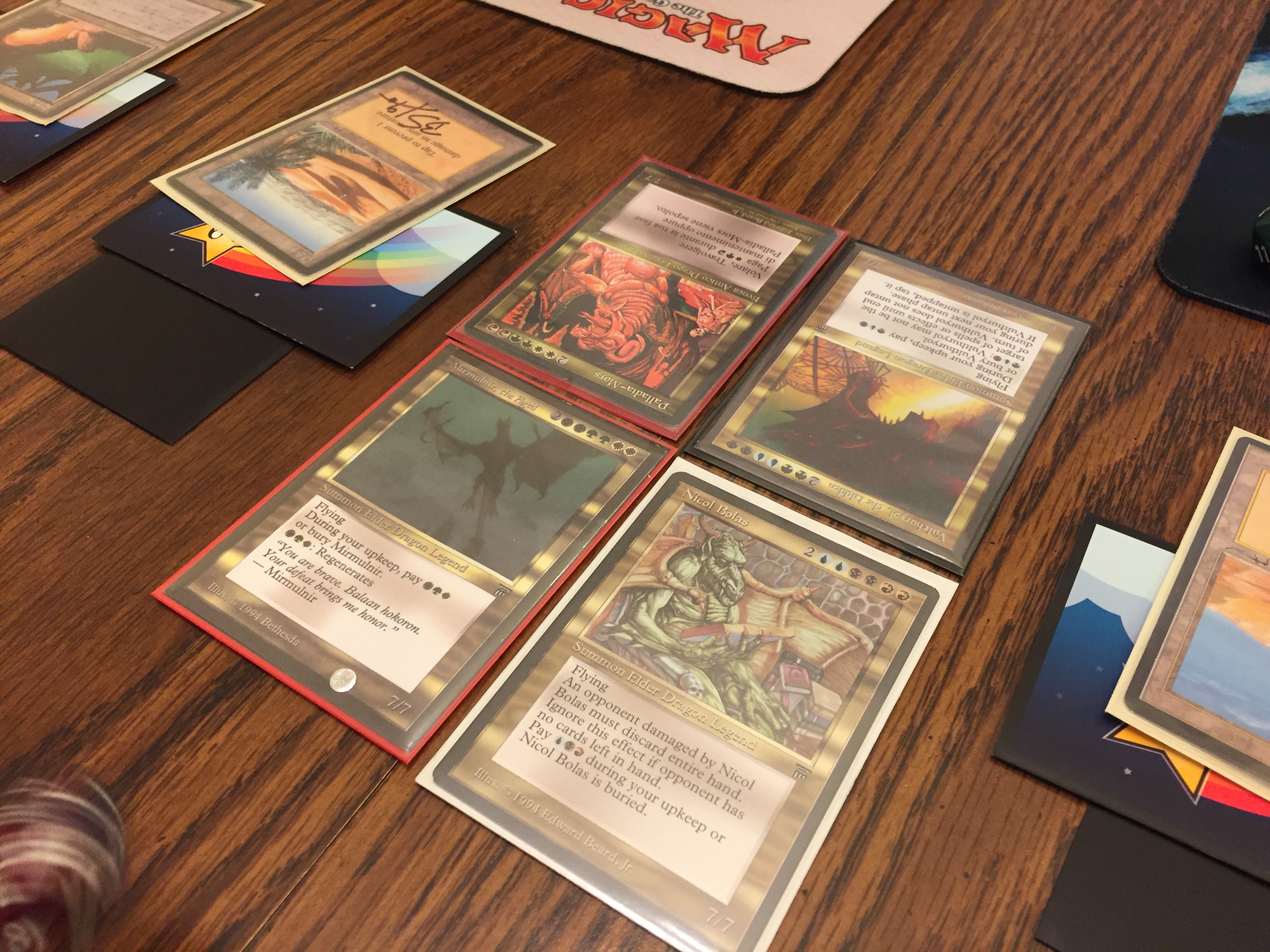 Into the unexplored & unexplained we delved. Gathered on this damp, autumn evening, with winter’s chill threatening outside, we sought the knowledge and glory lying deep within the Dungeon of Doom. Four Mages we were, intent on capturing forgotten treasures, summoning forbidden monsters and defeating fearsome foes enroute to Total Victory: 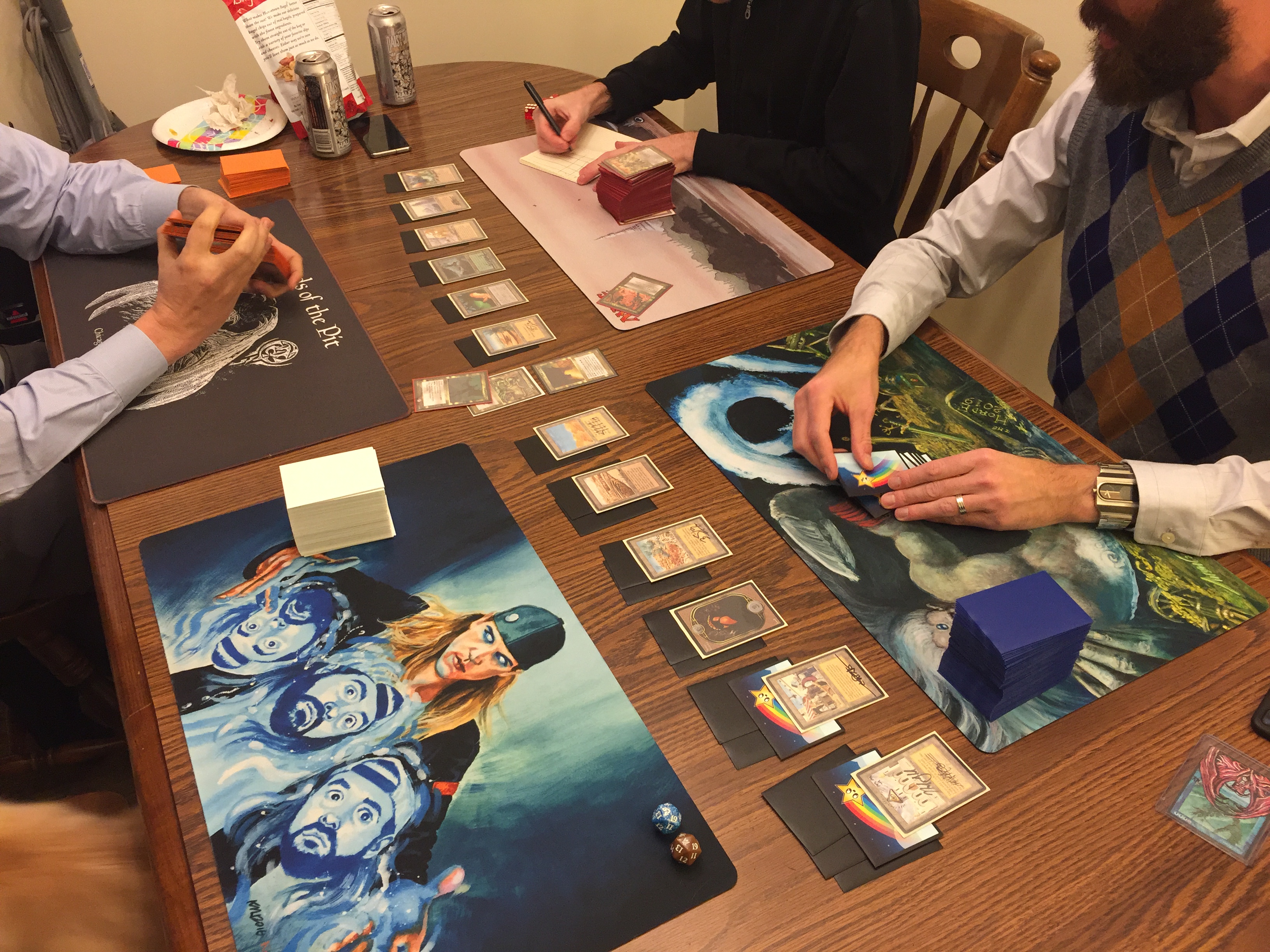 I. The Dungeon of Doom, Briefly

Historically, our games of OS-EDH have marginalized creature-based strategies. The most consistently successful gameplans in our contests have revolved around either combos (Power Monolith or Time Vault) or prison-based strategies using powerful enchantments to warp the game (Power Surge or Manabarbs). Creature-based strategies have been entirely shunted to the side primarily because there is so much effective creature removal, both en masse and targeted, within the Old School card pool. There are also many creature-based neutralization options to draw on (Preacher, Willow Satyr, Royal Assassin, to name a few). Couple these harsh realities for creatures with the fact that, inversely, there are so few options to attack enchantments, and the result is that a zero creature-based plan may be the most optimized way to build an OS-EDH deck under our standard rules.

With this in-mind, we decided to use a top-down game design to force the issue of creatures. We drew inspiration from the Djinn-Efreet War, originally featured in InQuest (Issue No. 2, June 1995) and later re-explored by Eternal Central here and here, and created a “mini game” within our OS-EDH game.

(Note that both InQuest and Eternal Central used this concept to augment an Emperor game, emphasizing team tactics, while we maintained a wide-open, PVP setting. Furthermore, the original Djinn-Efreet War was heavily oriented toward the Arabian Nights set, and while we retained much of that flavor, we opened up our own Dungeon of Doom to include cards from all Old School era sets.)

Within our mini game, our players could accrue Victory Points by attacking into a zone (a.k.a. the “Dungeon”) consisting of twelve Resources each protected by Guardians and containing Traps or Treasures. Defeating Guardians and capturing Resources would result in accruing Victory Points on a sliding scale of one to three. The Resources took the form of various Lands cards from Old School sets, which served as our “locations” within the Dungeon. The Guardians at those locations would begin the game face-down so players wouldn’t know what to expect until they explored by attacking. The Guardians ranged in power from the lowly 2/2 Scavenging Ghoul to the tougher 6/4 Craw Wurm. Being an early mover could give a player a valuable advantage… or it could simply result in creatures lost for nought. Not only would players be awarded use of conquered Resources (for example: using a conquered Oasis to reduce damage to creatures in future combat), but they also revealed a randomly-assigned Trap or Treasure card, one per location. Treasures were inspired by “Old School Equipment” such as Zeylon Sword or Kry Shield; these items could further enhance creatures’ prowess in combat. Traps, meanwhile, would decrease creatures’ combat effectiveness, and took the form of Auras such as Brainwash or Paralyze. Victory Points could alternatively be earned by defeating rivals, meaning a mage had to pick and choose when to attack into the Dungeon, when to attack opponents, and when to protect their flank. The first player to collect ten Victory Points would win.

(For a full detailing of the in-game mechanics, you can read our white paper here. We will update these rules from time to time as we gain additional insight.) 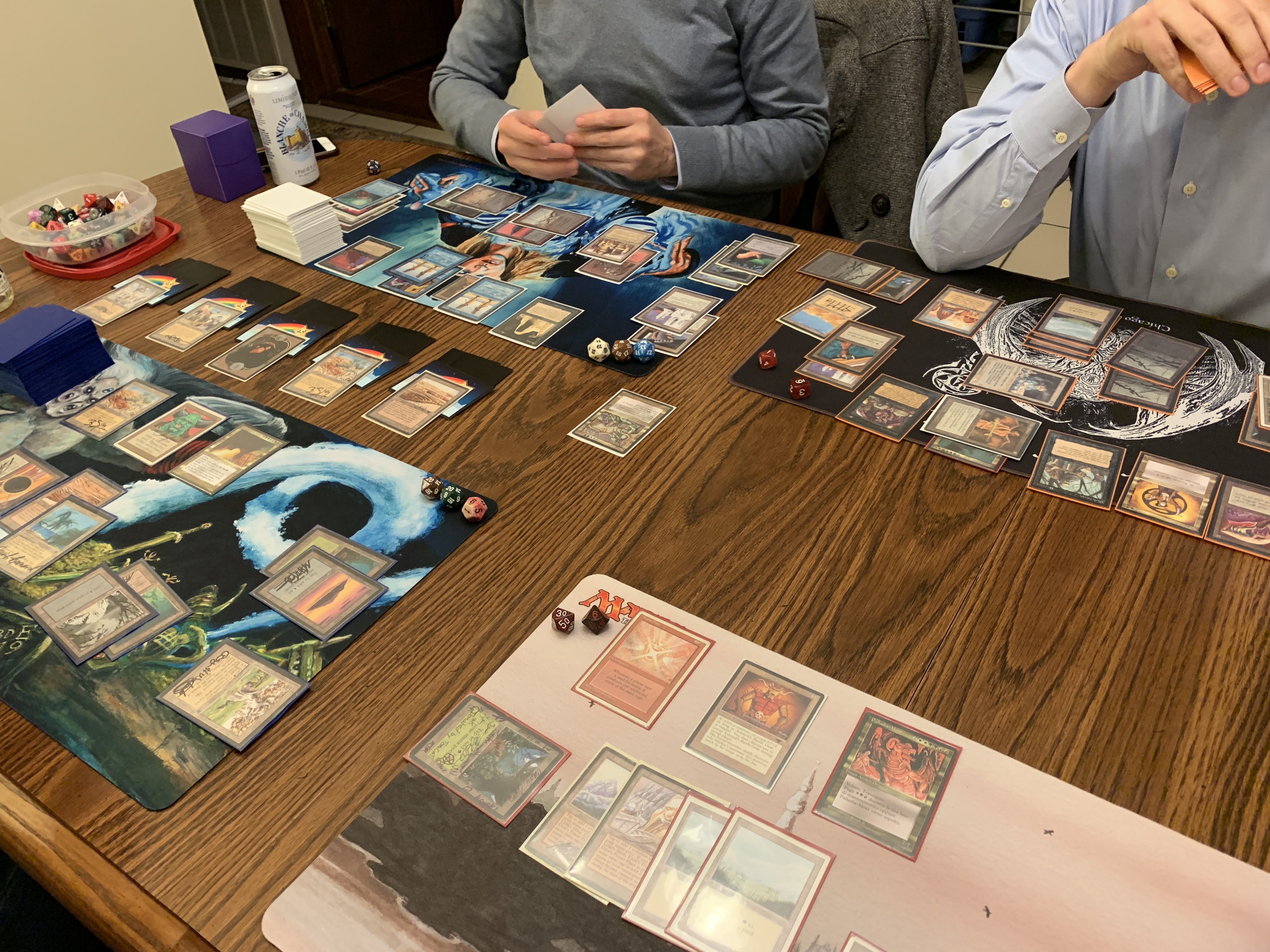 Lord Semmens arrived to Moss’ Logan Square stronghold at 6 p.m. bearing a gift, an entire Dante’s pizza, to share, perhaps for the purpose of lulling his enemies into a false sense of security. The wizards assembled and gnoshed, engaging in small-talk about the uncertainties of the forthcoming game. We expected to see many more creatures than in games past, but beyond that we were unsure how this concept would function in the “real” cardboard world. Lords Moss and Etters laid out the Dungeon cards across the center of the table, in escalating order of Victory Points value. Etters had the high roll, and we commenced… 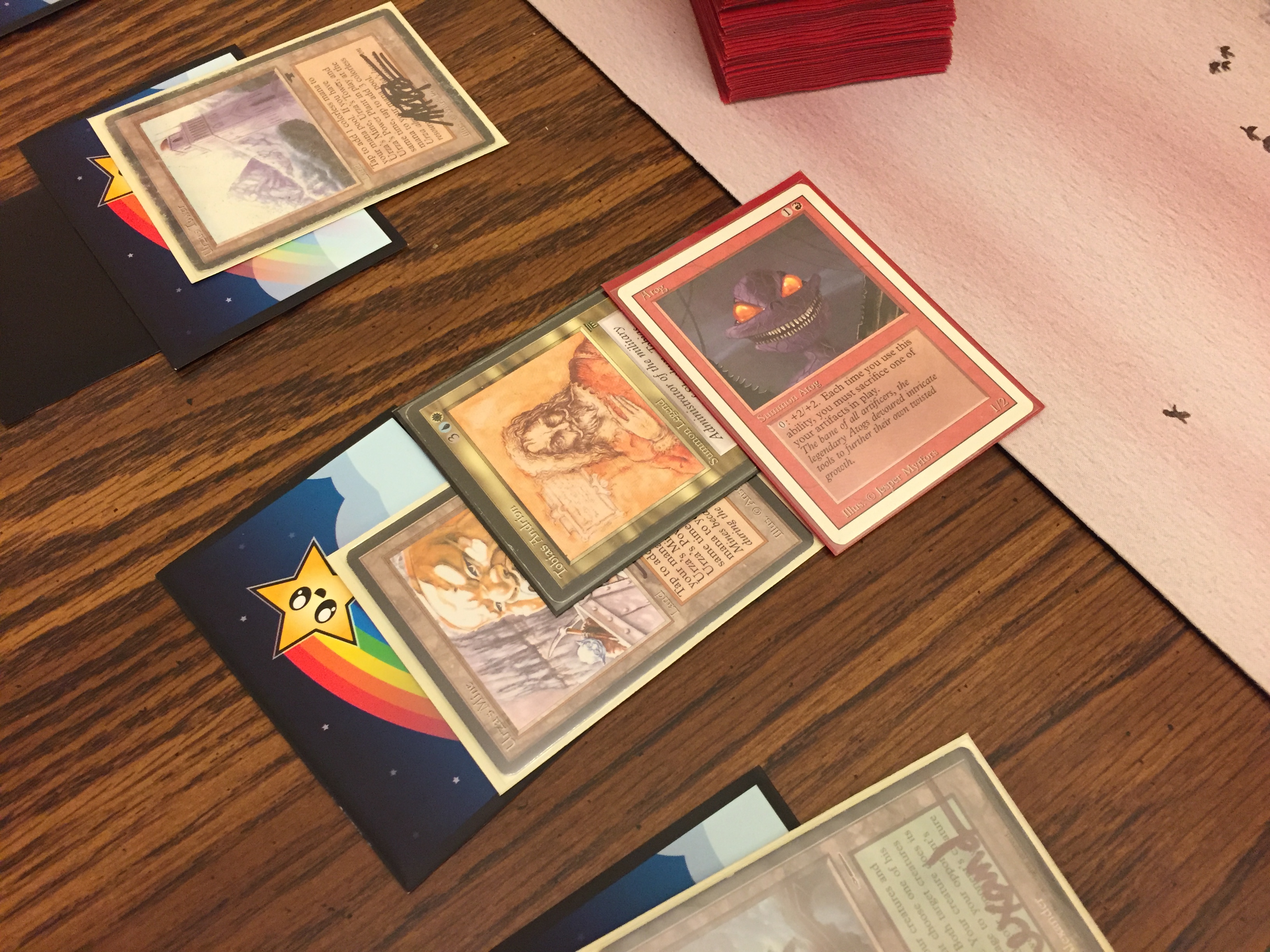 Etters summoned an Atog and dove headlong into the Dungeon on turn three. The seal was broken! Atog attacked Urza’s Mine and Etters revealed our first Guardian: Tobias Andrion! The U/W legend easily crushed the grinder’s best friend. More creatures hit the table. Etters curved out nicely with Serra Angel on turn five and Shivan Dragon on turn six. Semmens Cloned the Angel. Moss Cloned the Cloned Angel. Lord Schriver built up his own peculiar board featuring Uncle Istvan and Helm of Chatzuk. He clearly had some madcap scheme in-mind. Back to Etters, who doggedly assaulted the Dungeon capturing all three pieces of Urzatron! Moss’ attempts to break up the trio was defeated as Cloned Serra and an Air Elemental Guardian annihilated each other at Urza’s Power Plant. Clockwork Beast then found Riven Turnbull at another Urza’s location, but Moss sacrificed the Beast to Diamond Valley rather than have a second double-KO leaving the Resource unguarded. Etters racked up Victory Points via the Urzatron, Diamond Valley and Bazaar of Baghdad. He hoarded Treasures to equip his creatures: Kry Shield, Runesword, Tawnos’ Weaponry and Ashnod’s Battle Gear. At so many trips to the slot machine, he was coming up all-sevens, but the target on his back grew and grew. Etters’ attack on the Bazaar of Baghdad was particularly fortuitous, as Palladia-Mors (or was it a 13/13 Angry Mob equipped with Tawno’s Weaponry?) handily defeated a lowly War Mammoth and Bog Wraith and the Naya wizard collected two Victory Points and a nice engine to draw cards. Then, following a devastating Balance leaving the crew at zero creatures and zero cards, the conclave struck back, carving up Etters with wave after wave of Wasp token attacks from Semmens and Moss. In a desperate gambit to gain life, and in response to Moss’ Willow Satyr target, Etters used Kry Shield, Tawnos’ Weaponry and Diamond Valley to net 16 lives from his commander, the venerable Palladia-Mors. The assault continued, aided by Moss’ underwhelming 2/2 Nightmare and Schriver’s Scarwood Bandits. The blitz was stymied and Etters was defeated holding eight Victory Points. 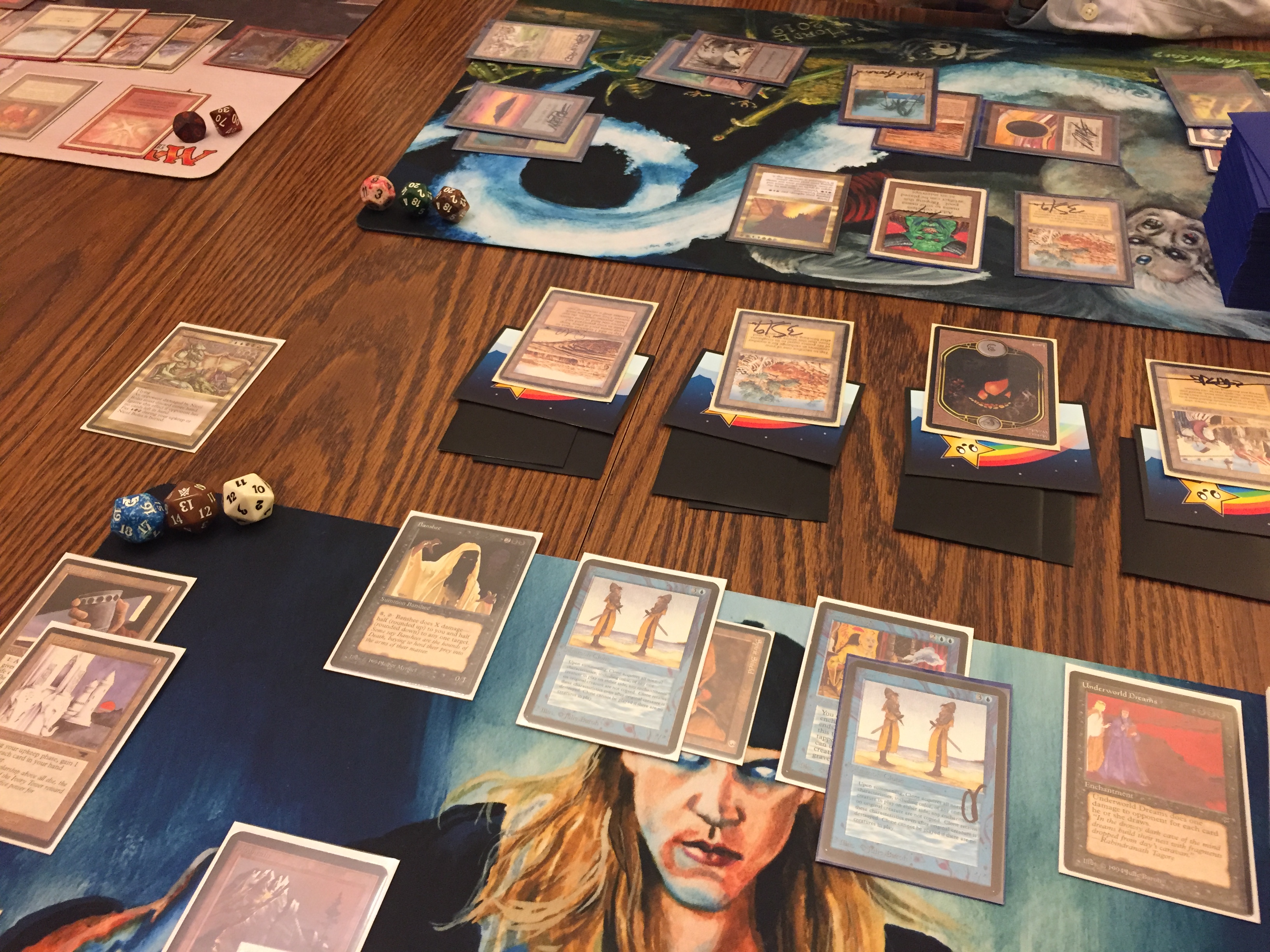 Approximately 90 minutes in, we stood at three players. Moss held three Victory Points after defeating Etters. Schriver held one Victory Point from the Dungeon. Semmens led with five Victory Points and one location remaining, the infamous Library of Alexandria (as protected by Mijae Djinn, Barktooth Warbeard and Jasmine Boreal having an immense 16/13 aggregated power/toughness). Moss attacked the Library with a swarm of 1/1 Hivelings and Tetravites and 0/1 Nathan (read: Thrullen) tokens, the entire host lead by the mighty Sol’Kanar the Swamp King, stolen by Moss from Semmens via Willow Satyr. But the BUG wizard’s forces were thwarted by Schriver’s Maze of Ith, which removed the King from combat, resulting in only two Guardians’ (Mijae and Barktooth) destruction at the Library. The host of tokens were obliterated in the battle. The turn then passed to Semmens, who defeated Jasmine, captured the Library, cleared the Dungeon and paced the remaining trio at eight Victory Points. Semmens would have to defeat either Schriver or Moss to win, however. 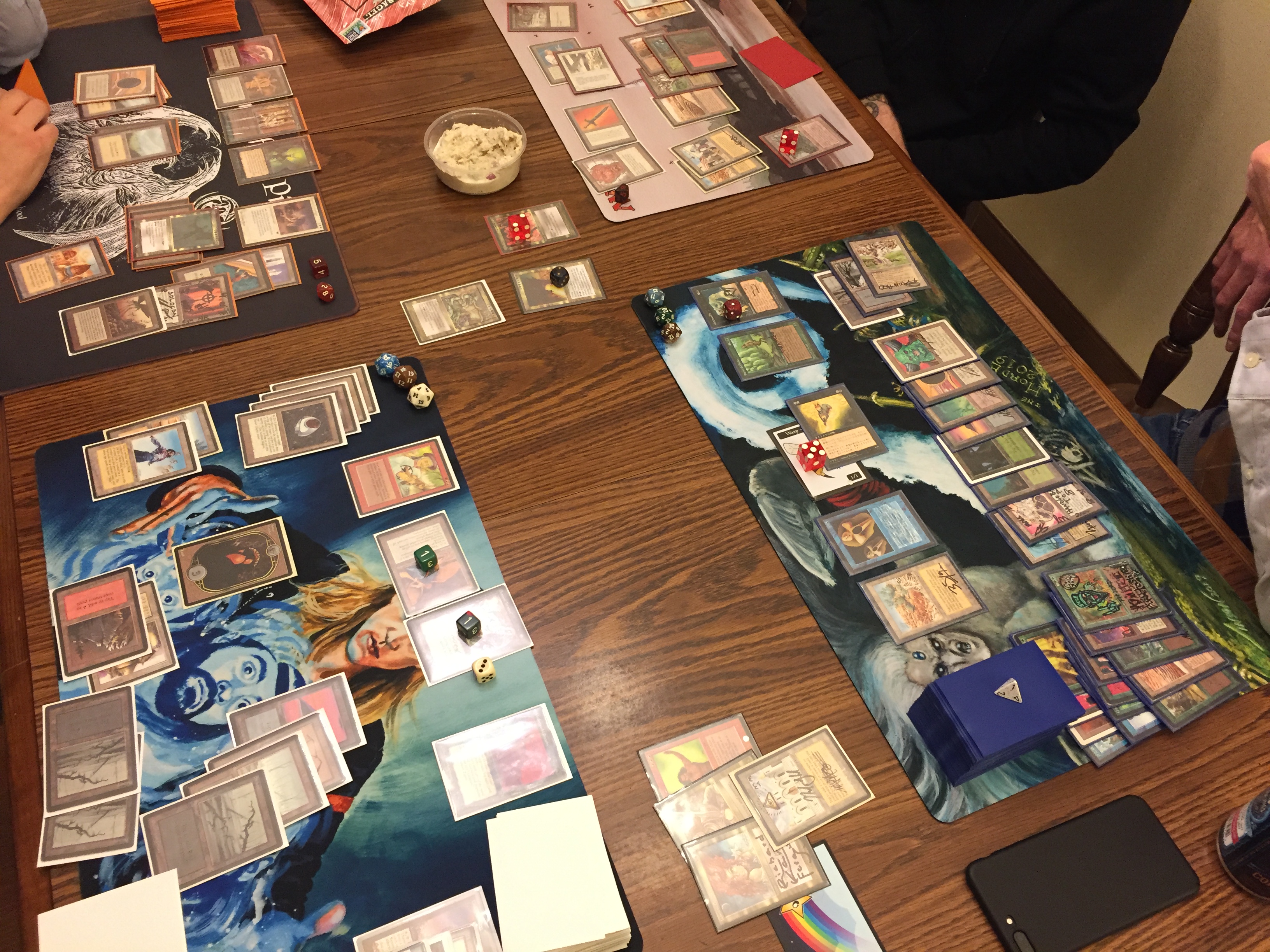 We rolled past the two-hour mark in the game. We’d spun through several entire records, Iggy Pop’s The Idiot, David Crosby’s If I Could Only Remember My Name, and Paul Gilbert’s Fuzz Universe, before moving onto Apocryphon by The Sword. Semmen’s Nevinyraal’s Disk had obliterated the battlefield. The end did was not in-sight. Moss paced the trio with 60 lives before converting that total into cards via Sylvan Library. Schriver rebuilt an impregnable position using Greater Realm of Preservation, Maze of Ith, Island of Wak Wak, Preacher, Singing Tree, Witch Hunter and Icy Manipulator to turn back any attack. After perfecting such a fortress, it was time for a win-con, a particularly wretched win-con: The Wretched. First, Schriver enchanted this unassumingly terrible card with Regeneration. Second, the now slightly less-terrible card was enchanted again, with Lure, creating a terrifying monstrosity. Third, that monstrosity attacked Moss, regenerated in-combat, and stole all of his blockers. Moss’ poor Sea Serpent was unceremoniously destroyed by the oft-overlooked Islandhome clause. Semmens played not one but two Mirror Universe, the first being Desert Twister’d and the second following Recall, and exchanged life totals with Moss, who was left at six. The evening’s host finally committed seppuku via Sylvan Library damage, avoiding handing three Victory Points and Total Victory to Bolas on the subsequent turn. Moss informed an enraged Semmens that he would have to face Schriver’s overwhelming board to win. 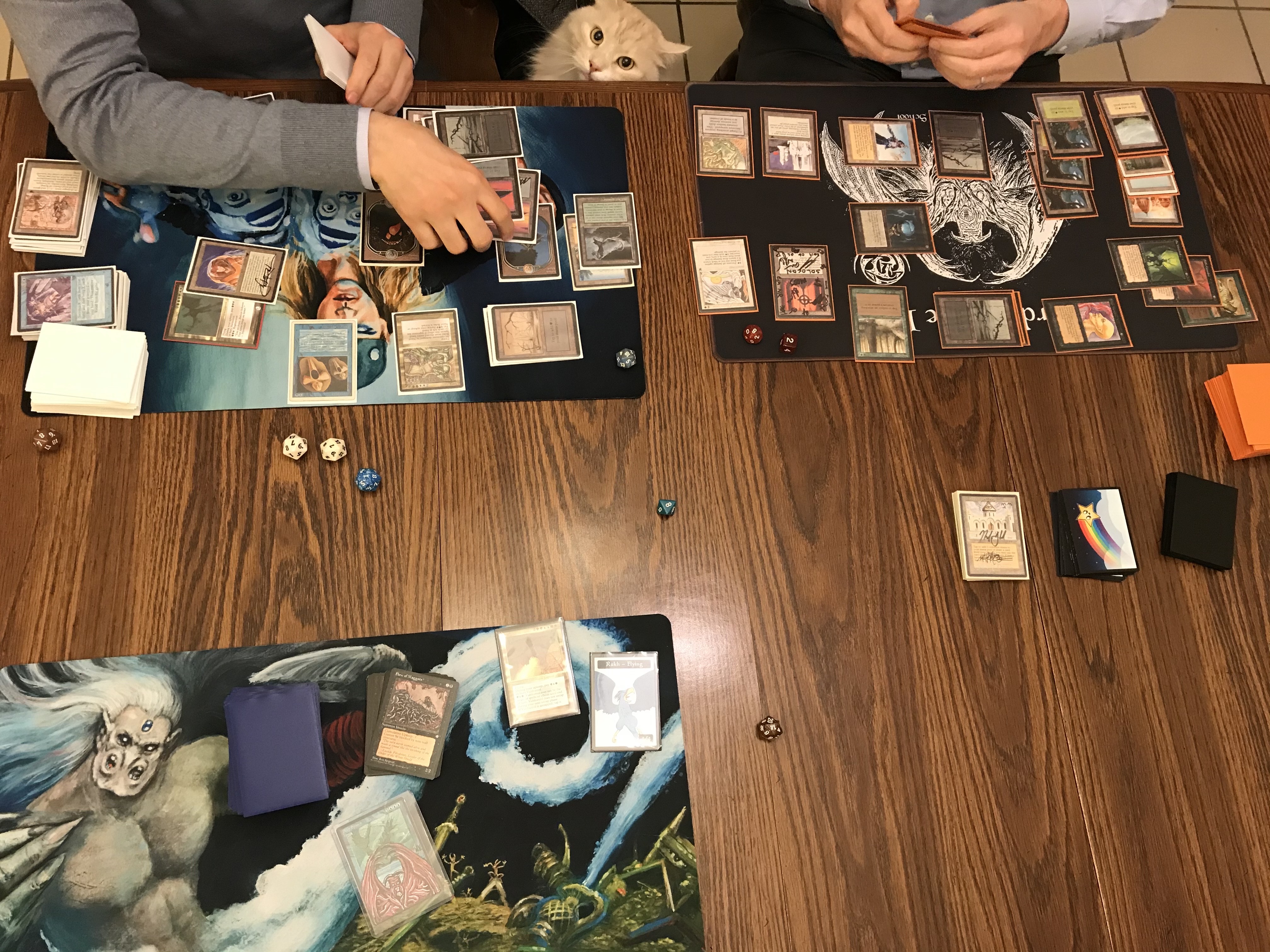 The now mano-y-mano contest continued as Etters found a feline friend and Moss the last, cold piece of pizza. For a time, Semmens staved off Schriver’s forces using Arena and Tawnos’ Coffin, but he couldn’t stem the tide forever and fell dead to The Wretched, Thicket Basilisk and Sengir Vampire. Schriver captured three Victory Points, going from one to four. He was the last wizard standing and… what exactly?

At approx. 9:15 p.m., with no wizard achieving a Total Victory, our game concluded thusly:

We determined Schriver to be our inaugural Dungeon of Doom “winner,” while it seemed that Etters and Semmens had most-played the game the “intended way.” Moss primarily enjoyed playing spoiler to Etters and riling up Semmens while executing a large number of punts. 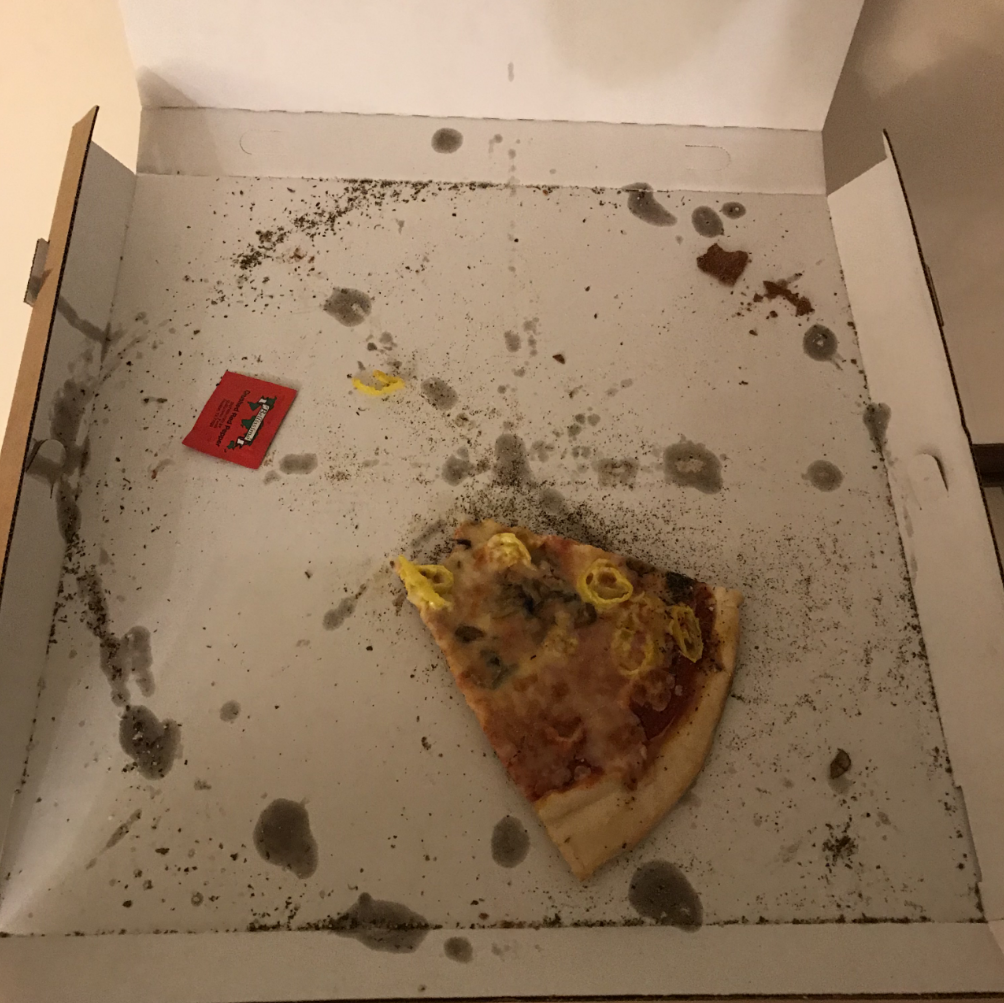 So what were our takeaways? What lessons did we learn from the slaughter, politicking, and heartache? When the dust settled, we were left without an absolute victor. Schriver, being the last wizard standing, collected only 4 VPs, while Etters (the first wizard eliminated) and Semmens had 8 VPs apiece. By falling on his own sword, Moss (with only 3 VP via eliminating Etters) prevented Semmens from achieving a Total Victory. But for that selfish act, the points system seemed close to deterministic. A change under consideration would alter scoring so that instead of assigning 3 VPs for eliminating an opponent, players would acquire the VPs of their vanquished foes. This would create a truly deterministic outcome and speed up the game considerably. Another play-through will arm us with more data to consider.

The slot machine-like element of attacking into unknown Guardians and revealing Traps & Treasures added an exciting layer of entertainment. It seemed Etter’s hyper-aggressive stance was rewarded until the field ganged up to stop him. Our collection of Guardians felt a tad under-powered, with a few too many 2/2 and 3/3 baddies, and we may investigate upgrading their power level somewhat before the next game.

Perhaps the most enduring takeaway from this evening is appreciation for the ingenuity and creativity (and depravity) our OS-EDH players continue to pour into this game as we experiment and explore the uncharted Shores of Imagination. 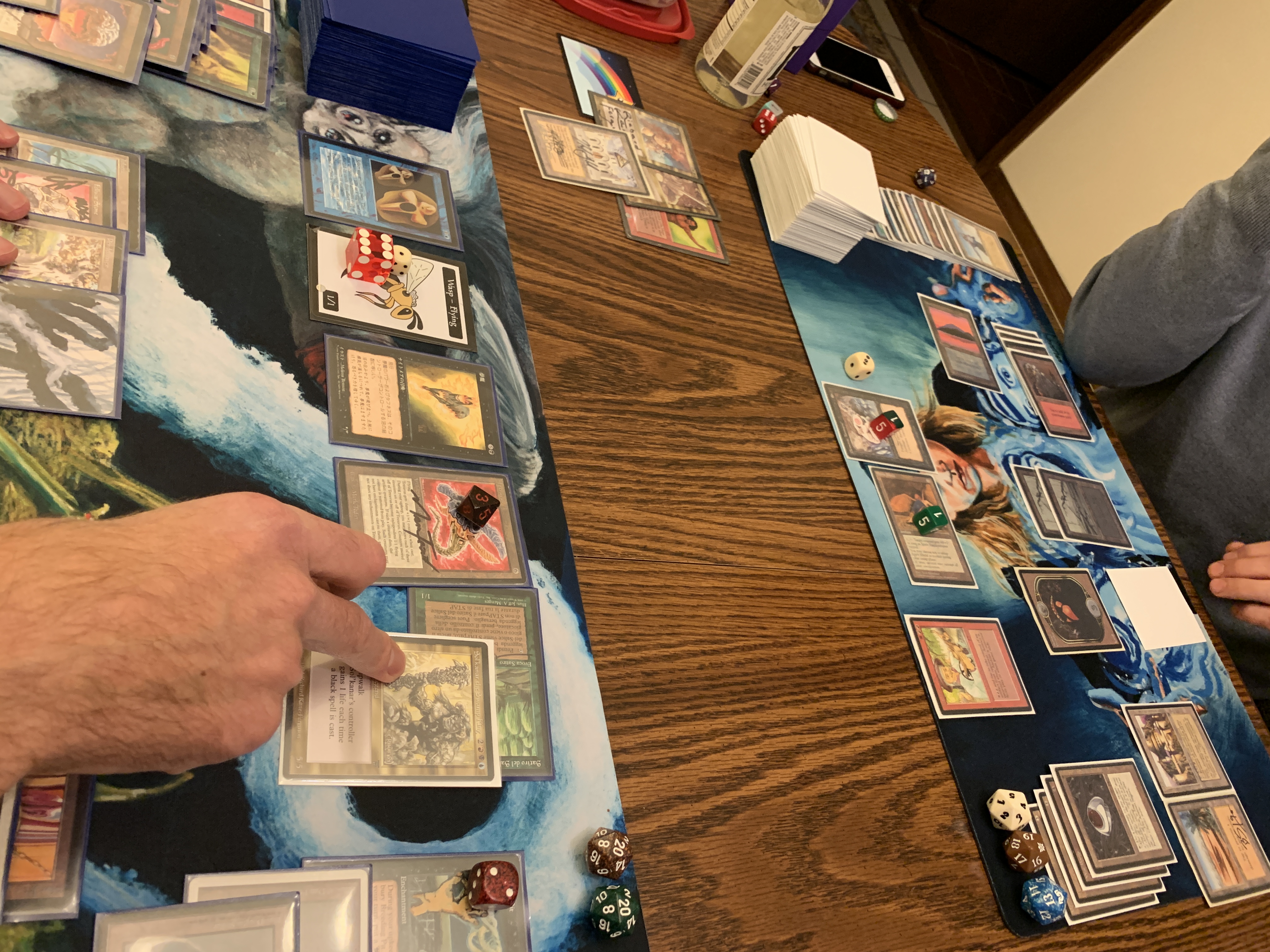 What would this report be without a role call of the siqqest creatures that saw battle? There were many to name this evening: 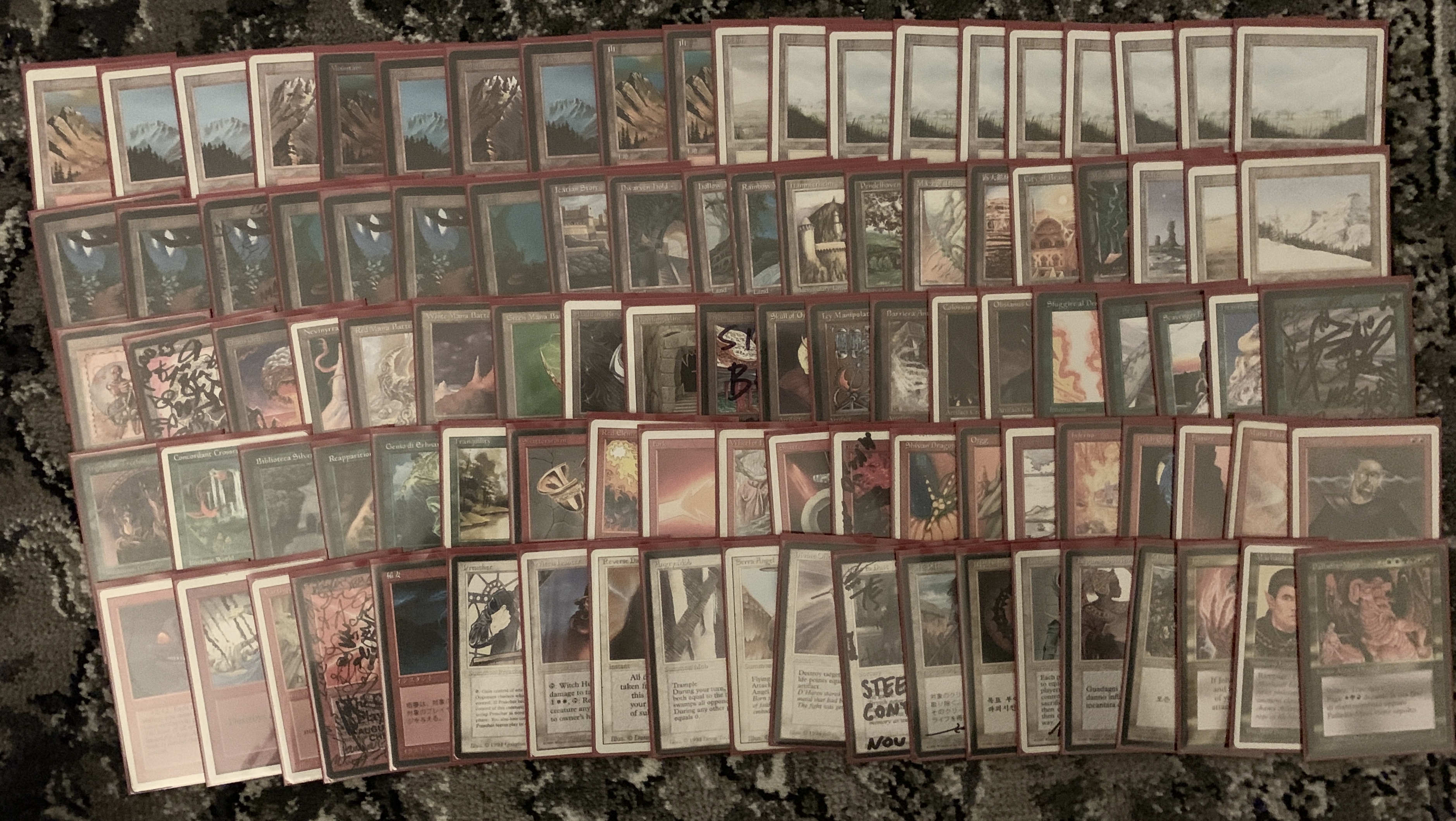 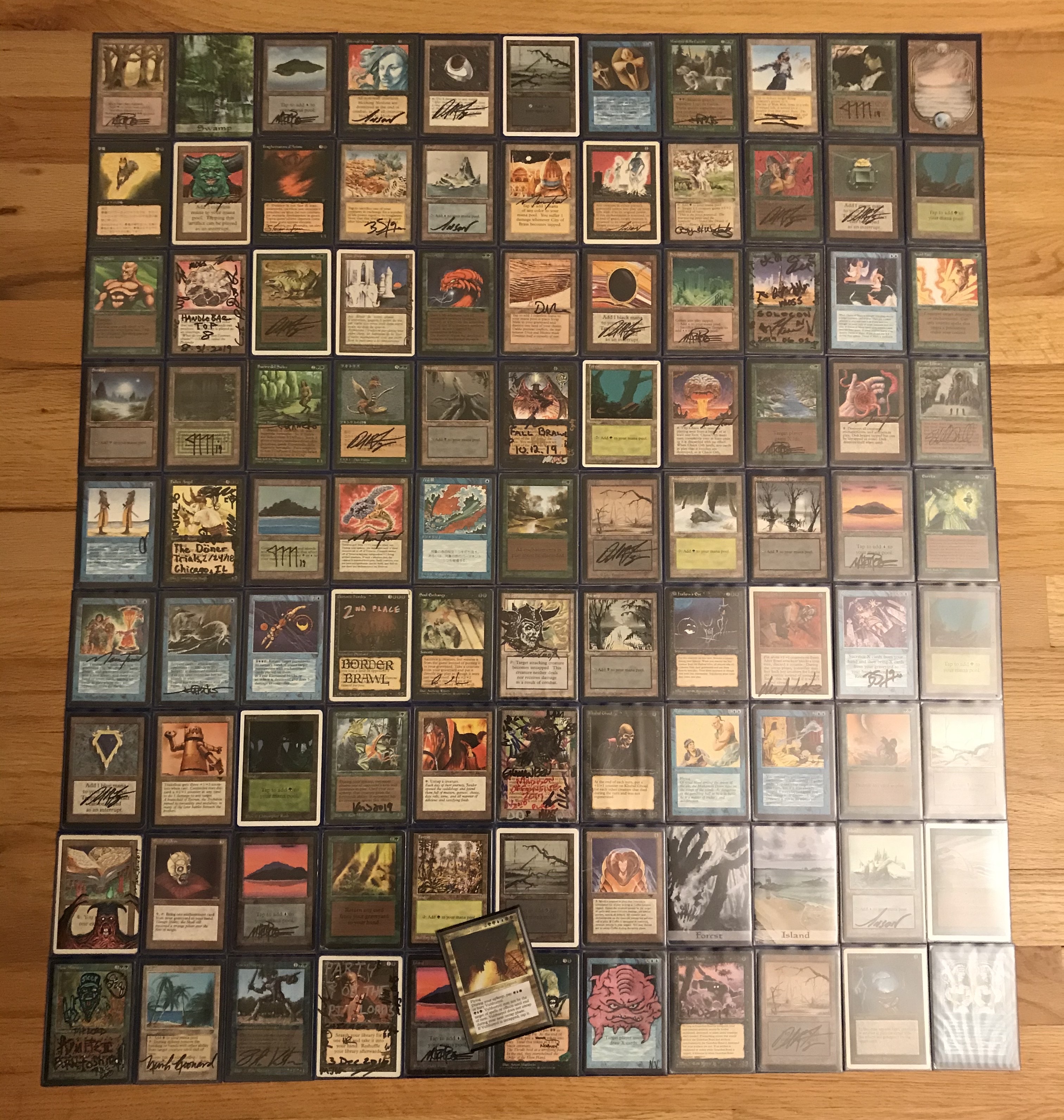 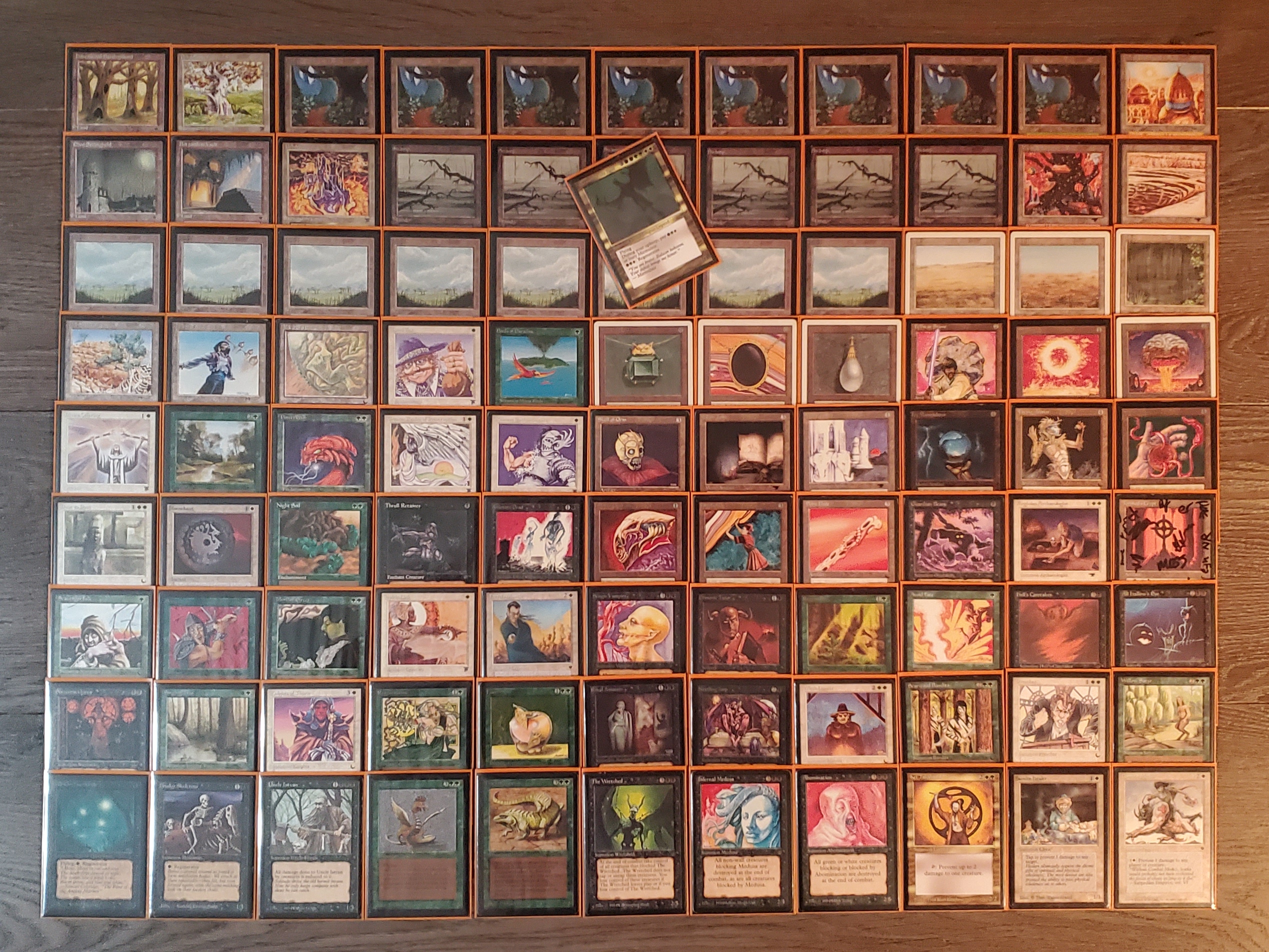 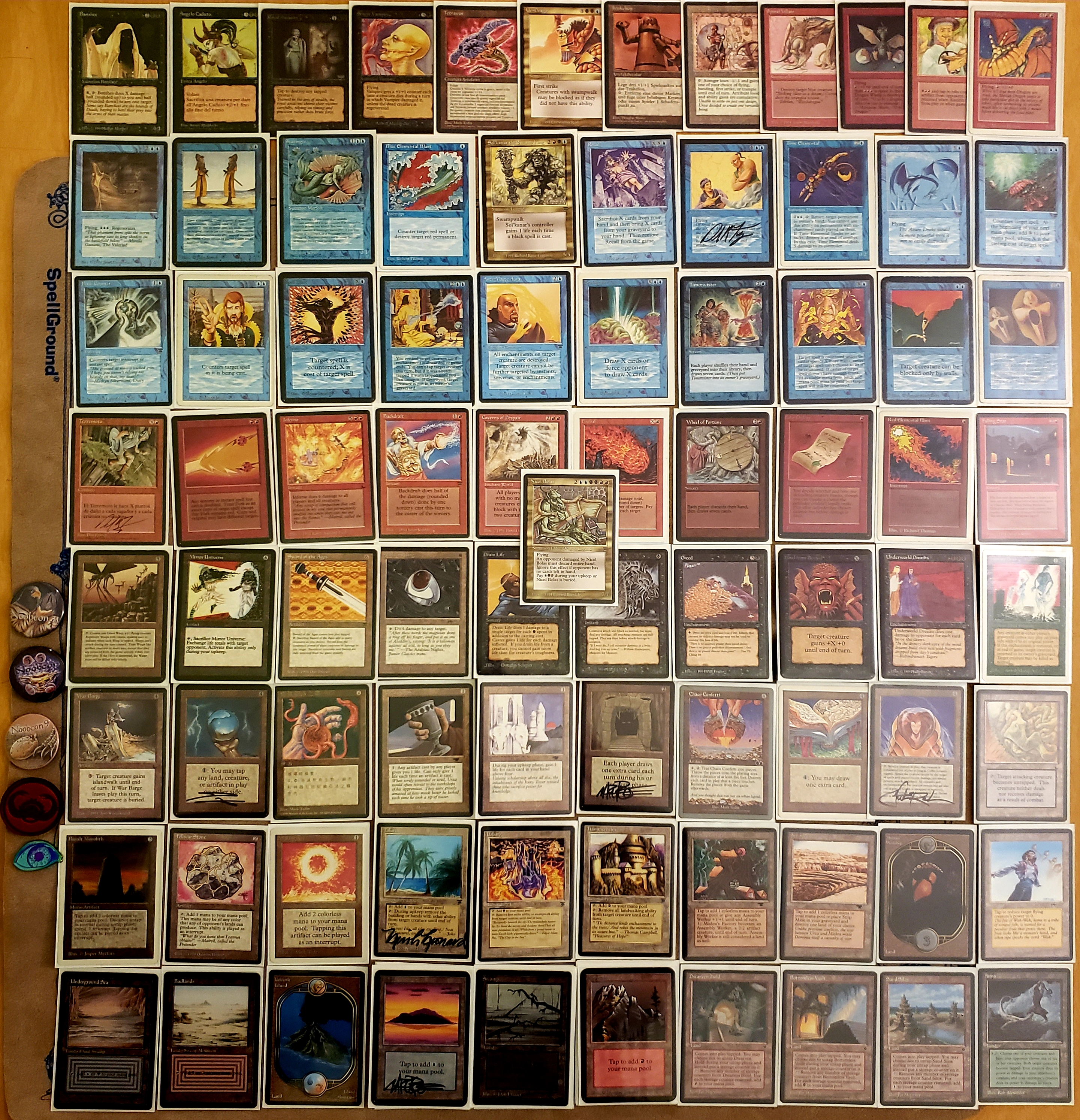 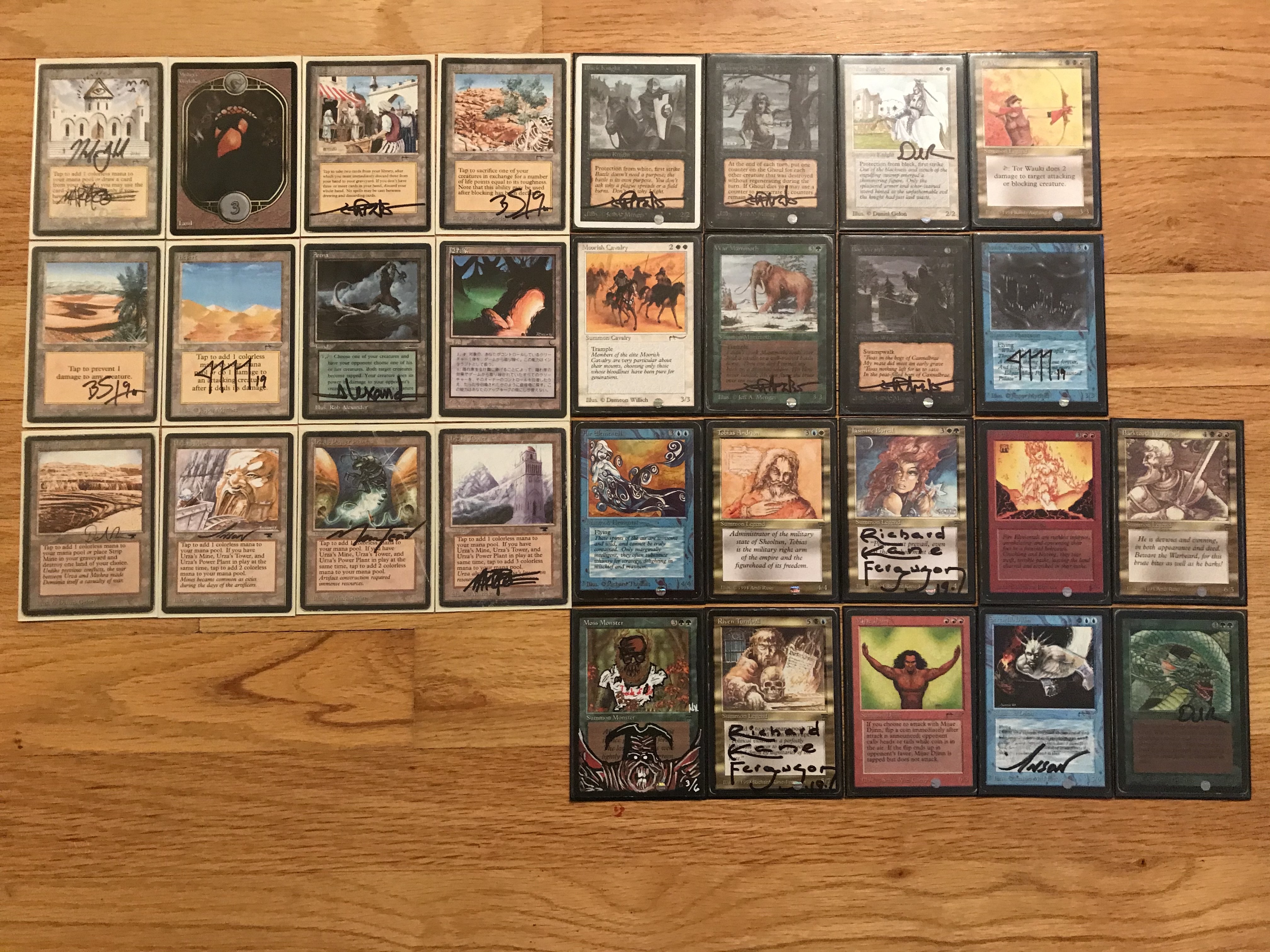 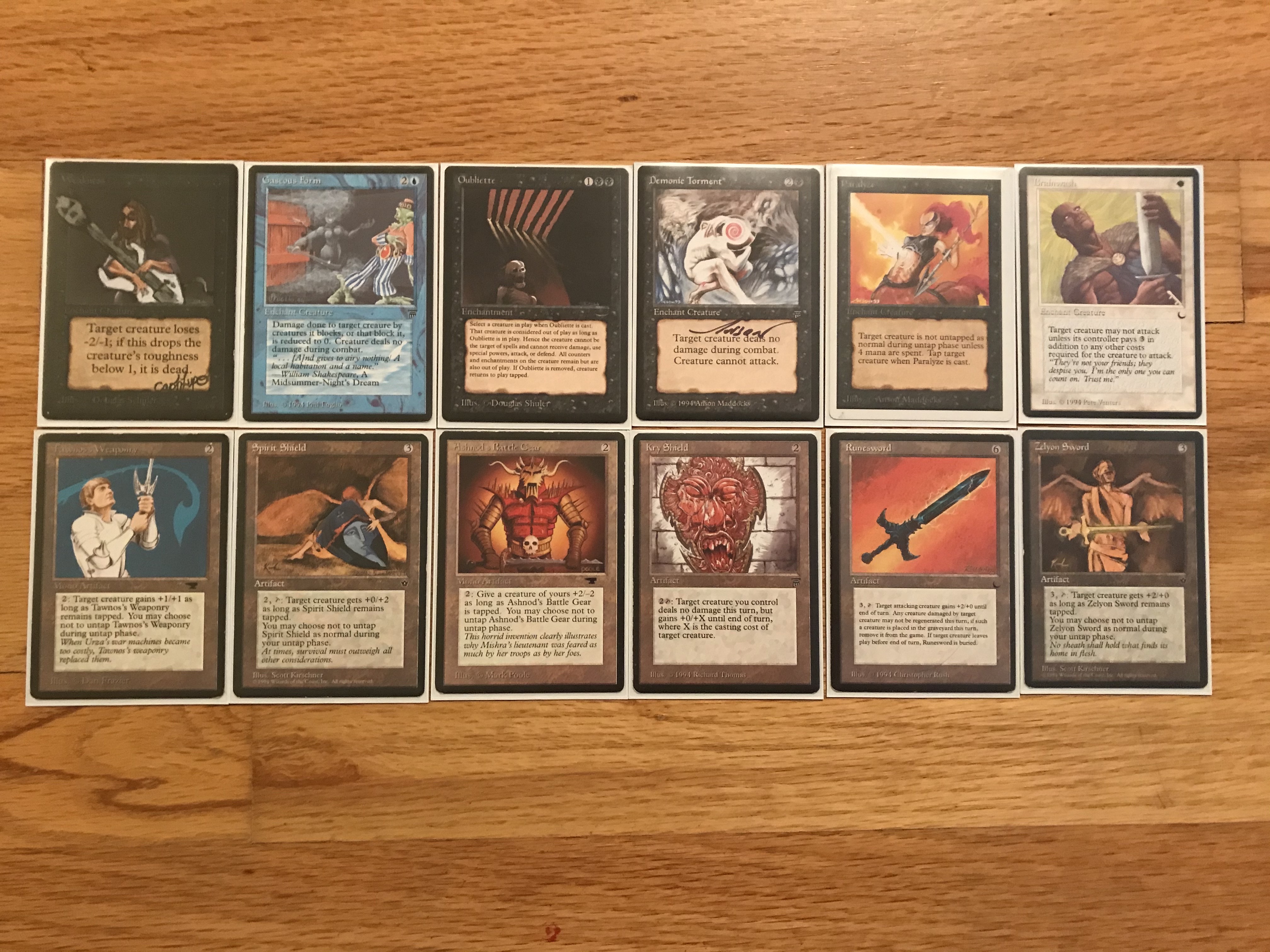 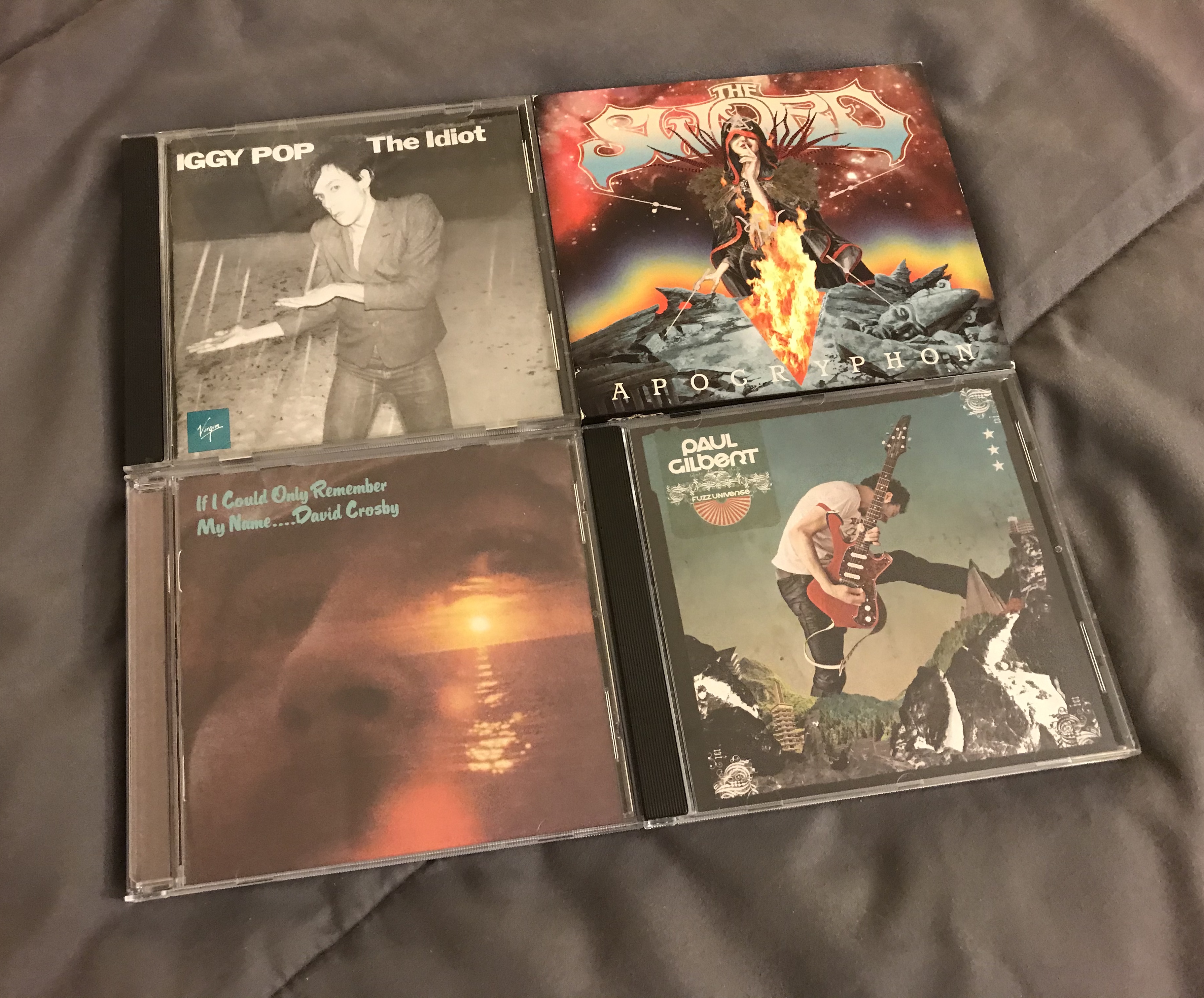 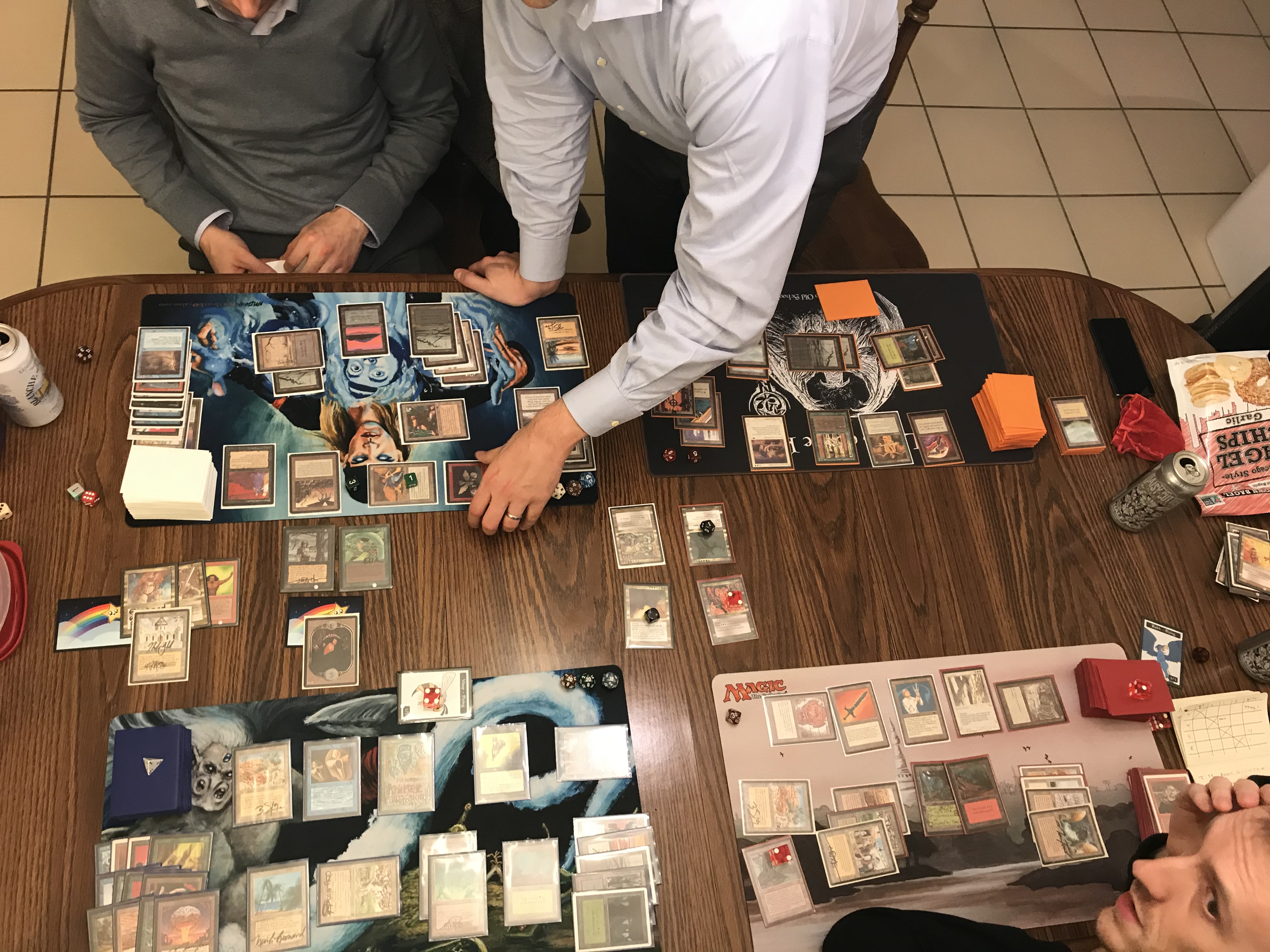 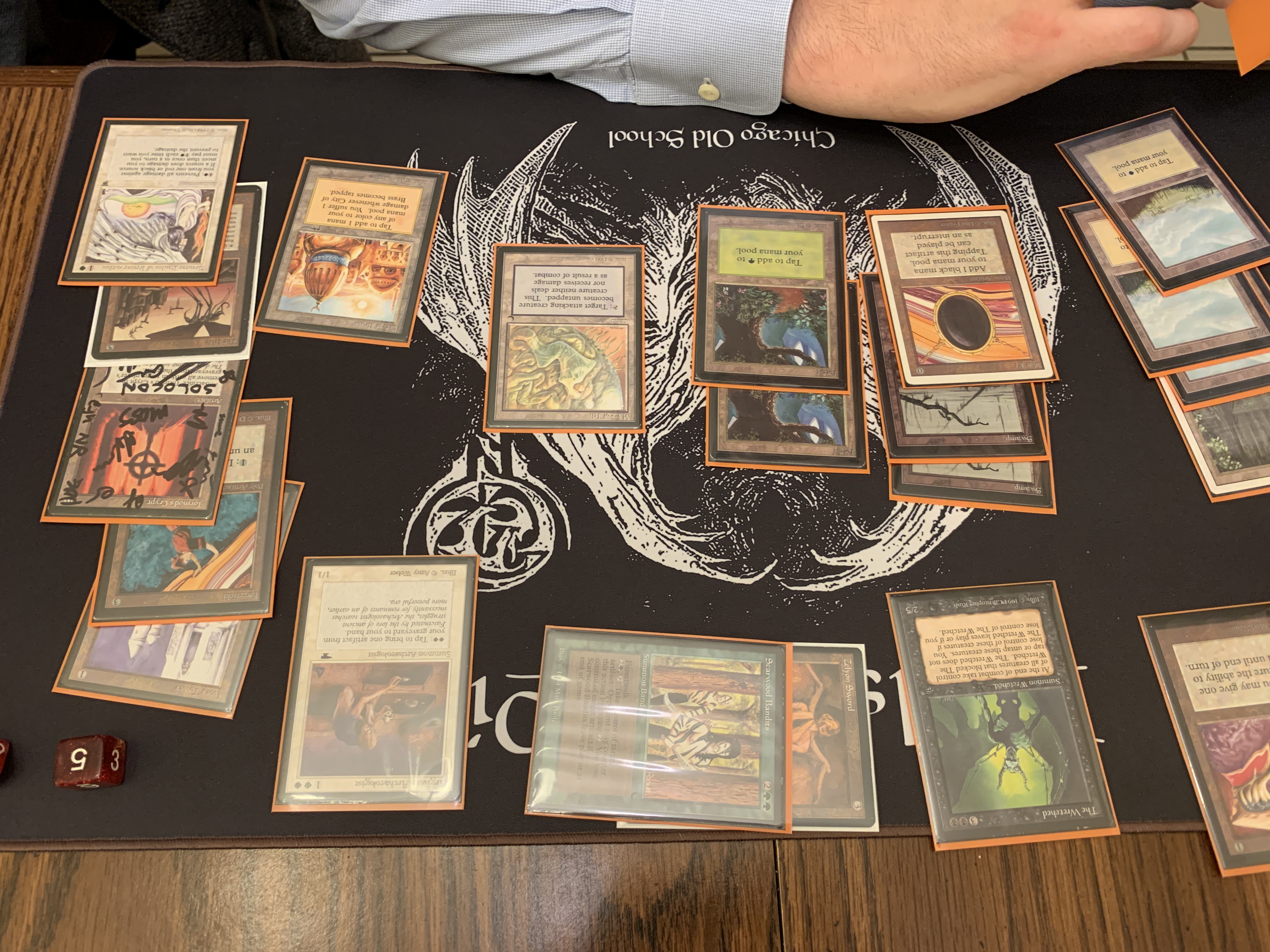 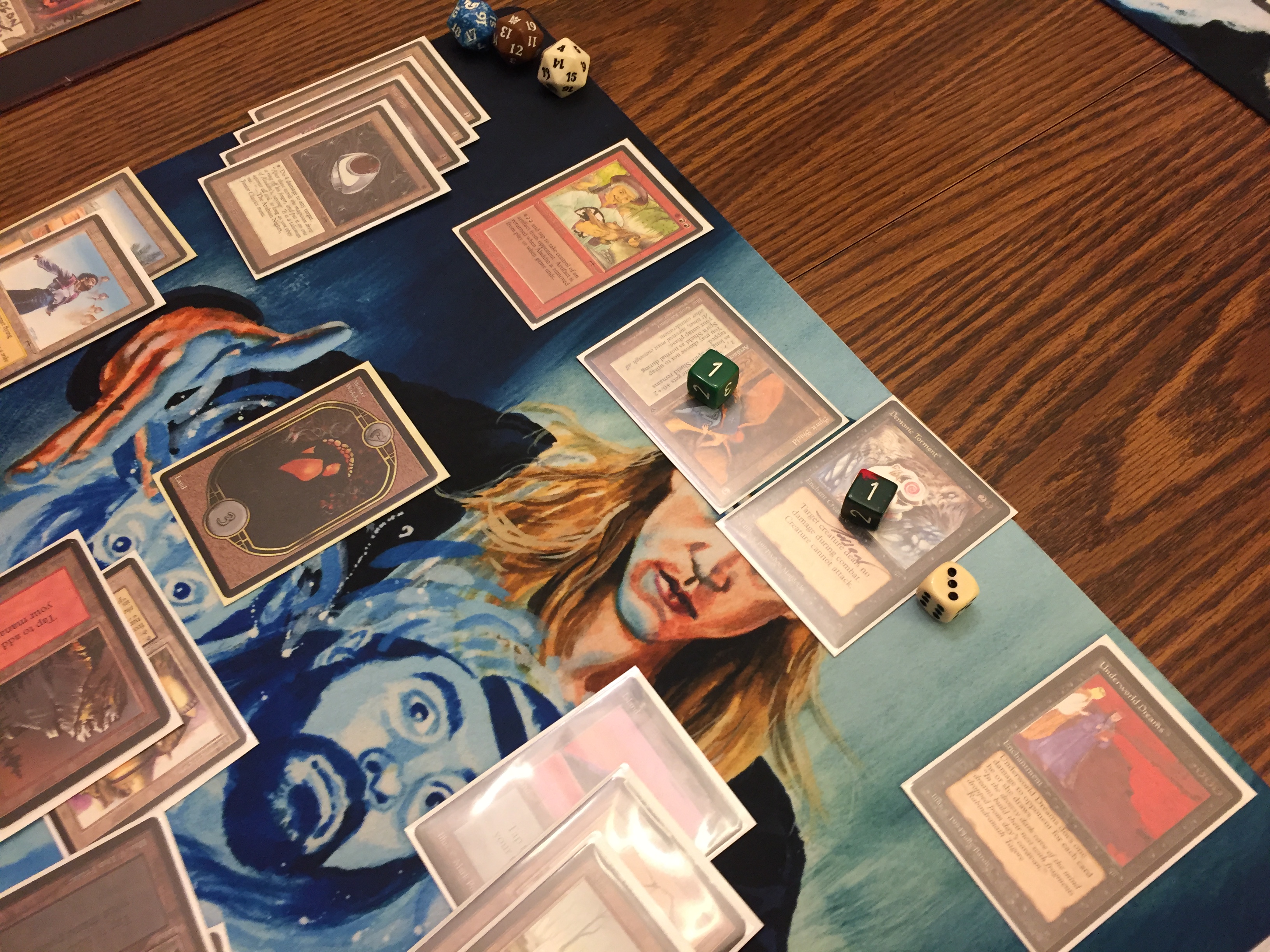 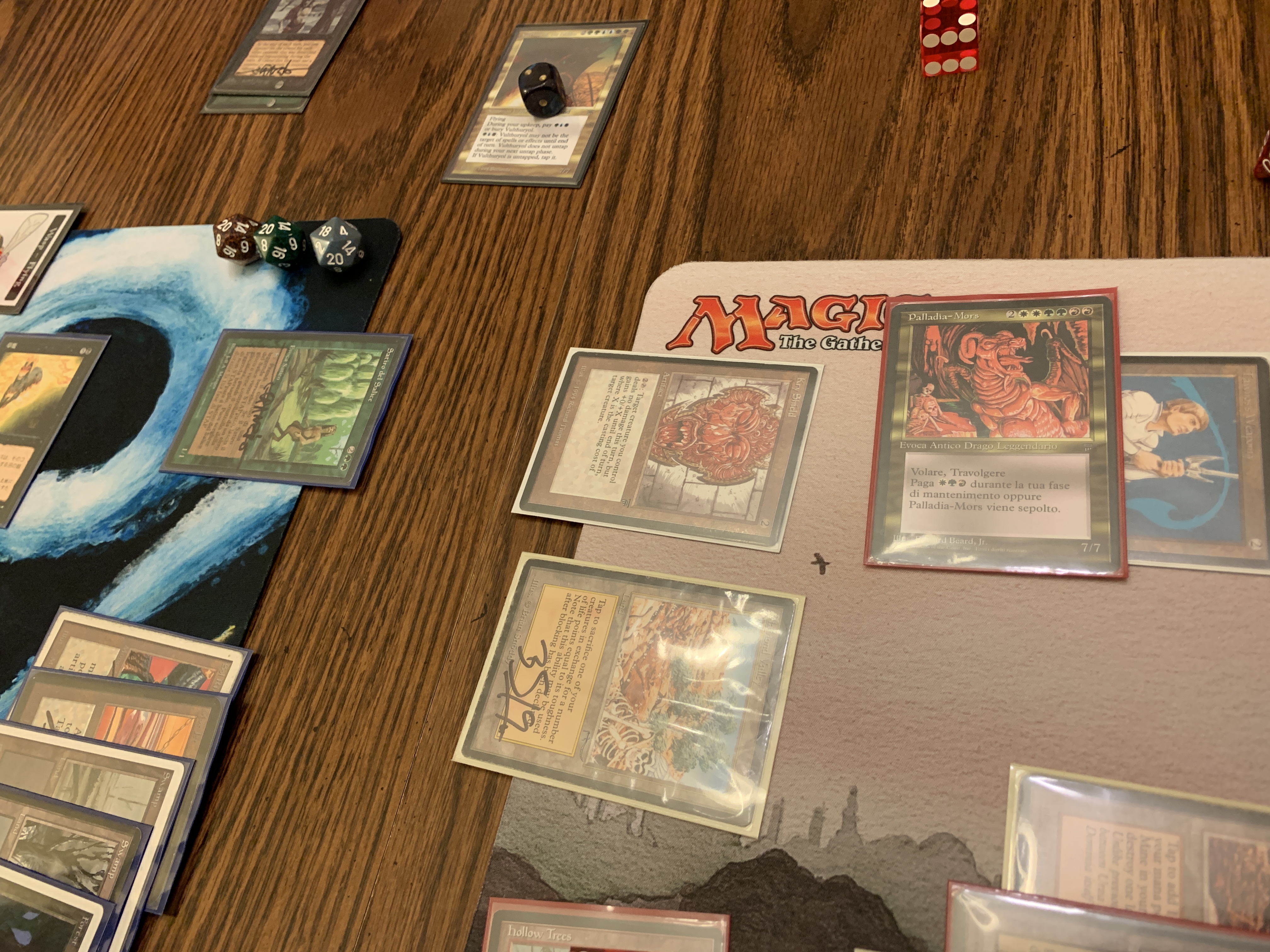 ← Pitcast – Shot Through the Heart
Go With the Flow →